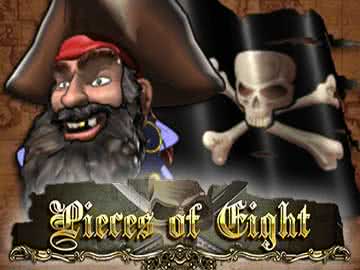 The Pieces of Eight video slot by Saucify is a pirate-based game that’s one of their most popular slots with 25 paylines and a free spins feature.

Pirates have been found in a variety of different forms a media for a very long time, and the Pieces of Eight slot by Saucify captures all of the excitement that surrounds this theme. You’ll find some very good graphics with 3D elements in this game, and the background is set up to fit the theme perfectly as well. This is one of their most popular games for a reason, and it’s the super-exciting gameplay combined with the great features and top-tier graphics.

Format of the Pieces of Eight Slot

One of the most popular formats used in video slots of all time is a grid of five reels and three rows with a total of 25 paylines. That’s exactly what you’ll find with this title because they wanted a very solid foundation to build a great game experience on top of. You can play with fewer than the 25 paylines this game has as its maximum, but it’s best that you don’t. Playing with the maximum number of paylines (25) keeps your RTP percentage up high, which means better results over time.

The importance of the captain on a pirate ship cannot be understated. Everything that the crew does is coordinated based on the vision that the captain has. You’ll be having your own visions of great payouts when the captain shows up on the reels of the Pieces of Eight video slot because he’s the wild symbol, and he shows up and substitutes for everything but the two scattered bonus features, which we’ll go into detail about below.

The captain doesn’t get his own special payouts in this game.

Treasure chest symbols will appear on every reel, and they help you to trigger the treasure chest bonus game. When you get three or more of this symbol on the same payline, the Pieces of Eight slot will take you to another stage where you’ll get to pick between different chests for an instant payout straight to your account balance. These wins are based on multiples of your entire bet, so the more you’re playing for when you trigger this feature, the more you will be able to win.

The cannon is a very important weapon for pirates because it’s the most effective way to fight another ship. In this game, the cannons are important for a different reason: They’re responsible for giving you free spins. Three or more of this scattered cannon symbol anywhere on the game board will pay out a set of 10, 20 or 30 free spins for three, four or five cannons, respectively. You can re-trigger the free spins during this feature, but you can also trigger the treasure chest bonus feature as well. This ability to access bonus features from within the free spins adds more value compared to games that do not allow this.

You’ll find that there are essentially two tiers of symbols in the Pieces of Eight video slot, and the top tier consists of four symbols. The top symbol is the first mate of the captain, and he’s an older man with glasses and a big smile. Five of a kind of the first mate pays out an overwhelming 10,000x top jackpot, the largest regular win in the entire game. It’s worth noting that you’ll also pick up 1,000x for four of a kind of the first mate, which is a pretty large win as well.

Next up is the pirate flag, and five of it pays 2,000x, the secondary jackpot. The parrot is worth 500x for a five-of-a-kind combination, and the crossed pistols pay out 400x as well. All four of these top-paying symbols give you wins for just two of a kind or more, which means more wins for you on the smaller end of the pay table and a higher hit-rate in the game in general, especially considering there are wilds on every reel.

The lowest level of symbols consists of five different things you’d associate with pirates. They all pay for three of a kind or more, and they all give you wins that are pretty decent.

You can win a prize of 300x for five of a kind of the two crossed swords. Another win of 250x is yours for five of the compass, and five of the scope pays 200x as well. The wheel of the pirate ship pays 150x for five, and you can get five of the anchor symbol on an activated payline for a 100x win. These are pretty good wins for the low-tier symbols.

A Note on the Volatility

We want to make a few notes about the volatility in this game because it’s a bit different than other games with a high volatility. The hit-rate in this game is pretty substantial in the sense that you’ll have a fair number of small payouts thanks to it having so many two-of-a-kind wins available. The actual volatility doesn’t come from a lack of small payouts, which is what’s typical in video slots with a high volatility and no progressive. Instead, it comes from how few and far between the medium-sized and large payouts are.

Make no mistake: The top payouts in this game are huge. There’s a five-figure jackpot and multiple ways to win four figures, and that’s on top of the volatility that comes from the two different bonus features. However, those wins don’t come very often, and the medium payouts don’t come all that much either. As a result, you have a game with a high hit-rate compared to other games with such a high volatility, but you should still adjust your bet size downward a bit to compensate for the swings.

Pieces of Eight is a great game overall, and it’s a very popular slot by Saucify because it has very exciting gameplay with chances to make very serious profits in a single spin. It also looks like it could compete with any other high-quality game out there, and the bonus features pack quite a bit of value as well. If you don’t mind the swings the volatility brings along, this could very easily become a favorite pick.