Piggies and the Wolf 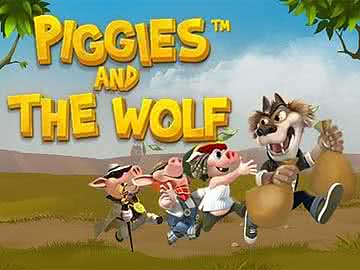 The Piggies and the Wolf online slot by Playtech has 50 paylines and is based on the story of the three little pigs with 3D graphics and a lot of different features. If you’re a fan of great-looking games with a ton of action, then this is a title that you won’t want to miss.

One of the most impressive things that an online slot developer can do is take an incredibly plain theme and turn it into a game that players really get into. This is what Playtech was able to do with the Piggies and the Wolf video slot, which is based on the story of the three little pigs. They’ve incorporated some great graphics with lots of 3D elements, and they’ve put a twist on the story by giving the main characters their own distinct personalities.

On top of that, this title is very dense with features. It also has a pay table designed to give you some real chances to take down significant payouts without making the volatility so high that it’s uncomfortable for many players.

Play Piggies and the Wolf Slot for Free

* We need to point out that while $5,000 is the maximum bet this game allows, no online casinos will allow you to play this high. Instead, they will set their own maximums on a case-by-case basis, which will usually range between $50 and $200 per spin.

Format of the Piggies and the Wolf Slot

With this game, you have a format that’s geared towards lots of action and lots of space for features and other goodies. This comes by way of having five reels and four rows of symbols with a total of 50 paylines available. These 50 paylines are always held in place, and you don’t have the option to play with fewer than the maximum, not that you’d want to. 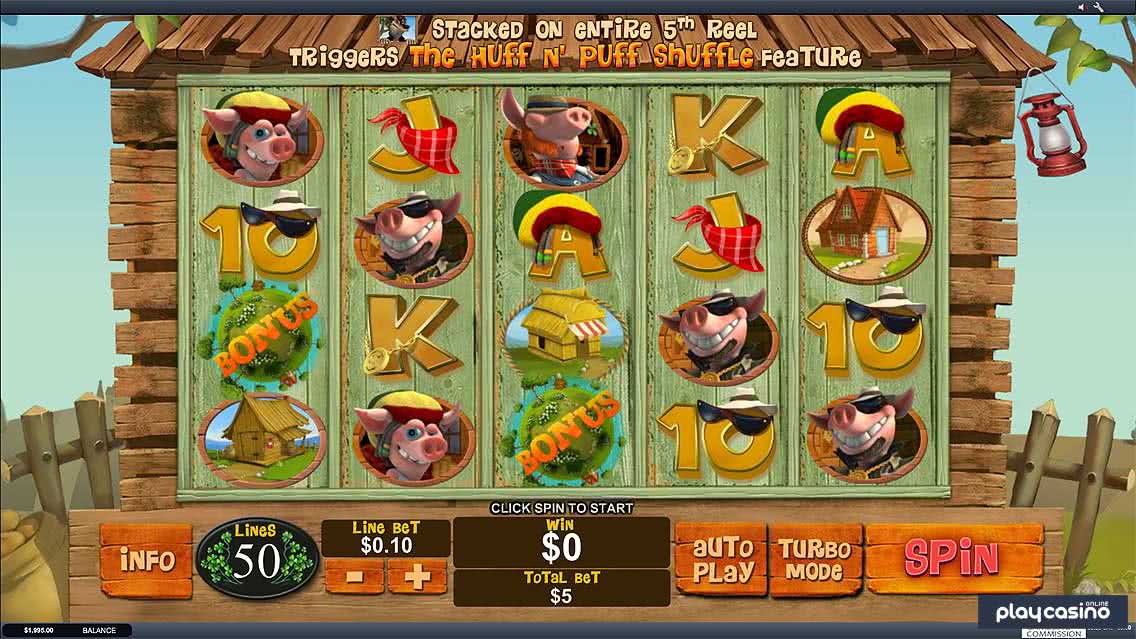 Betting in this game is set up so that you simply choose how much you want to bet per payline, and it will automatically update the display to tell you how much you’re betting total. Along these lines, it’s basically the same thing as just choosing between a variety of total bet sizes. Your per-payline options start at $0.01 and go up to whatever the casino has decided the maximum is, and this leads to a betting range that starts at $0.50 per turn and that goes up to somewhere in the range of $50 to $200 per spin in most cases. 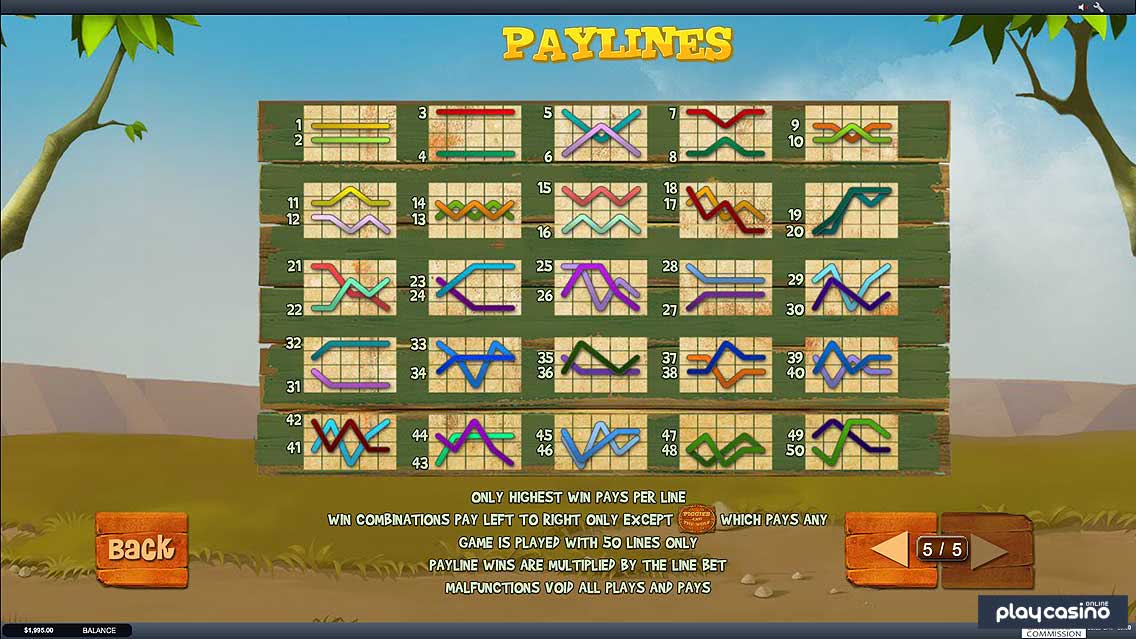 The wolf symbol is really important because it’s wild in this game, and it also has a very high top payout. Five of a kind of the wolf symbol gets you a jackpot of 2,500x, which is the largest regular win you can get in the game.

However, things get a little more complicated when you consider that the Piggies and the Wolf video slot has stacked wilds on the first, third and fifth reels. This means you actually have chances of getting the top jackpot more than once on a single spin, and that’s a lot of fun waiting to happen. This wolf substitutes for everything but the scatters and the bonus symbols.

The wolf is always telling the pigs in the story that he’s going to huff and puff and blow their houses down. Playtech incorporated this into a key bonus feature in this game, and that comes in the form of the Huff N Puff Shuffle Feature.

Whenever the stacked wolf symbol completely covers the fifth reel, you activate the feature. After your payouts are given, the wolf will ride by on a scooter and blow at the symbols on the reels, which forces them to shuffled around. This gives you a chance to get new wins, and it’s basically a type of free re-spin. You cannot re-trigger this feature, but it’s a way to get extra wins without having to wager anything, so you won’t see us complaining. 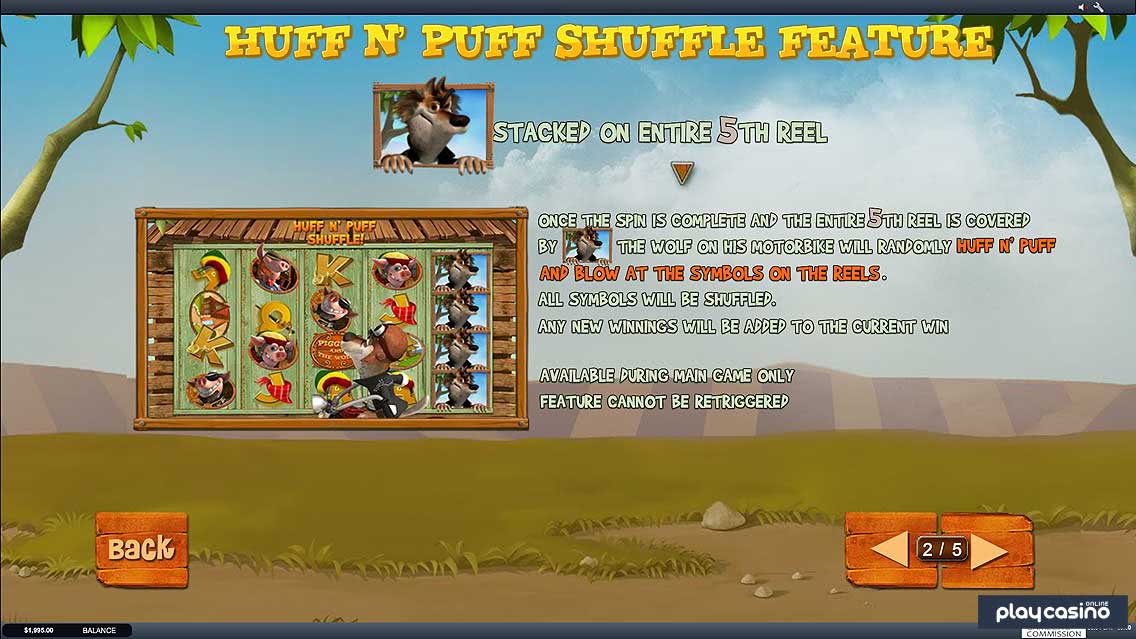 The Piggies and the Wolf online slot logo is the scatter symbol. It shows up on the first, middle and last reels only, and getting all three at the same time pays out a win worth twice your bet size. On top of that, all three on the screen at once will activate the free spins bonus round.

Players will earn 15 free spins once this feature is triggered. If you get the wolf symbol immediately to the right of one of the three pig symbols, then you’ll activate the Pigs Running Wild feature. This causes the wolf to chase the pig across the reels to the left, which will leave a trail of wilds horizontally on every spot he crosses.

You can re-trigger this feature by getting all three logo symbols on the reels at once again, and this will add 15 free turns to your total. 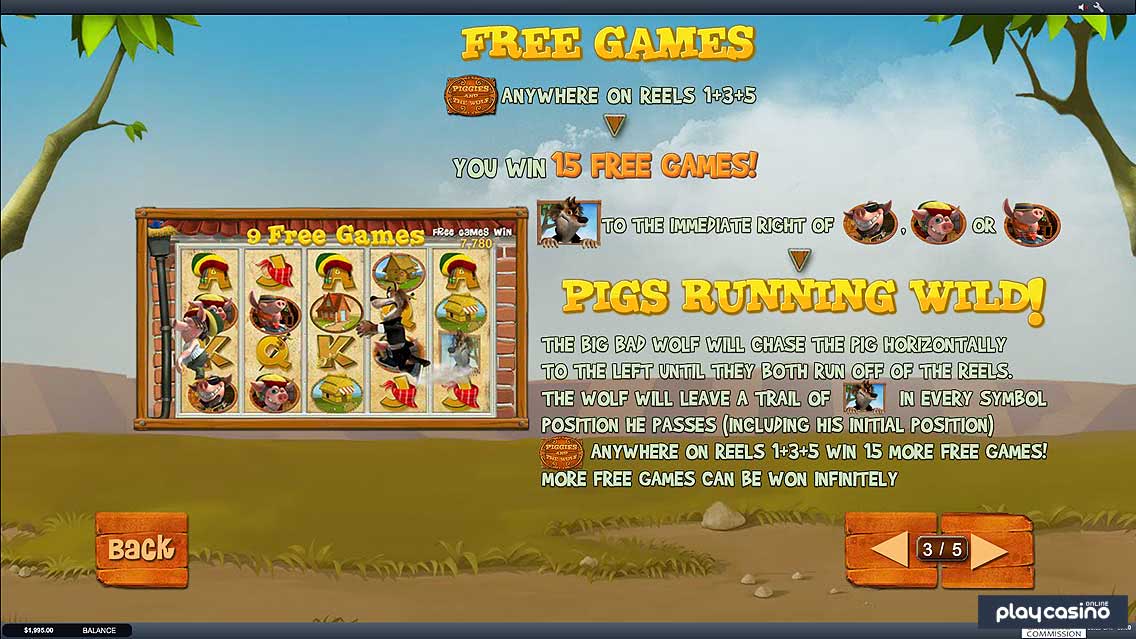 Blow the House Down Bonus Round

When the bonus symbol makes an appearance on the first, third and fifth reels at the same time (the only reels it appears on), then you get a shot at the bonus feature. You’ll basically see the wolf try to blow down the three different houses, and you get payouts when you’re successful. The further you make it into the round, the harder the houses become to blow down, but the prizes get larger as well. 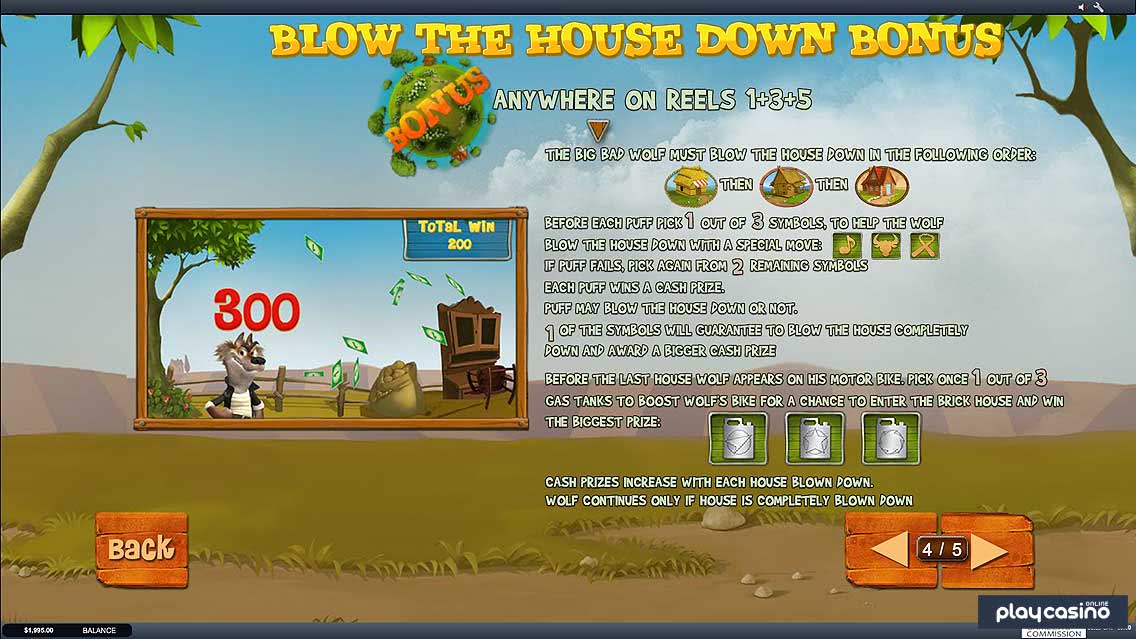 Pig and House Symbols and Prizes

You’ll find three pig and three house symbols that make up the upper end of the pay table in thi sgame. The first pig and his brick house each give out 1,000x prizes for five of a kind. The second pig and his house made out of wood are worth 400x for five on a payline. Finally, five of either the third pig or his house made of straw will give you a payout of 250x. 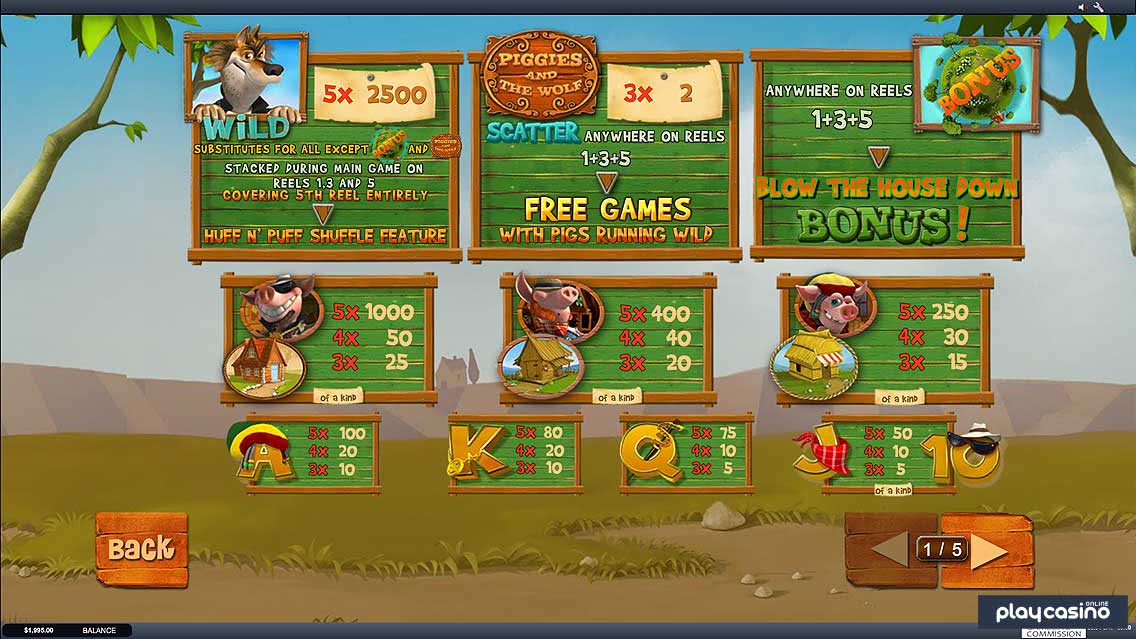 If you’re a fan of great-looking games with strong gameplay, then chances are that you will love the Piggies and the Wolf video slot. Playtech made this into a much better game than it had any right to be based on the theme alone, and that’s the type of thing that shows just how good of a casino game creator they are. The popularity of this slot is a direct result of how good they are with their games along these lines.