The Pinocchio online slot by BetSoft is based on the classic story of a wooden puppet who tries to become a real boy. This is a very in-depth game with multiple stages that offer extra symbols and different ways to get paid based on the happenings in the story.

There are some games produced by BetSoft that have a particularly in-depth game world, and the  Pinocchio video slot is one of those. They’ve broken up the story into various parts and used the most important characters in thes tory as well to give players opportunities to get paid in multiple ways. You’ll move through various parts of the story with different characters who give you extra bonus features and other ways of winning than what’s available in the regular game. With extra game modes and a feature-rich gameplay style, it’s clear that this is the type of title that appeals to a wide range of slot fans.

Format and Layout of the Pinocchio Slot

A format that isn’t used all that often in the industry as a whole provides the basis for this game. It has five reels and three rows, which is about as normal as you can get, but there are 15 paylines, which is a somewhat atypical number. That’s alright though because there’s still plenty of action. You will have the ability to choose other numbers of active paylines, but we strongly recommend that you keep this set at the maximum of 15 so that the return to player percentage value is as high as possible (which means better sessions overall). 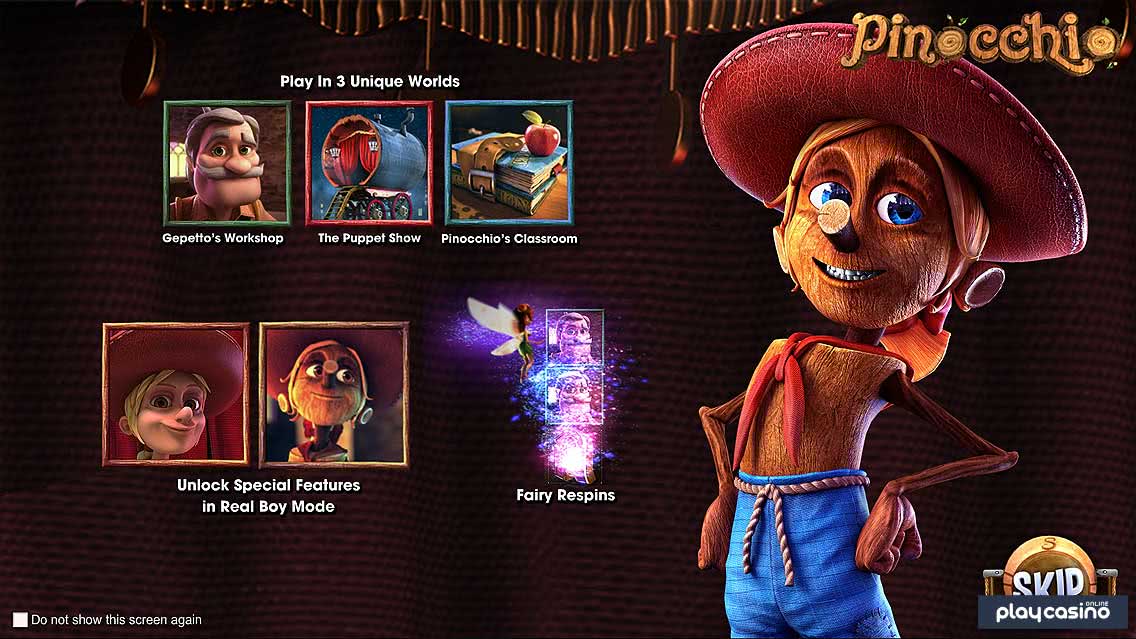 Betting in this game is pretty easy to understand. Assuming that you have all 15 of the paylines activated, you’ll have the ability to wager 15, 30, 45, 60 or 75 coins per spin based on up to five coins per line. You can set these coins to be worth between $0.01 and $1 as well. The minimum total bet size is $0.15, and the maximum is $75, which is obviously a large enough spread to satisfy virtually all players. We also really like how small the minimum bet size is in this game and how that can make players feel even more welcome to play with this title, even if their account balance is particularly low. 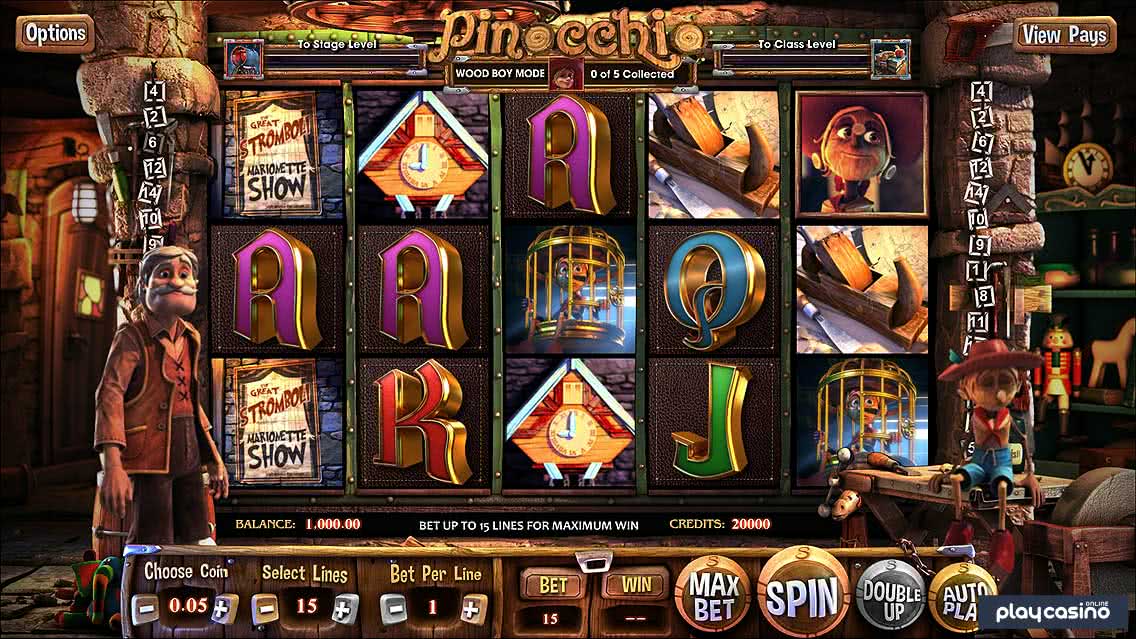 The main dynamic in the Pinocchio video slot is that he wants to become a real boy, and this is an important transformative process that mirrors growing up as a man. You’ll start with the puppet version of this main character for the main game mode, and if you collect five real boy mini symbols (located in the corner of regular symbols), this will switch things over into the real boy mode. Likewise, you can switch back over to wooden boy mode with five of the wooden boy mini symbols.

The benefit of being in real boy mode is that real boy wild symbols will appear on the reels. This gives you more chances to win, and they substitute for all of the regular paying symbols only.

There’s a cool feature in the Pinocchio online slot that gives you an exchange chance of winning. If you end up on a spin with no wins, but the position of the first, second or third reel kept you one symbol away from making a five-of-a-kind win, then the fairy companion will show up on the reels. She gives you a free re-spin of the reel that you need to move, and this gives you an additional chance to run up some winnings. This re-spin is completely free and does not cost money or run down your spin counter in the various game modes.

There are three game worlds that you can play in. The regular mode is based on the workshop, and you can go to the classroom world or the stage world by collecting books or wagon symbols, respectively. When you fill the respective meter by collecting those symbols, you’ll earn eight spins in the given world. Each spin that passes without a win counts down your counter, but spins that do give you a win will not remove a spin from your total.

Gepetto, the books and the wagons become scatters in the workshop, classroom and stage worlds, respectively. They each pay 30x for two of a kind and 150x for three of a kind, and they will only show up on the first, third and fifth reels in their respective modes. 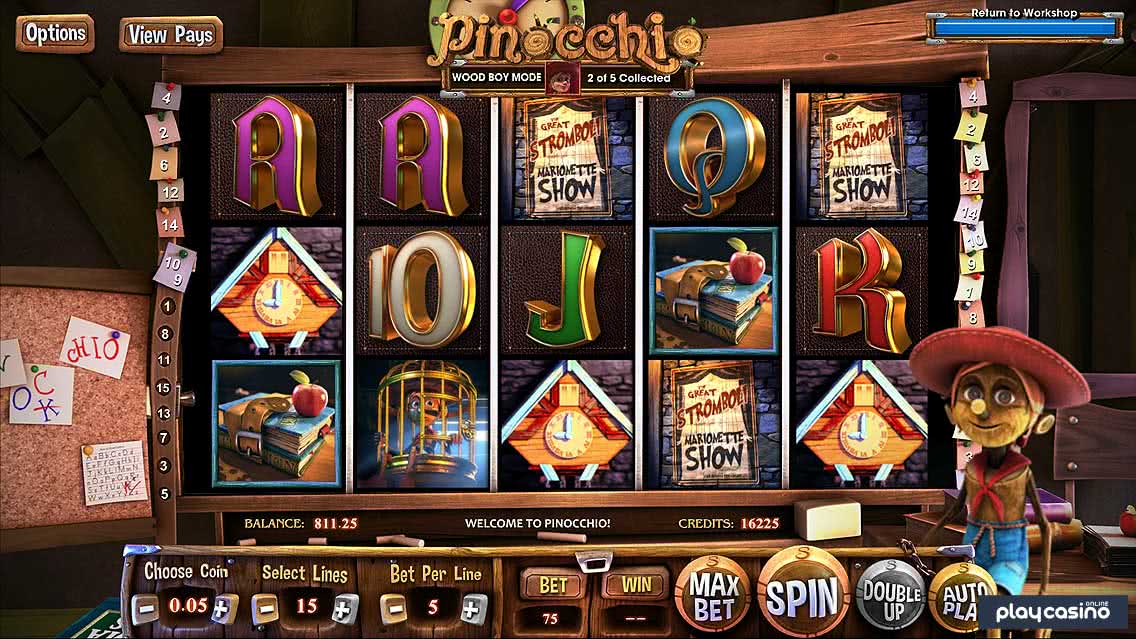 Each stage also has a special wild feature. If you get Gepetto on the third reel during the workshop stage, you’ll get the wild scroll feature. This has a scroll that moves across the reels giving you free re-spins for each chances at wins. In the classroom, wild books on the reels give you shifting re-spins with extra opportunities to get paid. Finally, the stage world gives you a wild scroll reel that combines the other two features for five free re-spins that do not count down your counter for the number of turns in that game world. 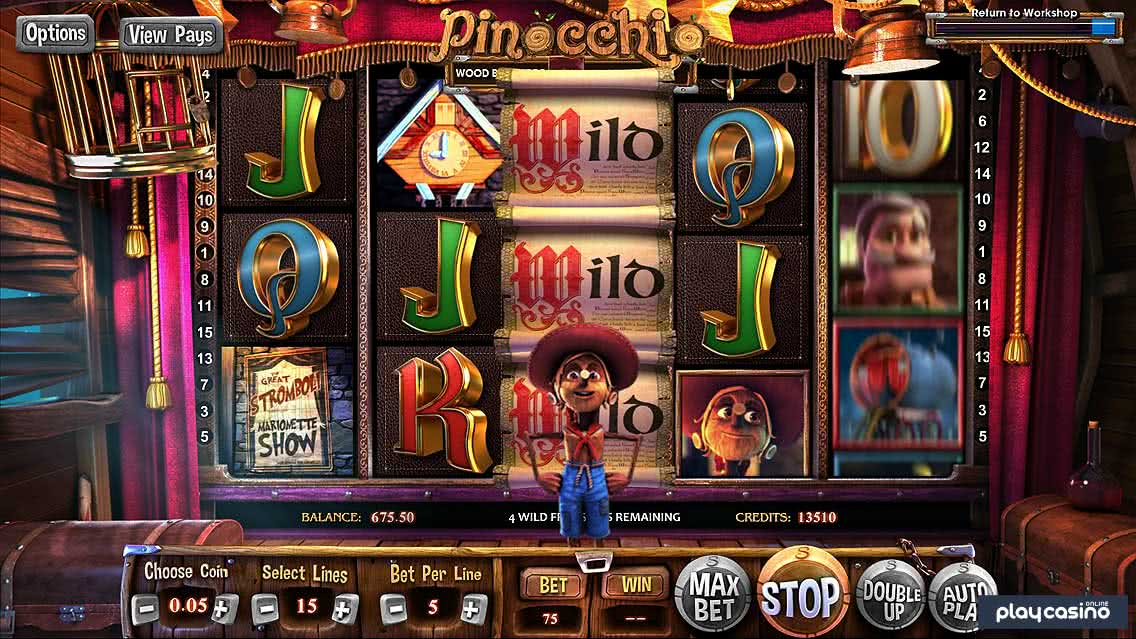 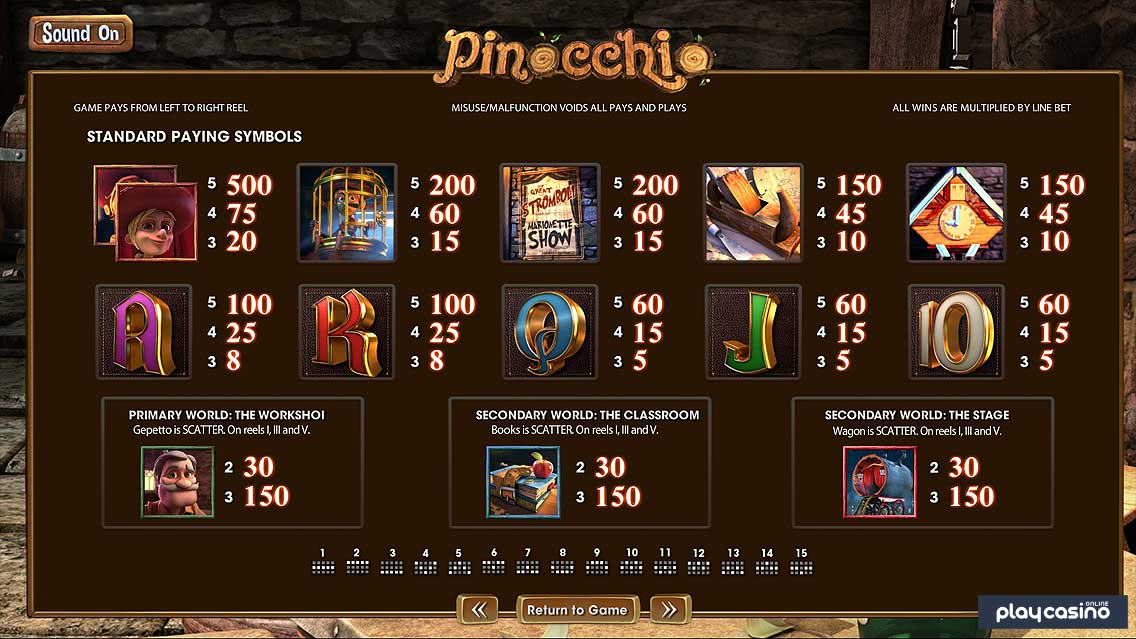 Five card rank symbols make their way onto the reels. You’ll see that they all use a beautiful font in different colors that matches up with the aesthetic motif of the game perfectly. There are two tiers of wins for these symbols as well, and they start with a 100x payout for five of a kind combintions of the purple A or red K. You can also pick up 60x for five of a kind of the blue Q, the green J or the gray 10. These are very balanced and solid payouts, even for the bottom of the pay table.

The Pinocchio video slot is an excellent example of how in-depth an online slot can be if you have a company like BetSoft behind it that knows how to really go the extra mile when it comes to top-tier graphics and gameplay. Using multiple game modes in various stages based on the plot of the story was a very good idea because of how the plot itself plays out, and they’ve used the various elements of the story in very fun ways to create a tremendous style of gameplay.