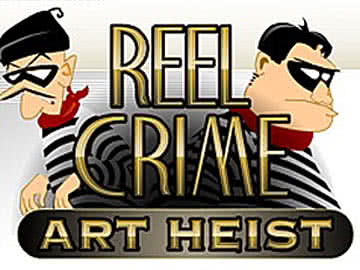 The Reel Crime 2: Art Heist slot by Rival Gaming is a part of their line of i-Slots with bonus features and multiple stages.

Rival Gaming is known for having a series of games that are called the i-Slots, which stands for “interactive slots.” The premise behind these games is that they all retain certain features, and that generally includes a set of stages that players can work their way through that will change certain aspects of the game. That’s the case with the Reel Crime 2: Art Heist slot. This game offers several stages of play with opportunities to get paid based on how far you make it through the story.

Rival Gaming is known for making slots that have pretty standard layouts, and that’s what you’ll find here as well. Players will get five reels with three rows as the basic format for this slot. Across that 5×3 grid are 15 paylines. A lot of players are fans of games with 10-20 paylines like this because it’s easy to remember exactly what all of the paylines look like, so you always know if you were supposed to get a win or not.

Betting in this game has been simplified quite a bit compared to what’s out there with some of the competition. You’ll have the ability to bet one coin on each payline you have activated, and you should make sure to keep all 15 paylines activated at all times to keep your RTP percentage up. Coins range from $0.01 at the minimum to $1 at the maximum, so your total betting range is $0.15 to $15 per spin. Some high rollers may not find bet sizes large enough to suit their tastes, but that’s like 1 percent of 1 percent of 1 percent of players, so it’s not a big deal for the vast majority.

Plot of the Game

As an i-Slot, this game has a plot that’s fairly important to how the gameplay works itself out. There are two thieves named Remy and Raoul, and there’s a process you have to go through as the story unfolds. First, you have to pick out the masterpiece painting that they are going to try to steal. From there, you have to get all of their tools and then actually steal the painting. You have to make your getaway, and then you have to help them find an art collector who they can sell the newly acquired painting to. Finally, you have to avoid being caught when you’re making the sale.

If you make it through all of these steps, you’ll see your thief buddies celebrating in Jamaica, and you’ll get paid accordingly. If they get caught, however, then you get to see them in jail.

Along these lines, the game proceeds through a number of stages. It starts with the introduction that you get when you first start the game, and then you’re taken to different stages as you play out the plot. Between certain stages, you’ll get a bonus feature that will give you some payouts as a reward for making it that far in the game. You’ll eventually end up starting the game over if you don’t make enough progress to finish, or you’ll find yourself in jail or on the beach if you do finish. This storyline progression gives the Reel Crime 2: Art Heist online slot a ton of replay value.

At any point in the regular gameplay for this title, you can trigger the Robin Hood Bonus Feature at random. This takes you to a second screen where you will see film play out of different events that are happening in the story. You have a chance to win anywhere from 400 to 1,000 coins in this feature, and it’s essentially decided randomly which type of win you get. However, you do get to see parts of the story go by, which is entertaining enough in and of itself.

The Forger in this game looks like a man standing in front of a painting while wearing black, and he’s the wild symbol. He is responsible for the largest regular pay, and he’ll substitute for any of the normal symbols (non-scatter and non-bonus). He’ll also hit any payout with a 2x multiplier that he is a part of as long as at least one of him is located in the winning combination.

Aside from these features, he also has some pretty solid pays on his own. A 5,000x jackpot payout can be had for five of a kind on an activated payline. It’s still 2,000x for four of a kind, which is also impressive. You can pick up 200x for three or 10x for two of a kind. This is one of two symbols that pay for two of a kind.

Players will find four scatter symbols in this game. The first is the Reel Crime 2: Art Heist symbol, and it acts as a bonus symbol when you get three or more located on the reels at the same time. This bonus feature can get you some extra value, but there’s not really anything you can do to influence the result. You should just sit back and enjoy the animations along with your instant win to get the most entertainment out of this particular feature.

Aside from that, there are three special framed paintings that are the three masterpieces that can help you to get to the next round. Get four or five of one of these on the reels at once to move to the next stage of the game. They each pay 100x, 25x or 10x for five, four or three of a kind, anywhere on the reels. These wins are multiplied by your total bet size, so the top pay is like a 1,500x line bet win.

We think that the Reel Crime 2: Art Heist online slot is a great example of how Rival Gaming broke out of the mold with their i-Slots line of games. It incorporates a lot of different aspects of the game into one cohesive and immersive experience that really draws players in. If you’re a fan of games that will keep you wanting to see what happens next, then this is a slot that you should check out.