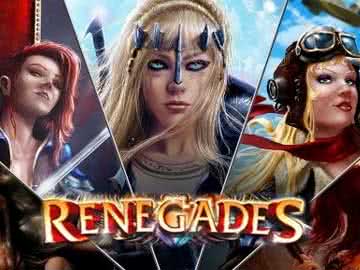 The Renegades slot by NYX Gaming features a set of five adventurous women across 243 ways to get paid.

The Renegades slot is a title by NYX Gaming that centers around five different female adventurers in different contexts and different times. The action isn’t only found in the adventures these fearsome females would have, but it’s also found in the way the game is presented and how the gameplay has been put together to keep the action as fast-paced as possible. This is definitely a game that anyone will find the appeal in between the exciting theme and the action-centric play style.

Format and Layout for the Renegades Slot

The layout for this game is the foundation on which the action is set, so it has to be geared towards lots of ways to win. With three rows of symbols across five reels, it’s not surprising that the 243-ways format is what’s used in this game because of how it affects the gameplay. You don’t have to worry about traditional paylines in this game because all symbols (except for the scatter) pay from left to right on adjacent reels regardless of where they fall on those reels. 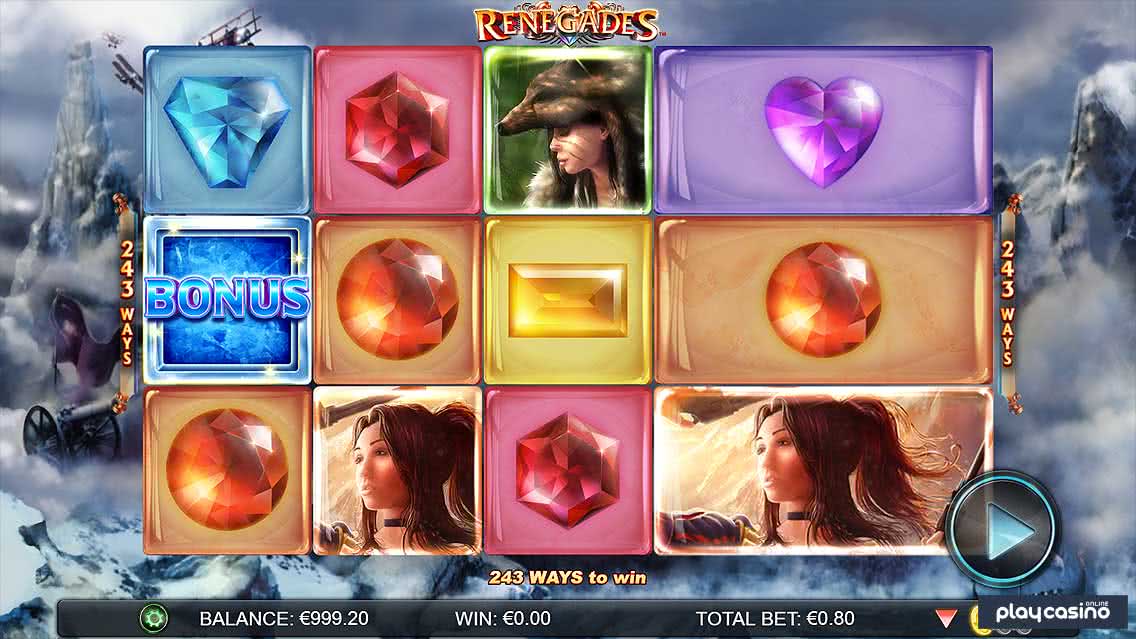 Betting in this game uses 40 coins per payline, and you can pick coins that go from $0.01 to $2 apiece. You won’t choose the actual coin sizes, however. Instead, you’ll just pick from the available total bet sizes. The low end is $0.40 per turn, and the maximum is $80 with the available effective coin sizes.

There are five renegades in this game, and they are the five women adventurers. You have the gunslinger Raffaela, the pilot Harriet, the valkyrie Freya, the dragonslayer Valda and the sabreclaw wearing a wolf skin Ivy. These are the five main symbols in this game, but they’re also central to the features in the Renegades online slot, as you’ll see below. 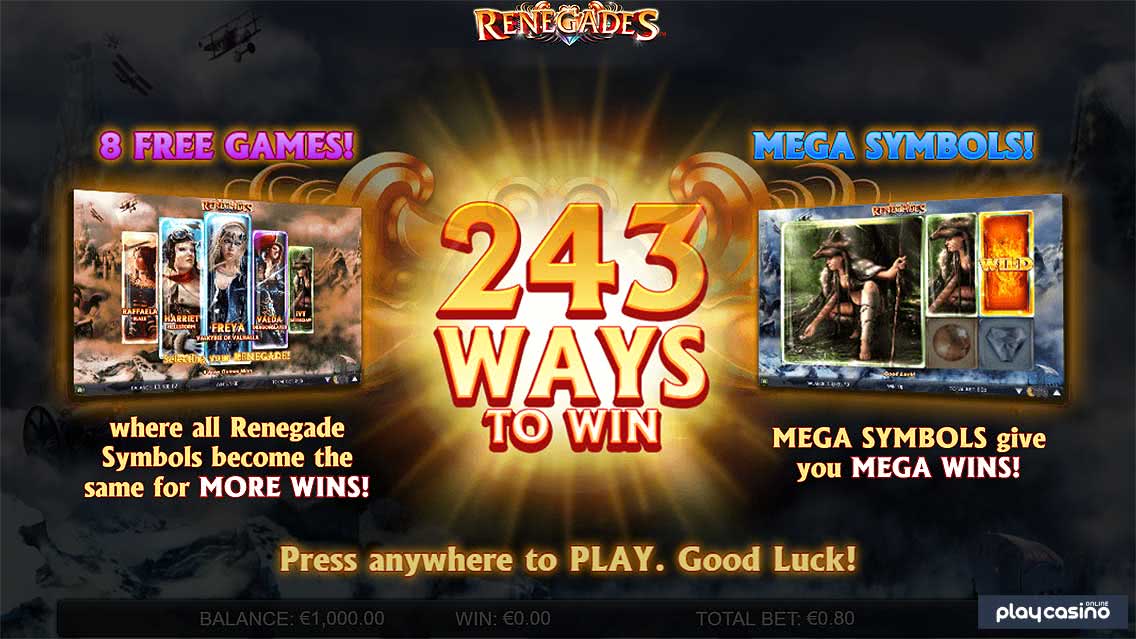 During the regular gameplay and the free spins, you can get mega symbols. These are essentially symbols that can range in size from 2×1 to 3×3, and they are basically matching symbols that take over the given number of “spots” taken up on each reel. These help you to get better payouts by matching up connecting symbols, which is extremely valuable in the 243-ways format that this title uses. 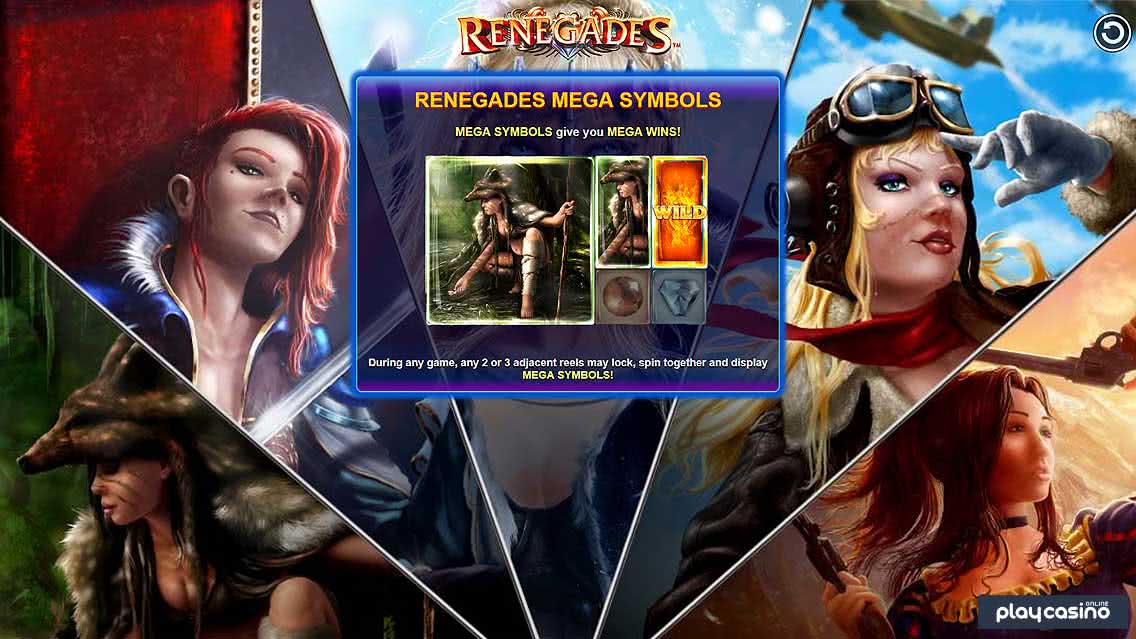 Something else that’s really useful in an all-ways style of game is a wild symbol. You have one in the Renegades video slot that shows up on every one of the five reels. Five of a kind of the wild pays out 250x, which is pretty solid considering you’ll make other five-of-a-kind wins too since that means you’ll have four wilds on the first four reels. Plenty of other wins will be available as well thanks to these wilds if you get five.

Four of a kind earns 25x of this symbol, and you can also pick up 10x for three of a kind.

The bonus symbol is interesting in this game because it doesn’t just help you to get a shot at the bonus feature. Instead, it helps you to get scatter payouts as well. Five of this bonus scatter anywhere on the game board pays out 400x. Three or four will get you 80x and 200x, respectively. These wins come no matter where the bonus symbol shows up on the reels, even if it’s not from left to right.

The Renegades online slot has a bonus round that centers around free spins. You have to get at least three of the scatters on the screen at once to qualify for this feature. You’ll always be awarded eight free spins no matter how many bonus symbols you have, and that may not seem like many, but the way the symbols are handled is different during the bonus.

When you’re playing out your free spins, you will only have your specific renegade on the reels along with the wild, the bonus symbol and the five gems. The idea is to make it much easier to hit wins with your renegade of choice (which is actually chosen at random). This is a good twist on the free spins mode idea, and it’s the type of thing that has helped to make NYX Gaming such a popular developer of slots. 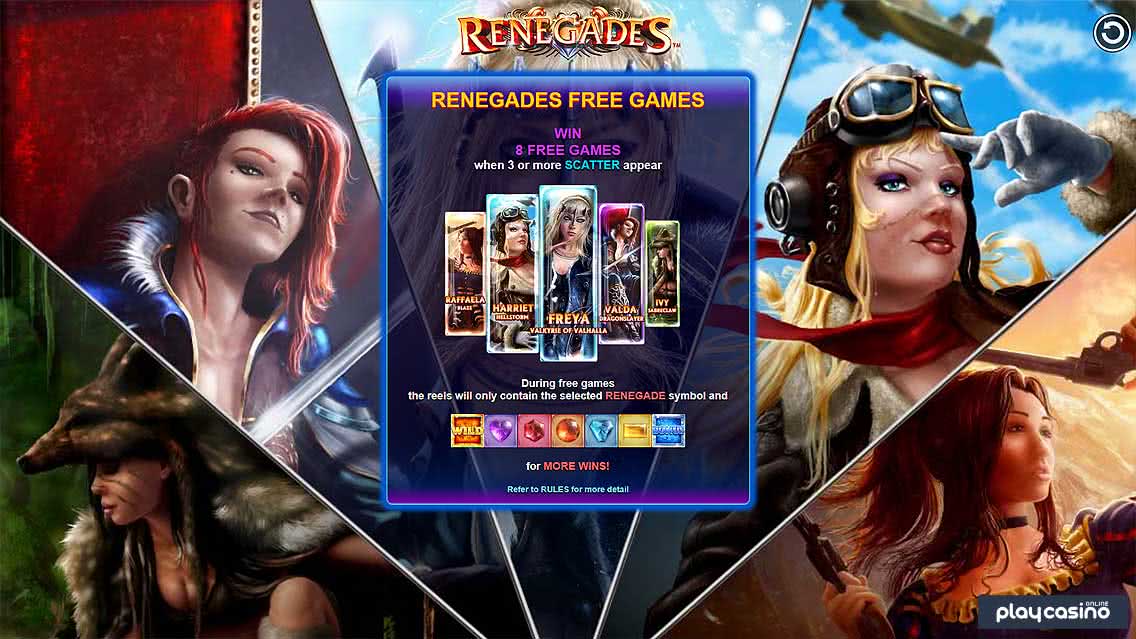 Notes on the Payout Structure

Before we get into the actual payouts, you need to remember two things. First, these wins are represented as multiples of your entire bet, which is different than how most games represent their wins as multiples of the line bet wager. Second, you’ll have more chances to get multi-line wins than you do in most titles because of the 243-ways format combined with the mega symbols feature.

The five renegade symbols themselves make up the top pays in this slot. Freya in the blue outline gets you 200x for five of a kind, and Harriet in the pilot goggles is worth 150x when you get five. Valda the redheaded dragonslayer is worth 100x for five, and you can get 75x for five of the gunslinger Raffaela. The sabreclaw Ivy wearing the wolf skins is the last of the five renegades, and she earns a 50x payout when you line up five of her on the reels. 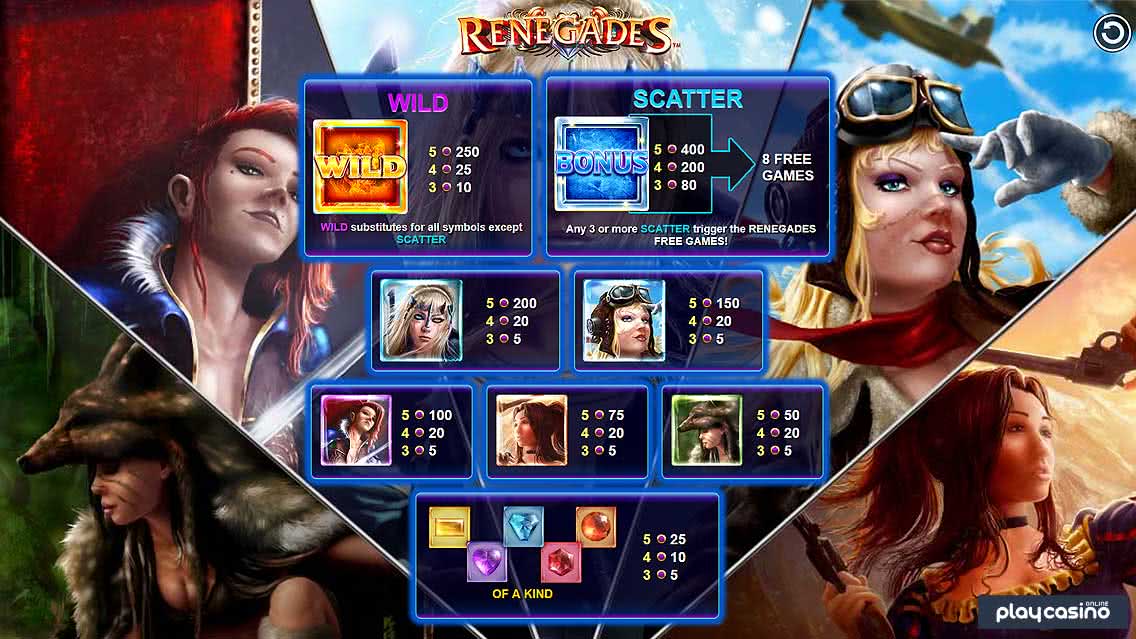 Players will find that there are five gems on the reels of the Renegades video slot, and these make up the lower-paying symbols. The yellow rectangle, the blue diamond, the orange circle, the purple heart and the red hexagon all correspond to a respective renegade. However, all of these gems give you the same payouts with no variation, and this is 25x for five of a kind. You’ll also earn 10x for four and 5x for three. Remember once again that these are multiples of your entire bet size, so you’re actualy getting some pretty good wins here.

The idea of putting together five different women from five different background who obviously have some great things going on with various adventures is a pretty novel concept, and it’s something that makes the Renegades online slot stand out in a big way. NYX Gaming did an excellent job with this slot, and it’s not difficult to understand the level of popularity it has.

When you play this game, you get a mix of great gameplay, a solid theme and graphics that really look great and that capture the essence of each of the five characters. They obviously put a lot of time into the visual appeal of this game, but the gameplay was given just as much attention with a strong mix of good features that drive the action in a major way.