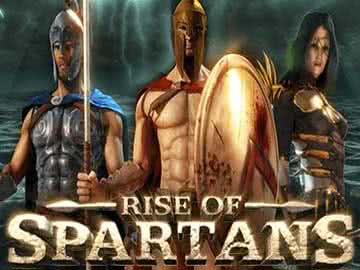 Rise of Spartans is a video slot by Saucify that uses 15 paylines with free spins, wild mulitpliers and other features to offer significant payouts.

There’s no shortage of online slots that use themes based around Ancient Greece. The Rise of Spartans online slot is a game by Saucify that falls within this genre as well. They have a number of games that follow as a part of this series, but this is the one that stands out as the most popular. It has excellent graphics that help to create a very exciting experience for players, and it offers a high-volatility experience without the use of progressive jackpots. As a result, you always know how much you stand to win on every single spin.

Format and Layout of the Rise of Spartans Slot

This game uses a format that’s pretty familiar to anyone who plays a lot of video slots. There are five reels, three rows of symbols and a total of 15 paylines. Your betting is set up around three options that allow you to manipulate the number of paylines, the number of coins per payline and the size of those individual coins. We strongly recommend against playing with less than the maximum of 15 paylines since it will lower your overall chances of winning by dropping down the RTP percentage.

The minimum bet size in this game is $0.15 per turn, which is well within the bounds of what virtually all players should be comfortable with if they’re playing online. With coins that are worth as much as $0.25, and with up to five coins on each of the 15 paylines, you can wager up to $18.75 per turn as well. This creates a betting range that’s inclusive for almost all players out there except for the highest of high rollers.

There is a warrior symbol of a man with a silver helmet and a blue cape, and that is Themistocles. He’s the wild symbol in this game, and he’s important for a few different reasons. The first reason he’s important is that he gives you some pretty good payouts. A win of 8,000x for five of a kind is nothing to sneeze at, so to speak, and it’s the largest regular payout in the entire Rise of Spartans video slot. Wins of 1,000x for four of a kind and 160x for three of a kind aren’t bad at all either.

This wild symbol also has a multiplier attached. Every win that you get that includes at least one wild is multiplied by a factor of two. This 2x wild multiplier gives you even more value than you’d think because it appears on every one of the five reels.

There’s a woman wearing a sort of gold armor with red markings on her face and a bow. That is Artemisia, and she’s the scatter symbol in this game. Five of her anywhere on the game board gets a payout of 80 times your total wager. You can win 10 times your wager or 1 time your wager for four of a kind or three of a kind, respectively. She doesn’t have to show up on any particular reels or anything to get you these payouts, and she can appear anywhere on the game board for wins, which makes her particularly valuable.

King Xerxes and the Pick a Prize Feature

Xerxes is the Persian king who kept trying to take over Greece and who was stopped by Sparta. He’s generally considered their chief antagonist, and that’s definitely the case in the Rise of Spartans online slot. He has a tall, golden crown with a big, black beard and golden clothes in front of a cloudy type of background.

The Artemisia scatter symbol doesn’t just give you payouts. It’s also responsible for giving you the Rise of Spartans video slot’s free spins feature. Three or more will get you between seven and 15 free spins. These free turns are even more valuable than usual because you’ll be given a 3x multiplier on every one of your payouts. These stack with the wild multiplier (2x) to give you a total multiplier of 6x.

However, that’s not all you get that’s extra in this feature. At random, Artemisia can rain down burning arrows that drop extra wilds on the reels that will substitute for anything but the scatter. The 2x wild multiplier is attached to these wilds as well to give you even better chances of getting huge payouts.

A second scatter symbol is had in this game as well. Queen Gordo is the only woman in the game not holding a bow, so it’s pretty easy to keep up with her. She gives you a solid win of 200 times your total bet size, which is like a 3,000x line bet win, if you are able to get five of her anywhere on the game board. Four of a kind brings you a win worth 50 times your bet, and it’s four times your wager for just three of a kind. She pays no matter where she’s located on the reels to give you better opportunities to hit these scatter wins.

Warriors and Other Major Payouts

Saucify has a few different games that use Greek or Roman themes, and it’s a very common motif in the online slot world. Rise of Spartans is one of those games that stands out from the genre because it does virtually everything right. From the strong graphics to the big potential prizes and fast-paced gameplay, the action on the reels matches the action on the battlefield, giving this game its high level of popularity.