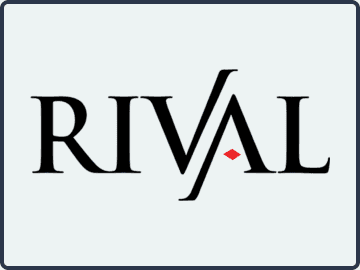 Rival Gaming is known primarily for their i-Slot line of titles, but they have developed a number of other classic slots and video slots as well.

While they are often seen as the least popular of the companies that offer online slots to US players, Rival Gaming has actually done a lot with their games that is a bit outside of the box and that has influenced some of the biggest names in the industry as a whole. Their i-Slots line in particular, along with how they have innovated in the three-reel slot space, has put them in a position of offering players certain types of slot experiences that they can’t get anywhere else.

The games that have been produced by Rival Gaming cover a ton of different themes and concepts, but we’ve picked out a few that we think are the best options for players to really see and feel what this game developer is all about. Frogged, Tycoon Towers and Champs-Elysees are three games that really exemplify what Rival Gaming slots look and feel like. In particular, they show how they’re able to create different styles of graphics and visual appeals to fit the themes of the games they develop, which is something you don’t see very much of from the competition.

All of Rival Gaming’s titles can be played in your web browser, so you won’t have to worry about any kind of compatibility issues or other problems. You can also check out their games using a very flexible mobile application. The Rival Gaming casino software is designed to give all kinds of players with all kinds of different computers and mobile devices a chance to log in and play, and they’ve achieved that in a major way.

The line of i-Slots is the most popular set of games from Rival. These are video slots that are set up to have multiple stages of action depending on what happens in the game. Storylines unfold along these lines, and you can end up with different backgrounds, different symbols, different features and different payouts depending on how far you make it into the story. This drastically increases the overall replay value of these games.

On top of that, they have also produced some really great classic slots. The graphics aren’t always great, but the gameplay of these titles is closer to video slots than any other three-reel slots that you’ll find online, which makes them a fun alternative to try out.