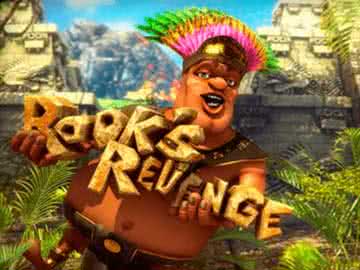 Rook’s Revenge by BetSoft is a video slot based on an Aztec theme with excellent graphics and an avalanche feature that can lead to some huge multi-hit wins.

As a part of BetSoft’s Slots3 line of titles, Rook’s Revenge gives players extremely strong, 3D graphics. It also has particularly involved gameplay in the sense that players will get a lot of hits thanks to the way the features play out for a high hit-rate, low-volatility experience. You’ll see Rook himself dancing and posing along the side of the reels, and there is a big Aztec pyramid in the background. This is a beautiful game overall, and the gameplay is top-notch as well.

The format for this game is based on a typical 25-payline video slot. That means there is a grid of five reels and three rows with 25 ways to win across them, but the thing you’ll notice about this game’s layout is that there aren’t reels in the traditional sense. Instead, they are more like vertical rows of square, stone symbols that fall in from above and pile up. They are effectively the same as reels, but the change is relevant to the gameplay, as you’ll see below.

Betting is pretty normal in Rook’s Revenge with the ability to bet as many as five coins on each payline. You can pick coins that go from $0.02 at the bottom end, which is typical for BetSoft, and that go up to $1 apiece at the upper end. This means the minimum bet size is $0.50 per turn, but you can go as high as $125 for the maximum wager. Clearly you can see that players at all stakes wil have no trouble with getting set up with a bet size that fits their account balance here. 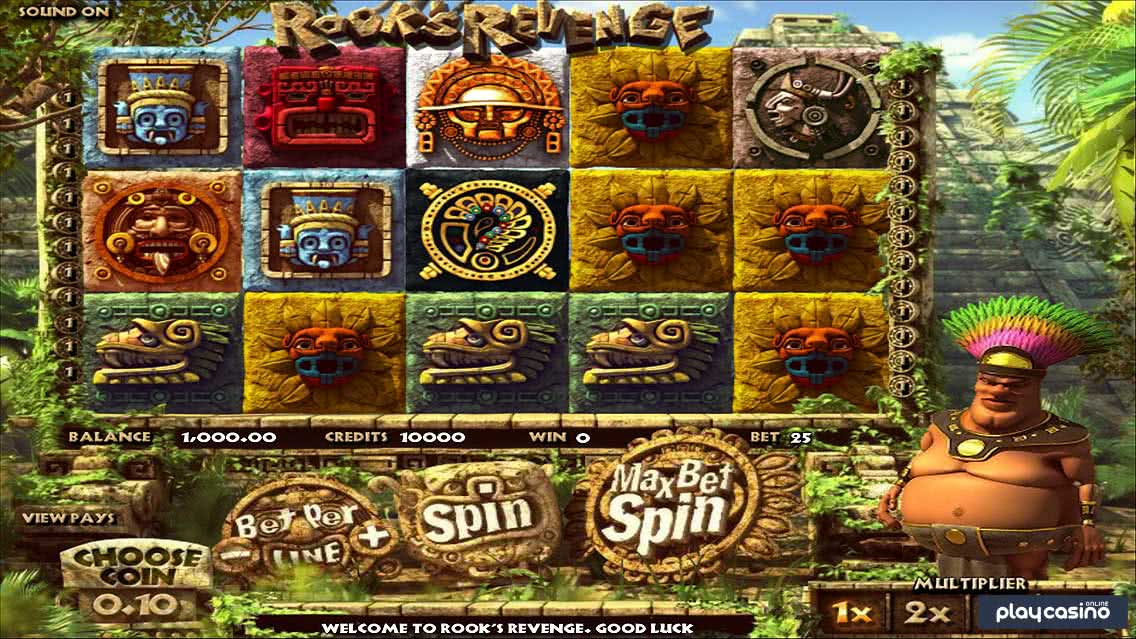 The wild symbols looks like a golden circle with a row of symbols inside of it that look somewhat like a question mark. This symbol does not have its own payouts, however, because it is located on the second, third and fourth reels only. A similar sort of thing happens with the mask bonus symbol because it only shows up on the first three reels. The mask does not work like a scatter, as you see with many bonus symbols. Instead, you need to line up three on an activated payline to activate the free spins bonus feature.

Whenever you line up three of the mask symbol on an activated payline, then you get a shot at the free spins bonus feature. You won’t necessarily know how many free spins you’re going to get, but you can re-trigger the feature to get even more free turns. What’s important about these free spins is that you get a 3x multiplier on all of your payouts. These multipliers can combine with the multipliers from the main gameplay (see below) to give you some pretty incredible payouts. 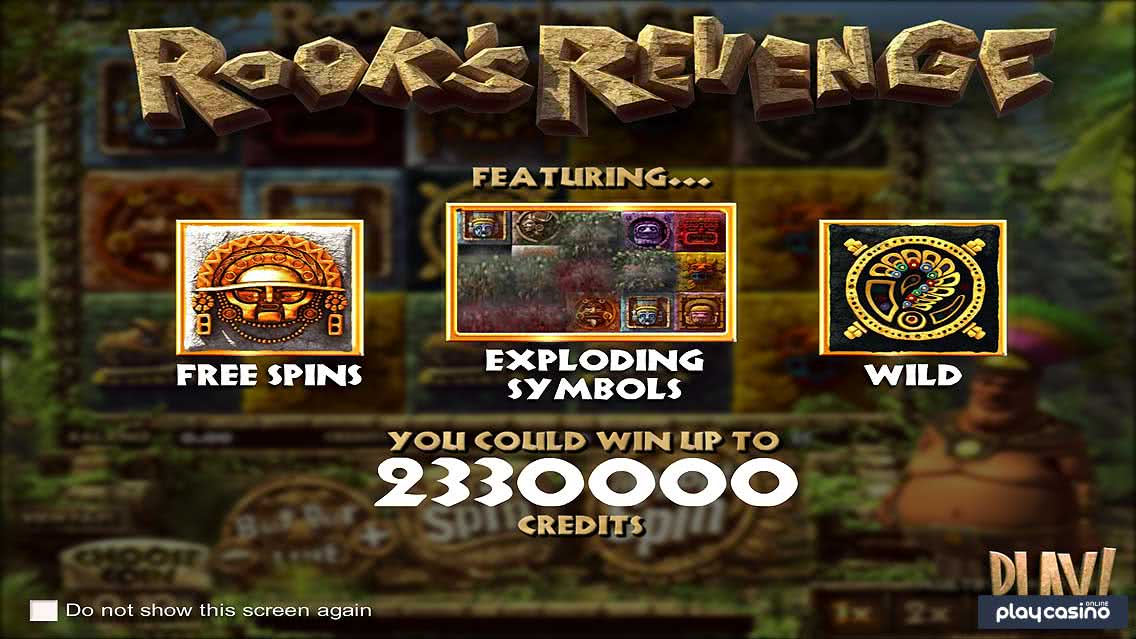 The main gameplay feature in this game, and what really drives Rook’s Revenge as a slot, is the avalanche feature. The way this feature works is that all winning combinations explode after they are paid to allow new symbols to fall into place to make new winning combinations. You don’t have to pay extra for this feature, which amounts to a variation on a re-spin feature, but you do get multipliers for each re-spin, and they can help you to get some pretty large pays. 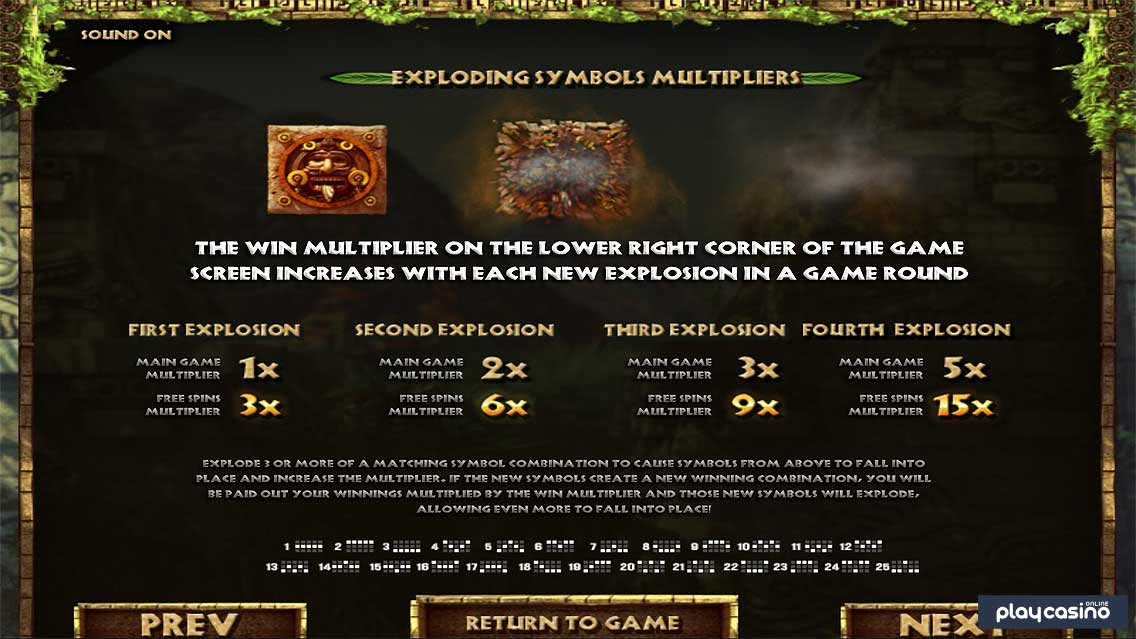 Important Payouts in This Slot

While Rook’s Revenge does have a very balanced play style that lends itself to a reasonable volatility, it still has some nice payouts at the top end of the pay scale. The red face symbol that looks like a wide-open mouth pays 2,500x for five of a kind. You can also win 1,000x for five of the purple head symbol, and 500x for five of the cyan/blue symbol is also available. A 200x win is yours when you line up five of the orange square, and the green gets 100x. Prizes worth 75x and 50x are your prize for five of a kind with the yellow or brown symbols, respectively. 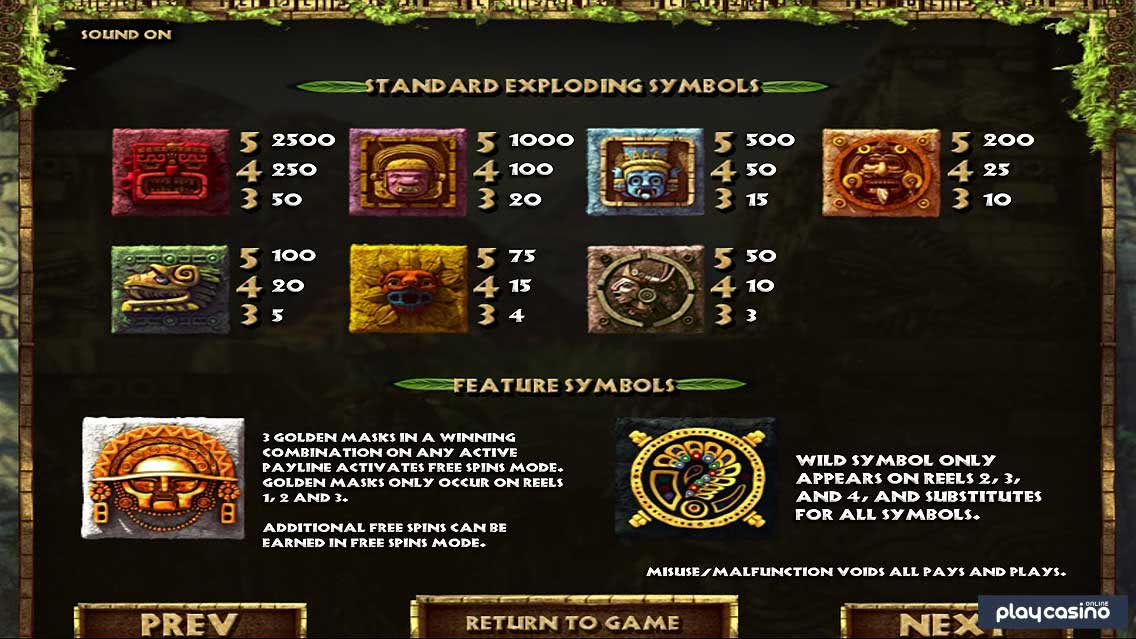 Rook’s Revenge is a particularly impressive game for a number of different reasons. First off, the graphics are top-notch, and that’s because you’re going to be hard-pressed to find a company that consistently makes games with better graphics than what you’ll find in BetSoft’s Slots3 line of titles. Second, the bonus feature with free spins that offer multipliers as high as 15x with a base multiplier of 3x packs a lot of value, especially considering the top regular prize in the game is 2,500x.

Finally, there is the gameplay centered around the avalanche feature itself, and that’s a big deal, especially with how the reels have been replaced with stacks of stone symbols that fall down vertically. That’s a pretty interesting way to change the typical format of a game to fit the gameplay, and because it also ties it into the theme of the game, we find that it’s a very important part of the player’s experience as a whole.