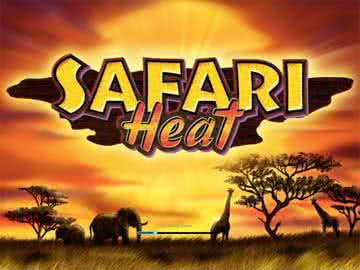 Safari Heat is a video slot by Playtech that has a huge 10,000x top jackpot along with a free spins feature with multipliers.

Playtech has a lot of games that are based on fairly generic themes but that give players an in-depth experience based around a specific style of gameplay. Safari Heat is one of those games, and it centers around giving you a high-volatility experience without progressives by focusing on a few features that hold most of the value in the game. This is a high-action approach that has earned this game a spot on our list of Playtech’s most popular games ever.

Format and Layout of the Safari Heat Slot

This game is a 15-payline video slot. You get a grid of 15 symbols as well with five vertical reels and three horizontal rows of symbols. Players have very simplified betting with this game as well because you simply pick how much you want to bet on each of the 15 paylines. Your payline bet selection ranges from $0.01 to $1, and that leads to an overall betting range for the game itself that goes from $0.15 to $15 for each individual spin.

The Safari Heat video slot will give you the option to play with fewer than the maximum of 15 paylines, but doing so lowers your RTP. If you’d feel more comfortable with a smaller bet size, you should keep your number of paylines at 15 and adjust the bet size per line instead. Since you can get your bet size down to $0.15 per spin this way, there’s really no reason to play with fewer than 15 paylines per spin.

If you were to ask anyone who the most important animal is on an African safari, most people would say the lion. That’s why he’s the wild symbol in this game, and there’s no denying that it’s one of the two most important symbols in the entire Safari Heat online slot.

Something else to note about this wild is that it acts as a 2x wild multiplier. When you get a winning combination that includes at least one of them, you’ll see that combination doubled. The exception to this is the scatter symbol because the lion does not substitute for it. It’s easy to see that this wild lion gives you a lot of value, and it’s the one symbol that sets the tone of the gameplay the most.

The symbol of a tree with the sunset behind it is the scatter symbol in the Safari Heat video slot. You’ll see them on each reel, and you can get a payout for two or more. Two of a kind gives you a 2x win, and three of a kind kicks it up to 5x. You’ll win a 20x prize for four of a kind, but the top scatter prize for a five-of-a-kind combination is a whooping 500x.

These payouts are multiplied by your total bet size. This means the top win of 500x for five is the same as a 7,500x line bet win, which is absolutely huge and the second-largest overall win in the whole game.

Players can win a set of free spins in this game as well. To trigger this feature, all you have to do is get three or more of the scattered tree symbol. They don’t have to appear on a particular payline or any specific spots on the reels; they just have to appear anywhere at all.

When you get three or more of this scatter, you’ll pick up 15 free spins. To add even more value to these free turns, all of your wins are multiplied by a factor of three. This combines with the multiplier from the wild as well, so a winning combination with a wild symbol in it actually pays six times its usual value when you’re in the bonus feature.

Your free spins can be re-triggered indefinitely as well. All you have to do is get three more scatters during the bonus feature and 15 more free spins will be added to your total. This gives you more value than games that take away the ability to re-trigger free spins.

Four different animal symbols make up the top tier of payouts in this game. What you need to realize is that there’s an enormous drop from the very top payouts to these wins, which are all firmly in the middle range. Five of a kind of the elephant symbol pays out a solid 750x prize. You can get the same win for five of the rhino. Five of the zebra or wildebeest pay out 250x as well, but the flamingo is good for 500x for a five-of-a-kind combination. These are balanced payouts, but again, the volatility of this game is very high because there’s such an enormous drop from the top payouts to these wins.

There are six card ranks that give payouts in three different tiers. At the top, you have the red A and green K symbols. Each of them will award you with 150x when you line up five on a payline. You can also pick up 125x for five of a kind of the yellow Q. The purple J and orange 10 pay 100x, as does the blue 9, for five of a kind. The difference is that the blue nine pays for just two of a kind, and all of the other card ranks require three for a payout.

As is the case for games from any software provider, you have to look at Playtech’s portfolio as a whole to see where any one particular title falls into place. With the Safari Heat online slot, what you’ll see is that it has its place for players who like chances to win big payouts without worrying about a high volatility or any issue over progressive jackpots. You can see that from every aspect and feature of the game, including its wilds and free spins feature.

The bottom of the paytable has a lot of fair wins, and the middle of the table is pretty balanced as well. The only thing that kicks the volatility up is the big set of jackpots at the top-end of the pay scale. Overall, this is a great option for people who want a game that’s balanced overall except for the top-tier wins.