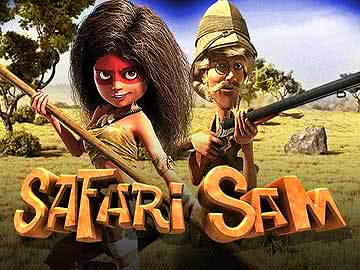 The Safari Sam online slot by BetSoft is based on taking a safari trip through the plains of Africa. It’s full of bonus features with different ways to get multipliers along with free spins, and the pay table offers some pretty solid prizes.

BetSoft has developed a lot of games that use a wide range of different types of themes. The Safari Sam video slot is one that uses an African safari type of theme, and you’ll see cool animals and the landscape in the background with very strong 3D graphics. This isn’t surprising as this title is a part of their extremely well-known Slots3 line of games, and that means that you’ll have some of the best aesthetics available in the whole industry. This title is strong on the gameplay side as well with a balanced pay table and a whole lot of bonus features.

Format and Layout of the Safari Sam Slot Review

As a 30-payline video slot, this game has five reels and three horizontal rows. The paylines themselves only pay from the leftmost reel to the right, and it’s in your best interests to have all of them activated at all times. The reason for this is simple: The payout rate, known as the return to player percentage for slots, decreases when you have fewer than 30 paylines active. You’ll see a part of why when we look at the features down below and how each of them work. 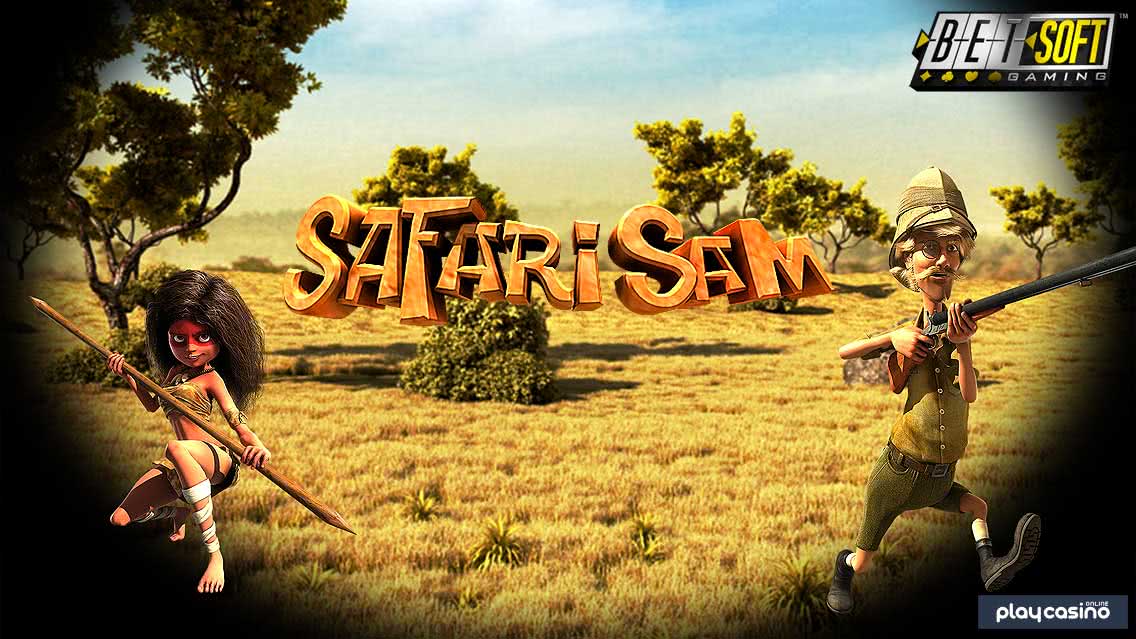 In terms of how you can pick your bet sizes, there are two options. Assuming that you have all paylines activated (which you should), you can wager up to five coins per line, which gives you a coin range of 30 to 150 per spin. Additionally, the individual values of those coins go from $0.01 to $1 each, putting the minimum wager at $0.30 per turn and the maximum at $150 per turn. It goes without saying that this is a sufficient range of available bets for players at all levels, so no matter if you’re a penny player or a high roller, you’ll have a bet size available that works for you. 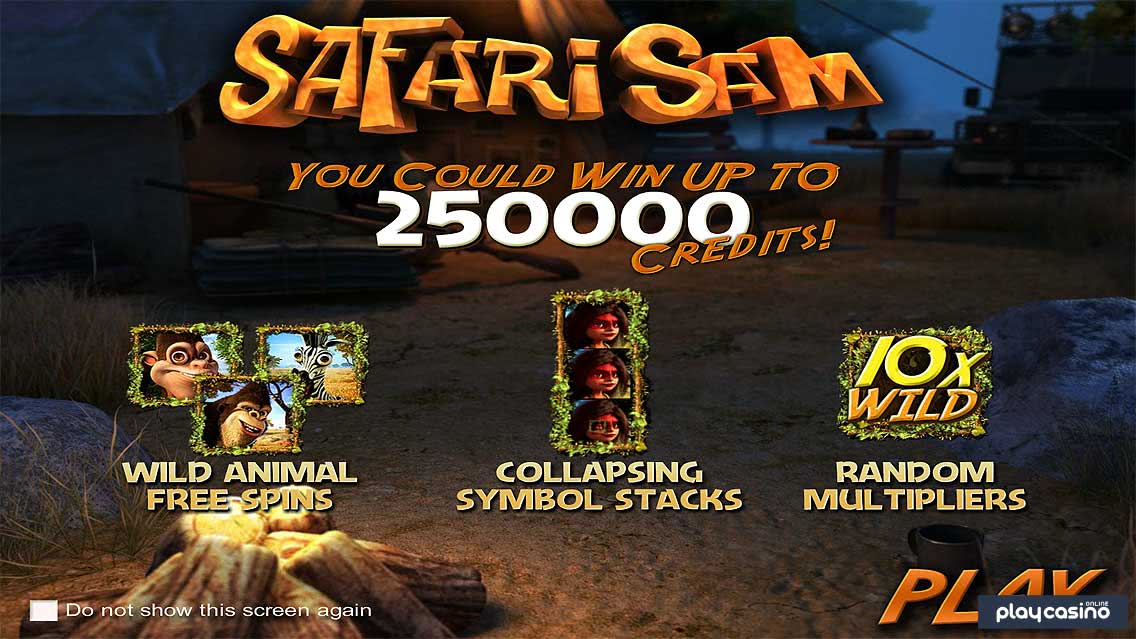 The first payline is the key to triggering a set of free spins in the Safari Sam online slot. If you get the zebra, the money and the gorilla all beside of each other, no matter the order, on this payline, then you will trigger a random number of free spins. This is an atypical way to trigger free spins, so we’re obviously happy about that. However, you’ll also have the option to pick one of these three animals, and that animal will become a wild symbol during the free spins. Moreover, all winning combinations that include at least one of that wild symbol will be doubled with a 2x multiplier. 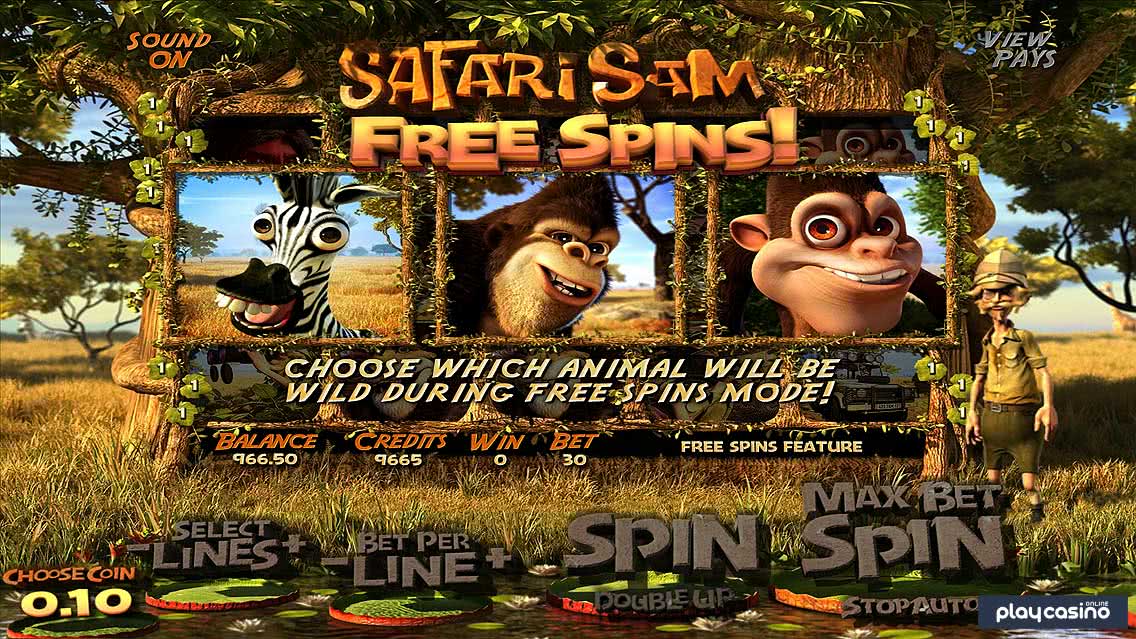 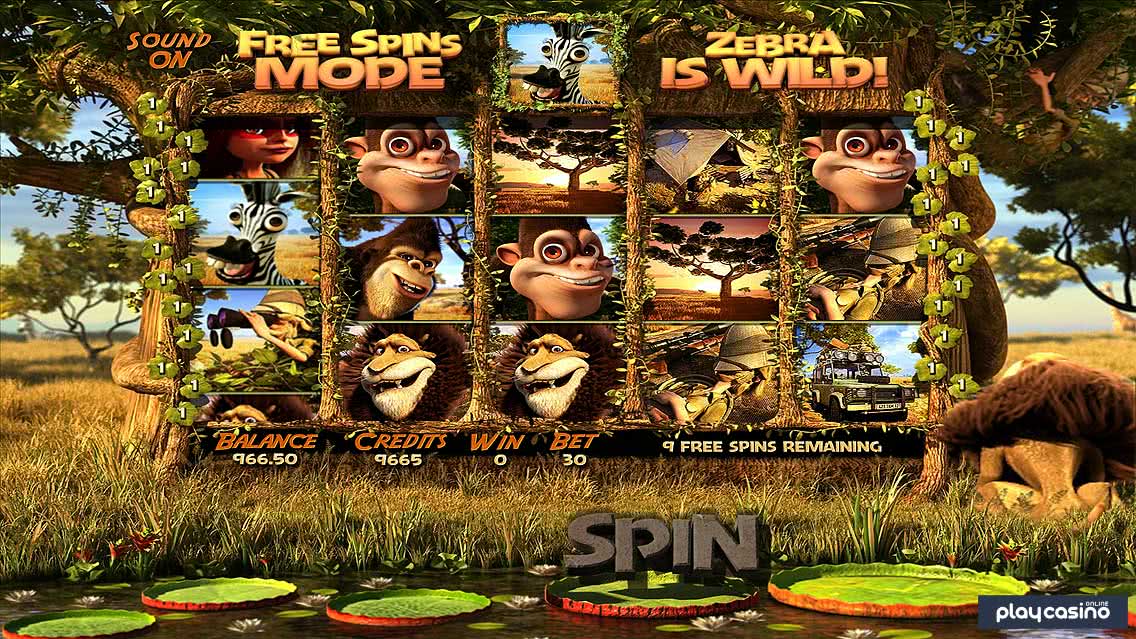 Wild symbols aren’t handled normally in the Safari Sam video slot. Instead of there just being a regular symbol that’s always wild, wild symbols are triggered at random on the reels after given spins. These random wilds also have multipliers of 2x, 3x, 5x or 10x that will apply to any winning combination that includes them. This is obviously a good opportunity to pick up extra wins you would have missed otherwise, but it also puts you in a position where you can get much larger payouts than usual thanks to the multipliers attached to these symbols. 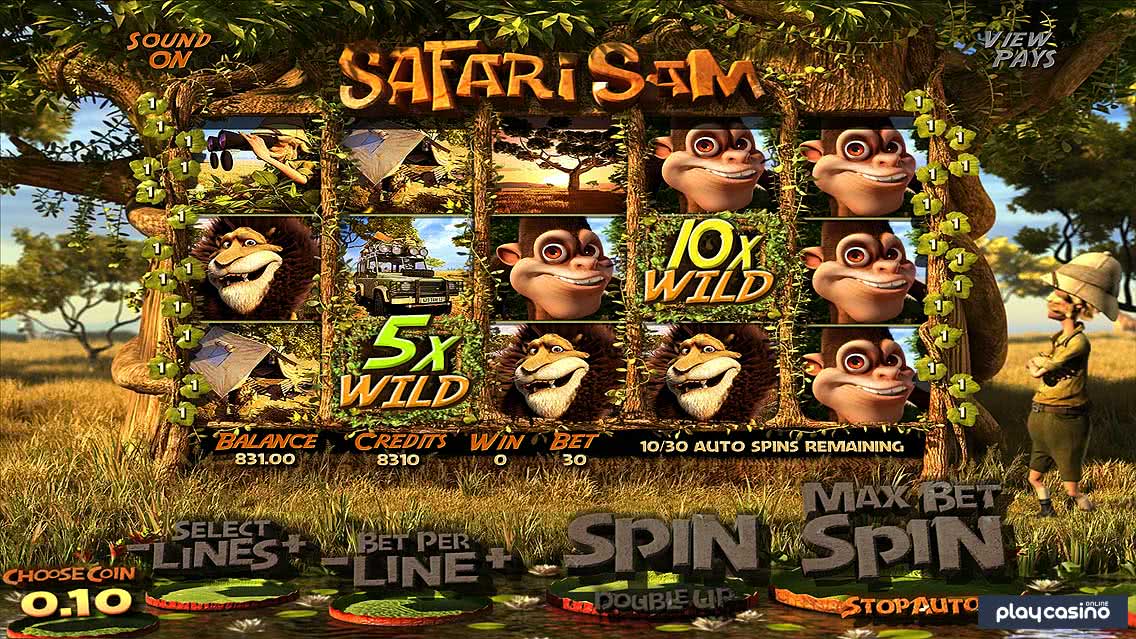 There’s a symbol that you can see on every one of the five reels that’s a large tree with a sunset behind it. This is the scatter symbol in this game, and it offers some pretty solid payouts. You can score 300x for five of a kind or 150x for four of a kind. A win of 90x can also be yours if you’re able to get three of a kind. Note that these scattered tree symbols do not have to show up anywhere in particular, on a payline or particular reels, to award you these prizes. That makes them more valuable than they might initially appear. 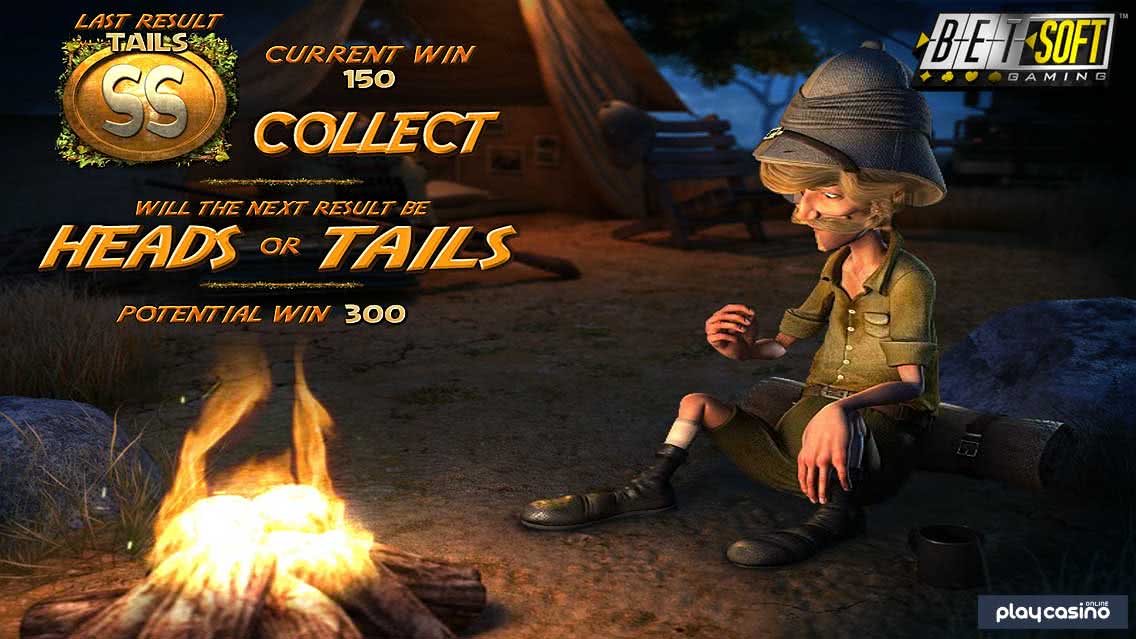 Something really cool about the Safari Sam video slot is that the vertical reels also act as shortened paylines in a way. If you get a stack of the same symbol with three of that symbol on a reel, then it counts as a three-of-a-kind win for that symbol. This gives five additional ways to win on every spin, but it’s important to realize that you can only access this feature if you have all 30 paylines activated. Additionally, they will collapse into one symbol to allow two more symbols to fall into place after your payouts are awarded, and this gives you yet another way to get paid.

The final bonus feature in the Safari Sam online slot is based around going on an actual safari, and you might have gathered that there would be a feature like this based on the name of the game itself. You’ll find a symbol of Sami with his binoculars looking out across some fields, and this is the bonus symbol. It activates like a scatter does, so three or more anywhere on the game board starts this feature up.

The mini-game itself is pretty straightforward. You’ll have different locations available on a map, and you’ll pick from them to get rewards. Whenever the collect word appears, that’s the end of the feature, and all of your combined winnings from the feature will be added to your account balance. 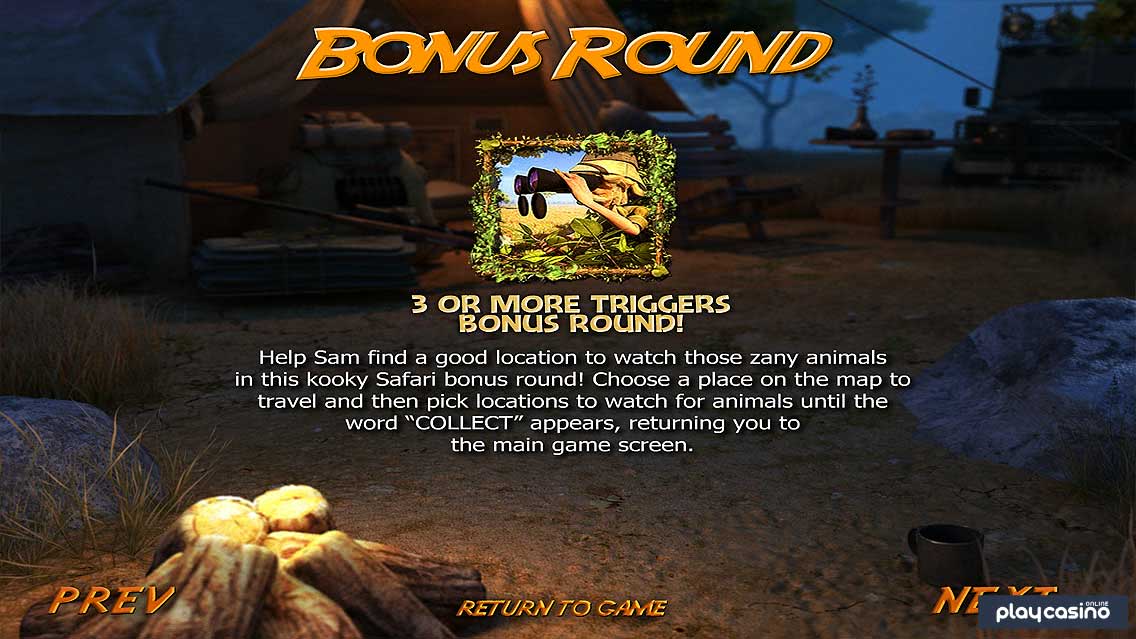 Sam himself is the top-paying symbol. Five of this guy will get you a 500x payout, but his other wins are also solid. They include 200x for four of a kind and 100x for three of a kind. Next up is the native woman, and she will give you a 300x payout for five on a payline. This is the second-largest prize in the game.

Four animals can be found on the reels as well. A payout of 100x is yours for lining up five of the lion symbol, and you can make it 50x for five of the gorilla. The zebra and monkey symbols each give you 50x for five as well, and those three with matching payouts are tied together in the feature we described above for free spins also.

Finally, there are three other symbols that give you 25x for five. These are the base camp tent, the jeep and sam sleeping beside of his rifle. 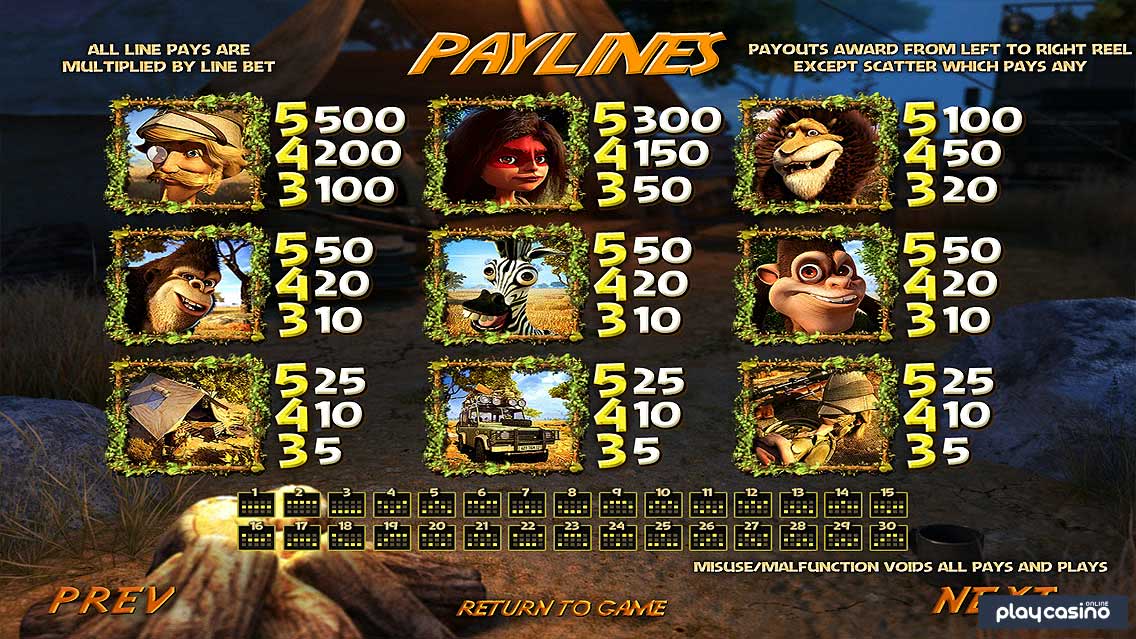 There’s no shortage of online slots that use themes based on animals or safaris. What we like about the Safari Sam slot is that it goes out of its way to be different than the rest of the sub-genre. This is one of the things that BetSoft is particularly good at overall, and as they have in this title, they achieve it through a tremendous mix of great graphics and strong, feature-based gameplay.