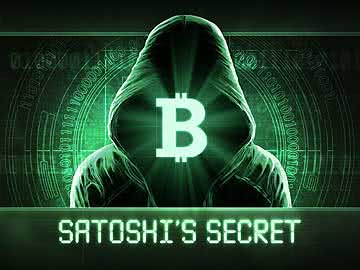 Endorphina’s Satoshi’s Secret video slot is based on the popular bitcoin cryptocurrency and features two bonus games based around this type of virtual currency.

Bitcoin was the original cryptocurrency, and it was based on blockchain technology that was originally invented by Satoshi Nakamoto, the name of a person whose true identity isn’t actually known. The smallest denomination of a bitcoin is called a Satoshi in honor of him, and that’s where the name of the Satoshi’s Secret slot comes from. Endorphina has done an excellent job in putting together a game with atypical gameplay based on this atypical currency in a way that gives players a lot of ways to win four-figure payouts along with multiple bonus features.

Format and Layout of the Satoshi’s Secret Slot

The first thing you have to know about this game’s format is that it’s larger than most video slots with six reels and three rows. However, it has only 20 paylines, which is well within the bounds of what’s normal in these games, and it also pays in both directions, giving you twice the opportunity to win. While you have the ability to play for fewer than the maximum of 20 paylines, we strongly recommend against it so that you get the best payout rate available. 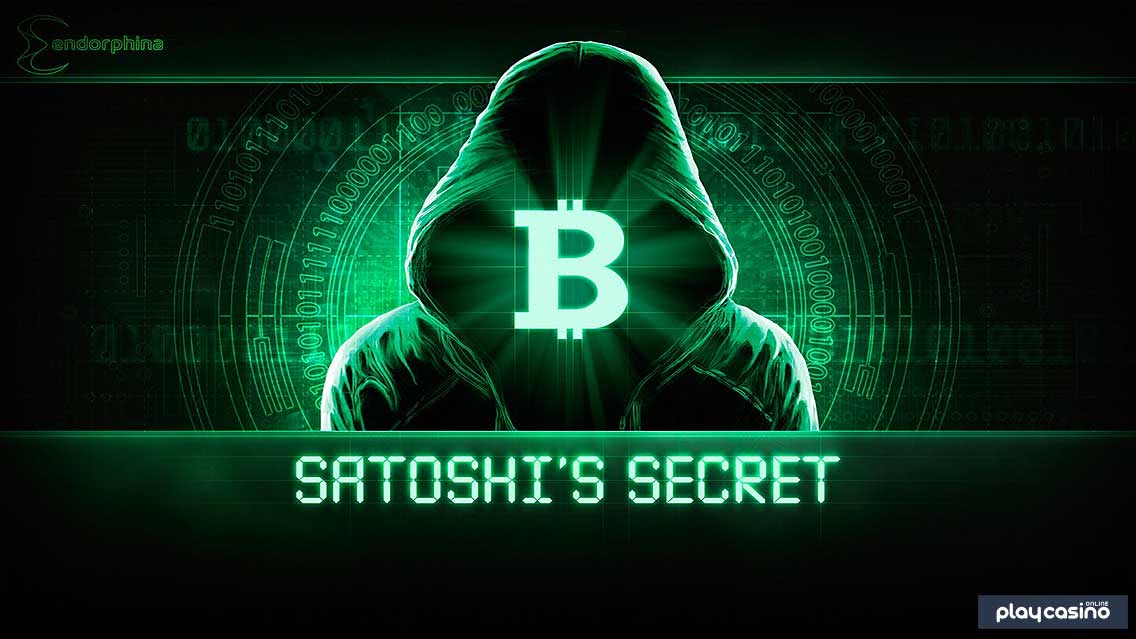 To manipulate your bet size, you can choose coin sizes in the top-left corner or the number of coins per payline in the bottom-left corner. The placement of these two controls is typically right beside of each other, and it’s easy to miss the ability to change coin size if you aren’t familiar with this way of laying out game controls that’s often used with Endorphina-powered online slots. Coins go from $0.01 to $1, and you can bet up to five coins on each of those 20 paylines, so you get a total betting range of $0.20 to $100 per turn. 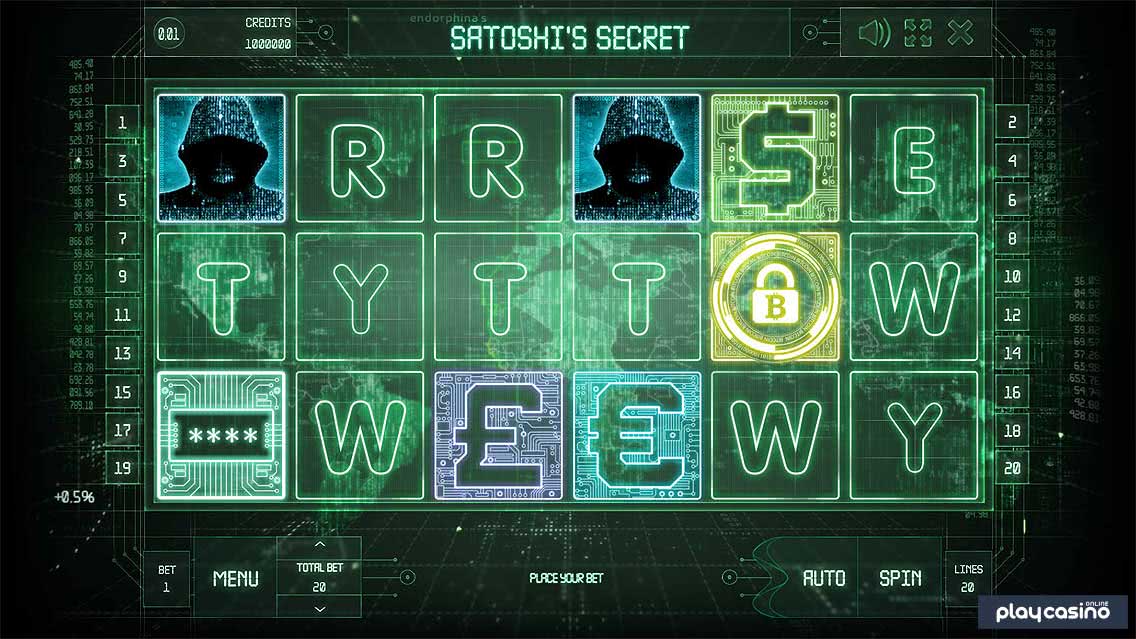 To start things off, you’ll notice the Satoshi symbol appear on all six reels of this game. He has on a hood so that you cannot see his face to reflect the fact that no one actually knows who he is, but he’s responsible for some of the largest payouts in the game. Six of a kind earns 5,000x, and five of a kind will get you 3,000x instead, which ties for the second-largest win in the slot. This symbol can also earn 500x or 100x if you land four-of-a-kind or three-of-a-kind winning combinations.

It’s important to note that this is the only regular-paying symbol in the game that does not get represented by the wild symbol, so you’ll have to make these combinations the regular way.

Because this game pays both left-to-right and right-to-left, the wild symbols are worth a bit more than usual because they can more easily become involved in multiple winning combinations that you would have missed without it. 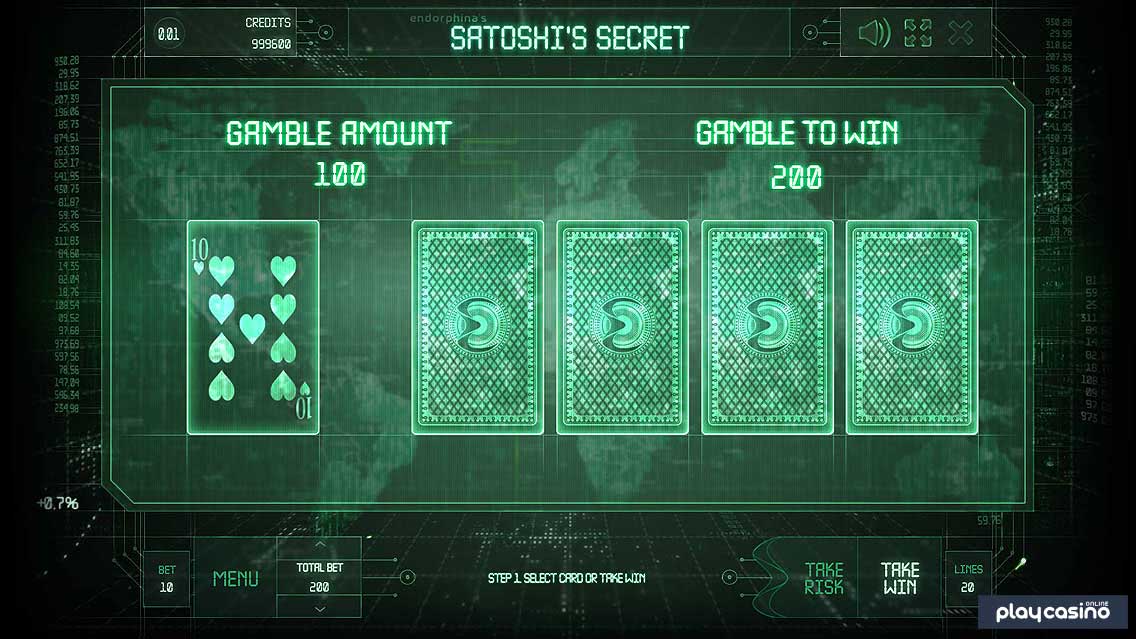 One of the things that the Satoshi’s Secret video slot really captures about the bitcoin cryptocurrency is that trading it is a big part of the culture that surrounds it. Many people buy and sell it to try to turn a profit, and that’s the kind of thing that they have incorporated into the Trading Bonus round. You trigger this by getting four of the bitcoin bonus symbol on the middle four reels of the game.

The feature starts by giving you a balance of 30 times your total bet size. You can then simulate the trading of bitcoin on an open exchange until you decide to either cash out or you go broke. If you don’t want to risk anything in this game, you also have the option to simply take your 30x win and go back to the regular gameplay.

This market is played out on what actually looks like a classic slot with three reels and three rows. You can also accumulate something called “safe profit,” which allows you to cash out something even if you go broke during this feature. It’s an interesting spin on bonus rounds that plays perfectly into the virtual culture that surrounds bitcoin, and that goes to show that Endorphina really put the time to understand what they were doing here.

QWERTY is a style of keyboard that’s used a lot in the Western world, and most people consider it the standard keyboard layout. The letters Q-W-E-R-T-Y can be found on the reels, and if you spell out the full six-letter word from left to right on the reels, then you trigger the QWERTY bonus feature.

This feature centers around trying to hack into some accounts. On the green security level, you have a great chance to hack the account, but your winnings will be the lowest. The yellow gives you a trade-off between a somewhat lower chance to win than the green level, but your winnings are larger when you are successful. Finally, the Satoshi’s Secret online slot bonus feature has a red security level. This red level pays the best prizes when you win, but you have the lowest chances of successfully hacking the virtual account with this setting.

You get to pick between the three levels to try to hack, and you’ll accumulate your winnings as long as you continue to successfully get into the accounts and get funds out. 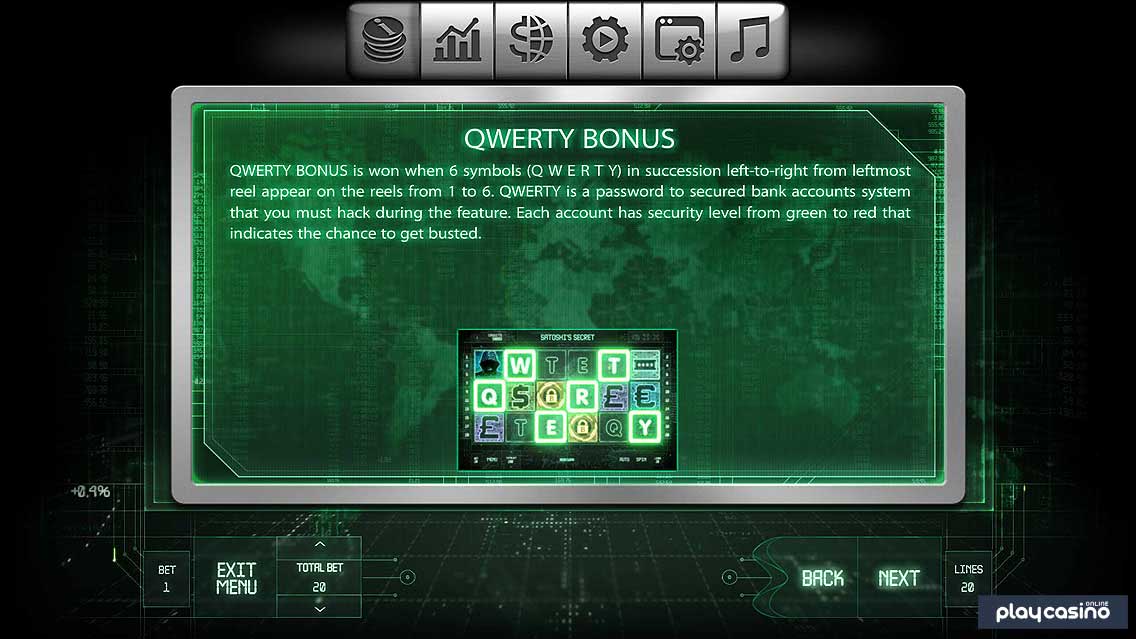 There are three main fiat currencies in the world. Those are the British pound, the euro and the US dollar. They correspond to the three highest-paying symbols in the game after Satoshi himself. The British pound symbol is in a shade of blue, and it pays 3,000x for six of a kind, which ties for the second-highest payout in the Satoshi’s Secret video slot.

The other two currency symbols give the same payouts as each other. They are the green euro symbol and the yellow US dollar symbol. Six of a kind of either of these on an activated payline is worth 1,000x. Like the Satoshi symbol, all three of these pay for three of a kind or more. However, all three of these can also be substituted for by the wild symbol, which is something that cannot be said about the bitcoin creator. 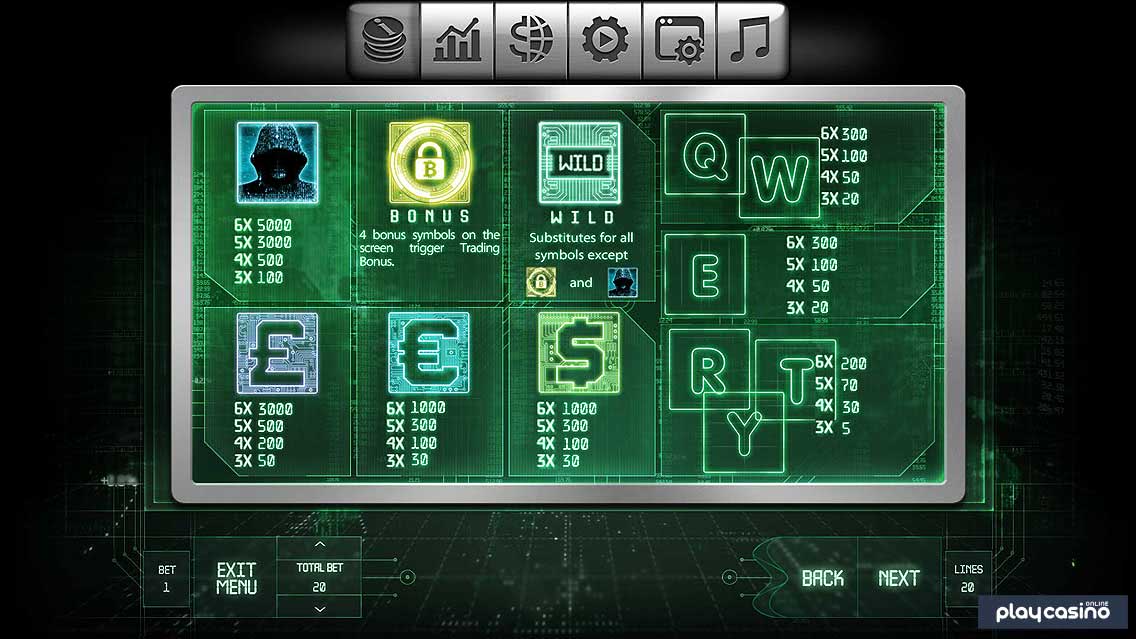 Endorphina did something really neat for the low-level symbols in the Satoshi’s Secret video slot. Instead of using letters for card rank symbols, they used letters in the phrase “QWERTY,” which is the most popular style of computer keyboard in the world. If you want to see where the name comes from, look at the top-left corner of the letters on your keyboard, and you’ll most likely see Q-W-E-R-T-Y spelled out as the first six letters in a row on that line.

The T and Y letters get you paid 200x for six of a kind. All four of the others are worth 300x. These are decent enough payouts for the lowest symbols in the entire video slot.

With the Satoshi’s Secret online slot, Endorphina has built a game based on a theme that no other software company has really touched. It’s popular for this reason alone, but it’s also popular and gets played a lot because it has strong gameplay with lots of ways to hit big payouts. The multiple bonus features stand out as well, so there’s a lot to look forward to when you play it.