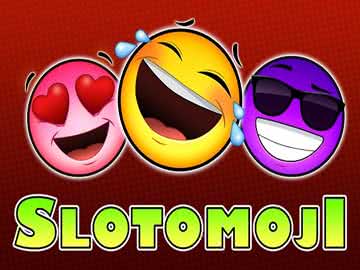 Endorphina’s Slotomoji slot is based on a set of emoticons with a chance to win free respins with escalating multipliers.

Emoticons can be found everywhere, and that’s why Endorphina created the Slotomoji slot. This game has a 2D style of animation that fits with the style of most emoji symbols out there, and it’s a bit of a departure from the super high-quality graphics that you see in other games. However, it fits the theme, and you’ll also find that it has a style of play that works as well based on a set of special characters.

Format and Layout of the Slotomoji Slot

Right away, players will see giant emojis on the screen in a five-by-three grid with five reels and three rows. There are 10 paylines in this game as well, and the bet sizing is extremely flexible. You can wager between $0.10 and $100 per spin with a couple of different options. First, you can adjust the number of coins to be between one and ten per payline. Second, you have coin sizes that range from $0.01 on the low end to $1 on the high end. This makes it easy to be precise with the bet size that you want. 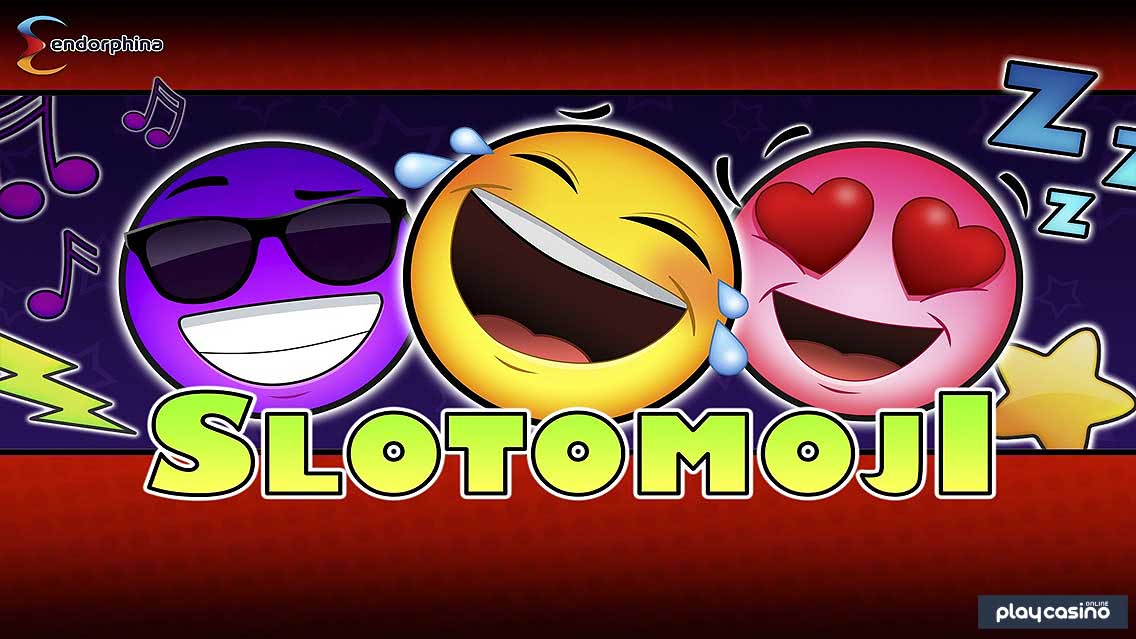 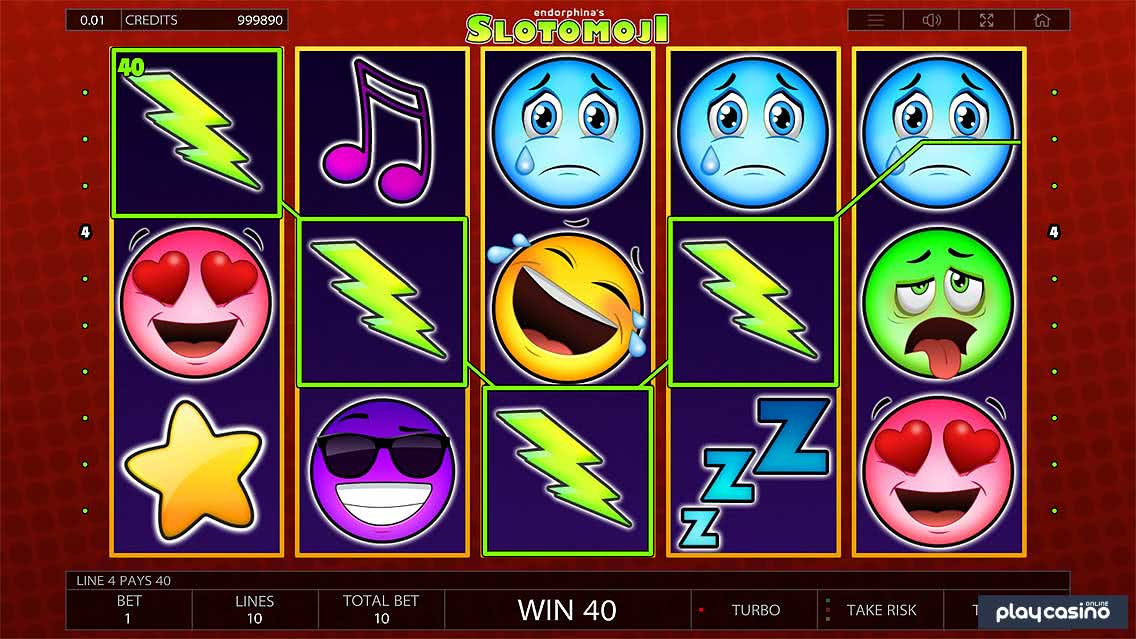 One source of a lot of value in this game is the set of expanding wilds. These consist of three characters who appear on the middle three reels. You can get the ballerina, the dancing disco man with an afro and gold chain, or the samurai in his armor with his sword. They all function exactly the same, and they will all cover the entire reel whenever they appear.

The wilds in the Slotomoji online slot don’t get their own payouts because they only appear on the second, third and fourth reels. With that having been said, they give a lot of value and substitute for all other symbols in the game. 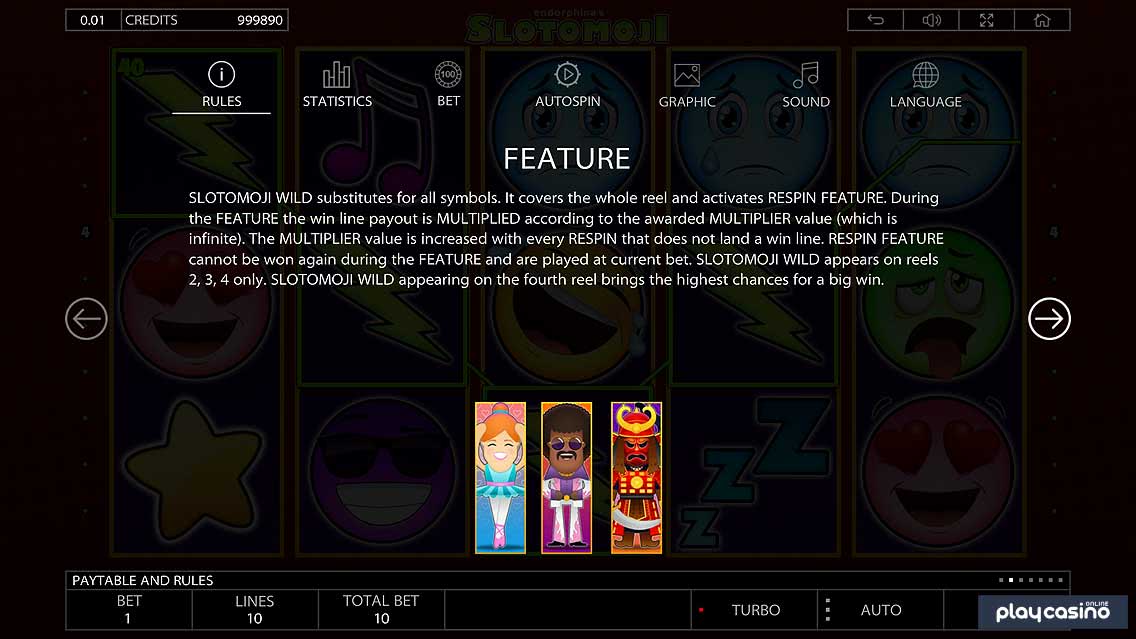 The main bonus feature in the Slotomoji video slot is based on getting respins. Whenever you get a wild symbol on the reels, you are paid out normally for that spin, and then the respin feature begins. What happens is that the multiplier will increase by one for each respin until you hit a winning combination. If you miss on the first respin, the multiplier increases by one, and you get another respin. If you miss on the second, the same thing happens, and this continues until you hit a winning spin. 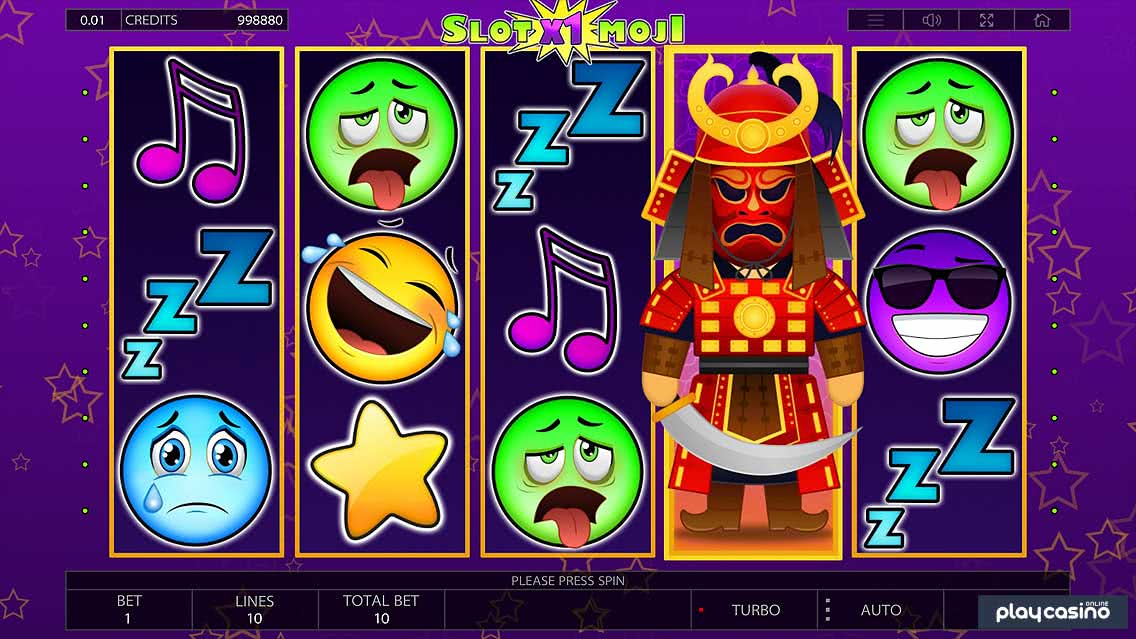 This feature is one of the times that you would actually prefer to hit a big losing streak so that you can run your multiplier up. It’s also worth pointing out that you get the most value from this feature when you get the samurai wild on the fourth reel because you’re more likely to force the game to give you a four-of-a-kind or five-of-a-kind win.

We should point out that your wild symbol will stay in place with this entire respin feature as well, and it will continue to cover the entire real that it was located on. 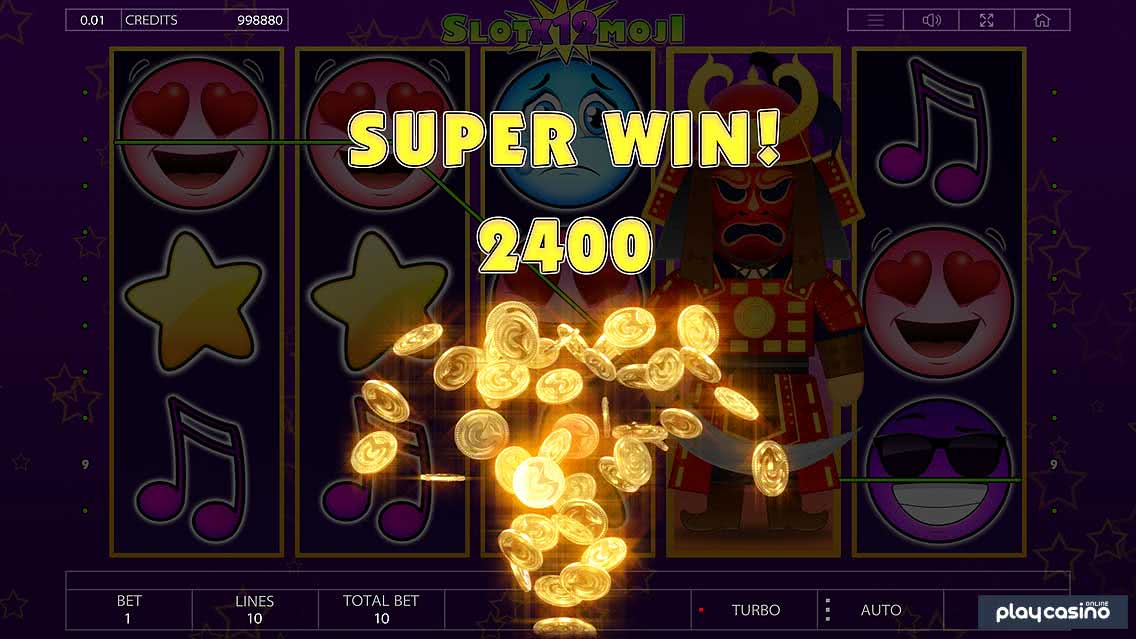 The base pay for the largest win in the game is worth 1,000x. This is before any multipliers that can come during the respin feature. This payout is won from five of the yellow smiley that is laughing so hard its crying, which is appropriate considering it’s one of the most popular emojis used. Players can also take down a 800x payout for five of the purple smiley face wearing sunglasses and smiling.

Two different symbols allow you to pick up a solid 500x win for five of a kind. The first is the pink, smiling emoji with hearts for eyes that is in love. The second is the red one that is very angry. Five of either of these gives you 500x, but you can also get four of a kind of the top emoji symbol to get this prize as well. 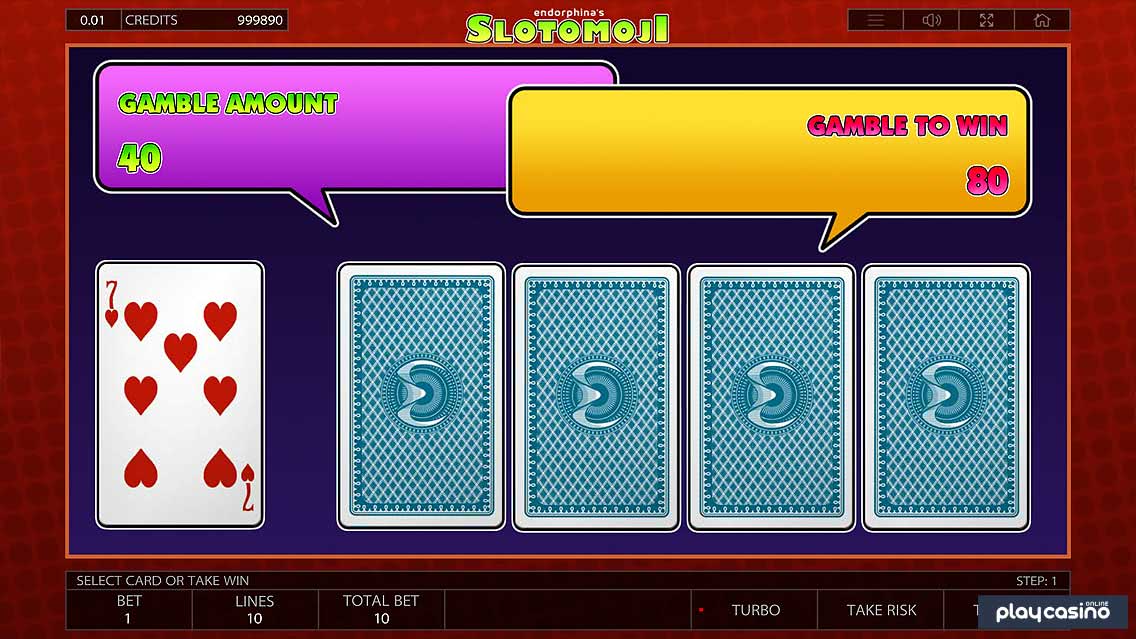 On the other hand, you have the star, lightning bold, music note and “ZZZ” sleeping symbols that are the four non-smiley face symbols in the game. These alternative emojis all have the same payout of 100x for five of a kind. They also have the same 10x win for three of a kind. The difference is in their four-of-a-kind payouts, which vary from 40x to 30x depending on the symbol used to win. 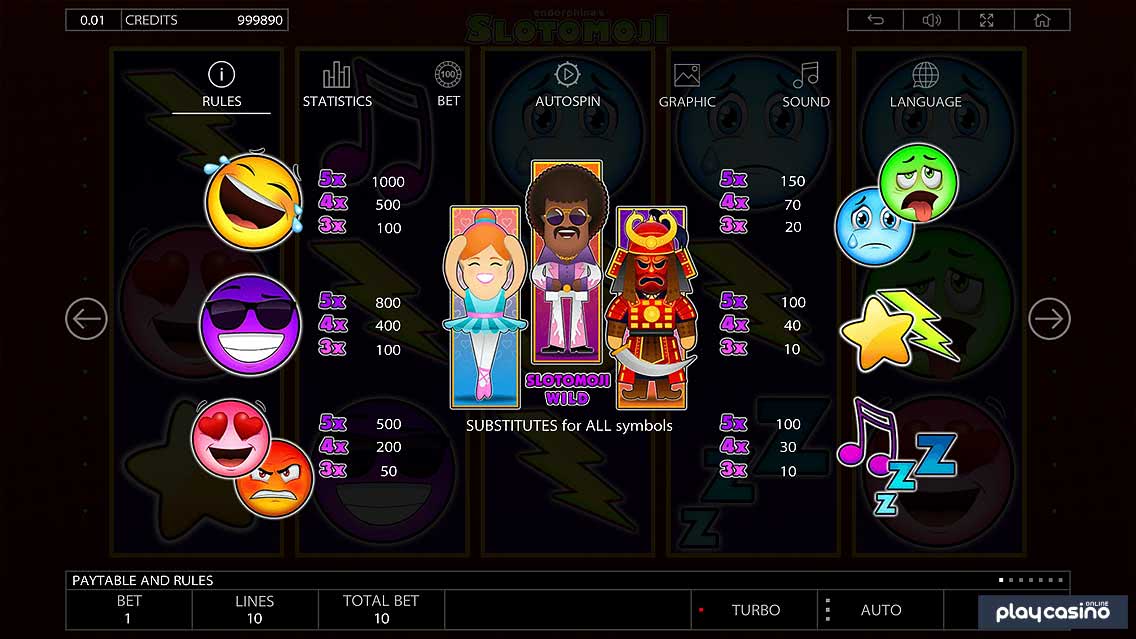 We will be the first to admit that this is not the most exciting, feature-packed game out there. That’s because it’s not meant to be. It’s designed to have a play style that’s closer to that of older, classic slots with a simplified approach to gameplay that’s based on giving balanced value from the regular pay table instead of a bunch of features.

The bonus feature essentially amounts to getting a random win on the pay table because you’re forced into getting an extra payout, and the expanding wild symbols help you to get more wins than you normally would from your regular gameplay. These aspects combine to create a low-volatility style of play.

With that having been said, you still have a chance for really significant payouts with the increasing multipliers in the respin feature. Because there is no maximum to what that multiplier can be, you could end up with extremely large wins, especially if you hit five of the laughing smiley.

It’s clear that you see emojis just about everywhere you go at this point between advertisements, merchandise and communicating over smartphones and the Internet. For this reason, it makes complete sense that Endorphina would use them as the subject of an online slot.

The gameplay of this slot is based on the classic style, and players who prefer that type of simplified gameplay will enjoy this slot a lot. However, it’s clearly not for everyone, but that’s okay because Endorphina has many different slots in different styles to appear to a wider range of players.

If the Slotomoji video slot isn’t for you, that’s completely fine, but it will definitely appeal to a significant audience because of the combination of the atypical yet topical theme and the low-volatility gameplay with chances to win incredibly large prizes thanks to the unlimited multipliers in the bonus feature.