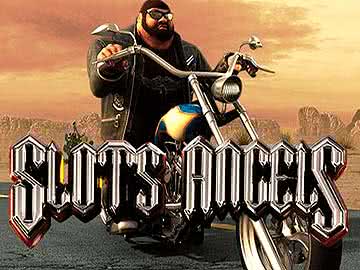 The Slots Angels online slot by BetSoft brings players face-to-face with a set of bikers across 30 paylines of action. Free spins, re-spin features, multipliers and a progressive jackpot all come together for a very exciting look at biker culture in this game.

The Slots Angels video slot is an example of BetSoft taking a biker theme and pulling it together in a way that showcases both the gameplay values and visuals. On the graphical side, this title just looks incredible, and it’s hard to do it justice in words. It uses 3D graphics with a number of different characters who all look great. Gameplay-wise, it has a balanced enough pay table with a lot of value-oriented bonus features. When you combine these two aspects of the game, you get the type of experience that players tend to come back for more over on a repeated basis.

Format and Layout of the Slots Angel Slot

There is a total of 30 paylines in this game, and this comes across five reels and three rows of symbols. This is enough ways to win that the game stays exciting, but it’s not so many that it becomes frustrating to try to keep up with them all. While this game does give you a chance to drop things down to a number of lines below the maximum, it’s a bad idea because it lowers your chances of winning by dropping the RTP percentage down, and that’s not something that any players want. 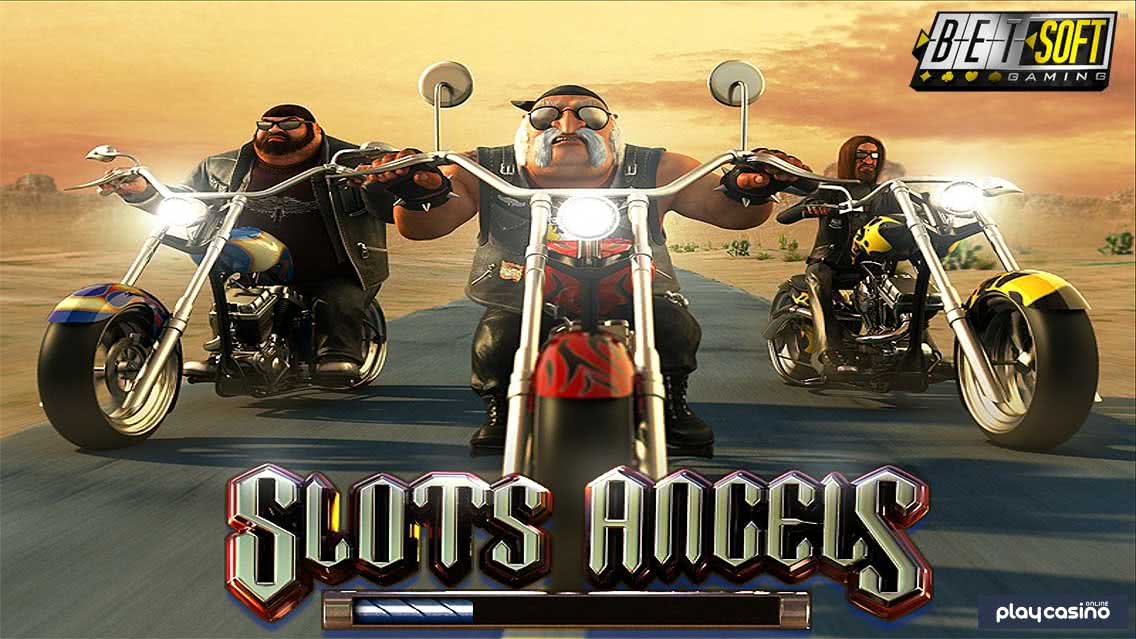 Betting is determined by choosing coin sizes to wager on each payline. With 30 paylines activated and the ability to bet as many as five coins on each of those activated lines, your betting range is 30 to 150 coins per turn multiplied by the value of the coins themselves. Those coins can be worth $0.01 to $1, and that puts you in position to get total bet sizes that are worth $0.30 up to the $150 level. This is clearly plenty low enough for penny players and low stakes slots fans to be comfortable, but it’s high enough so that you can have plenty of solid options if you play medium or high stakes only. 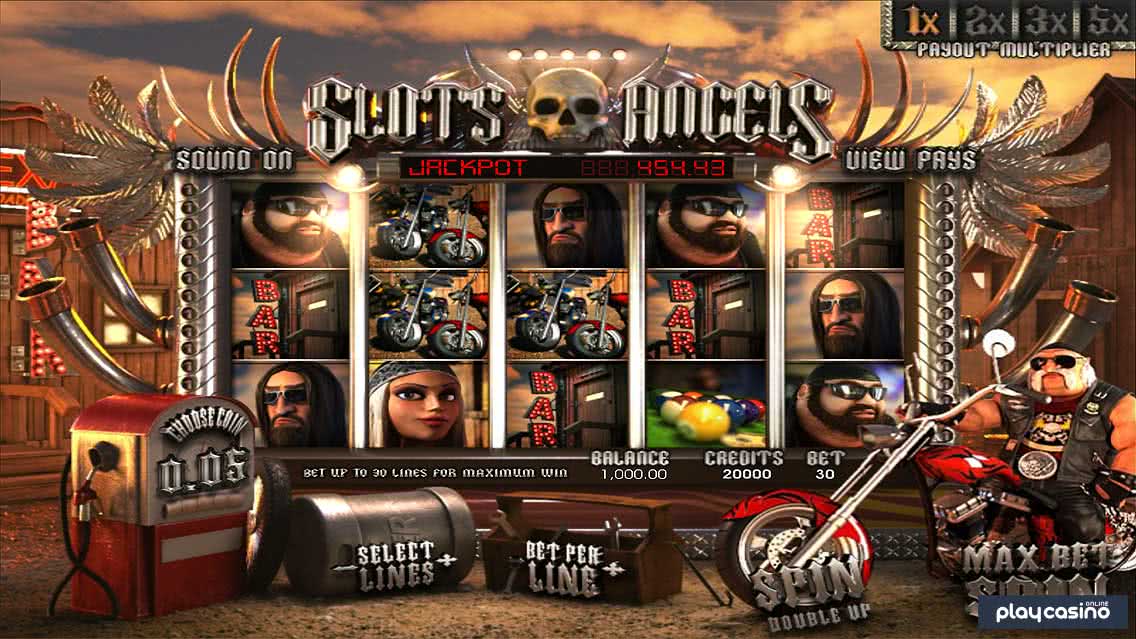 In the Slots Angels online slot, there are different features that will come up with different frequencies. The one that you’re most likely to see the most often is a re-spin feature, and here’s how it works. When you get a winning combination, it’s paid out normally. From there, the middle reel will re-spin to give you a chance to win again. If you do, then the re-spins keep going, but after each re-spin, you’ll see the payout multiplier meter in the top-right corner increase from 1x to 2x to 3x to a maximum of 5x. Your wins on the subsequent re-spins are multiplied by this amount, and going on a bit of a run with this feature can give you several serious pays all on the same paid spin.

You can get a set of free spins in this game as well. All you need to do is line up three or more of the bottle symbols, which appear on the first, second, fourth and fifth reels. That’s every reel but the middle one. When you do that, you start the free spins mode. The center reel becomes completely wild during this feature, and you’ll see different bikers pull up to the sides of the reels to cheer you on while you rack up wins. With the middle reel held completely wild during this feature, it’s much easier to get winning combinations than you would normally. 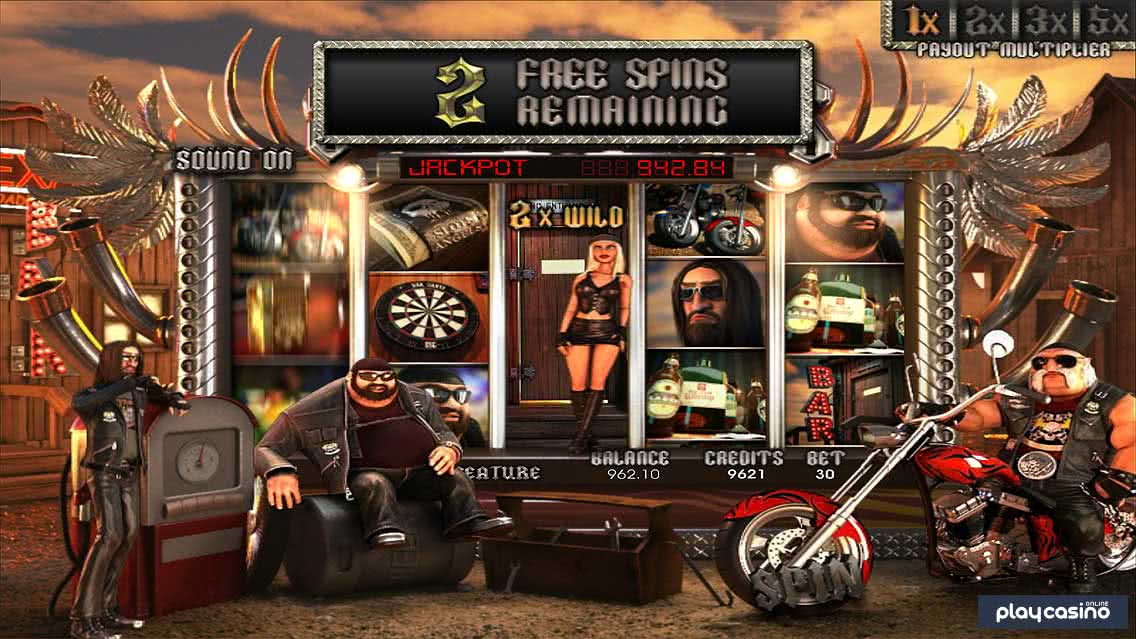 Playing darts is a popular thing to do in biker bars, and the Slots Angels online slot captures it perfectly with the darts click me feature. When you get three dartboard symbols on the first, second and fifth reels, you’ll be taken to a screen with three different dartboards. Pick one of the three to get an instant win. The better your pick, the better your prize, and we really like seeing different elements included in the feature set like this. 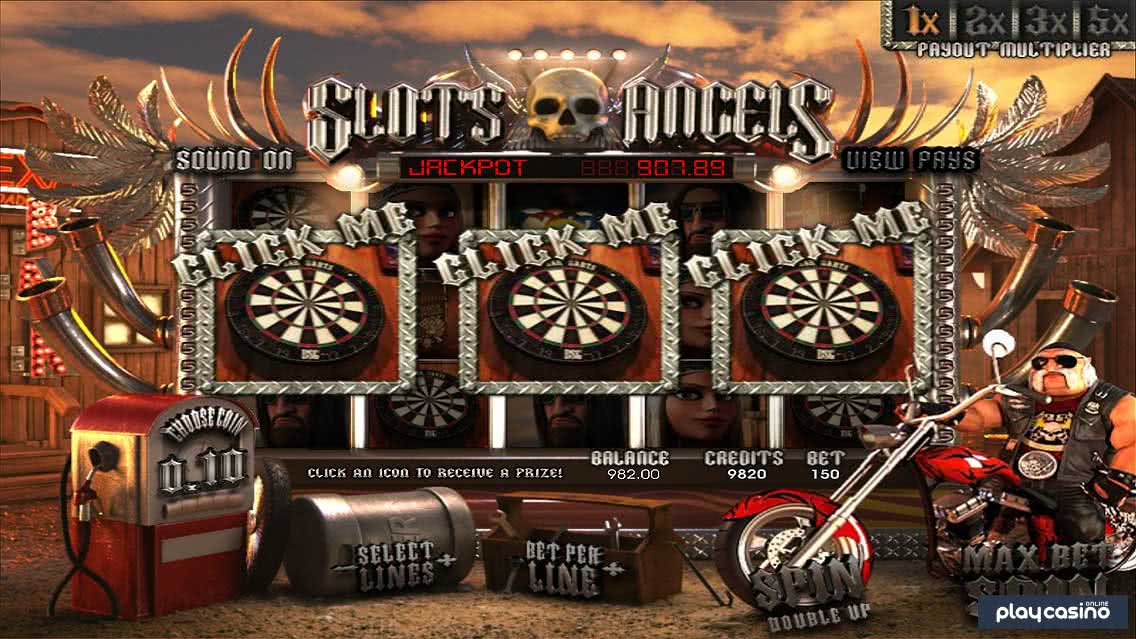 The lead biker is the one with the gray beard and sunglasses in the Slots Angel video slot, and getting him on the first two reels and the last reel all at the same time takes you to a racing bonus feature. You get to pick between three bikers who you think will win the race, and if you pick correctly, you get better wins than if you don’t. However, there are several chances to win prizes here because you’ll get paid based not only on who wins the whole race but who takes the lead at different places during the race as well. This makes actually watching the race even more exciting. 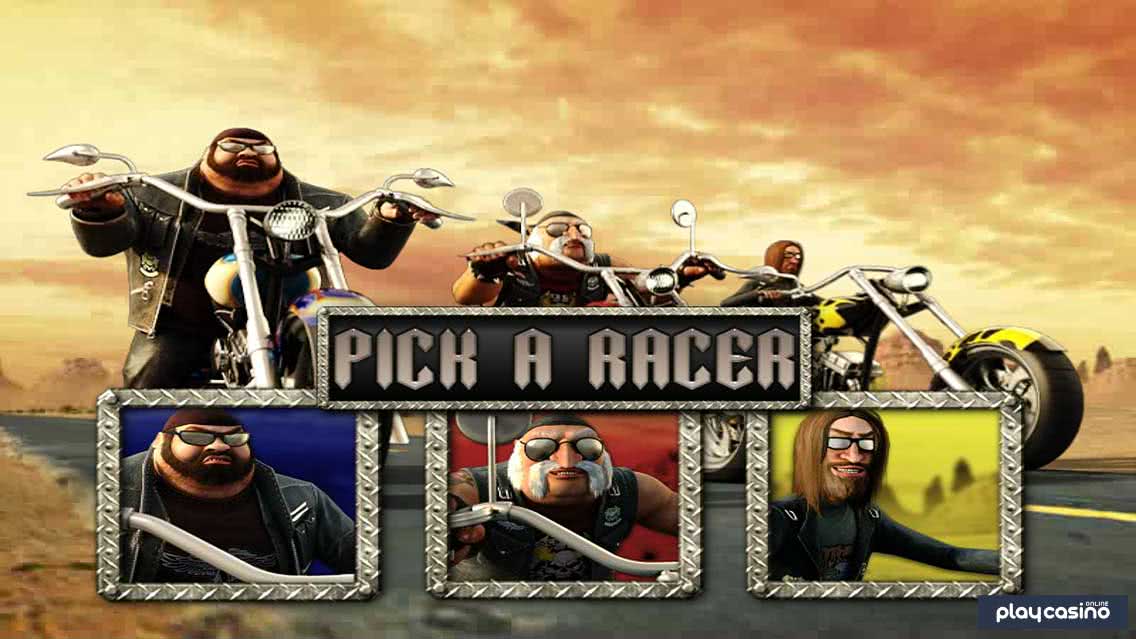 If you line up five of a kind of the main biker symbol with a dark beard and sunglasses on the first payline, then you’ll trigger the progressive jackpot. This jackpot is not available during re-spins or free spins. Aside from that, you’ll only be able to win if they show up on the first payline, and if it doesn’t, then you’ll be given the regular prize for this combination. 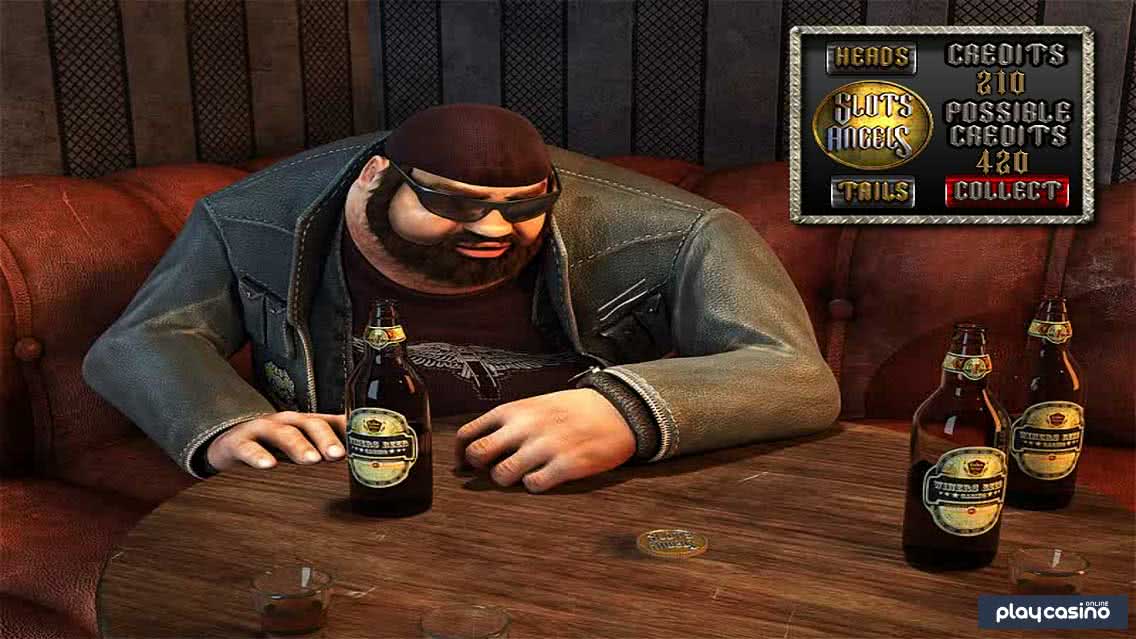 The same biker who awards the progressive gives you a 300x win if you get five of a kind of him anywhere else on the game board. Five of the other male biker with a long face and sunglasses with long hair awards you 200x for five. Finally for the character symbols, the woman earns players 100x for five of a kind.

Five of the bar symbol on an activated payline gives players a win of 75x. You can also score 50x for five of the motorcycles, and it becomes 20x for five of a kind wins of the lighter or the pool balls. Rounding out the bottom of the pay table is the money clip full of cash, and getting five of this symbol will give players a 10x win. 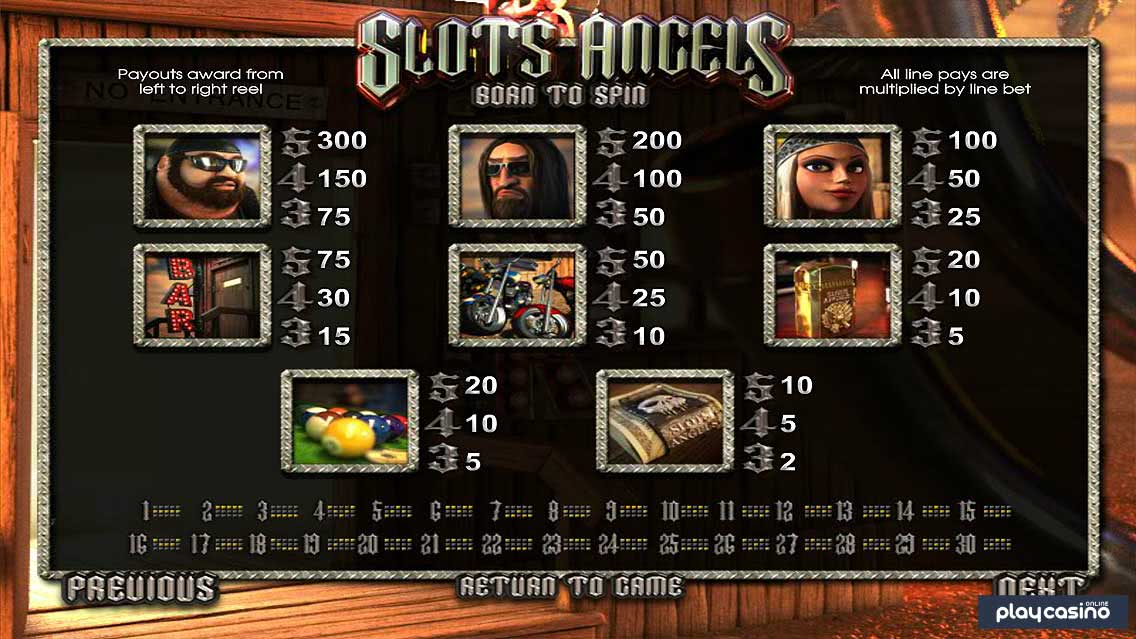 There aren’t a lot of games in the online slots world that deal with bikers, and that’s actually kind of surprising because it seems like a motif that some software companies could get a lot of milesage out of. Regardless, the Slots Angels online slot by BetSoft brings together some great features with a reasonably balanced pay table and top-tier graphics to create an experience for players that has made this game one of their most popular titles in their overall history. It’s been around for a while and still has a serious following today, and that’s an achievement that can’t be ignored.