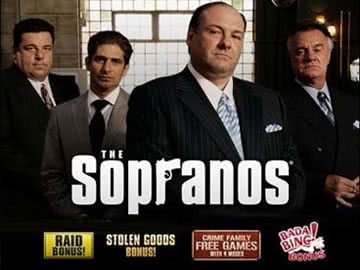 The Sopranos is a video slot by Playtech based on one of the most popular television shows of all time with 25 paylines and plenty of footage from the show.

The Sopranos was the very first show that was produced in long-form episodes without commercials, and it became the forefather for tons of television shows that came after it like The Wire, Game of Thrones, etc. Playtech produced a slot version of The Sopranos that uses a lot of the major characters of the show, tons of film and scenes from the show and a great overall aesthetic appeal. Every single aspect of this game has been crafted in a way that creates a cohesive and immersive experience that fans of the show or of video slots in general will absolutely love.

Layout of The Sopranos Slot

There are 25 paylines of action for this game. They’re found across five reels and three rows, which creates a traditional 15-symbol grid. You’re able to play with fewer than 25 paylines, but you never should because of how bad it hurts your rate of return.

For adjusting your bet sizes, you should use the line bet options instead. You can wager from $0.01 to $10 per payline. They don’t use a combination of different coin sizes and numbers of coins in this game, however. Instead, you simply pick from a variety of different bet sizes for each payline, and you multiply that by a factor of 25 paylines to get the total range of available wagers. This runs from $0.25 to $250, accordingly.

The character of Tony Soprano is the main guy throughout the television series, and it’s no surprise that he’s the most important symbol in the game based on the television show that bears his name. Five of a kind earns you 3,000x for this wild symbol, and you can even pick up 500x for four of a kind. The prize for three on a payline is 300x, and you’ll also be able to pick up 10x for a simple two-of-a-kind win.

This wild symbol substitutes for all of the regular-paying symbols. It does not substitute for any of the three scatter or bonus symbols, including The Sopranos logo, the stolen goods symbol or the Bada Bing! club symbol.

There is a logo symbol of The Sopranos, complete with a sideways pistol for the “r” in the name. This is a scatter that gives solid payouts on its own that are based on a multiple of the total bet size. Five of a kind gets you a 100x win, which is like a 2,500x line bet pay, so it’s the second-largest win in the game behind five of Tony. Four of a kind earns 10x, and three gets 3x.

You’ll find four different game modes for the free spins that you earn for three or more of this scatter on the reels. You’ll need to progress from solider to capo, boss and family by unlocking the modes based on how many scatters you’ve used to earn the feature. You’ll get between 10 and 25 free spins depending on which of the four modes you get, and there are different extras added onto the features. These extras include improved symbol sets on the reels (ie: no low-tier symbols), wild multipliers, extra wilds, additional wilds, overall multipliers and more.

It’s worth noting that the free spins cannot be re-triggered with the scatters during the free spin mode, but they do give you scatter payouts as usual.

The Bada Bing! is the strip club where the Sopranos crime family have their offices, and it’s their base of operations for all intents and purposes. If you get the three Bada Bing! symbols to show up on the middle three reels, then you’ll be taken to a bonus feature where there are up to five people who will get a chance to meet with Tony. You’ll see scenes play from the show, and the outcomes of those meetings will give you instant wins. You can win several times your total bet size in this feature, and it contains a lot of content from the show itself.

There’s a green storage container that shows up on the first and last reels. If you get them both on the reels at the same time, you get taken to what amounts to a pick a box-style bonus feature. There are ten different containers listed on the reels, and you get to pick up to three of them. The prizes are worth up to 2,500 times your line bet amount, so you can end up with some pretty significant wins from this feature.

The members of this crime family are constantly under threat of being raided by the authorities. There’s a bonus feature that can be triggered at random in The Sopranos video slot based on these raids. You’ll get a chance to hide envelopes full of cash in four different locations: the floor, an outdoor container, a closet and a ceiling tile. The authorities come in and raid two of the four locations, and if you successfully keep the cash out of their hands, you get it back in the form of a payout.

Other Top-Level and Mid-Tier Wins

The card rank symbols in this game are stylized in the font used for the title and credits of The Sopranos slot. The A and K both get you a 100 win for five of a kind. You can score 75x for five of the Q symbol. Both the J and 10 symbols earn 50x for five. Each of these five symbols will have other decorative characteristics added on like poker chips, drinks, watches and cigars, and this makes them fit into the theme extremely well.

The Sopranos is a great online slot that’s one of the best video slots ever produced based on a television show. Because this is clearly one of the best TV shows of all time, it was only fitting that Playtech make a game this good for it. It incorporates tons of content from the show itself while giving players a very immersive experience with lots of ways to get paid. Overall, it’s easy to see why this is such a popular game that has stood the test of time.