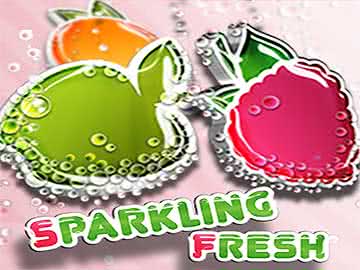 Sparkling Fresh is a video slot by Endorphina based on classic slot motifs and straightforward gameplay with a 5,000x top jackpot.

One way to compare different video slots is to put them on a spectrum based on the types of features they have. Older, classic slots often had no features at all, and modern, video slots sometimes have so many features that it’s difficult to keep up with them all. Endorphina’s Sparkling Fresh slot falls on the end of the spectrum with no real bonus features because it’s based on an older style of gameplay. It’s the most popular game they have of this play style.

Format and Layout of the Sparkling Fresh Slot

The basis of this game and its entire feel all start with the format. There are three rows of symbols across five reels, and that clearly makes it a video slot. With that having been said, there are just five reels, and that’s one of the oldest styles of video slots that you’ll find anywhere. This isn’t an old game in the sense that it’s not from the 1980s or something, but it does use this older approach to the payline structure. 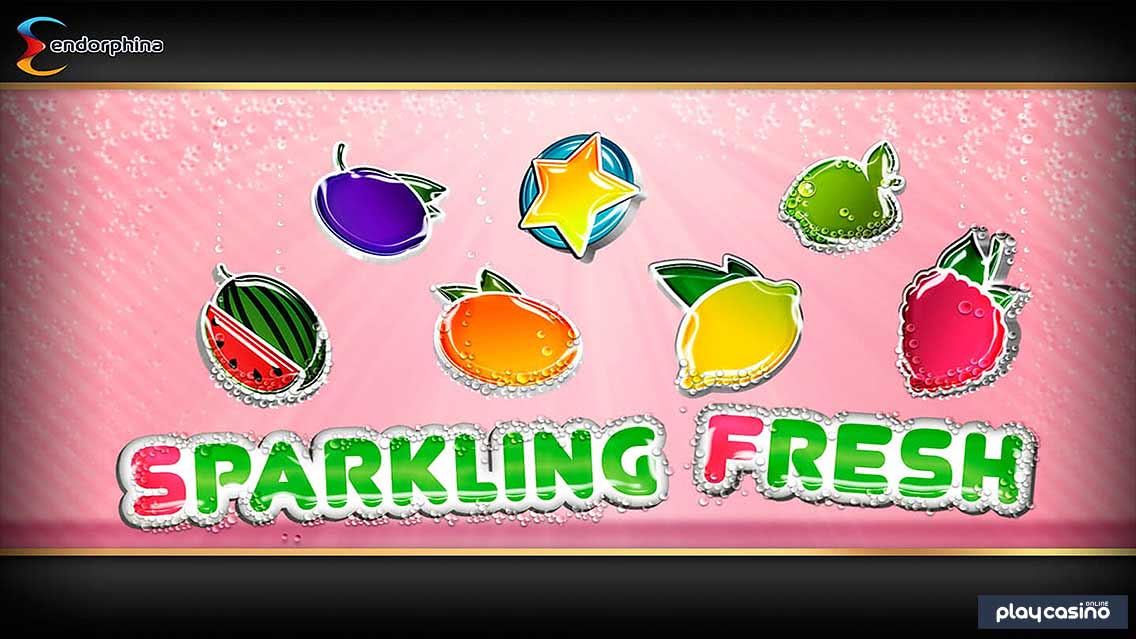 Betting is set up to allow coin sizes that range from $0.01 to $1 apiece. This puts the minimum wager at $0.05 per turn, which is low enough for the smallest stakes penny players out there, and that’s an important point in the continued popularity of the Sparkling Fresh video slot. Players also have the option to bet as many as 10 coins on each of the paylines, and that lends itself to a maximum wager of $50. Clearly, everyone at every stake is welcome to enjoy this game from this wide of a betting range. 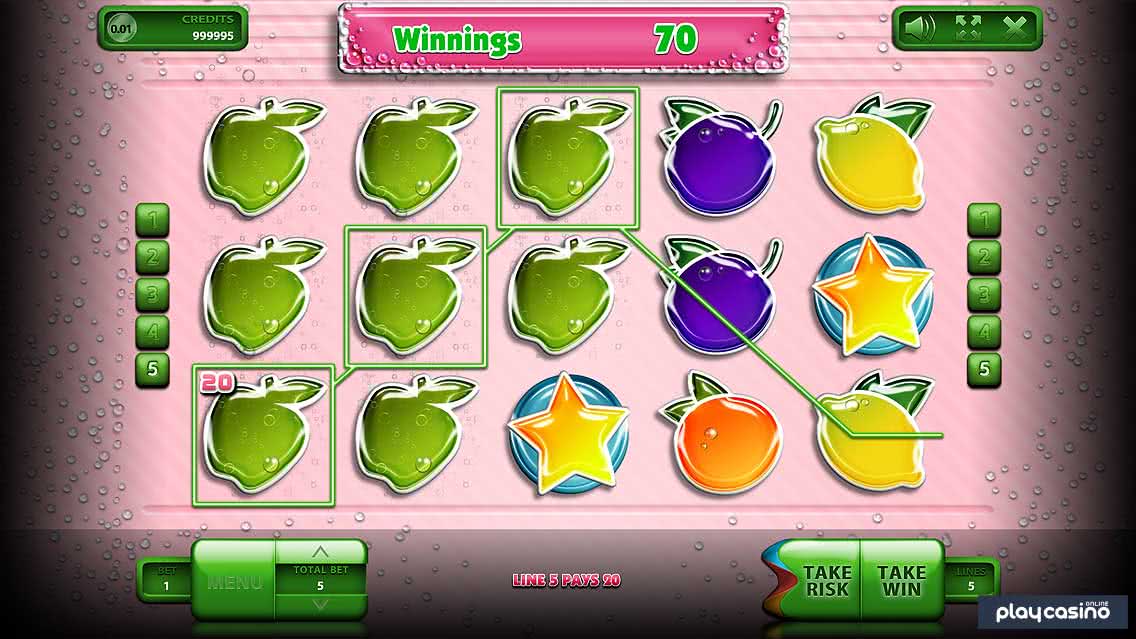 Five of a kind is worth a 250x payout with the scatter. You can also score 50x for four of this symbol or 10x for three of it. These payouts come from having these stars anywhere on the reels at all. They don’t have to line up on a particular payline, and they don’t have to be on the reels from left to right. 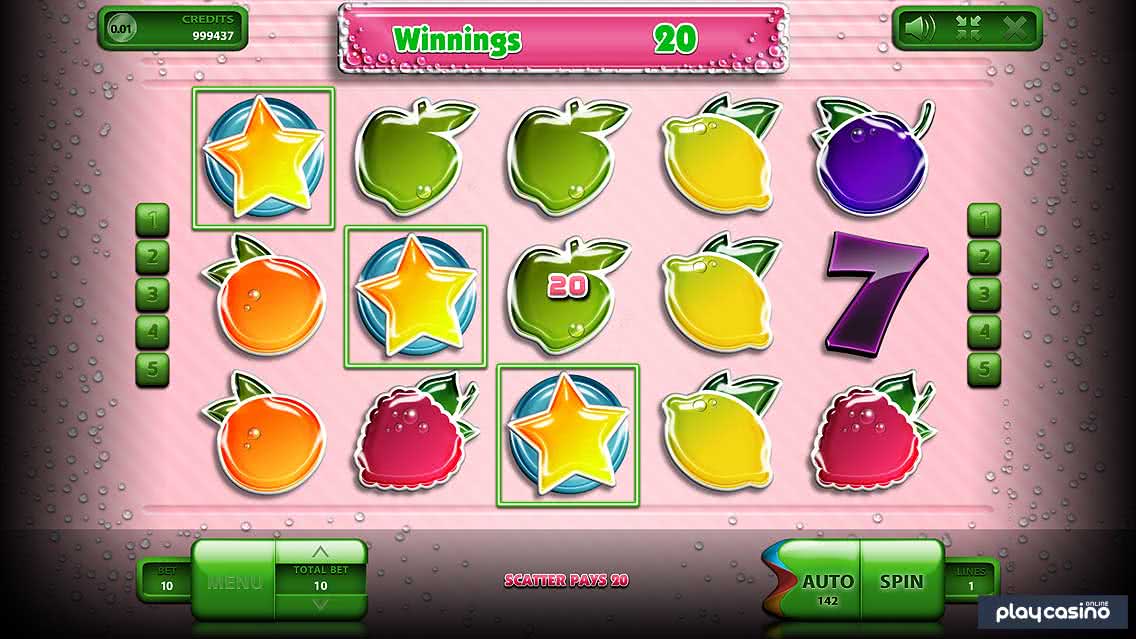 In traditional, classic slots, a main symbol is often the lucky red seven. In this case, it’s been updated in a darker, modern look with a dark purple surrounded by a somewhat lighter purple outline, giving it a somewhat neon appearance. The largest payouts in the game come from this seven.

The big jackpot for the game is won when you get five of the purple seven on an activated payline. This symbol pays 5,000x in this case. The second-largest win is for four of the purple seven, and you’ll score 1,000x when you get that payout. Still, three of a kind of the lucky seven is worth 100x, which is not bad at all for a three-of-a-kind combination.

Something really important to note about the Sparkling Fresh video slot is that it has a pay table that’s balanced in its own sort of way. There are some large pays with the lucky seven, as you have seen above, but the rest of the symbols offer overwhelmingly medium-sized wins. Put another way, there aren’t actually many small wins in the game at all, and that affects the volatility in an interesting way that you’ll have a hard time finding with other games.

The watermelon and plum symbols are each good examples of this. As the two chief mid-range symbols in this game, they both pay 500x for five of a kind. You’ll be able to earn a 200x prize for four of a kind of either as well, and the win for a three-of-a-kind combination of either of these is 50x. These are not small wins, and they’re up there with the largest pays that you’ll find in many other slots. 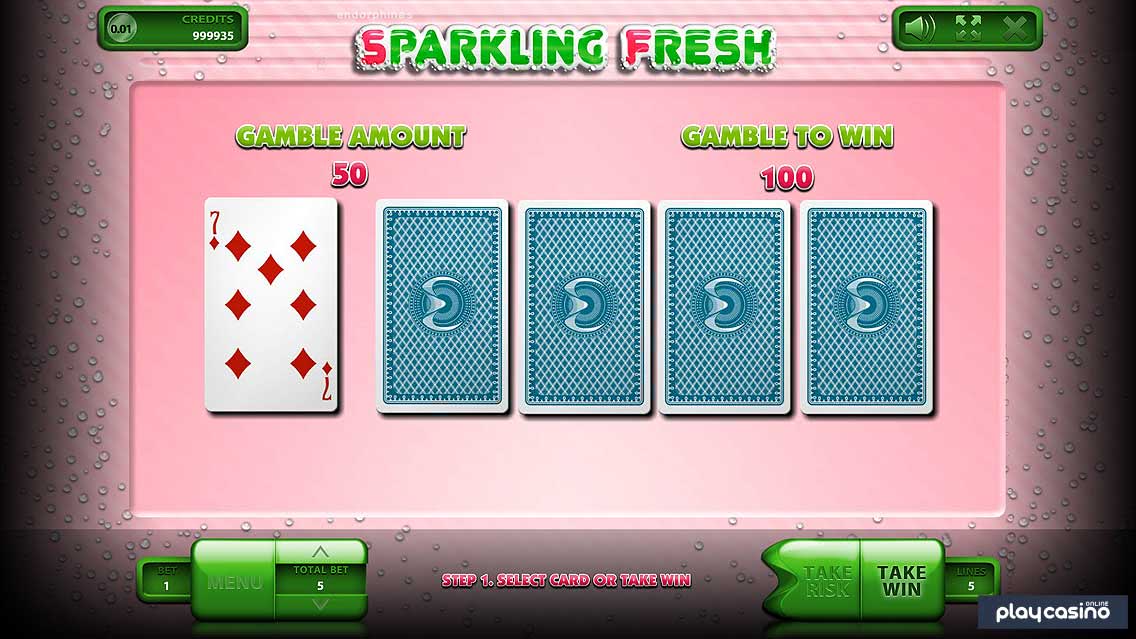 Four symbols make up the bottom tier of payouts in this game. As is the case with the mid-range symbols, all four of these are fruit-based. The strawberry, lemon, orange and green apple all make an appearance at this stage of the pay table, and they all have the same payouts with one small exception.

Five of any of these four symbols will earn a 200x win. This is actually pretty high for being the smallest five-of-a-kind payout in the game, and it may actually be the highest in that category that we have ever seen in a lot. If it’s not, then it’s very close. Four of a kind of these symbols earn you 50x, which is again a pretty good payout. Three of a kind earns 20x, which is the same prize we’ve seen for the smallest five-of-a-kind wins in certain other slots.

Of these four symbols, the green apple has one extra payout that the other three do not have. Two of a kind of the green apple will give you a 5x win, which essentially pays you back your money for that particular spin. 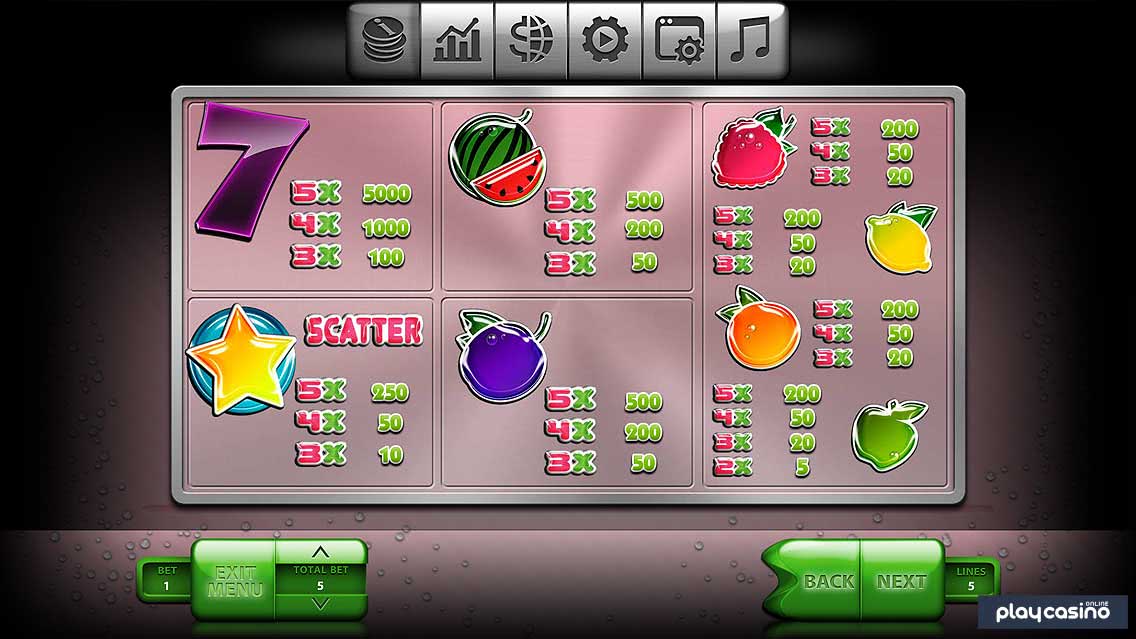 A Note on Play Styles

The Sparkling Fresh online slot is built completely around a particular type of play style. If you’re the type of player who enjoys this play style, then you’ll contribute to the lasting popularity of this game. If you prefer other types of play styles, then you’ll probably do best to check out other games by Endorphina so that you can find something that works better towards your own personal predisposition.

Sparkling Fresh by Endorphina is a game that has a different style of play than most video slots these days, and that makes it a perfect fit as a part of their portfolio as a whole. It caters to a particular audience in a great way, and these players tend to prefer value from the pay table and good wins for all symbol combinations over bonus features and a lot of flash, particularly if those features don’t come very often.

If you’re a fan of this type of game, then the Sparkling Fresh slot is a great choice because it’s easily one of the best in the industry at creating this type of gameplay experience. It’s even able to do so with a large top jackpot, a reasonably large secondary jackpot and a medium volatility, which is impressive in and of itself as well.