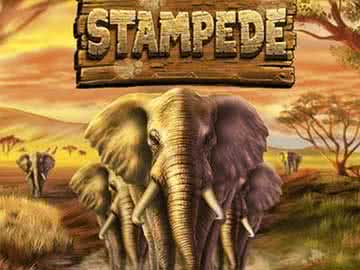 The Stampede online slot by BetSoft gives players a chance to go on a beautiful African safari trip right from the reels. This is a 1,024 ways style game with five reels and four rows, and it’s geared towards big action with free spins and wild multipliers that combine for huge payoffs.

If you’re the type of player who is a fan of animals, then the Stampede video slot by BetSoft is going to be a title that you’ll definitely want to check out. It centers completely around an African safari, and you’ll see tons of animals with great graphics and presentation as a result. The style of the game itself is designed for a lot of action, and its medium volatility comes from a combination of a fairly balanced regular pay table and a bonus feature that can give some extremely high multipliers for your wins. Put that all together, and you have both the peacefulness and the potential excitement that could come along with an afternoon on the African savanna.

Format and Layout of the Stampede Slot

When you first look at this game, what you’re going to notice is that it’s larger than many other titles because it uses five reels with four rows instead of just three. Part of the reason for this is to open things up and give you more ways to win since this title also uses the all-ways format. This gives you a total of 1,024 possible ways to win on each spin that you take, and that’s obviously the source of a lot of the fast-paced action that can come along in this game. 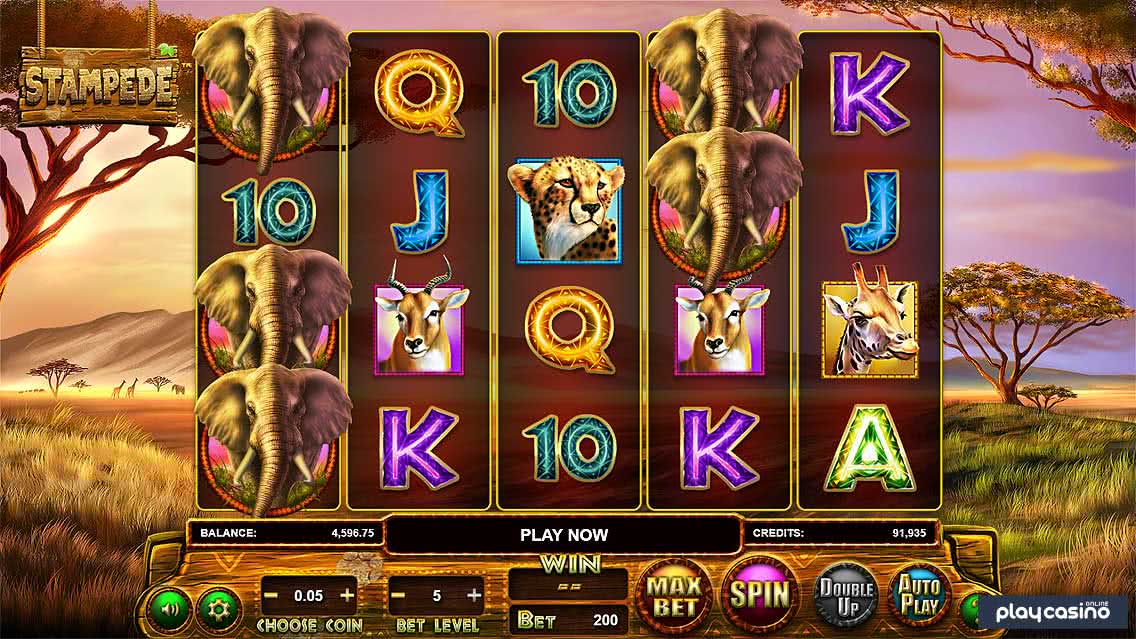 To make the betting work out with even numbers, you’ll only wager 40 coins per spin. However, you can multiply that by up to five for a total of as many as 200 coins wagered per spin. Likewise, the coins themselves can also be changed to be worth $0.01 to $1 each. With these controls, the minimum bet size per turn is $0.40, and you can also bet up to $200 per spin as well. This is a good range that’s inclusive and gives high rollers, penny players and everyone in between some solid options. 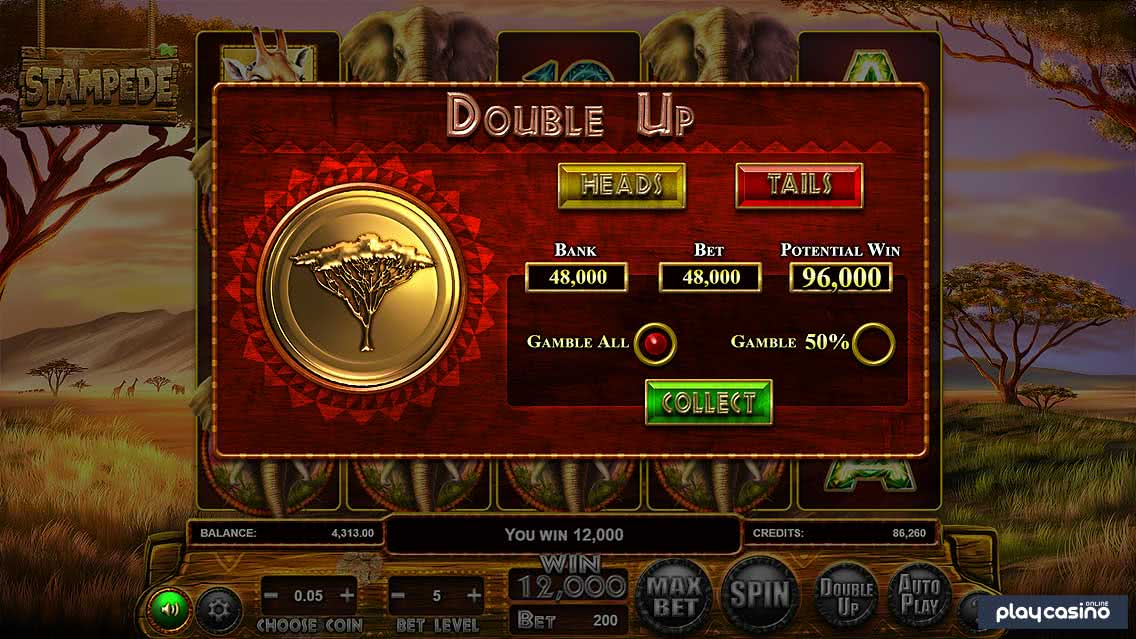 Many BetSoft titles have wild symbols that do not get their own payouts, and that’s the case with this game as well. In the Stampede online slot, you’ll have tree symbols that appear red with a sunset behind them that are scattered, and they’re the only symbols that aren’t substituted for by the wild. While the wilds don’t get their own pays, they do help to get other wins, which is especially valuable with the all-ways format. On top of that, they’re a key part of the free spins bonus feature, which we’ll note below.

Five of a kind of the scattered tree is worth a super solid 800x payout. You can win 400x for four of this symbol anywhere on the game board, and just three still gets you a 80x payout. 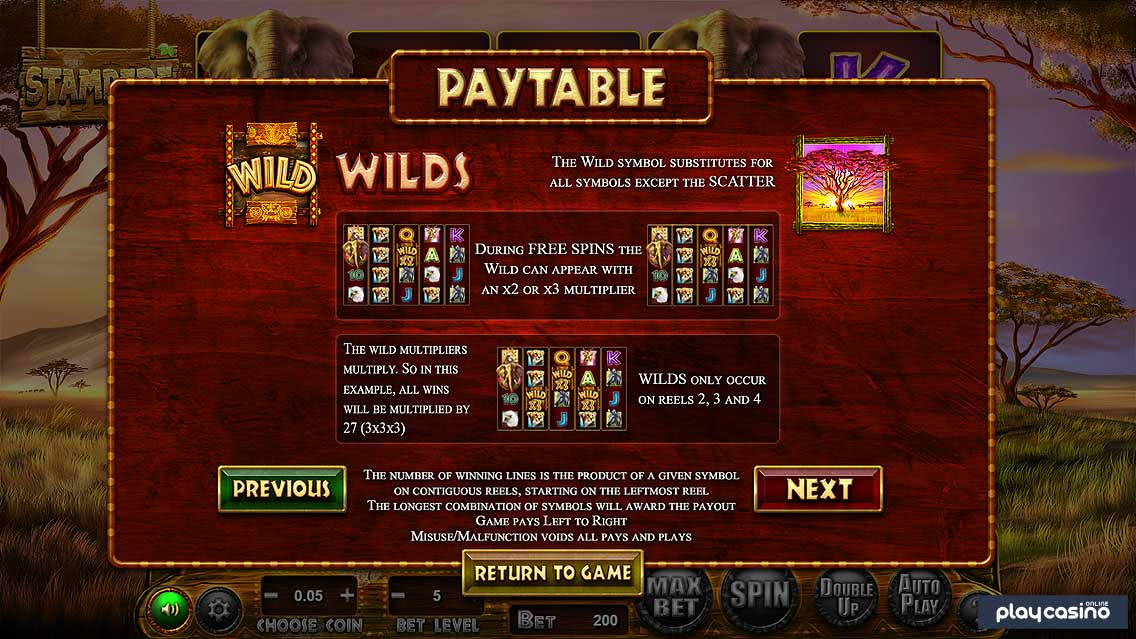 To trigger this feature, you need to get at least three of the tree symbol, but it can be located anywhere on the reels to trigger the feature, and it doesn’t have to be from left to right or anything like that. Three of these will get you eight free spins, but you can make it 12 if you manage to pick up four. Finally, five of the tree is worth 20 free spins.

During these free spins, the wilds give you multipliers of 2x or 3x. What’s more is that they can combine, so if you get a 2x and a 3x wild multiplier as a part of the same combination, then that multiplies the total prize by a factor of 6x. For another example, three of the 3x wild multipliers would go to gether to give you an incredible 27x multiplier, so it’s easy to see how the multipliers can really give some major payouts pretty quickly if they line up the way you want them to. 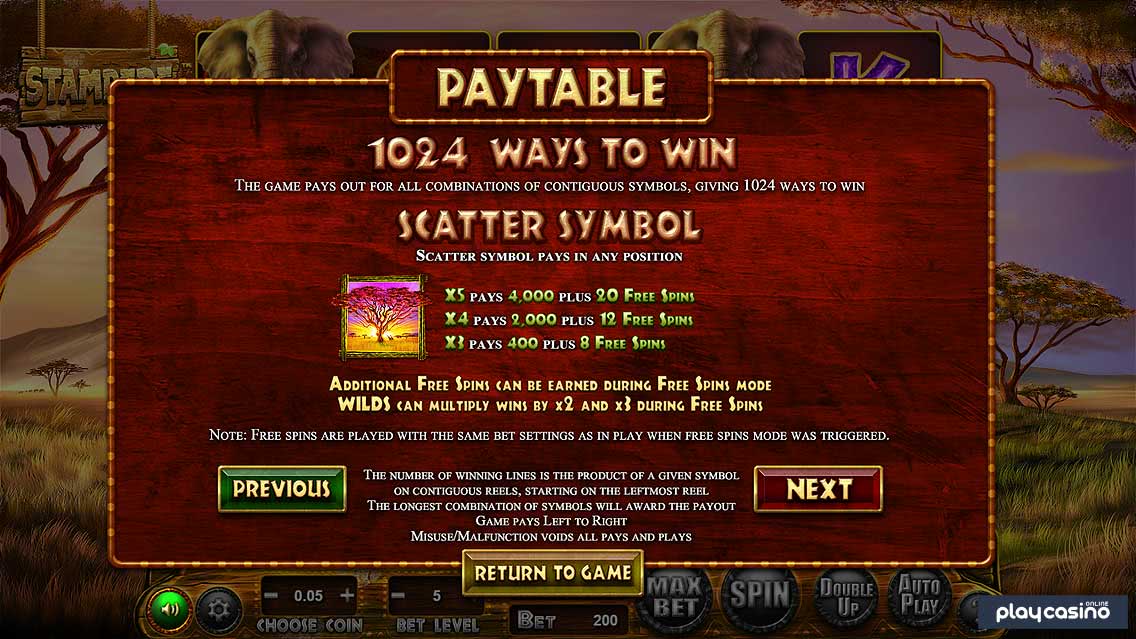 Three animals make up the highest level of regular-paying symbols in this game. The elephant is up first, and it can give you a win for just two of a kind. That helps some of the volatility in this game since it’s an all-ways format, so having an elephant anywhere on the first and second reels gives you a payout of 10x. Three is worth 50x, and four gives you 100x. You can pick up 300x for five of the elephant as well.

The cheetah and the bird symbols each have the same pays. It’s 150x for five of a kind, and a four-of-a-kind combination awards 100x. Your prize for three of either of these animals is 50x.

The animal symbols continue with the zebra, and it gives you 120x for five. This is the same prize as the giraffe, which is worth 120x when you line up five as well. It drops down a little to the gazelle, and this guy will give you 100x for five. 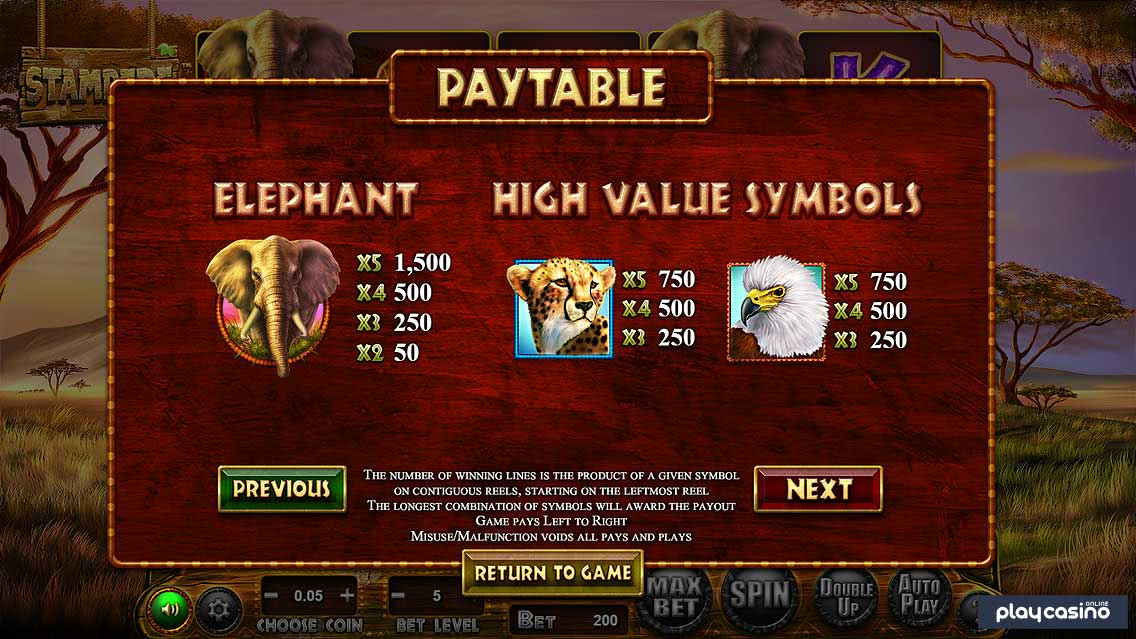 The card rank symbols are stylized in an Africa-themed font with some bright and vibrant colors. We don’t typically prefer for games like the Stampede video slot to use card ranks since we think it can be lazy, but it comes across pretty well here.

The A symbol starts things off, and it’s in a bright yellow that’s almost gold. Five of a kind is worth 100x for this symbol, but the four-of-a-kind win is 50x. This is important as you’ll see below. Three of any of the card rank symbols will get you 5x.

For the purple K, orange Q and blue J symbols, the five of a kind payout is also 100x. However, the four-of-a-kind combination only gets you 20x. Keep this in mind if you’re the type of player who likes to remember the pay table because it can be confusing if you forget.

Finally, you have the green 10. Five gets 100x, and four drops way down to 10x. Three of a kind gets you 5x like the other card rank symbols, but it’s the only one to give you a payout for two of a kind at 2x. 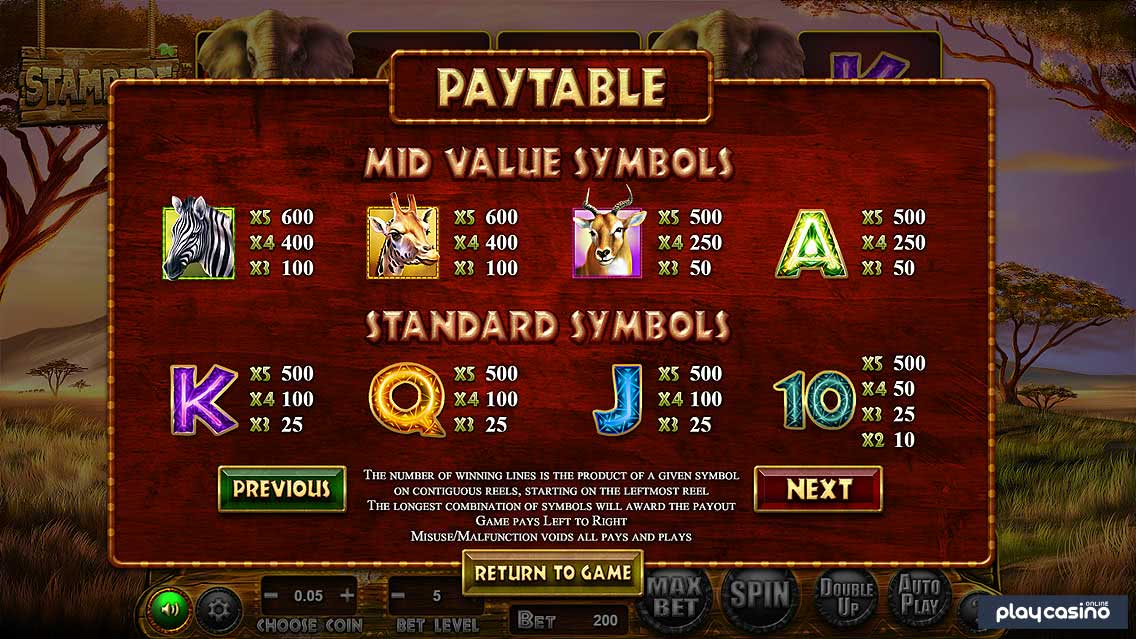 The popularity of the Stampede online slot comes down to the fact that animal-themed games tend to do better, on average, than many other themes. For whatever reason, players just really love having animals all over their screens, especially from exotic places, and that’s the kind of thing that BetSoft has taken advantage of in this title.

However, they didn’t just rest on the smart choice of theme or great graphics. Instead, they really went for the kill with some strong gameplay both in and out of the free spins feature, and they gave players some pretty exciting chances for really big payouts with stacking wild multipliers in the free spins mode.