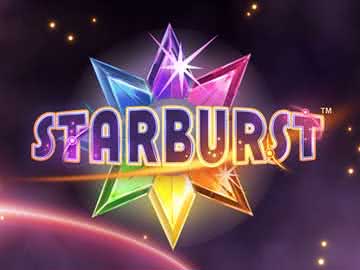 Starburst is a gem-based online slot produced by Net Entertainment that has 10 paylines and a lot of action for players in a relaxing atmosphere.

The theme of Starburst is essentially a mix of a few different things. You’ll see a little bit of a classic slot influence with certain symbols, but you’ll also see excellent graphics with gems on a gorgeous outer space background. This title has been developed around the premise of giving players a relaxing experience, and Net Entertainment has done a great job with that in every aspect of the gameplay. If you like low-volatility titles that are based around hitting a lot of small and medium wins for smooth gameplay with few swings, then this is a game that you will probably be able to get behind.

There are five transparent reels with three rows of symbols in Starburst, and although there are 10 paylines, they pay the highest-paying win in both directions. That means if you have a left-to-right win and a right-to-left win on the same payline, even if it’s for five of a kind, then you get paid that prize in both directions. Obviously that adds a bit of value and lowers the volatility of this game, and that fits into the overall theme.

Bet sizing has been made really easy, however, and everything is based on wagering between one and ten coins on each of the 10 paylines. With coin values that go from $0.01 to $1, and with the fact that you can bet between 10 and 100 coins on each spin, the wagers you have available in this slot start at the $0.10 level and run all the way up to $100. You can enjoy this like a penny slot or go for high stakes wins, and it’s all up to you on how you want to play.

Wild Symbols and the Re-spins Feature

There is a single bonus feature that the vast majority of the gameplay of Starburst is based around. Net Entertainment has structured this game so that everything revolves around this one feature to give it continuity with the relaxation-based experience they’ve tried to create in this slot. The basis of the feature is that wild symbols, a star with different colors in it, show up on the second, third and fourth reels. Whenever one appears, it expands to cover the entire reel, which gives you a lot of value since it affects both the left-to-right and the right-to-left ways to win.

However, that’s where the feature truly begins. Whenever you get one of these wilds, you get a free re-spin with the wilds held in place. What’s more is that you can get more re-spins if you pick up another wild, and they will all be held in place. Likewise, you can get a total of up to three re-spins by picking up all three wilds, but if you do that, your chances for hitting five of a kind wins becomes tremendous. Seeing that these wins are paid both ways, it’s clear to see the potential for some really serious payouts using this expanding wild re-spin feature.

Aside from the wild symbol, which does not get its own payouts since it only appears on the middle three reels, the top two symbols are obviously classic slot-inspired. The BAR symbol will pay you 250x for five of kind, but it’s also noteworthy because it pays 200x for four of a kind. These are the two largest wins available in the game overall. You can also pick up 120x for five of the lucky red seven symbol. Both of these symbols have been stylized in a way that works well with the outer space motif that you get from the background of this slot.

Five gem symbols make up the rest of the pays. The yellow diamond pays 60x for five of a kind, and the green emerald gives you 50x for the same. You can pick up a 40x win for five of the orange gem, and the same 25x payout is available whenever you get five of a kind in the blue or purple gem symbol.

Volatility and the Gameplay Experience

Starburst by Net Entertainment fits a certain type of play style that has become its own genre in the video slot world. The idea is to give players an experience that is really easy to enjoy by focusing on a lot of small and medium wins instead of shooting for a single large jackpot or bonus feature that will rarely happen. Since you’ll get the feature in Starburst every single time you hit a wild symbol, that’s obviously not a concern here.

The overall idea with games like Starburst is to help players to have a great experience based on relaxing and simply enjoying the game. Solid visuals and a smooth soundtrack go a long way towards achieving this, and it’s the kind of thing that Net Entertainment has done well in other titles as well. Starburst remains their most popular title in this genre, however, and that’s why you’ll see free spins on this game offered up as part of a welcome bonus package at so many different online casino sites that offer NetEnt titles.