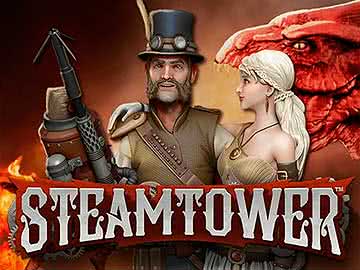 Steam Tower is a video slot by Net Entertainment based on saving a princess in a tower in a steampunk setting with gorgeous graphics.

Steampunk is a genre of science fiction that involves a fantasy scenario where steam was the primary source of power in the world instead of fossil fuels, and the Steam Tower online slot is based in a steampunk setting along those lines. It has a gorgeous treatment of the genre with excellent graphics and a soundtrack to match. Net Entertainment has put this game together in a way that will definitely please fans of the genre and general video slot fans alike. Most of the game is based around a tower-climbing feature, which makes sense given the name of the game, and there are some serious multipliers to be had in the process.

The Format and Layout of Steam Tower

Net Entertainment’s Steam Tower slot is based on a 15-payline video slot format. That means you have five reels, three rows and 15 ways to win across that grid of symbols. The paylines only pay left to right in this slot as well. As is the case with most NetEnt titles, you can bet between one and ten coins on each of those paylines, and the coin values start at the $0.01 level. This gives you a minimum bet size of just $0.15 per turn, which is well without the bounds of any player’s budget, but you can also place wagers that go as high as $150 per spin, so high stakes players can get in on the action with bet sizes that fit their needs as well.

Players will find two different wild symbols in this game. The first is a grappling hook, and it’s the regular wild. In the main game, this will help you to make winning combinations, but it also serves an important purpose in the bonus feature. The other wild is the hero, and he’s the one wielding the grappling hook in the first place. He’s a stacked wild, three symbols high, and he is the key to actually activating the main feature in this game. These symbols work together to give you chances to hit winning combinations, and they can get you value through the free spins feature as well.

The main feature in Steam Tower is based on climbing a tower to try to save a princess. We are obviously going to use this as an opportunity to get paid, and we do this through the use of multipliers at different stages in the tower. Players start on the first floor of the tower with a 2x mulitplier. Every three floors you go up gets you an increase in your multiplier until you eventually hit the 16th floor with a 7x multiplier. You’ll also get a 1,000x payout based on your current be size if you make it to the top as a bonus award.

Whenever you get the stacked wild to fully cover a reel, it will start the free spins bonus feature. Each regular wild you get during the feature give you two extra free spins and kicks you up a floor in the tower. If you make it to the top floor, then you will play out your remaining free spins with a whooping 7x multiplier as you do battle with the dragon and save the princess from being eaten, barbequed or bored to death in the top floor of a steampunk tower with no WiFi.

The wild symbols do not get their own specific payouts in this game, so five of a kind in wilds would really just count as five as the highest-paying regular symbol, which is the eye of the dragon that guards the princess at the top of the tower. This symbol is worth a pretty sizable 2,000x top jackpot. Another notable payout is for five of the hero, and he will get you a 1,000x secondary jackpot payout. The princess is good for 500x when you get five of a kind, and five of the tower symbol itself can also get you a 300x win.

For the lower tier of symbols, you can earn pretty reasonable wins based on the four card rank symbols. Some software providers are really lazy with how they present these symbols, but Net Entertainment has made them in a style that fits the game perfectly and blends in really well without sticking out like a sore thumb (which is, unfortunately, what happens in many other games that use them). Five of the A symbol gets you a payout worth 150x, and that drops to 100x for five of the K. You can pick up 75x or 50x, respectively, when you line up five of a kind of the Q or J symbols as well.

There are a few things that really need to be said about this slot in closing. First off, Steam Tower’s steampunk theme is very much something that has been used very infrequently in the online slot world. We find that interesting considering some slot themes have been used over and over again, particularly things like outer space, Egyptian themes, Asian themes, the Roman Empire, etc. Second, Net Entertainment has captured the feel of steampunk extremely well with how they have crafted the graphics and sound of this slot, which makes it stand out for how well it uses its core theme, something that you unfortunately don’t always see in video slots.

Basing the game around the tower-climbing and princess-rescuing motif gives it a bit of a story, and that helps to drive the gameplay as well since it makes sense that you would be rewarded for kidnapping a princess and saving her from a dragon. The emotional investment in the dragon is also piqued by making it the highest-paying jackpot symbol, putting it even over the hero and the princess, which we think is a minor touch that drives the story home. Overall, this is an excellent title that is very representative of what NetEnt is able to do with their own concepts for games.