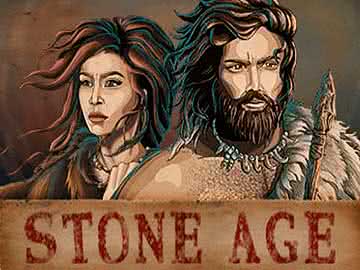 Endorphina’s Stone Age video slot uses a theme based on cave men back in the day of stone-based technology. It’s a 20-payline game with a free spins mode that uses special expanding symbols to make it easier to get multiple pays on the same spin.

Our prehistoric ancestors were limited to a level of technology that is so far behind what we have available now that it’s difficult to fathom. However, Endorphina has captured a great degree of this with the Stone Age online slot. This game shows cave men and cave women in their native environment trying to survive with the tools and concepts they had available. The graphics are in a rough, drawn style that reflects the harsh realities of life at the time, and the gameplay centers around the wheel, largely considered to be the greatest invention from the time period that caused innovation in nearly every aspect of life.

Format and Layout of the Stone Age Slot

The gameplay style start with the format of the game, and here you get a classic approach to the video slot genre with 20 paylines across a five-row, three-reel layout. To adjust the number of paylines that you’re playing with, players can pick a number by clicking or tapping along the left or right sides of the reels. Be warned, however, that playing with fewer than the maximum of 20 will drop the RTP, and that means worse chances of winning during your individual sessions. It’s simply better for you to keep the paylines at 20 every single time you play. 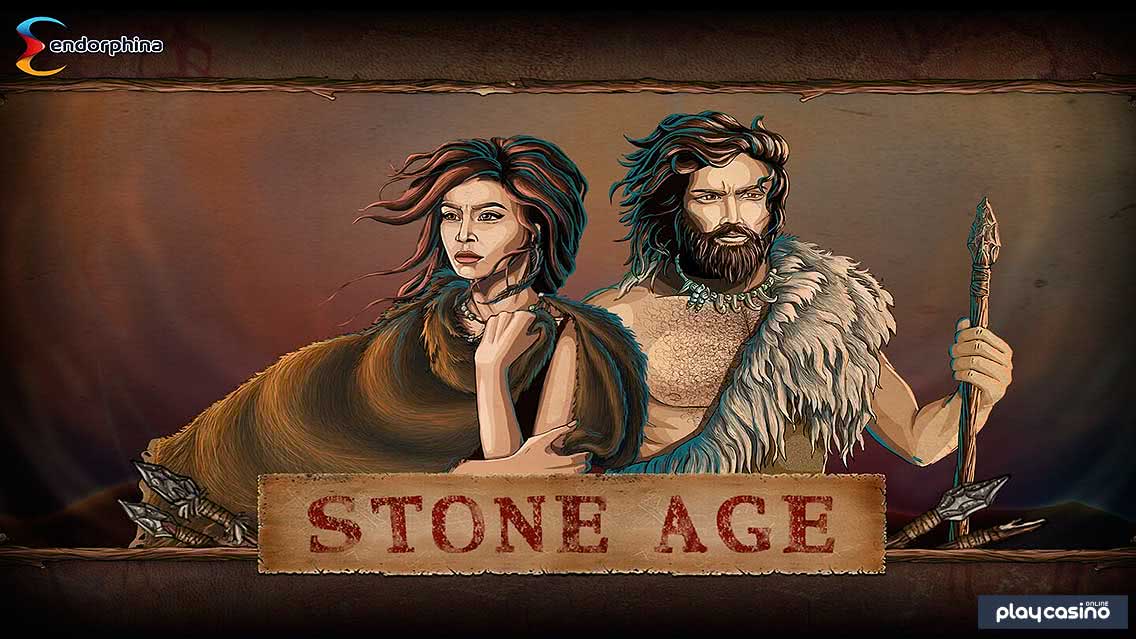 Aside from manipulating the number of available paylines, you have two other ways to change your total bet size. The first is by picking out coin sizes that go from $0.01 to $1 apiece, and that control is on the left-hand side of the top of the reels in the form of a coin that you click to cycle through the available values. The other option allows you to bet between one and 10 coins on those 20 paylines for a betting range of 20 to 200 coins per turn. As a result, you can bet from $0.20 to $200 on each individual spin in this game. 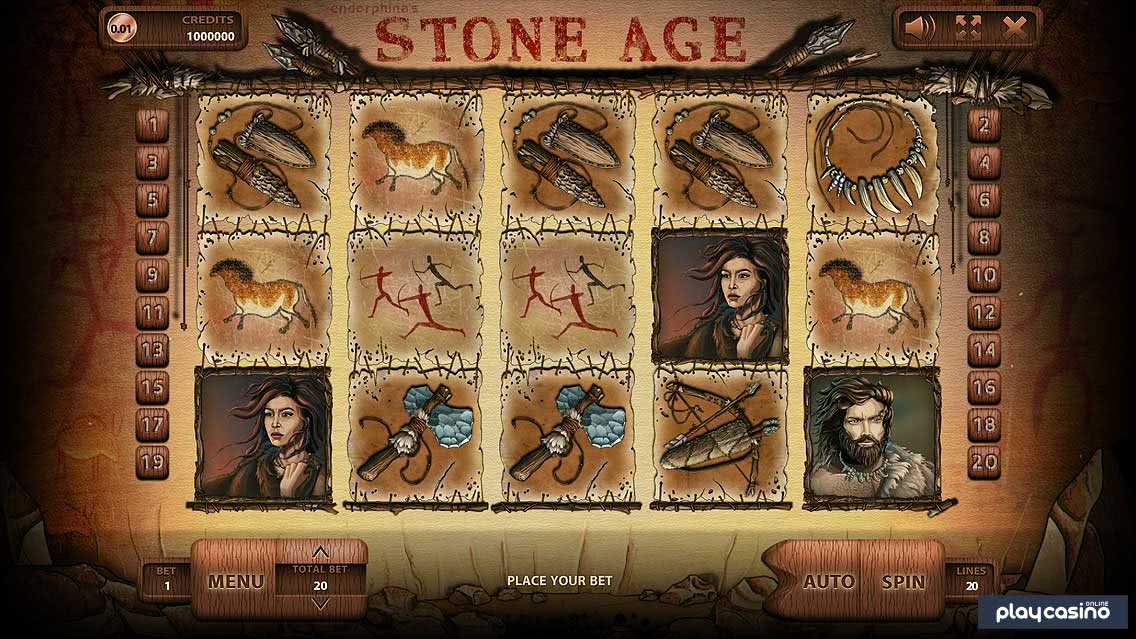 The main symbol that you’ll need to pay attention to the most in the Stone Age video slot is the stone wheel. It’s largely considered to be the first machine ever invented, and it spawned the beginning of what eventually became every aspect of mechanical engineering that we have. Along these lines, it’s not difficult to understand how important it is overall.

In this game, it’s very important as well because it’s a scatter symbol. Five of a kind, regardless of whether they fall on a payline or not, will give you a 4,000x payout, which is the second-largest available win in this entire slot. A 400x payout is yours for four of this scatter, and you can also get 40x for three. These are strong payouts considering the wheel can show up anywhere on the game board to award you these prizes.

Aside from that, this symbol is also a wild. Even though it appears on all reels, it doesn’t get its own prizes for landing on a payline. Instead, it will substitute for whatever will give you the strongest payline-based win on top of scatter payouts. As a result, if you get five of the wild on an activated payline, you’ll win the 5,000x line bet win on top of the 4,000x scatter payout for a total prize of 9,000x, which is on the upper end of what you’ll find in any video slot. 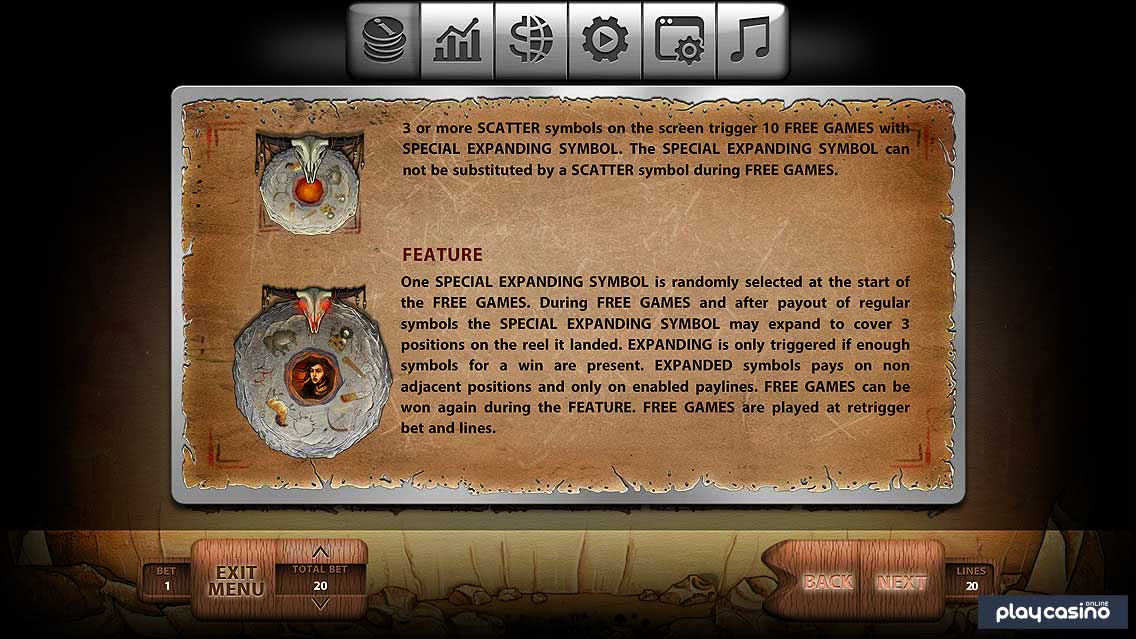 If you score at least three of the scattered wheel symbols on the grid in the Stone Age online slot, you’ll be given a set of free spins. Players start with 10 free turns, and you can re-trigger the feature with three or more wheels to add on an additional 10 free spins. At the beginning of the bonus round, you’ll be given a randomly chosen symbol to expand. After your normal payouts are given, those symbols will expand to give you opportunities to end up with more wins on the board. This is an excellent chance for players to take down lots of multi-line prizes and payouts, and it’s the type of thing that really gets exciting when you get a few of them on the board at the same time because you can literally end up filling the entire 15 symbols of the game board with them. 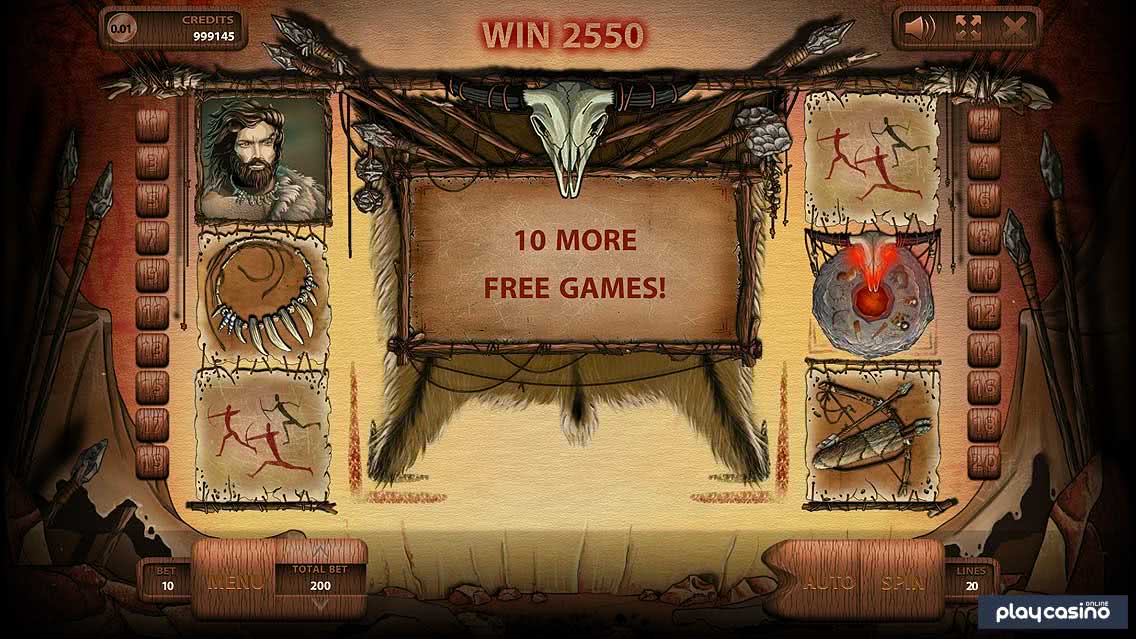 In the Stone Age video slot, you have to pay more attention to the risk game than maybe you would in other titles. After each win, you should choose the option to play the risk game to see which card the house is showing. If it’s a five or lower, it’s in your best interests to play the game since you have an edge against the house. However, if it’s nine or higher, you should opt out and just claim your prize since the house has an advantage against you.

With that having been said, it’s really up to you if you’re facing a six, seven or eight. The reason for this is that all three have an even money payout rate, so you have a house advantage of exactly zero percent when playing against those cards. A failure to play this risk game feature with this optimal strategy we have laid out will result in an RTP penalty. 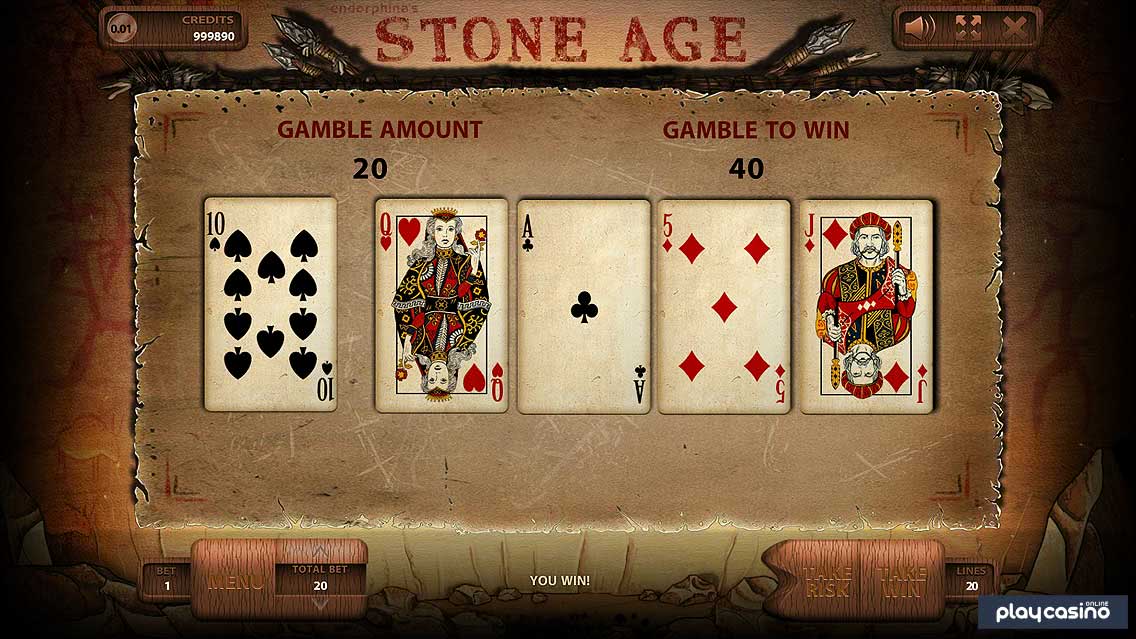 To get the highest payout available in this game, you’ll need to line up five of the mammoth symbol on a payline for a 5,000x top jackpot. Five of a kind of the cave man will also get you a pretty strong win worth 2,000x. Things drop off a bit when it comes to the cave woman symbol and the stone axe as each of the two give prizes of 750x for five of a kind combinations. All four of these symbols wll pay for combinations of two of a kind or more.

The rest of the symbols in this slot require at least three of a kind. This includes the bow and arrow, the knife in a sheath, the bone necklace, the animal drawing and the drawing of the people on the cave wall. The first two of these symbols give you 150x for five, and it drops slightly to 100x for five of a kind of the final three. 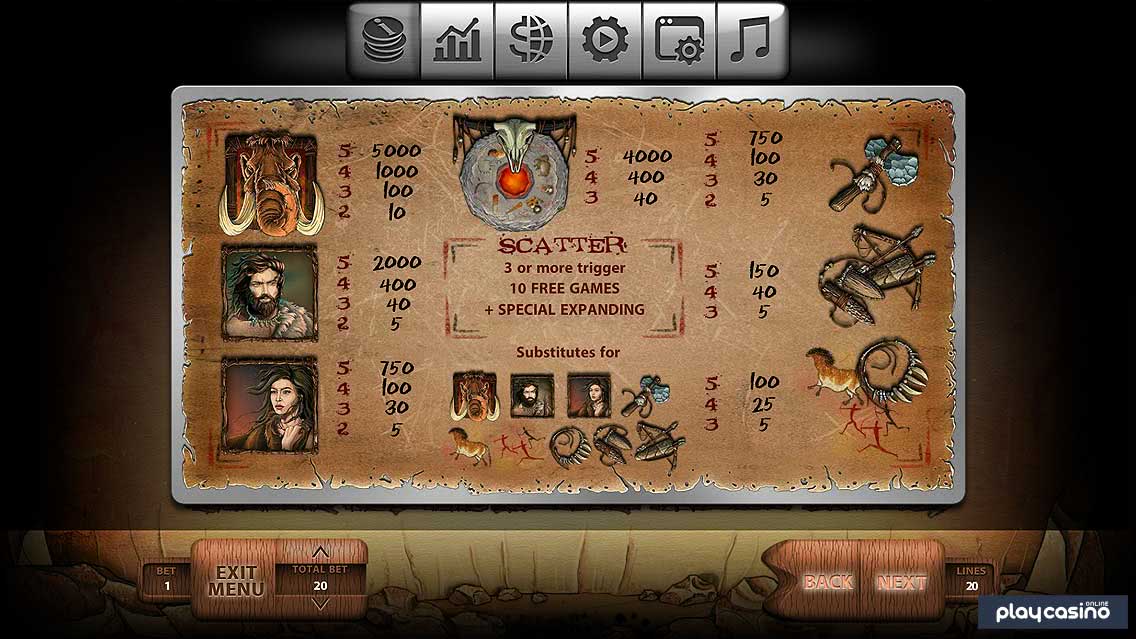 Endorphina has created a fairly immersive game with their Stone Age video slot by combining elements of gameplay and aesthetics to create an overall feel that fits exactly what the game is all about. You’re really trying to “discover the wheel” in this game since it brings you some very serious chances for winnings, and with the tone set by the graphics, it’s a fun experience for players as well. That’s why it has the level of popularity that it does inside of the Endorphina portfolio of titles.