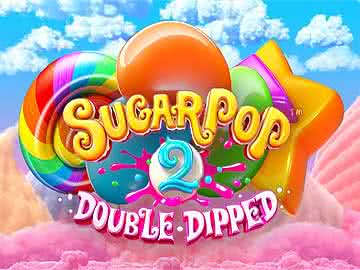 The Sugar Pop 2: Double Dipped online slot by Betsoft features a seven-by-seven layout with cluster-matching gameplay. You can level up to add new symbols and features to the reels, and a fun free spins mode gives you lots of extra ways to get paid.

BetSoft is a company that’s known for giving players a lot of different high-quality titles with a wide range of themes and motifs. The Sugar Pop 2 online slot is an example of how they have taken a candy wonderland concept and turned it into a popular series of games. As the sequel to the original, they really went above and beyond with this particular title, which gives players an action-oriented style of gameplay that’s a bit different than what you’ve probably experienced in most games.

Format and Layout of the Sugar Pop 2 Slot

It only takes a glance at this game to notice that the format is different than the vast majority of video slots. There are seven vertical columns with seven horizontal rows in this square-shaped game area, and that means there are 49 total symbols on the reels at any given time. As such, you will not have the traditional payline approach in this game, and we’ll detail how pays work below instead. 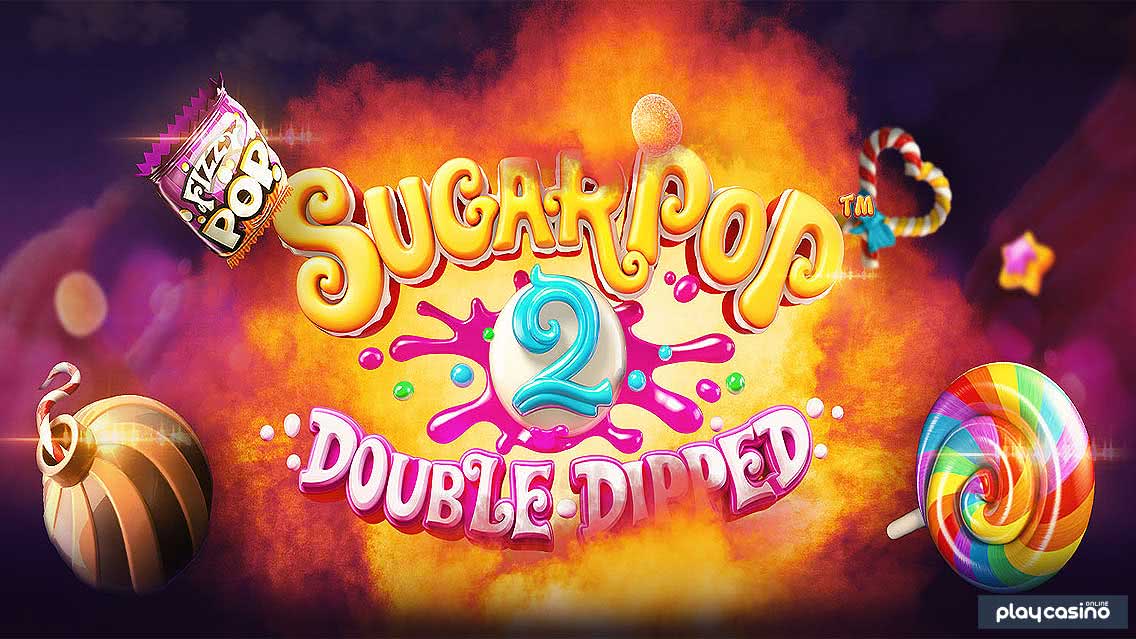 Betting is set up in an atypical way as well, as you might imagine with the lack of paylines. You can pick from actual coin sizes that run from $0.01 to $1 each, and you’ll be betting 50 coins per turn, so the minimum bet size is $0.50 per spin. With that having been said, you can also multiply your total coin wager by up to 5x, and that puts the max bet at 250 coins. Along these lines, the total wager available at the upper end is $250 per spin, so both high rollers and penny players will have bet sizes available that are comfortable. 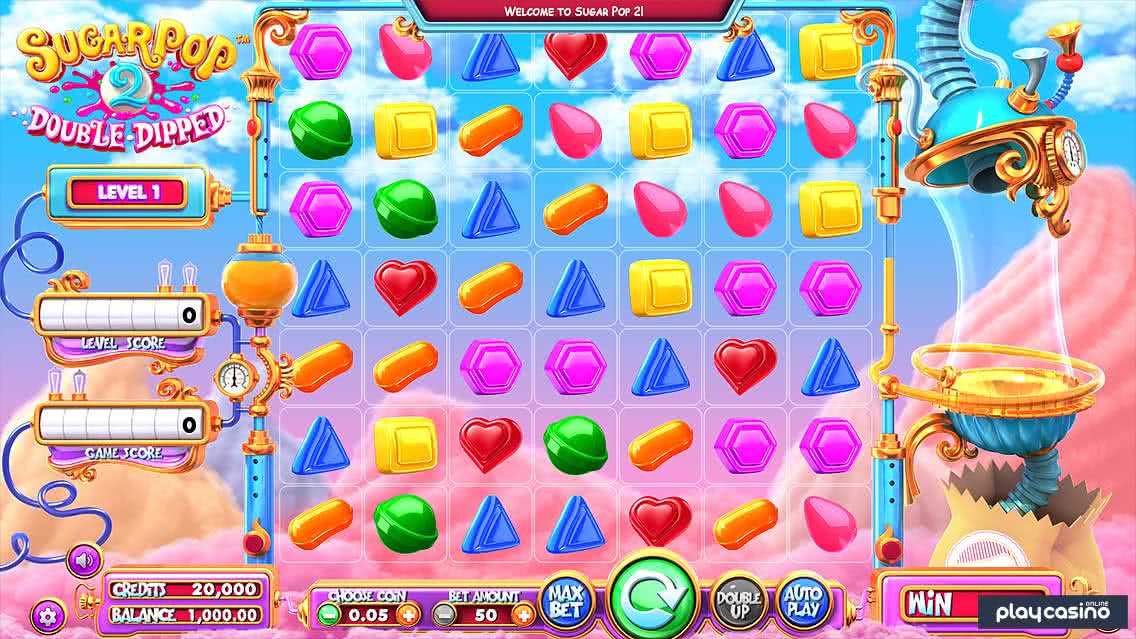 To get payouts in this game, you will not necessarily be getting matching symbols on straight lines. Instead, you will create what are called clusters in the Sugar Pop 2 video slot to trigger prizes. A cluster is at least four connected symbols that are the same and that are adjacent to each other up and down or side to side. This means when you have identical symbols that are adjacent to each other horizontally or vertically (not just diagonally), you’ll have a cluster if there are at least four of them. 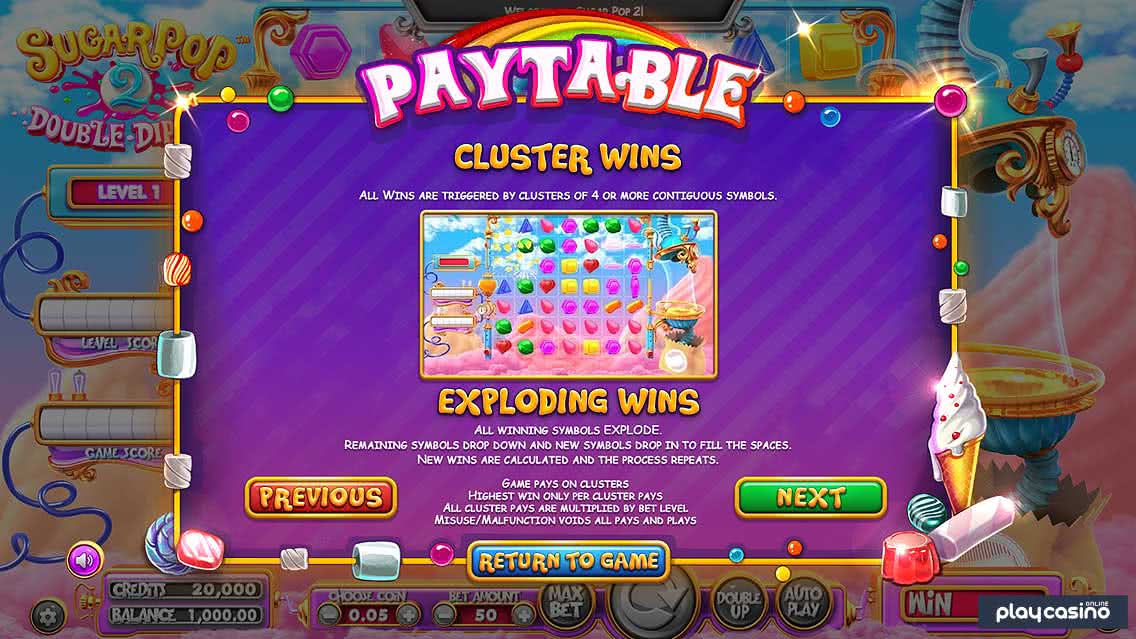 The gameplay in this slot is centered around making things as fast and furious as they can, and even though the game has an excellent visual appeal, they worked hard on the gameplay aspects as well. The Exploding Wins feature is a big part of this focus on the play style, and it works by giving players opportunities to get extra wins in various ways.

The basic idea is that winning clusters explode after they are paid, so you get more symbols falling down into place to give you chances for more wins. If you do get wins after the first set of explosions, then the process continues over and over until you eventually have no more wins to be paid.

Tied in with the Exploding Wins feature is the Candy Bomb. If you get at least five winning clusters, then you’ll get this exploding bomb added to the game board. What it does is that it blows up an area of the board to allow more new symbols to fall into place. It’s held in place until all of your other wins are paid, and it also gives you a cash prize whenever it explodes based on the values of the symbols it removed from the game. 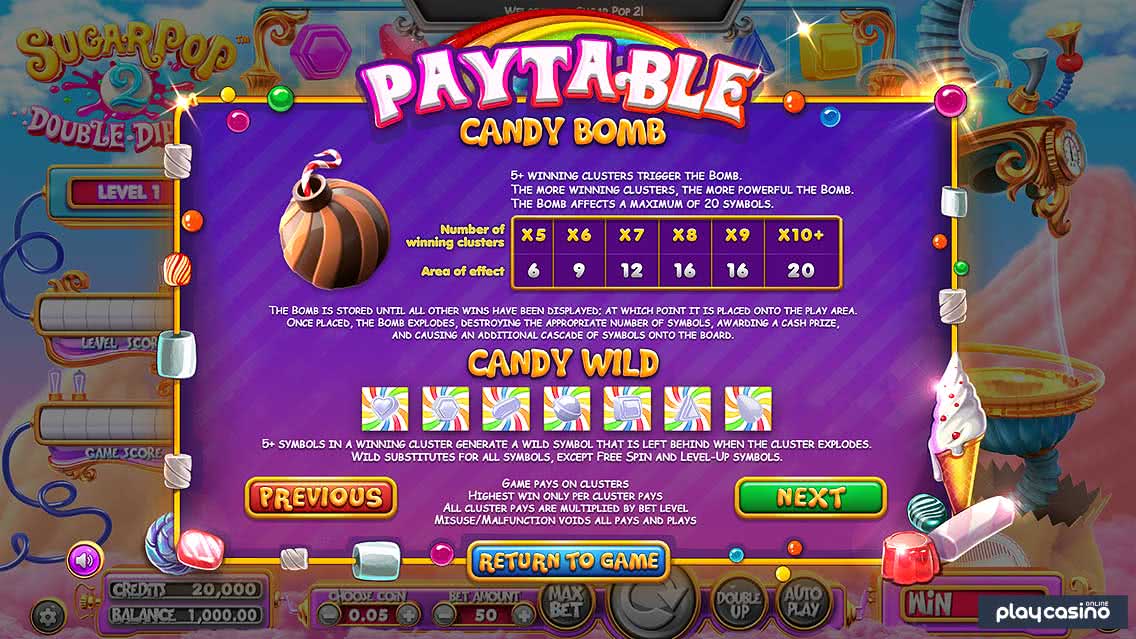 The wild symbol works differently in this game than in most slots. In the Sugar Pop 2 online slot, a winning cluster of at least five symbols will leave behind a wild symbol whenever that cluster explodes. This wild makes it easier to get a winning cluster with the Exploding Wins feature, so you can see how these three features come together in a way that compound your chances of getting several wins on the same spin. 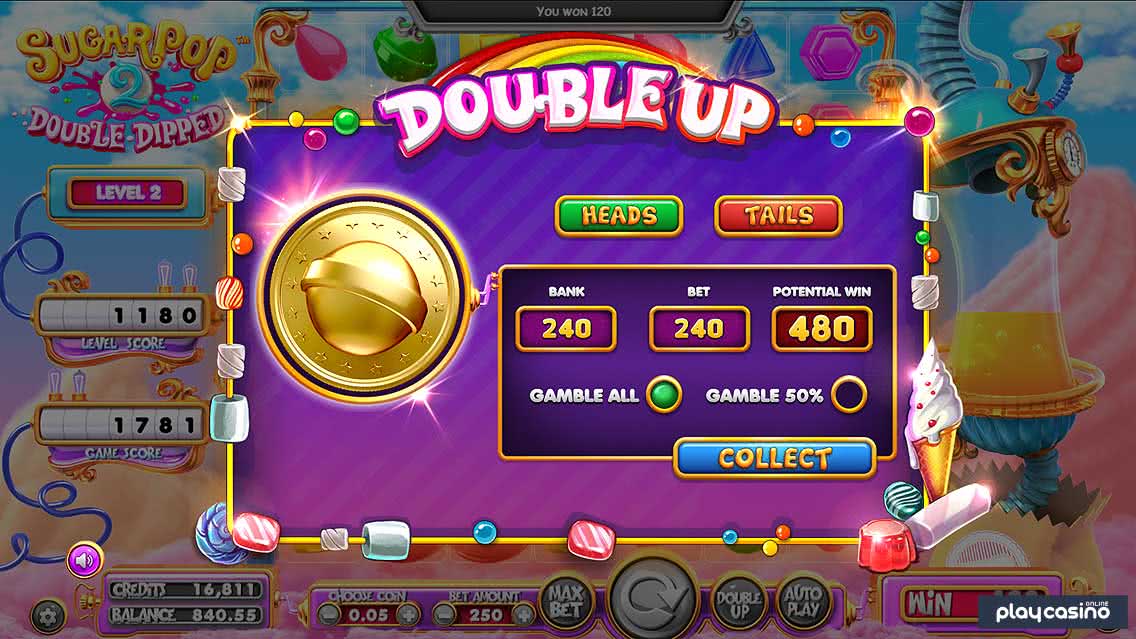 You’ll have opportunities to earn free spins in this game as well. The bonus symbol for this feature says “FS” on it, so it’s pretty hard to miss. A cluster of at least four of a kind will give you a set of free spins, and the number you get depends on how large the cluster is. 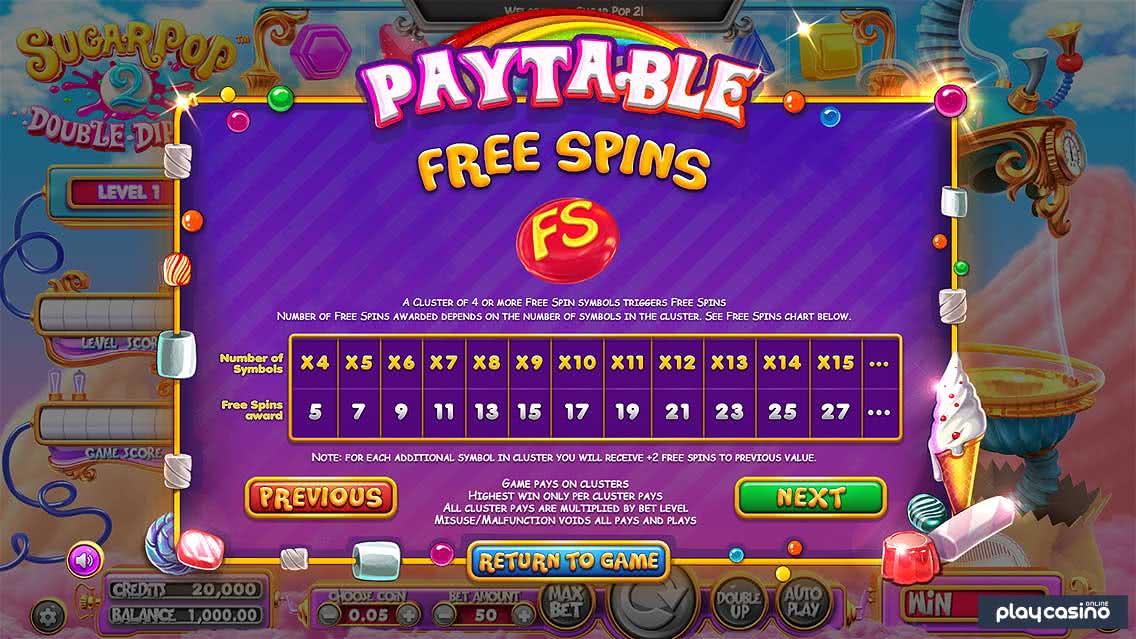 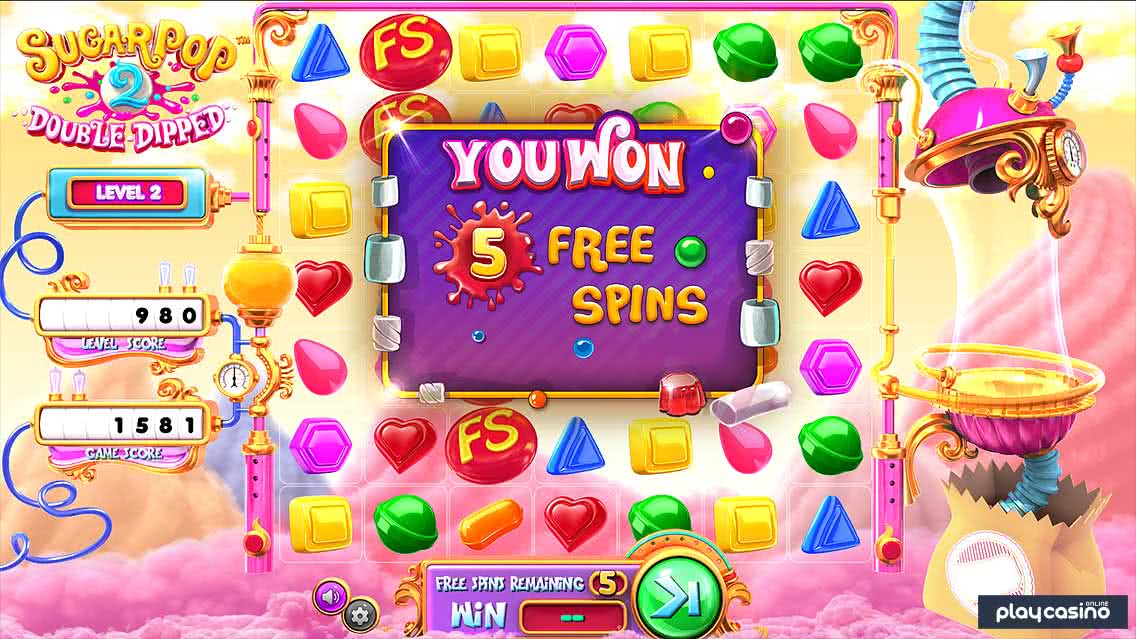 Level Up System and Special Candies

There’s a level up system in the Sugar Pop 2 video slot as well. When you collect arrow symbols, the meter that determines your level increases. Once it maxes itself out, your level is boosted. When you get up to certain levels, you get random opportunities for special candies to hit the game board, and when they appear, they always give you a special feature or payout of some kind.

We want to point out that you do not need clusters of the arrow symbols for them to fuel the meter. Even just one by itself will be collected and added to your total. 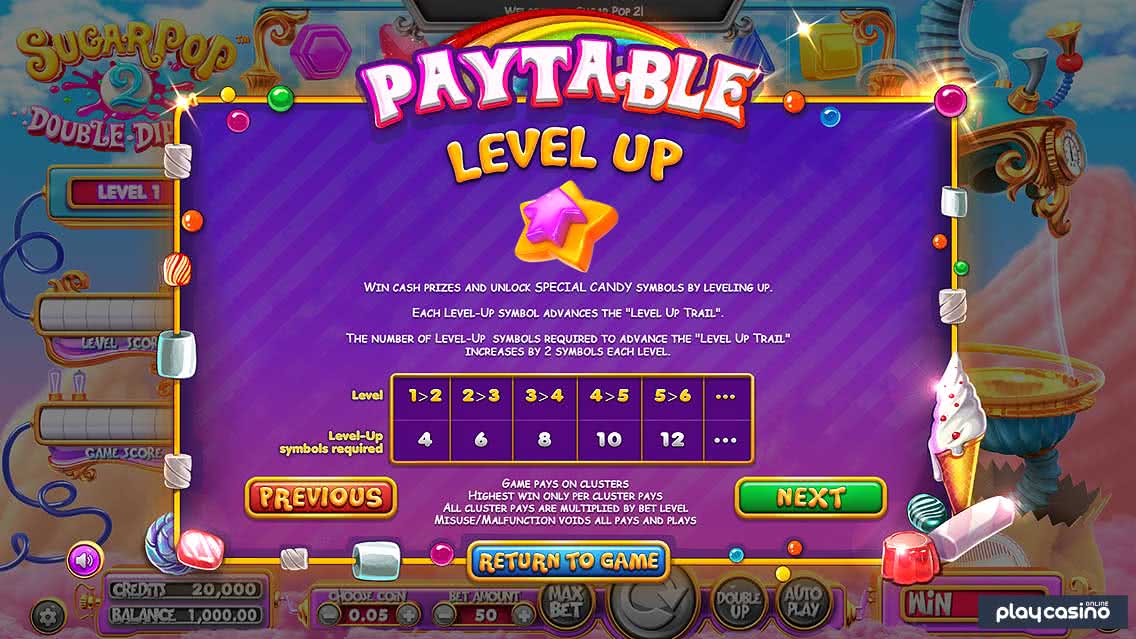 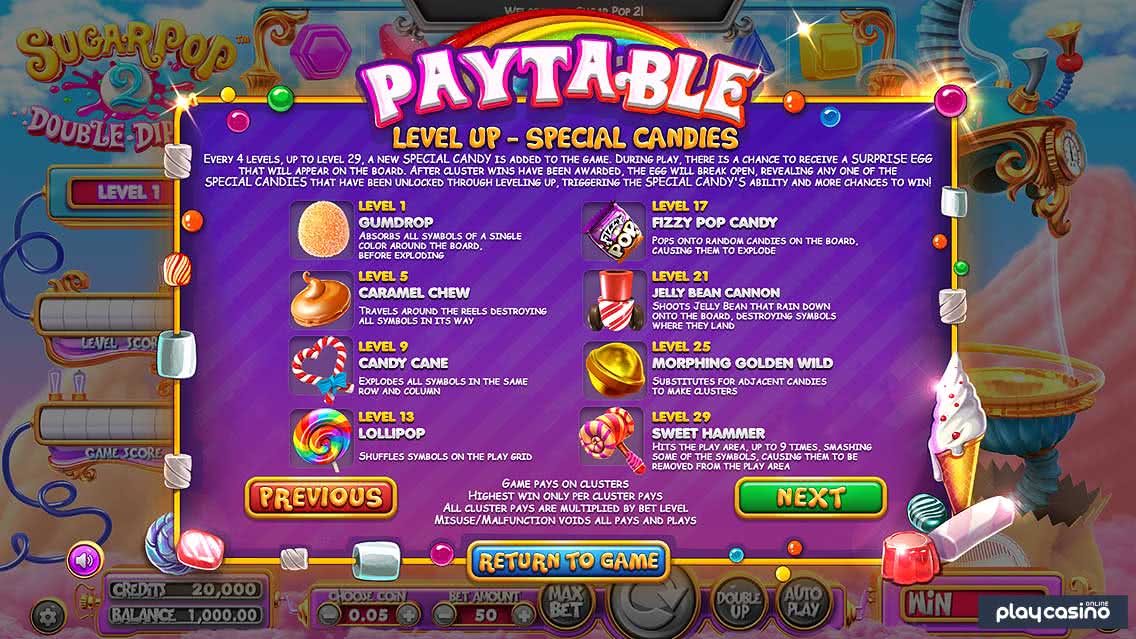 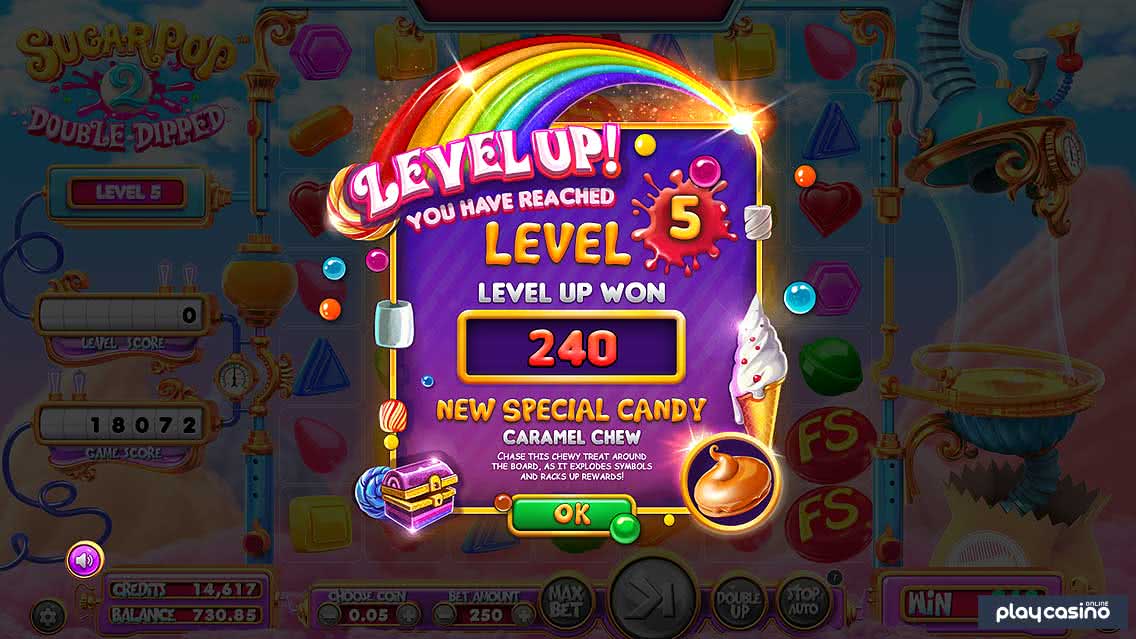 Payouts are determined by multiplying the symbol value listed above with the number of that symbol in a cluster. For example, a cluster of eight of the heart symbol will pay out 8 * 20x for a total win of 160x. 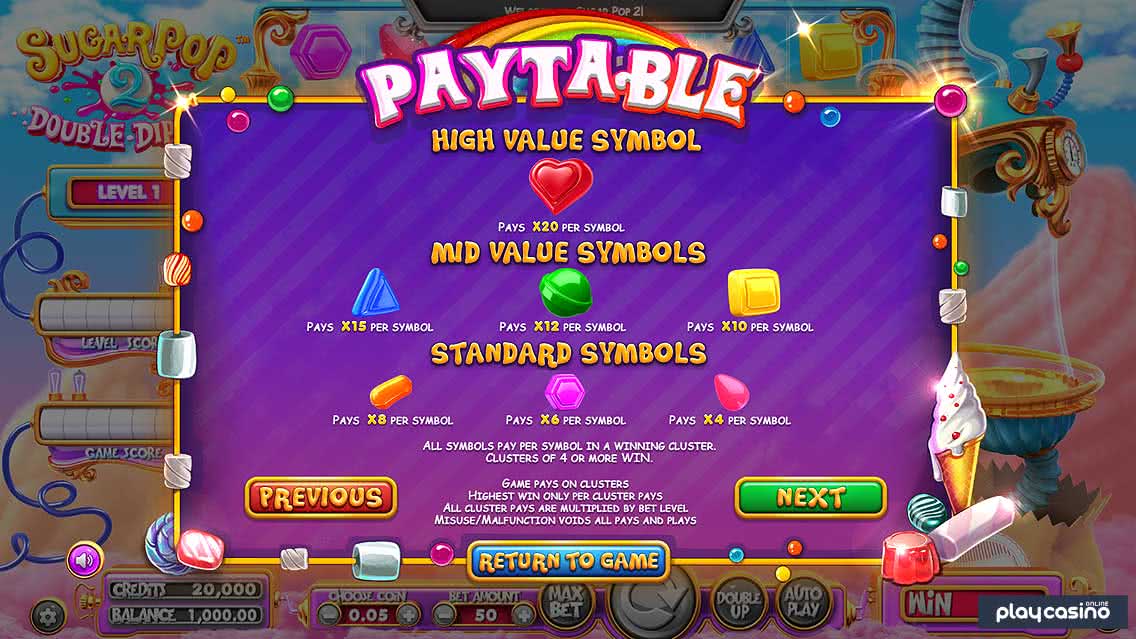 Players who like something a bit different are really going to be drawn to this game, and we think that the vast majority of players out there will enjoy the Sugar Pop 2 online slot in general. The aesthetic appeal is tremendous, and the gameplay is strong as well. It’s difficult to really find much that’s wrong with this game in terms of things that will turn off a sizable percentage of players.

With that having been said, it’s important to realize the the gameplay of this slot is a lot different than what you’re probably used to, and you should be prepared for that when you sit down to play.