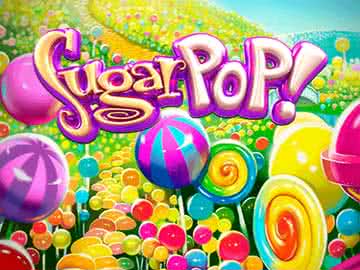 Sugar Pop is a candy-based online slot by BetSoft that uses a five-by-five grid with a symbol-matching style of play. You can level up several times to get new potential features in the form of special candy, and multiple wins can happen with the pop feature and other goodies.

One of BetSoft’s most popular titles from their whole portfolio is the Sugar Pop video slot. It is styled a bit differently than most games and uses a cluster-based approach, but it looks excellent from a visual appeal standpoint. On top of that, it uses its format and them together to give players a tremendous amount of action, which also sets up a whole lot of replay value. While there’s a lot that stands out as being different here, the action is similar to what a lot of other video slots with more typical formats have to offer, and so you aren’t going to feel too far “outside of the box” when you play this game.

Format and Layout of the Sugar Pop Slot

When you get your initial look at this game, you will be able to tell that it’s not going to be the typical video slot affair. While there are five vertical columns and five horizontal rows, the columns aren’t exactly reels. Instead, they allow symbols to fall down into place from up above. Paylines don’t happen in this game either. Instead, you’ll be able to line up clusters of matching symbols horizontally, vertically or both, and you’ll need at least three symbols in a cluster to get a payout. 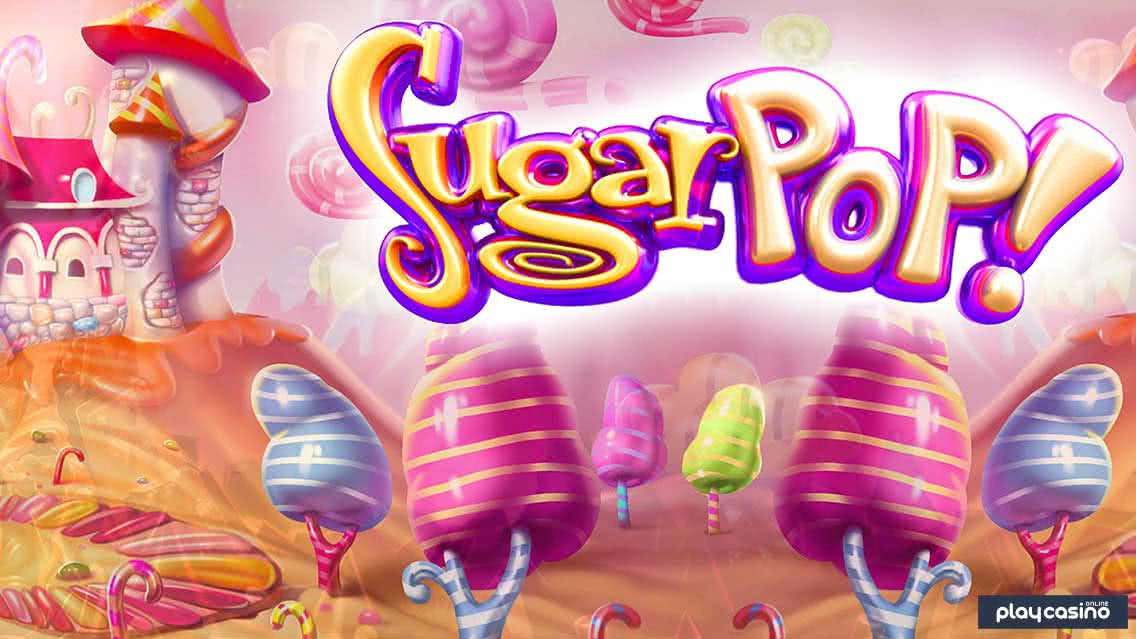 Betting centers itself around 50 coins per spin. You can wager with coins that go from $0.01 to $1, making the minimum bet size $0.50 per turn. That might be a little high for some players, but with the low volatility, the swings won’t be nearly as bad as you might think. Players can wager up to 250 coins per turn in increments of 50, and with the maximum coin size being $1 apiece, you can wager as much as $250 per turn in this game. 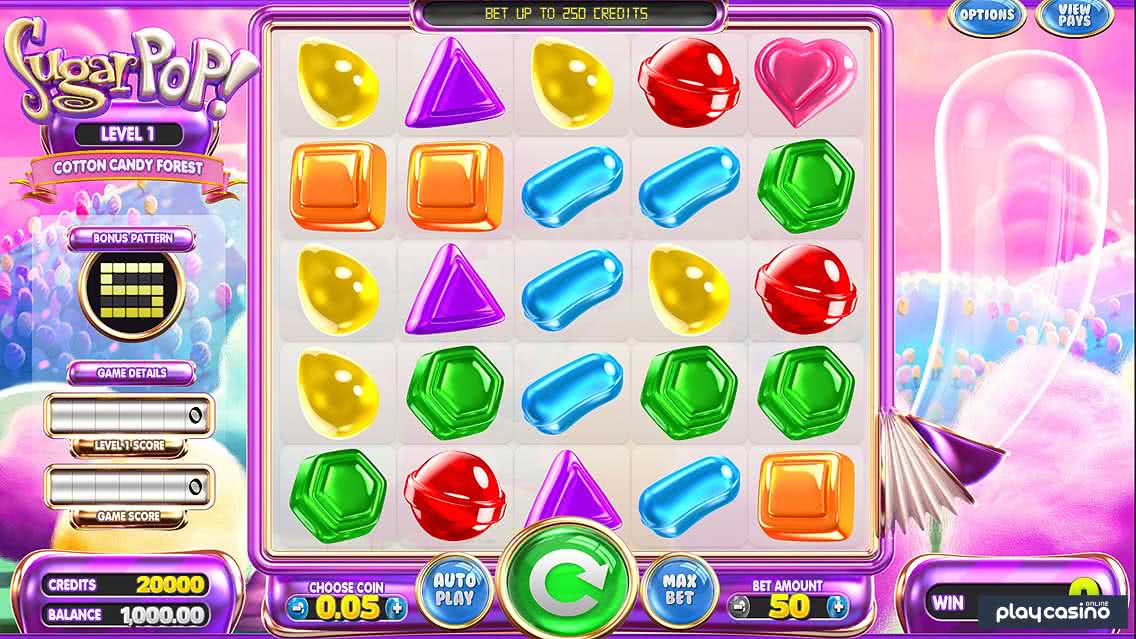 The Sugar Pop online slot has an avalanche-style feature called the pop feature in this game, and it’s one of the main keys to the hit-rate being so high. The way this works is that all winning combinations are paid out before exploding in a big, candy-fueled popping motion. This makes space for extra symbols to fall down into place, which in turn gives you new opportunities to get paid. What’s really cool is that this can happen over and over again to give you several chances to win with a number of combinations on any given spin. The winnings can rack up very quickly with this feature as a result. 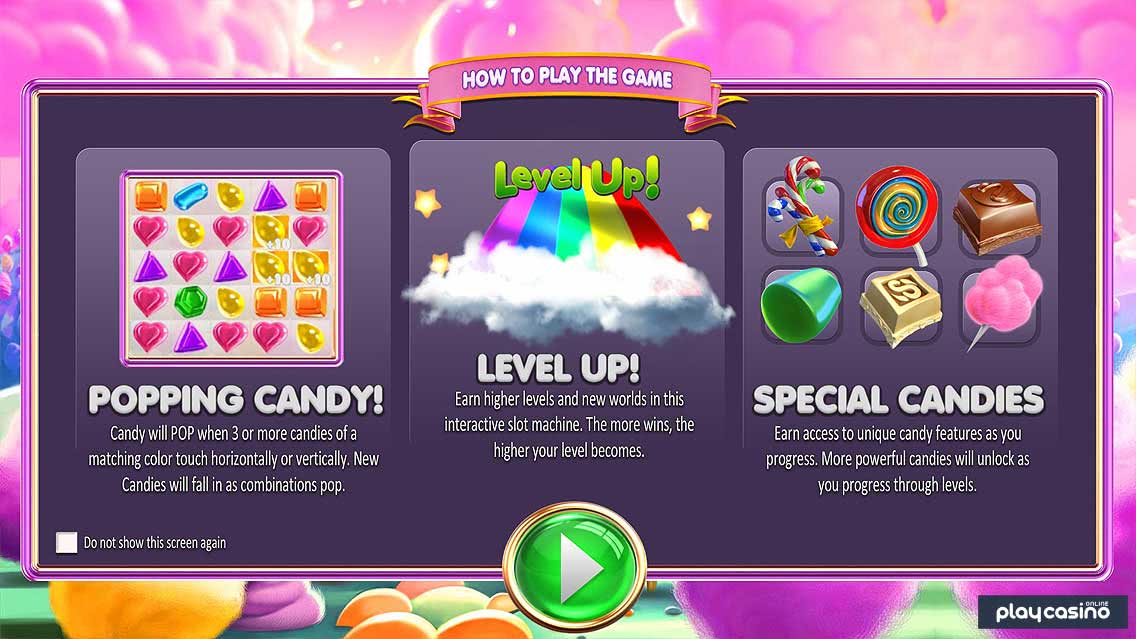 Level Up and Bonus Pattern

You’ll notice in the top-left corner of the screen that you have a meter that’s listing your level. You can earn points that will increase your level, and in turn, you’ll gain access to new special candy features. You get points by hitting winning combinations, and there are a total of five different worlds with 30 total levels of gameplay available as you proceed through these levels. Different worlds offer more ways to win in a variety of ways to give players a whole lot of replay value.

Along with this is the bonus pattern shown on the left-hand side of the game underneath the level listing. Whenever you get a set of winning combinations that covers the whole pattern (it doesn’t have to be just one winning combination), then you’ll complete it and have 600 total points added to your score. This makes it much easier to progress through the levels. However, the bonus pattern does not give you any additional payouts, which is something we would have liked to see. With that having been said, you’ll have to hit several wins to get it in the first place, which is plenty of a reward in and of itself. 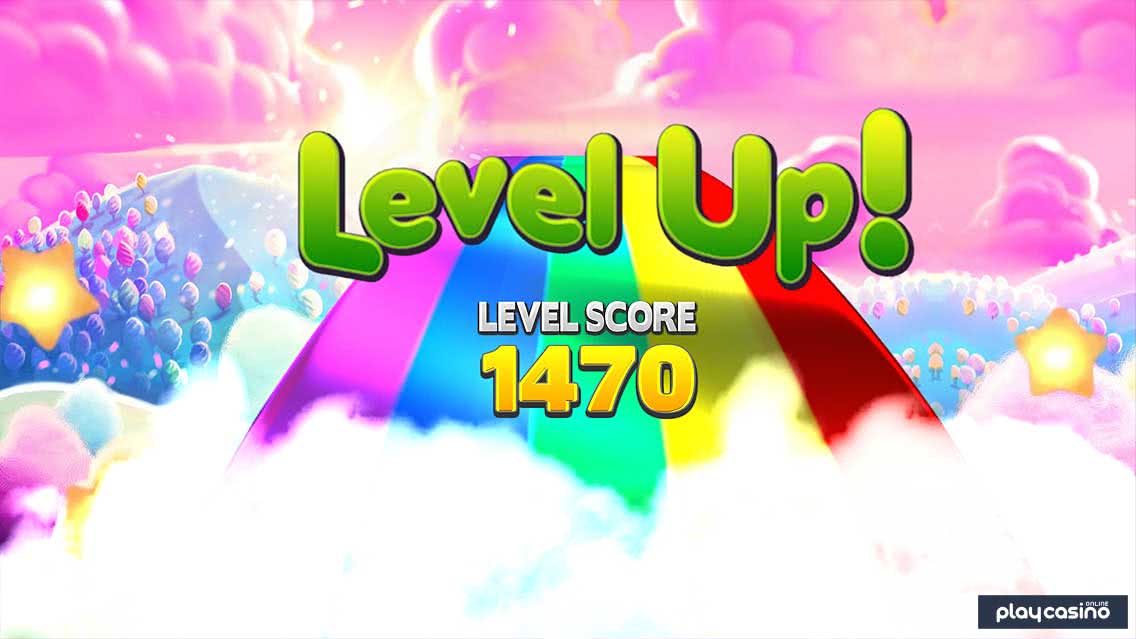 There are several different special candies available in this game, and you start with some of them. The Super Color symbol appears when you get at least four of a kind, and it basically adds a multiplier to your next round of wins from the pop feature for the same color. If you get five of a kind or more, then a Color Bomb appears, and if it combines with other matching colors, it will blow up all of the matching symbols on the entire board to make it much easier to get more wins with the pop feature.

On top of that, there are several special candies you get from leveling up. They give a very wide range of features, and some of that includes things like the lollipop symbol that you start with at level 1, which gives you the ability to get a free chance at wins when none appear by having the symbols on the game board shift around for a chance to form new winning combinations that you would have missed out on otherwise in the Sugar Pop online slot. 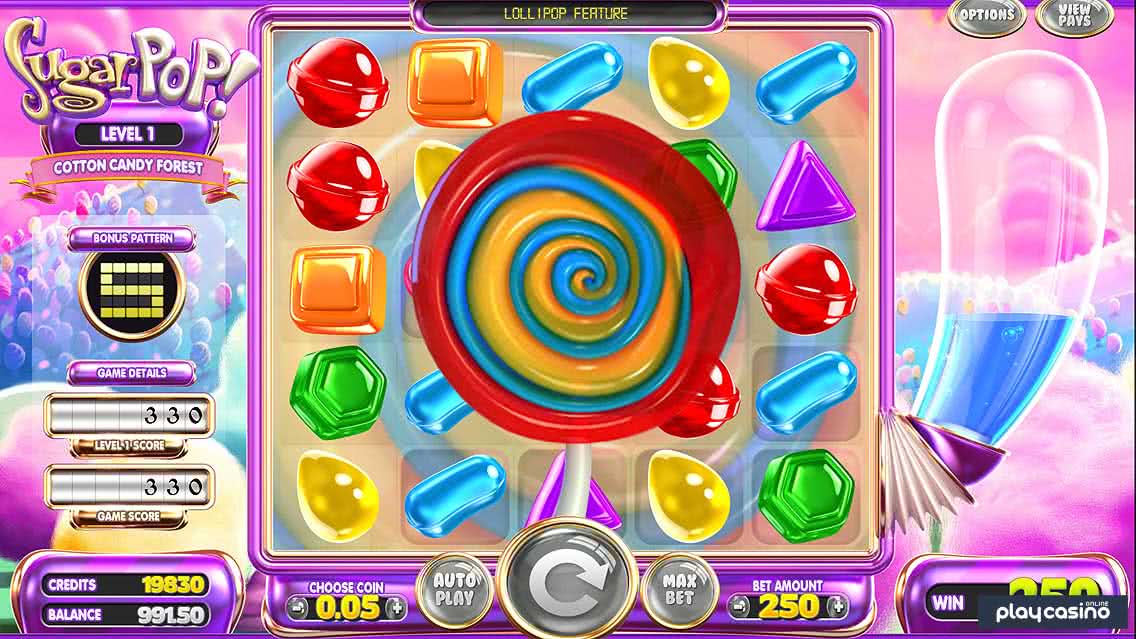 To calculate the values of wins in the Sugar Pop video slot, you’ll need to know the base values for each of the seven symbols. Those base values are as follows. The red candy is worth 20x, and the blue one earns you 15x. The green hexagon pays 12x, and it’s 10x for the yellow teardrop. With the orange square and pink heart candies, you’ll be paid 8x and 4x, respectively. Finally, the purple triangle gets you 6x. These are not the payouts for combinations of these symbols, however.

Instead, you’ll get paid these values each time a candy pops. For example, if you made a winning combination in the form of a six-candy cluster with the red candy (which is worth 20x), then you’ll win six times that amount for a total payout of 120x. This is a simple and straghtforward way of handling the payouts in this game, and it works out really well for players who like to verify that they are getting paid what they’re supposed to. 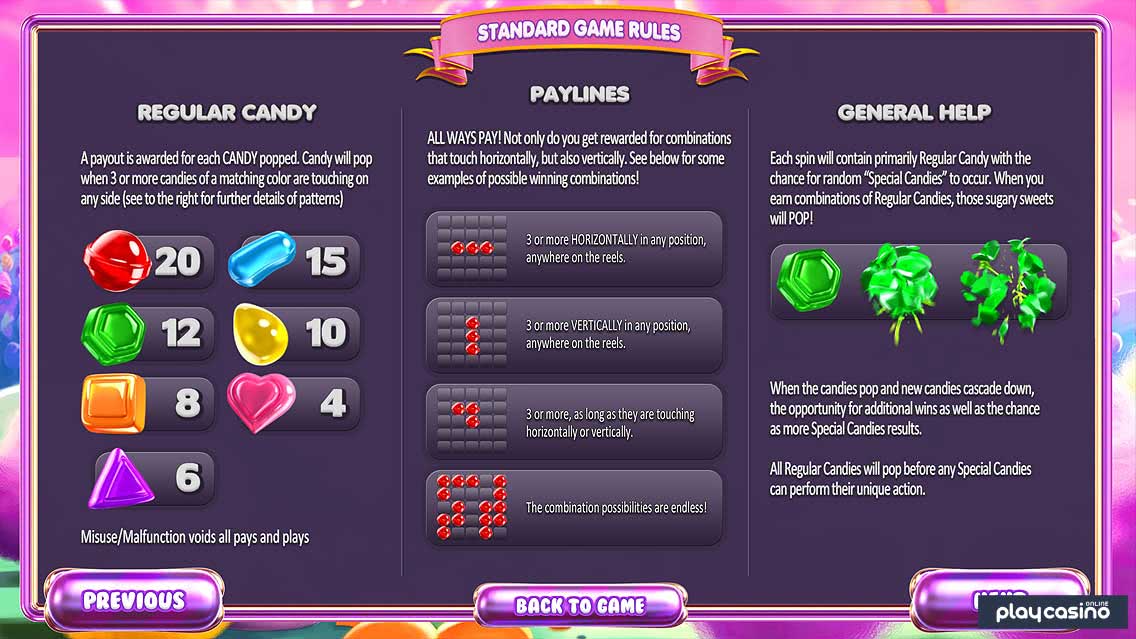 The really cool thing about the Sugar Pop online slot is that it takes the symbol-matching style of gameplay to another level with the leveling system. It also incorporates some extra features with the special symbols that give you a variety of ways to get paid while also keeping things fresh and exciting with the pop feature that comes after every regular win. There’s a whole lot of depth with multiple worlds to work your way through, and so the replay value is higher than the vast majority of other games that you’ll find anywhere.