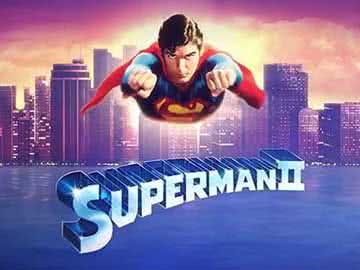 The Superman II slot by Playtech has 25 paylines with random wilds and several bonus features with free spins and more.

Superman II is, quite obviously, the sequel to the original Superman slot powered by Playtech. It’s bigger and better with more characters, more features, better graphics and more ways to win. They have produced a lot of games based on super hero themes and concepts, but this is one of the games that has stood the test of time in terms of licensing deals and maintaining player interest.

Layout and Format of the Superman II Slot

The format here is pretty standard. There are five reels with three rows, and players have 25 paylines to win on each spin. You don’t have to deal with coin sizes and number of coins per payline or any other complication with the bet sizing, however. They have it set up in a very simple way where all you have to do is pick how much you want to have wagered total on each of the paylines. You can bet between $0.01 and $1 per line, and that means you get an overall betting selection that starts at the $0.25 level and that goes up to $25 per spin. That’s plenty wide enough to cover virtually all players.

The Superman symbol is wild, and it shows up on each of the five reels to help you to get winning combinations you would have otherwise missed. You can pick up a strong payout of 5,000x if you line up five of these on a payline. Four will get you 1,000x, and three of a kind is worth 350x.

There’s a symbol for the Daily Planet with the big golden globe in the Superman II video slot on the first, third and fifth row. When you get these symbols all on the reels at once, then you’ll trigger a chance to pick up a random choice between five different bonus features. These will show up on the headline area of a newspaper on the screen to show you which feature you have been awarded before another screen comes up to actually play the feature.

The Battle for Metropolis

In this feature, you’ll be battling villains up on the tops of the buildings of Metropolis. You’ll pick from several different shields to be awarded payouts in this game, and you have a chance to pick up the ray symbol here and be instantly awarded all of the wins that the bonus round has to offer. We have to say that’s a pretty nice thing to hit.

If you get this feature, you can actually win unlimited free spins. The phantom zone shows up as a 2×2 symbol on the reels and acts as a big four-symbol wild. You’ll get a different item from a set at the bottom of the screen, and it will affect your free spins. You can get multipliers of 2x or 3x with it, or you can pick up a time bomb that will end the feature. Superman shields can be collected to stop those bombs and keep the feature going as well.

During the Skyline Fight feature of the Superman II online slot, you’ll start with 10 free spins and a 1x multiplier on a counter in the top-left corner of the screen. When a Superman appears on the third reel, you’ll see that the free spins counter becomes frozen, so you stop having free spins removed from your total. If you get more of the Superman character symbol while the counter is stopped, you’ll get a multiplier increase worth up to 5x.

If the villain appears, then the multiplier gets dropped back down to 1x, and the free spins counter starts going down again. This is another example of a feature where you can get tons of free spins if you hit the right symbols in the right place at the right time.

For yet another free spins feature in this game, you’ll start with 15 free spins. If you get an X-Ray on the third reel, then it will turn into a wild Superman logo, but it will also add another wild to the second and fourth reels. This means you’ll have a much easier time hitting five-of-a-kind payouts on top of other big wins and multi-line combinations on the same spin.

You’ll start this round with a couple of dozen of Superman shields in front of you. You’ll pick different shields to uncover symbols until you get five matching symbols. The symbol you get five of will determine your payout, which ranges from 500x to 2,500x. These are some pretty solid wins, but the result is ultimately random.

What you’ll notice about this part of the pay table is that the wins are pretty well-distributed. This gives the game a balanced enough pay table.

You also need to realize that this game has four progressive jackpots, and the top one pays six figures as a minimum. You have a random chance of winning each jackpot on every real money spin no matter how much you’re betting.

The glasses symbol pays 100x for five, and you can also get 100x for five of the piece of kryptonite. The A and K symbols give you a 75x win if you get five of a kind on a payline, and five of the Q or J pays 50x. All four of the card rank symbols are done in the same font as the Superman video slot logo, so it fits in really well with the overall visual motif of the game.

With the Superman II online slot by Playtech, you’re being given chances to win in several different ways. There are big progressive jackpots, big static jackpots, multipliers, free spins, extra wilds and all kinds of other goodies with the selection of bonus features. This is definitely a game for players who want a shot at going big or going home.