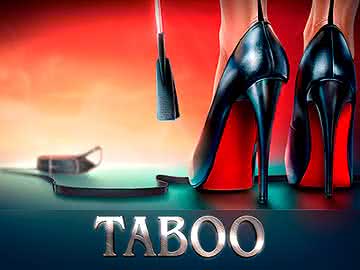 Endorphina in particular is known for jumping in with unique and unusual themes for their games, and that’s the case here as well. They’ve given the subject matter a pretty reasonable treatment with all things considered, and it’s been handled in a pretty tasteful way when they didn’t necessarily have to do that, which is a good thing.

Format and Layout of the Taboo Slot

The basic format used in this game is pretty much as usual as you can get with five reels and three rows. You’ll find 25 paylines that pay from left to right only across these reels, and you’ll find a number of options to adjust your betting. One of those would allow you to use fewer than 25 paylines activated at any given time. This will lower your return to player percentage, which means lower chances of coming out as a winner in each session, so we have to recommend that you don’t do that.

If you want to adjust the size of your bet, you’ll have two other options that will make it easy to pick out exactly the size of wager that you’re looking for. In the bottom-left corner, you can pick to wager between one and ten coins on each line. In the top-left corner, you can pick from a number of different coin sizes that range from $0.01 to $1. This means your smallest available bet size is $0.25 per turn when all of the paylines are turned on, and it goes as high as $250 per spin on the upper end. 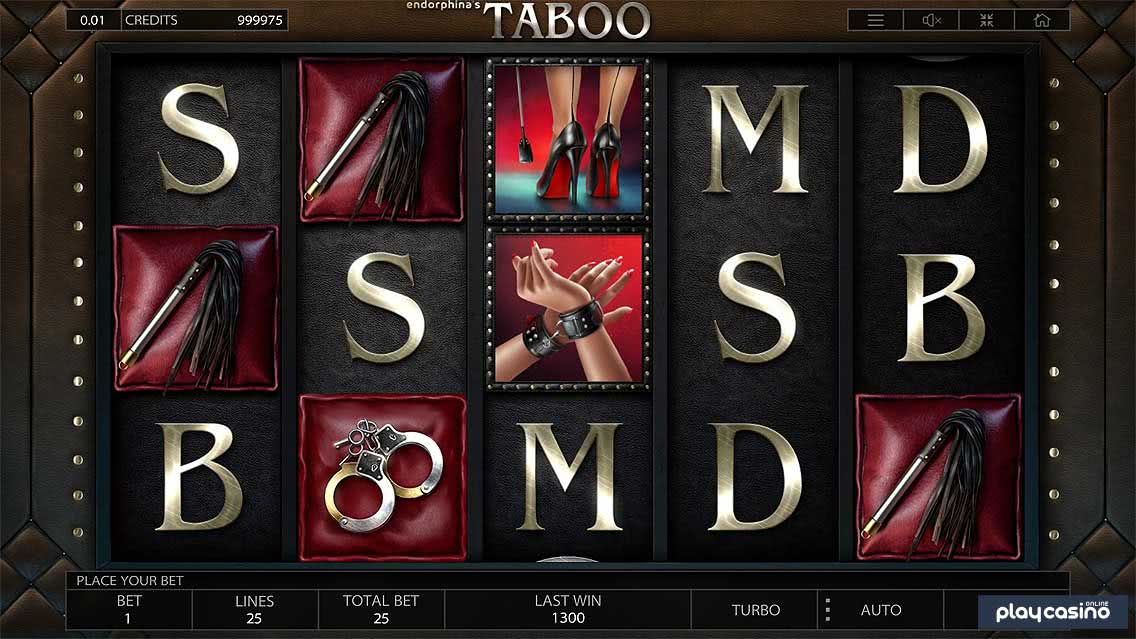 The wild symbol in this game is pretty hard to miss because it spells out “WILD” in gold letters right across it. The symbol itself consists of a red leather pillow with various black and metal trim. This symbol shows up on the second, third and fourth reels only, so you will not be able to get any specific payouts just for lining up wilds. However, in the Taboo video slot, the wild symbol will always expand to cover the whole reel. This means you’ll get triple the wilds as you would typically when one appears in a video slot, and you don’t need us to tell you the kind of value that can lead to.

The only symbol that the wild will not substitute for is the bonus triskele symbol, which we’ll describe below.

In this game, the triskele symbol is a black, metallic and red circle that looks like a yin-yang with three parts. This is the bonus symbol for the Taboo online slot, and it gives players a shot at a bonus wheel style of game when you get at least three on the reels. They show up on all five reels, and that affects how the bonus feature can play out.

If you get to the Triskele Wheel Game, you’ll see various spots on a wheel that you’ll spin. You’ll get a spin for each bonus symbol that you used to trigger the feature. This wheel has wins that go from the 10x level up to the 25x level, and these are based on multiples of your total overall wager. You will also have four spots on this wheel that lead to another feature called the Red Room Bonus. 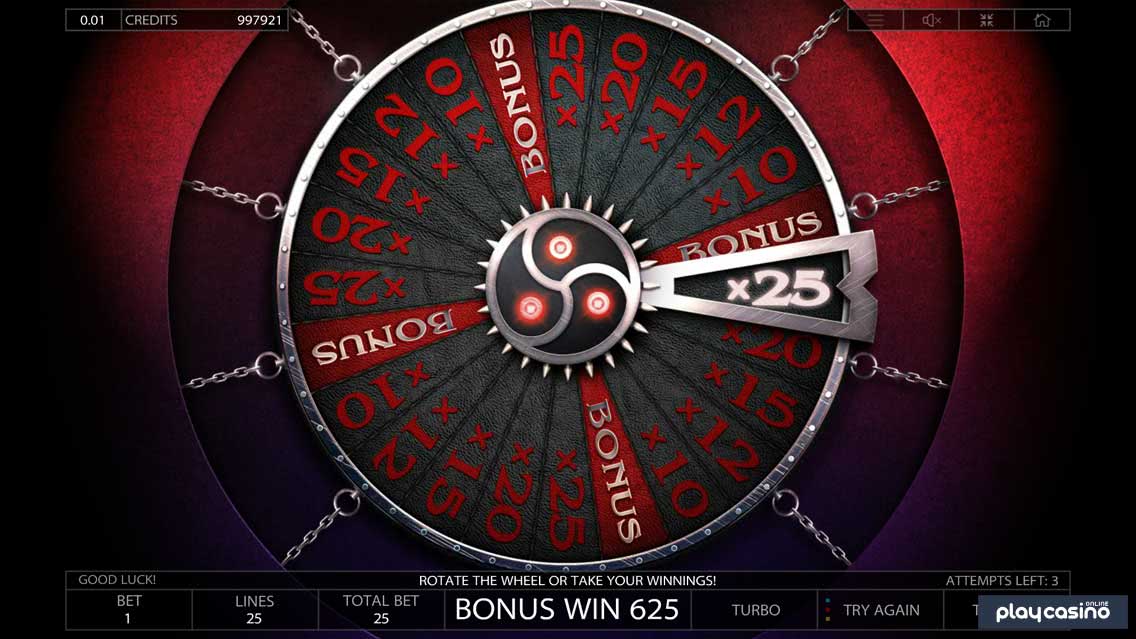 The most valuable feature in the game is the Red Room Bonus round, and it’s based on a sadomasochistic BDSM scene. You’ll see a variety of pattles, whips and other instruments for giving pain to another human being on the wall, and you’ll pick from those to decide which to use in an apparent scene that is happening in the room (that you can’t actually see). While picking from these, you’ll get a bonus payout for each pick, and you have a chance to be able to continue to up to five picks. If you make it to five picks, you’ll get the largest win available in the bonus game.

One very important symbol in the Taboo online slot is the pair of high heels. You can tell that someone is standing in them and that a riding crop is being held by that person, and they’re standing on a blue floor with a red background. Five of this scattered high heels symbol anywhere on the board pays out 1,250x. You can make that 250x for four of a kind, and your scatter win for three of these symbols is 50x. 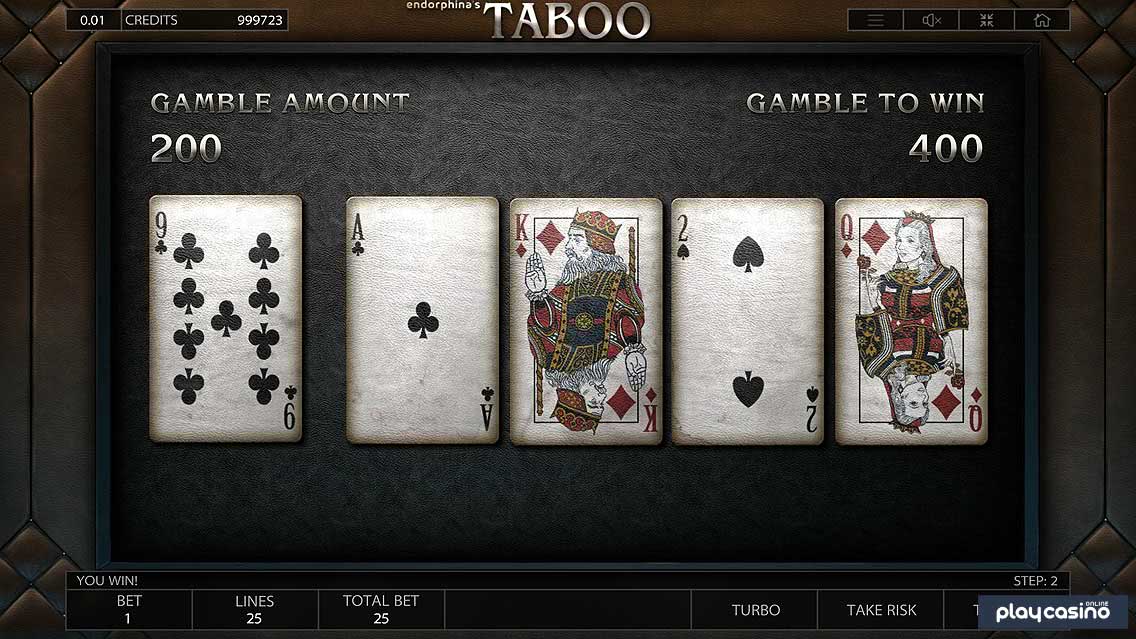 The symbol of a submissive wearing a collar with a black bustier and a chain attached to the collar on a blue background is the jackpot symbol in this game, and it’s responsible for the largest win you can get on a single line. This payout is worth 10,000x for five on an activated payline, which is a pretty huge prize. Wins of 200x, 25x and 2x are available for four of a kind, three of a kind and two of a kind, respectively. You’ll also notice that this symbol is the only one in the Taboo video slot that pays for only two of a kind.

Other Paying Symbols and Wins

Four other symbols have 100x wins for five of a kind as well. Those are the B, D, S and M symbols. These symbols each pay 100x when you line up five on a payline, and we think that’s a clever way of avoiding falling back to the card rank symbols here. 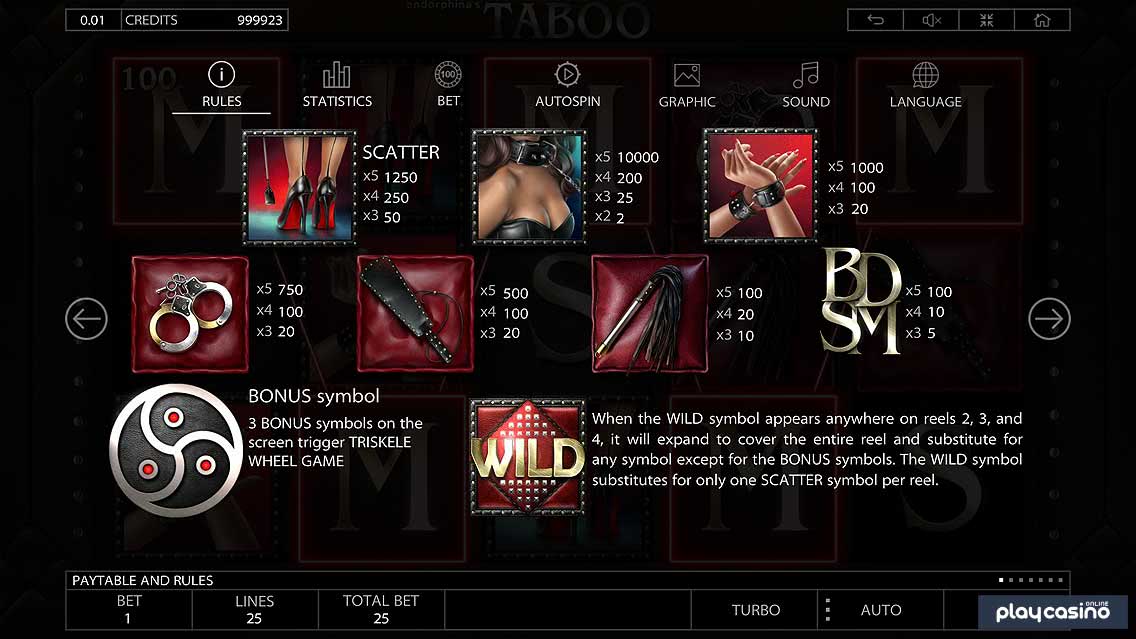 With the Taboo online slot, players are getting an experience with a popular type of theme that films, books, television shows and other forms of media have built up to tremendous levels. Endorphina has done an excellent job with this title, and it’s level of popularity isn’t all that surprising considering how popular the source material was.