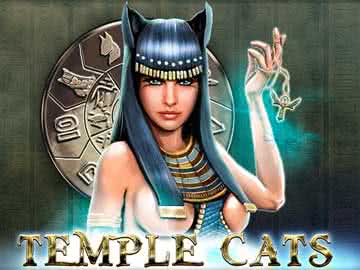 The Temple Cats online slot by Endorphina centers around sacred cats that have been worshipped in a number of religions in the past. It has 10 paylines and a free spins bonus feature where random symbols can be selected to expand for bigger wins.

Throughout history, we’ve seen a variety of different religions and cultures that have worshipped cats in different forms. The Temple Cats video slot pays homage to this motif from an Egyptian type of angle, and Endorphina has done a solid job in putting together this theme in a cohesive way that includes all of the different aspects of the experience. In terms of gameplay, they’ve also combined some strong top payouts with having a lot of the game’s symbols pay out for just two of a kind, which increases the hit-rate and keeps the volatility from getting too high. This creates a more balanced affair for players and makes this game pretty enjoyable.

Format and Layout of the Temple Cats Slot

The format for this game is designed for a balance between action and chances to hit big pays. Five reels, three horizontal rows and 10 paylines that only pay from left to right flesh things out. With that having been said, you need to take care not to play with fewer than 10 lines activated because that drops down the return to player percentage for this title and makes it less likely that you’ll come out on top after your sessions, which is something that nobody wants to have to deal with. 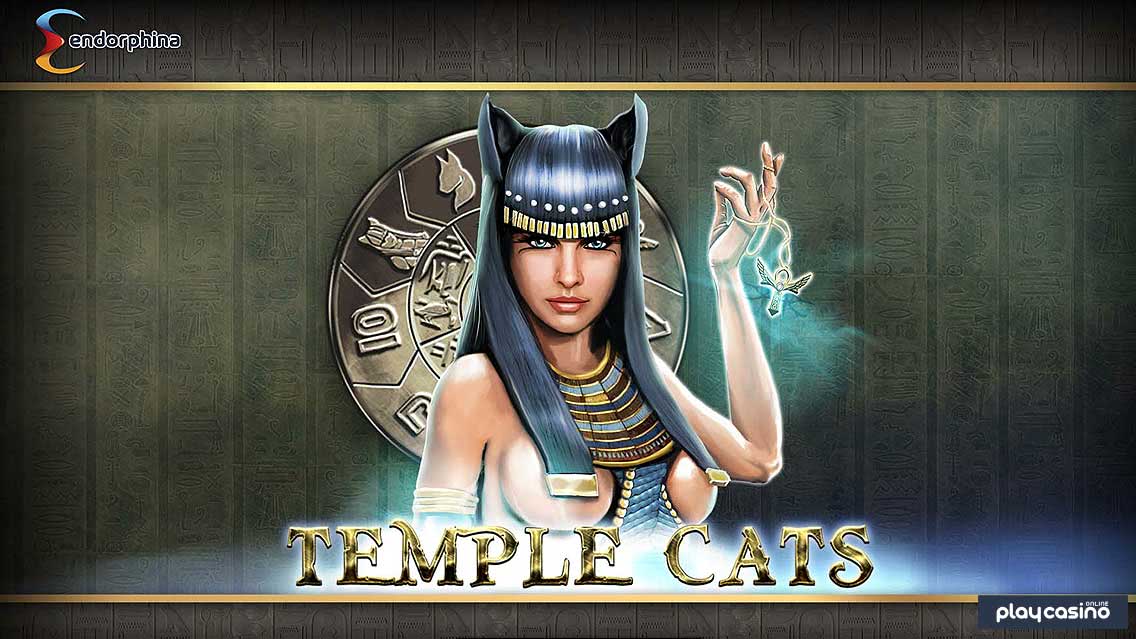 For the betting, things wind up being on even numbers for the most part with all 10 paylines turned on. Your coin sizes start off at the $0.01 level, so you can play this title for as little as $0.10 per turn. Coins go up to $1, but you can also increase your bet size by betting up to 10 coins on each of those lines. This puts the maximum bet size up at the $100 level, which is plenty high enough even for high rollers. Endorphina obviously has an inclusive stance on their games with betting ranges this wide. 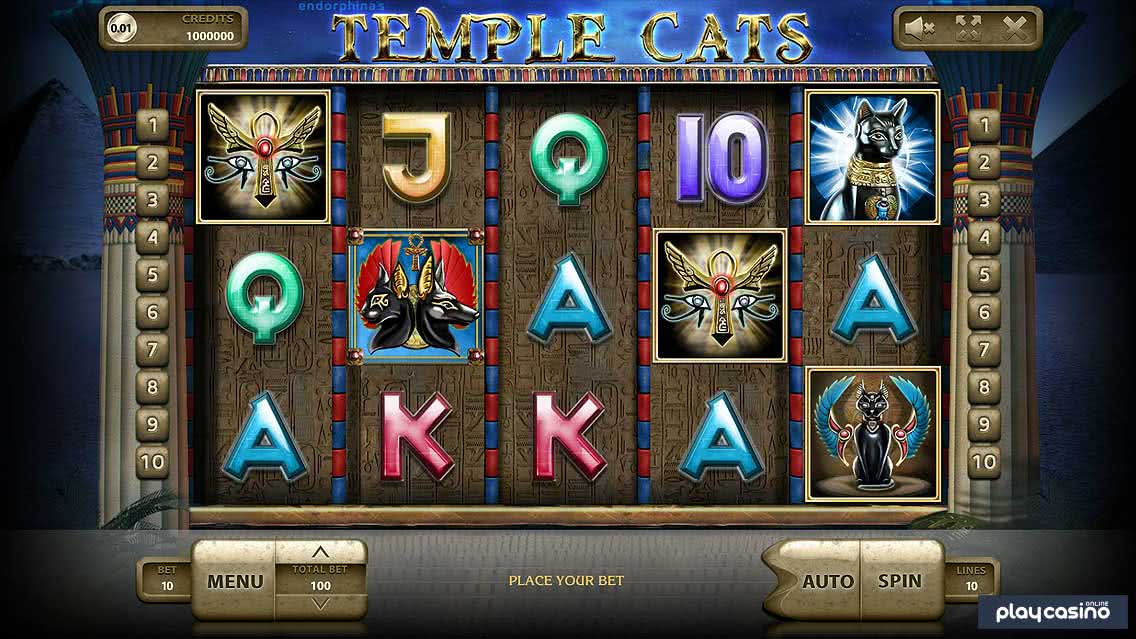 In most online slots, the wild symbol and the scatter symbol are separate. In the Temple Cats video slots, however, they’re actually the same symbol. It’s easy to remember it because it’s the only symbol that has two different cats on it. These are cats as in the animal and not women dressed up as cats. They substitute for all symbols, which is a lot of fun since you don’t have to miss out on them substituting for anything like you often do with other five-reel titles, and they show up on every single reel, which makes it even easier for them to give you extra wins you would have missed without them. 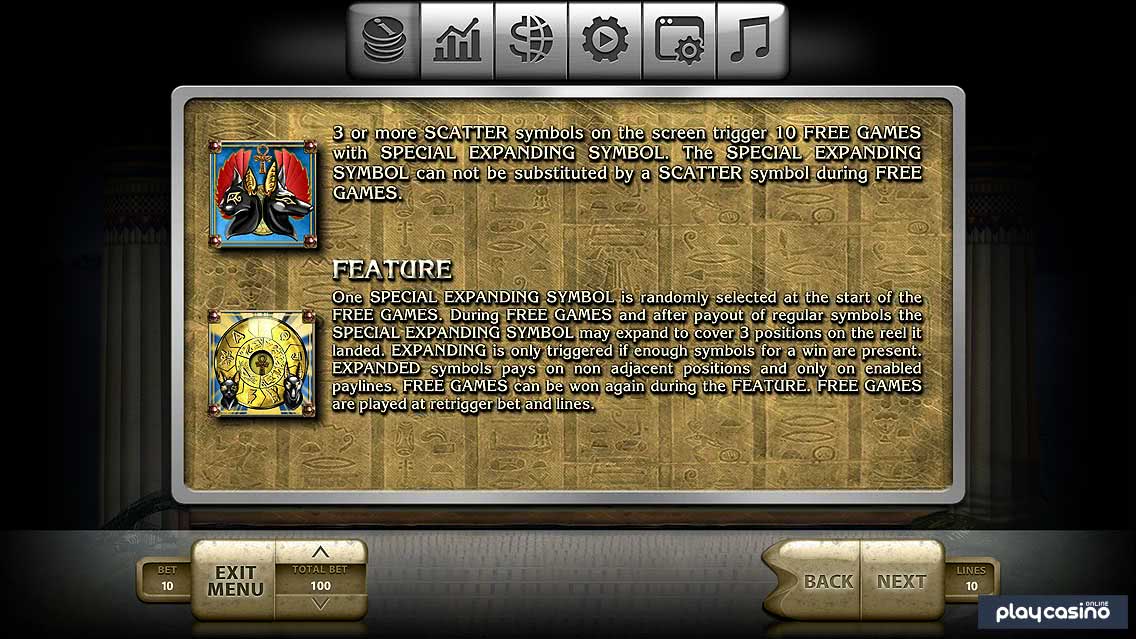 Three of more of this symbol gives you a payout, but you have to remember that they don’t have to show up on a payline to win. Five of a kind gets you a 2,000x prize, the second-largest that the game has available. Four of a kind will also earn you 200x, and you can pick up a 20x payout for three of a kind as well. These are some pretty solid prizes, and that’s complicated further by the fact that they help you to get other payouts on the paylines themselves aside from the scatter wins.

The main bonus feature for the Temple Cats video slot is a free spins round that gives players expanding symbols that they wouldn’t have normally gotten. Three or more of the scattered double cats symbol gets you a set of 10 free spins. Note that you can add another 10 free turns to the mix by getting another three scatters on the reels (in any position) during this feature. 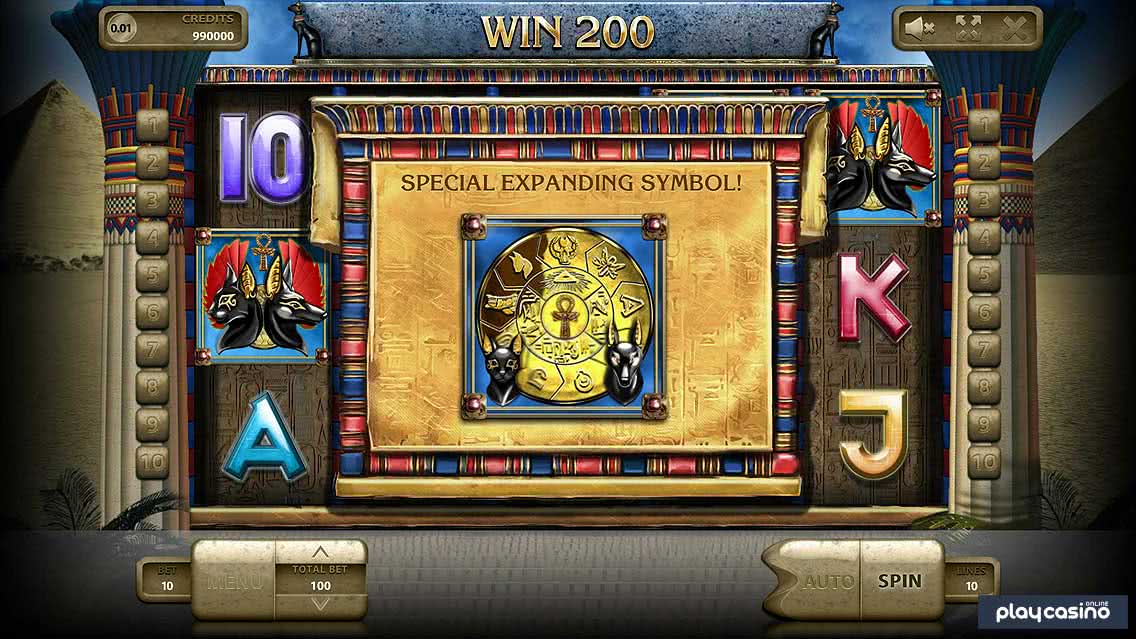 At the beginning of the feature, a random symbol will be chosen to be an expanding symbol. Whenever this appears, it pays out normally, and then it will expand if that will help you to pick up any extra wins. You will not lose out on any pre-existing wins by having these symbols cover up any symbols that were already giving you payouts, so it’s all an increase in value. This isn’t the type of thing that you normally see in a free spins bonus round, and we like how the sneaky nature of a cat was captured along these lines. 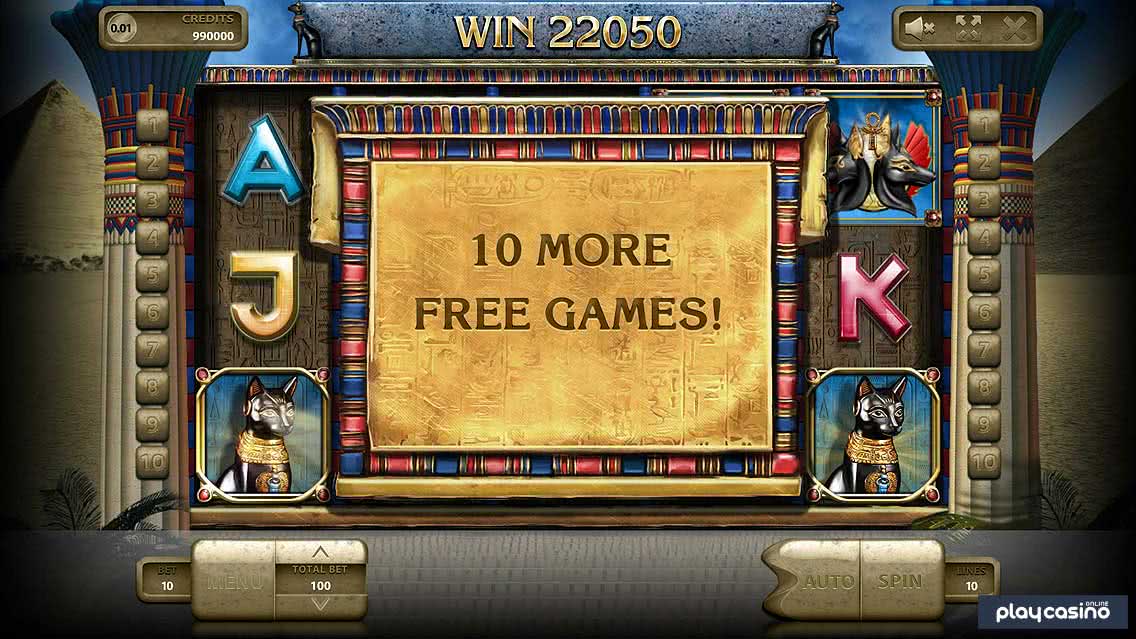 Most players think that they can just ignore any gamble features that a slot has to offer and be fine. In most cases, that would be true. However, in the Temple Cats online slot, things are a bit different. You’ll need to look at it (though not necessarily play it) each time you get a win because you have a chance to get a further edge against the casino. A failure to follow this strategy will keep you from getting the best RTP percentage possible from this game. 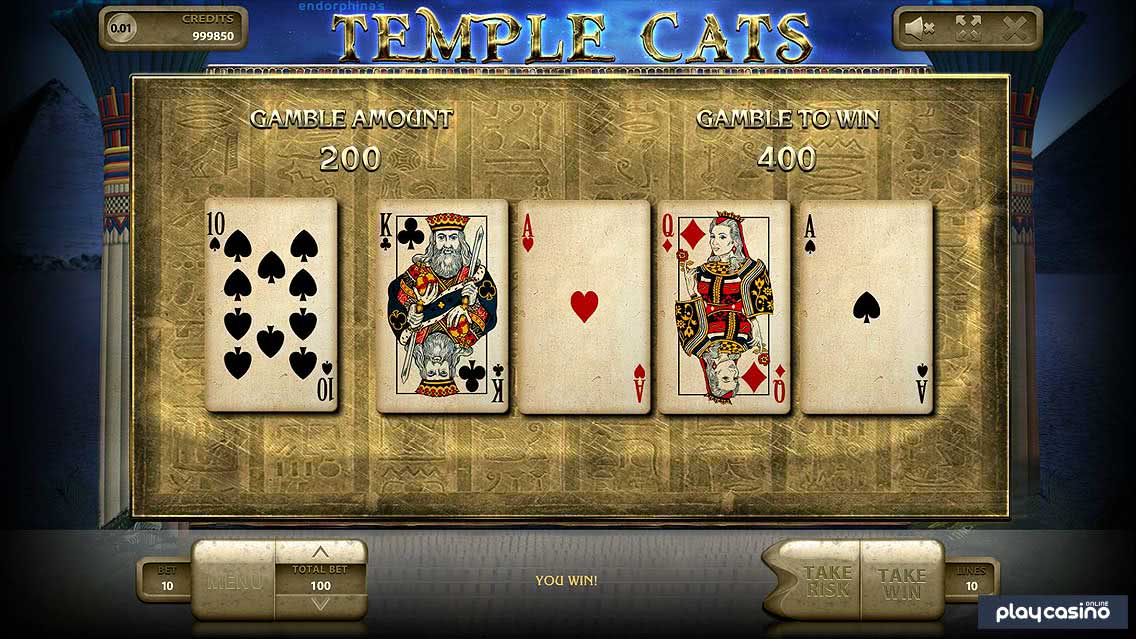 Whenever you get a win and choose the “take risk” button, you’ll be taken to a set of five cards. One of them is turned face-up, and the other four are your options to pick from to try to draw a card that’s bigger than the one you see. However, the catch here is that you don’t actually have to play the game once you’ve looked at the cards. If the card is a two, three, four or five, then you should play the game and pick one of the four cards because you have an edge against the casino. The edge is 1 percent with a five, 13 percent with a four, 21 percent with a three and 62 percent with a two.

Other Symbols and Payouts

The blue A and red K symbols start off the card rank portion of the pay table. Either will give you 150x for five of a kind. You’ll also have a chance to earn wins of 100x for five of the green Q, yellow J or purple 10 symbols. 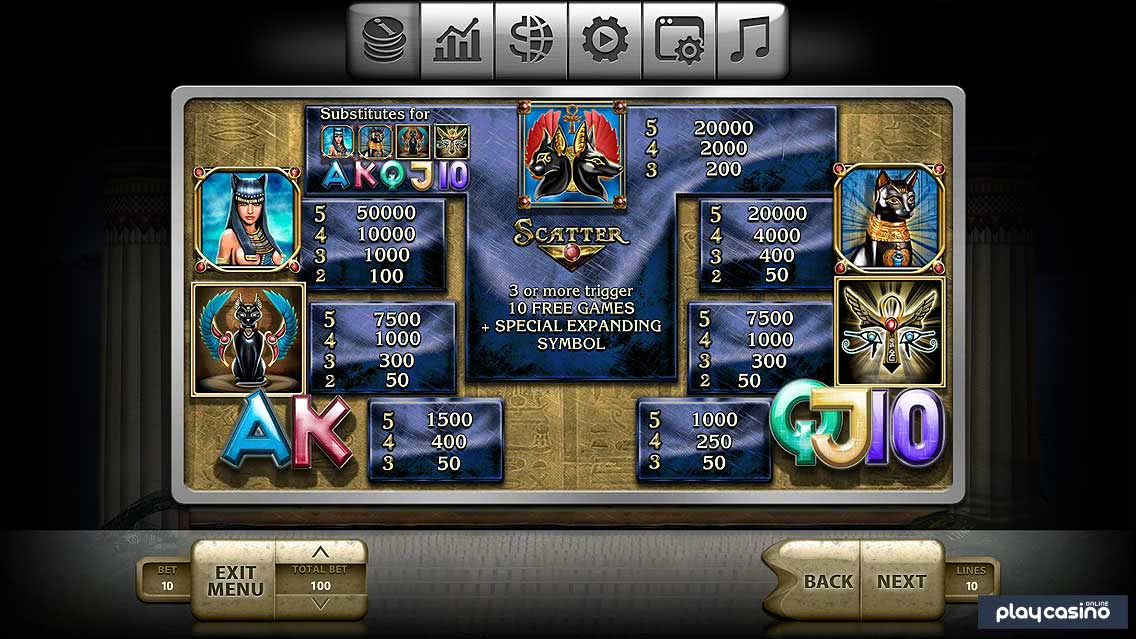 One of the things that we really like about how Endorphina handled the Temple Cats video slot is that it’s not just a plain Egyptian-themed game like we have all seen before over and over again. Instead, they went with a different style for the features, and they focused on one specific aspect of the ancient culture, which makes this game stand out from the rest of the sub-genre.