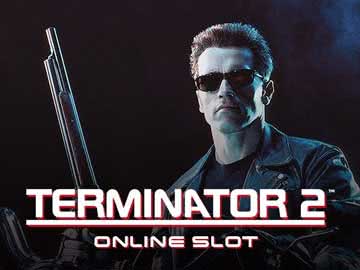 Based on the hit action movie, Microgaming’s Terminator 2 slot has 243 ways to win and tremendous bonus features.

One of the most popular action films of all time is Terminator 2, and it’s an example of the rare exception where a sequel was much bigger than the original. Microgaming built the Terminator 2 slot around the themes and characters from this hit film, and they didn’t miss anything that could have been made into a feature or significant part of the gaming experience. Because of this, it’s generally considered to be one of the best, if not the absolute best, movie-based online slots ever produced.

Format and Layout of the Terminator 2 Slot

The layout of this slot is designed to provide as much action as the original movie, and Microgaming did a good job with choosing it effectively. There are five reels, three rows and 243 ways to get paid on each spin. This is thanks to the “all ways” format, which means all regular symbols pay left to right no matter which individual spots they land on with each individual reel.

Betting is set up to always be centered around 30-coin wagers. You can multiply this by a factor of up to 10 for as many as 300 coins being wagered on each turn, and you can pick coins that go from $0.01 to $0.50 apiece. The smallest bet size available overall is $0.30 per spin, but you can wager up to $150 per spin, so no one will have trouble picking out a bet size that fits what they’re looking to bet.

Because all of the payouts in this game scale according to the bet size, we’re going to base all of the prizes we discuss on a wager of $1.50. If you pick a different total wager size, you’ll need to scale the payouts appropriately. 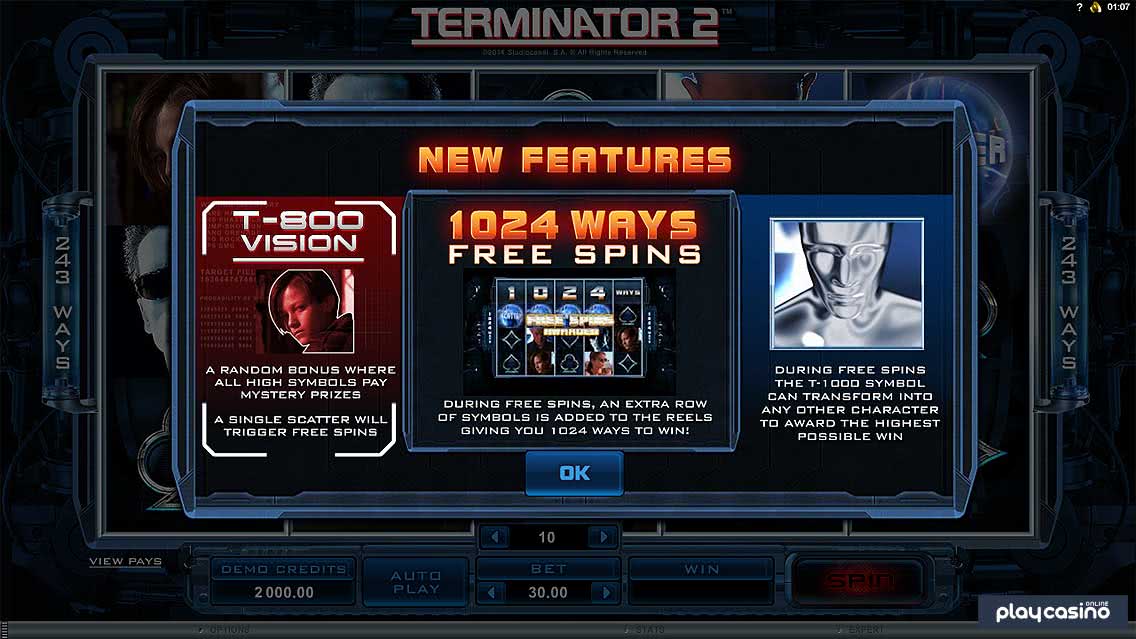 The Terminator 2 online slot uses the T2 symbol as the wild, which was the short logo for the original film. When you get five of them, you’ll earn a 75x payout. The win drops down to 15x for four and 2.50x for three of a kind. These are pretty solid pays, though they are not the largest payouts in the game, and you’ll find that there are plenty of other ways to get more significant wins. 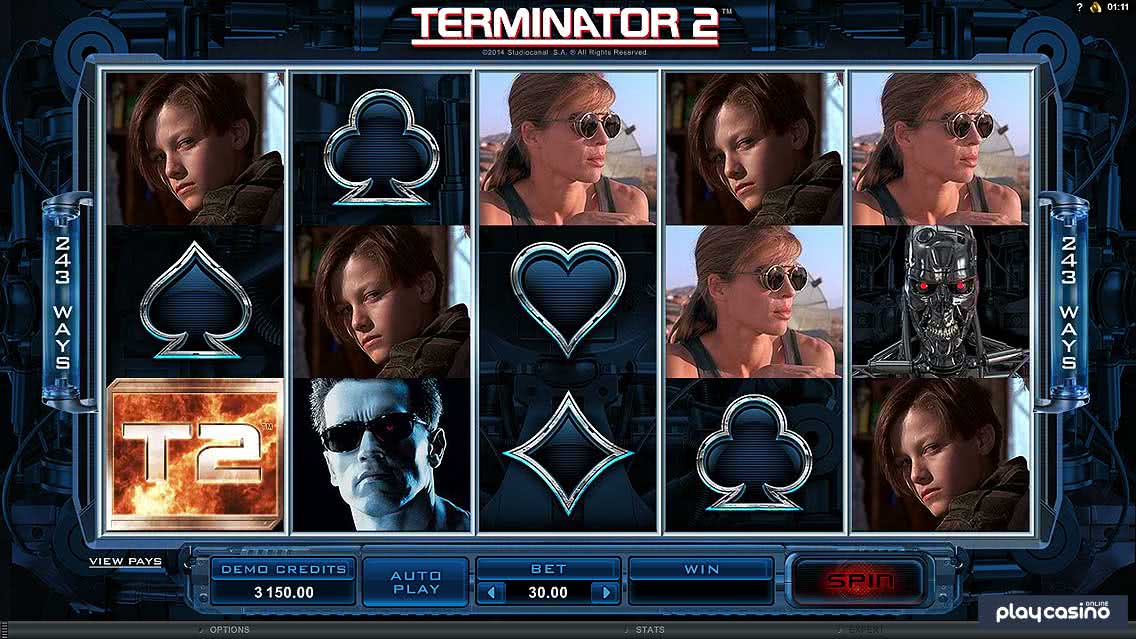 A very important visual effect from the movie was seeing things from the point of view of the T-800, the main character in the film played by Arnold himself. You can trigger a T-800 Vision Feature at random on any winning spin, and it does a couple of things to give you a ton of value in a short period of time.

First, it makes it so that you only need one scatter symbol on the entire game board in order to trigger the free spins bonus feature. We’ll look at that feature below, but it suffices to say that this by itself is a very convenient feature to have. On top of making it much easier to get free spins, you’ll also get an instant payout for any of the five character symbols that appear on the reels. 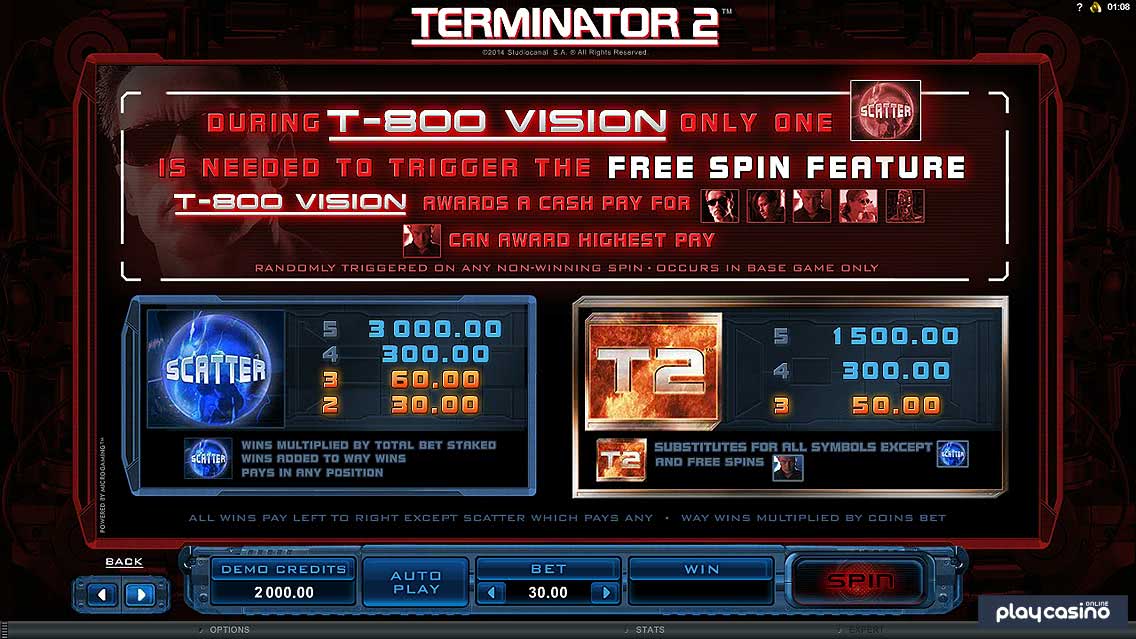 There is a blue sphere that acts as the scatter in the Terminator 2 online slot. Like the wild, it shows up on all five reels. Five of a kind gets a large payout of 150x, which is the single-largest individual payout in the whole game. Four of a kind pays out 15x. You can also get 3x or 1.5x for three of a kind or two of a kind, respectively. This is the only symbol in the game that doesn’t have to show up on consecutive left-to-right reels to give you a payout. 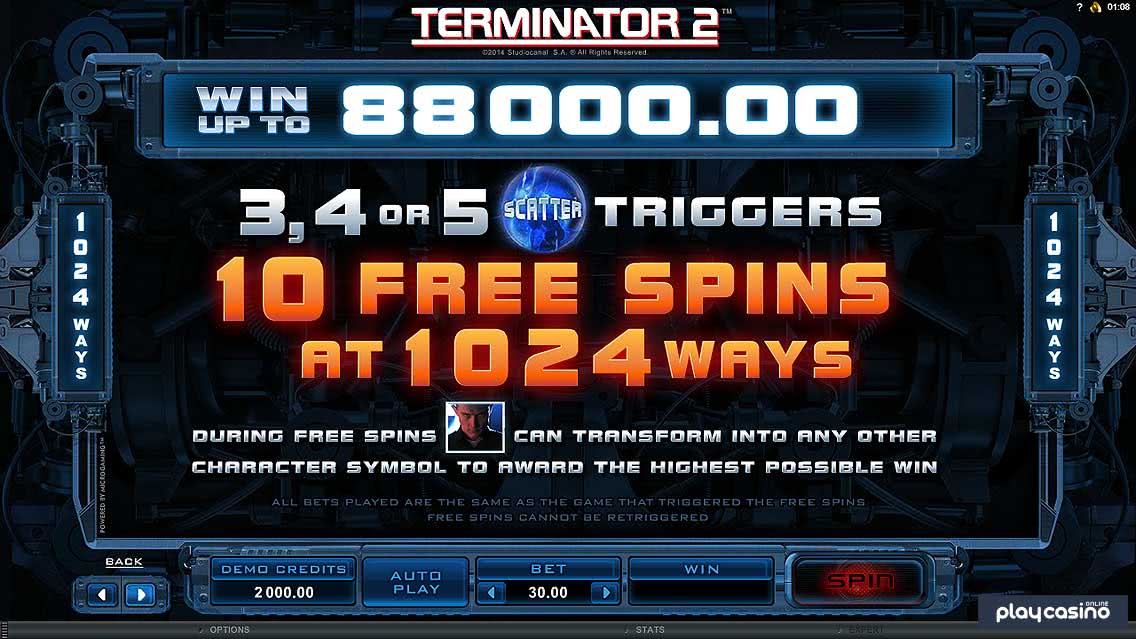 There’s a whole lot going on in this game’s free spins feature. First, you’ll actually trigger it by getting three or more of the scatter symbol in most cases. However, if you have the T-800 Vision Feature activated, then you’ll only need one scatter to be taken to this bonus feature, which is very convenient. You’ll always be given 10 free spins no matter how many blue spheres you used to trigger the round.

You’ll find two different changes in how the game works for this mode. First, the game itself will expand to add one more row of symbols to become a five-by-four format slot. The Terminator 2 video slot then has 1,024 ways to win because it retains the all-ways layout, which obviously means more chances for wins. 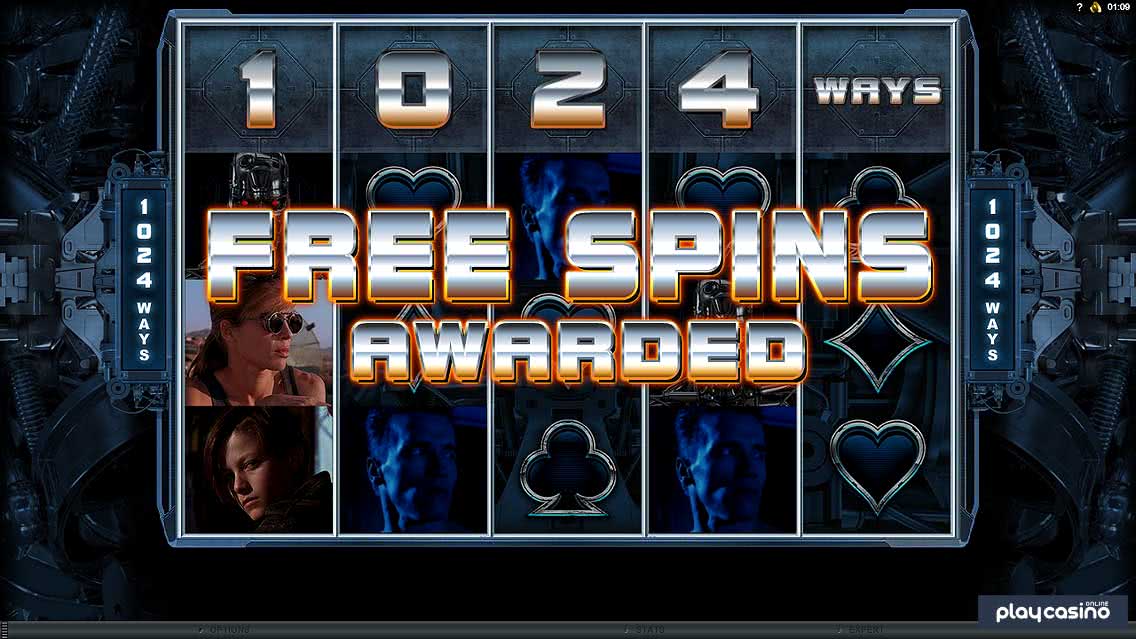 The second change is in how the T-1000 symbol operates. It’s the major villain of the second film in the Terminator franchise, but he helps you out quite a bit here. What he does for you is turns into other characters if it’ll help you to get bigger payouts, which is sort of like a limited extra wild symbol. However, there’s a little bit of a trade-off in that he can no longer be substituted for by the T2 wild until the feature is over.

There are five character symbols in the Terminator 2 online slot. The T-800 with his skin on pays 40x for five of a kind, and you can earn 25x for five of the kid version of John Connor. The T-1000 villain gets you 20x with five, and five of Sarah Connor (John’s mother) earns 15x. Another T-800 symbol, this time without his skin on, pays 10x. 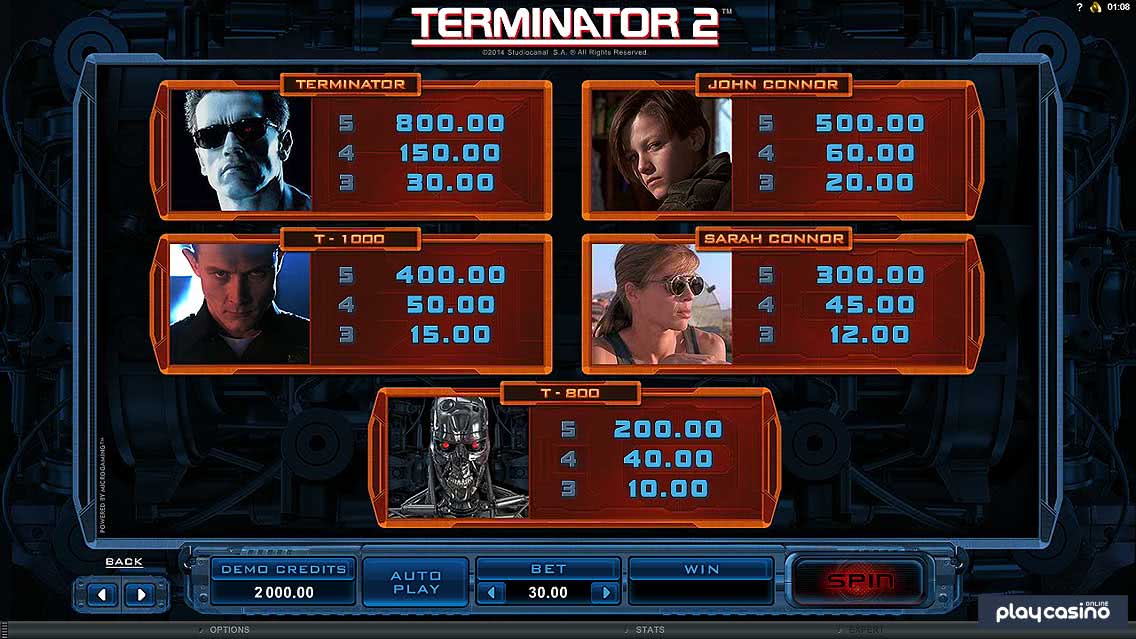 Instead of using card rank symbols, Microgaming used the four card suits for the minor symbols in this game. They use a black, shiny visual approach with a silver, metallic border to create an excellent look that fits with the visual appeal of the game really well. You can get 5x for five of the spade or heart, and the win for five of a kind of the diamond or club is 2.5x. 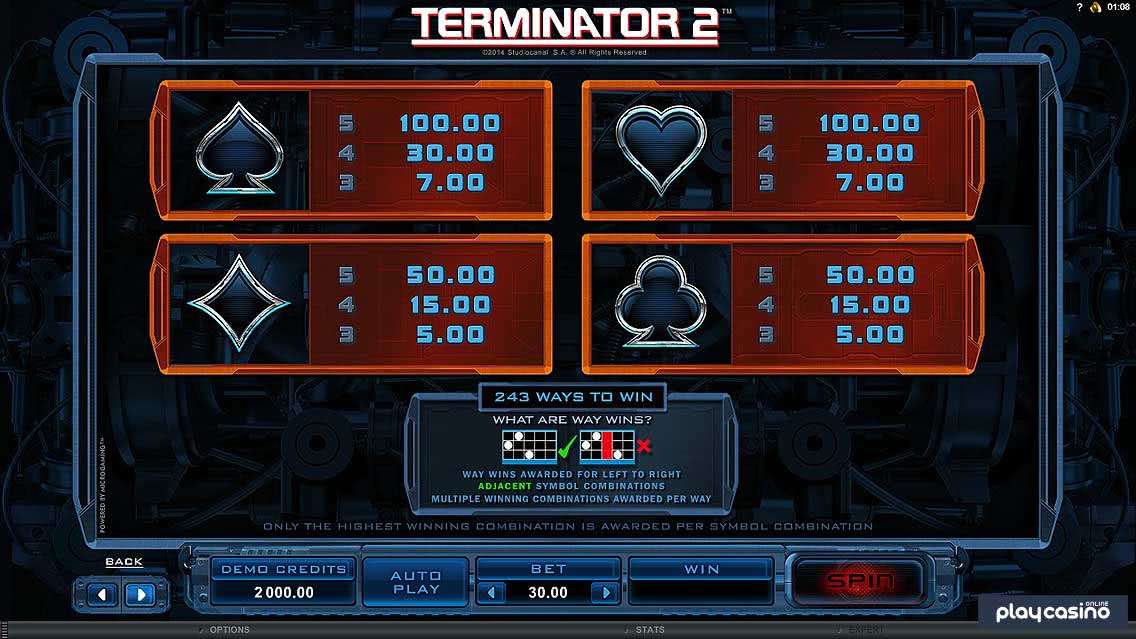 The Terminator 2 video slot by Microgaming is packed completely full of bonus features and other goodies. It’s the example tons of experts in the industry point to when someone wants to see what a movie-based slot should be like because it pulls together all of the major characters from the film and gives them important roles. The major hero and villain are given prominent roles as well, especially with the features, using their own abilities from the movie to create features that just make sense. Overall, it’s not exactly surprising to see why this game is so ridiculously popular.