The Angler Slot by BetSoft Reviewed 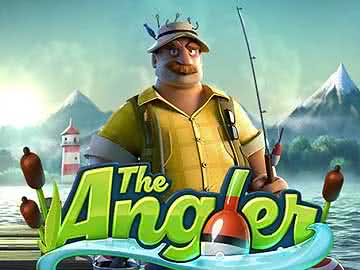 The Angler video slot by BetSoft uses excellent 3D graphics as part of a fishing-themed experience. You can get a free spins bonus round with wilds that hold in place, and you can get a fishing-based bonus feature with chances to reel in some big time prizes.

There’s a bit of a “blind spot” in the themes commonly used for online slots in that there are a lot of games based on deep sea motifs, but there aren’t that many based on things that happen on the water’s surface. The Angler video slot by BetSoft gives players a chance to experience a fishing-themed title that fits right into this blind spot.

The graphics are incredible in this game with all kinds of 3D characters and creatures, and the gameplay is very smooth with a high hit-rate, low-volatility experience that’s perfect for sitting back and relaxing, just like you would if you were out fishing. The only difference is that, in this game, you’re fishing for some wins.

Play The Angler Slot for Free

Format and Layout for The Angler Slot

The layout for this game is based on the premise that the game itself wants to bring you a pretty smooth and relaxing experience to match up with the fishing theme. From that point of view, they’ve kept it as basic as possible with five reels, three rows and 20 paylines of action. There is a control to change the number of paylines away from the maximum of 20, but if you do that, then it will drop your RTP, and that means worse chances of winning during each session.

Instead, change your bet sizes by using the controls for the coin size and the number of coins per line. This gives you between one and five coins per line along with coins that go from $0.01 to $1 each. The overall betting range is $0.20 to $100, and that’s wide enough to cover pretty much anyone who wants to play this game. The fact that they allow a bet size as low as $0.20 on this title also shows that they’re serious about giving you as relaxing of an experience as they can.

One of the symbols you’ll want to see on the reels as much as possible is the octopus. The octopus is holding a wooden sign that spells out “wild” in rope, and it’s the wild symbol in this game. You’ll find this guy on the second, third, fourth and fifth reels, and he’s a pretty big deal because he substitutes for all of the regular-paying symbols that this game has to offer. He does not substitute for the free spins symbol or the bonus symbol, but that’s normal for wild symbols in video slots. 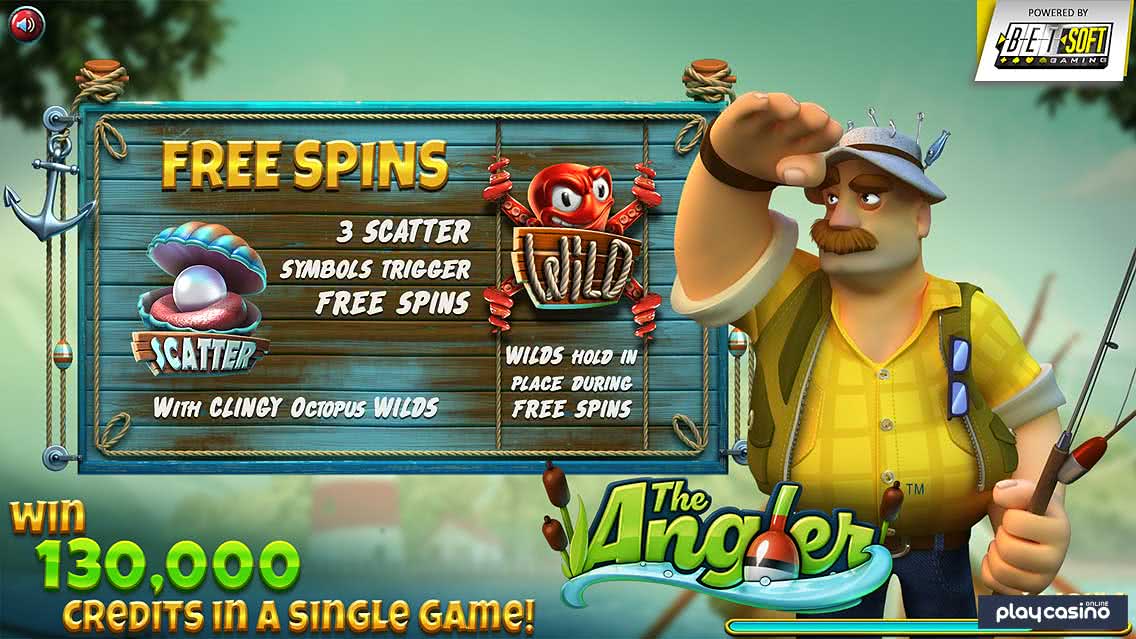 You’ll see oysters with pearls in them on some of the reels, and they are the symbols that will grant you free spins. They appear on the third, fourth and fifth reels only, but three of a kind will give you a set of free spins. What’s awesome about this feature is that you can re-trigger it to get even more free turns.

Additionally, the wild symbols behave differently during this feature. When you get a wild anywhere on the last four reels (because those are the only reels on which they appear), you’ll see that they cling into place by holding on with their eight legs and not letting go. This gives you a sticky wild extra feature in the bonus round, and since you can accumulate multiple wilds in this way until the end of the feature, it’s clear to see that they’ll give you better chances to get multi-line and high-paying winning combinations. 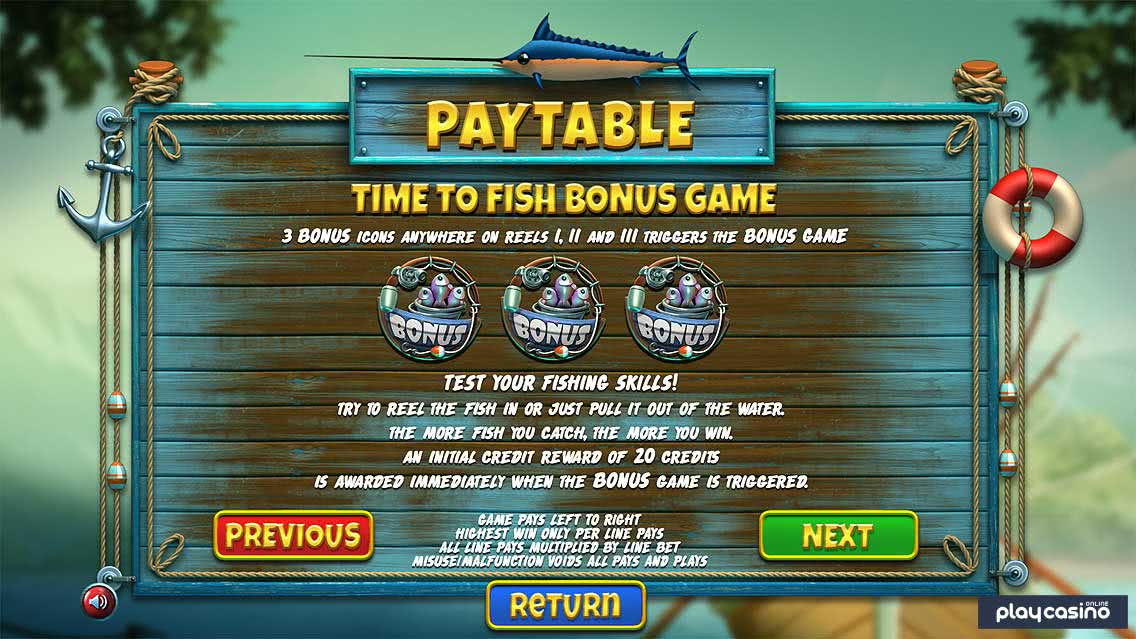 On the first, second and third reels only, you’ll have a chance to pick up buckets full of fish. These are scattered bonus symbols, and getting all three of them on the reels at once will give you a shot at a fishing-based bonus feature. This feature starts by giving you 20 credits as a base reward, and you can earn bigger and better payouts by trying to reel in a big catch. The better you do at the fishing game, the better chances you have of pulling something out of the water that will add some serious weight to your account balance. 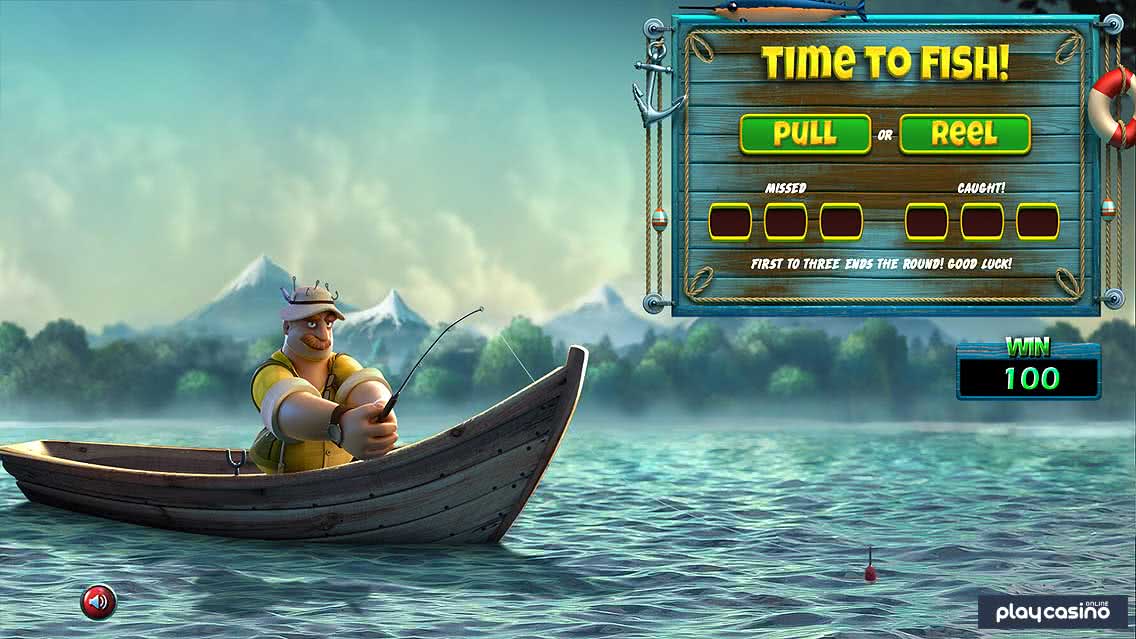 The Angler video slot offers four card rank symbols as the bottom-tier symbols in this game. The green A is up first, and it’ll give you a payout of 75x when you line up five of a kind on an activated payline. Things drop off a little to 50x for five of the red K symbol on a payline. With either the purple Q or yellow J symbols, the win is the same for five on a line with a 25x payout waiting for you for the two lowest-paying symbols in the game.

After any winning spin in the Angler online slot, you can pick the double up button to have a chance to play for double or nothing on your winnings. You have the choice between gambling your entire win or half of it, and you’ll win by guessing correctly when a golden coin is flipped. This coin is fair, so your wager on this has a 100 percent RTP and is a completely even bet with no house advantage. 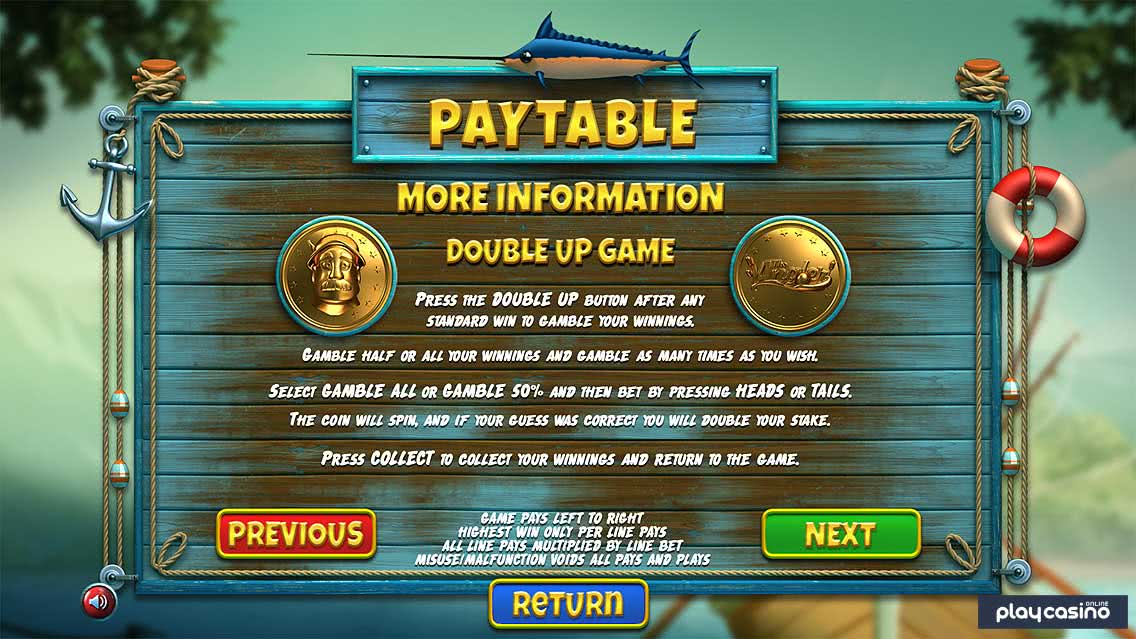 With the Angler online slot, you’re getting a game with a fishing theme that is a bit of a departure from the usual deep sea-themed video slots. Instead, you’re dealing with what’s going on above the water, and that helps to put a different spin on the experience. Between the two different bonus features, each of which ties in the fishing theme, and the great look and feel, we aren’t surprised that so many players have fallen in love with this game and the relaxing experience it provides them.