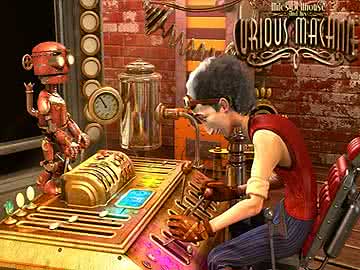 The Curious Machine video slot by BetSoft is a 30-payline title that is about a futuristic inventor in somewhat of a steampunk environment who invents a time machine. He helps you to win with multipliers, free spins, rotating symbols and other ways to get paid.

One of the most important concepts that we’ve not been able to master as human beings is time travel, and The Curious Machine online slot is BetSoft’s attempt to bring this into reality as the concept of a slot. It centers around a fictional inventor Miles Bellhouse  and his giant time machine. You’ll have to fight off a general who is trying to see what you’re up to while you get a number of ways to get paid in this medium-volatility game. It’s packed with features and gives players plenty of things that help to give this title a fair amount of replay value.

Format and Layout of The Curious Machine Slot

Speaking historically, BetSoft probably has more 30-payline games than any other provider, and that’s the case here as well since this title uses five vertical reels, three horizontal rows and 30 total paylines. These paylines go from left to right only, which is normal, and you will be able to adjust the number of active lines. What you need to understand, however, is that dropping this down below the maximum is not advisable. This is because it will decrease the return to player percentage, which in turn makes it more difficult to win over the time of your total session. 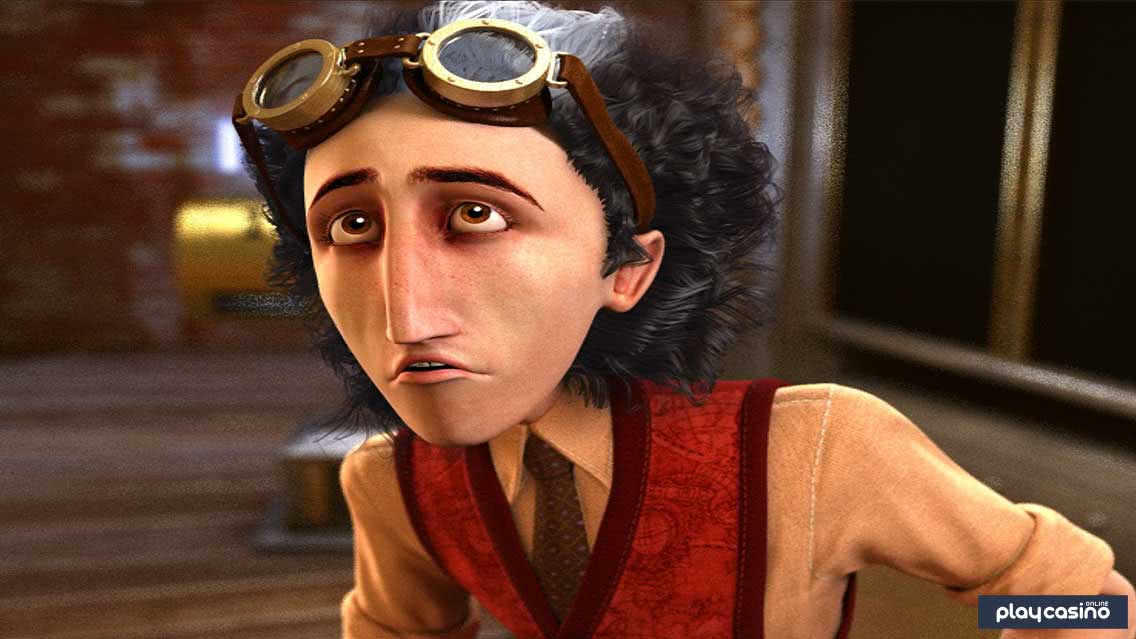 At the bottom of the screen, you’ll see options to change the number of coins wagered on each payline, and you’ll also see a dial that allows you to pick out which size coin you want to use. The coins themselves can be set from $0.01 to $1 each, and you can wager up to five coins on each of the 30 paylines. This gives you a total range of available bets that go from $0.30 at the minimum to $150 at the maximum, making it easy for players to find a bet size that fits what they are comfortable with. 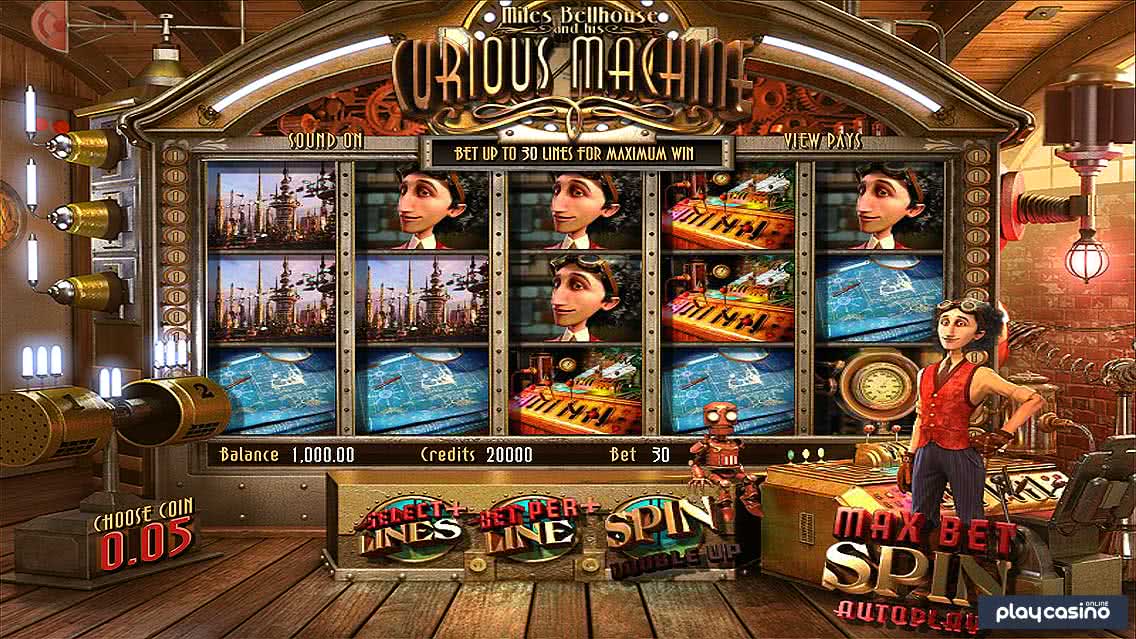 On the second and fourth reels, you can get the vortex symbol. It’s a wild symbol in The Curious Machine online slot, and since there aren’t wilds on every reel, they can’t give you specific wild payouts. With that having been said, there is a feature associated with this symbol that can make it easier to get some extra payouts that you would have missed out on without it, and it’s an important part of the gameplay outside of the other bonus features.

Before your wins are calculated for a given spin, the vortex symbol can cause the symbols around it to rotate to give you better wins. If you just get one vortex on the reels, it can also shift itself over to the third reel if that will help you out the most in terms of your total payout. However, if you get both of them on the reels at once, neither will ever shift to the middle reel. Instead, the vortex on the fourth reel will activate first, and this will be followed by the vortex on the second reel to give you improved chances at some pretty substantial wins. 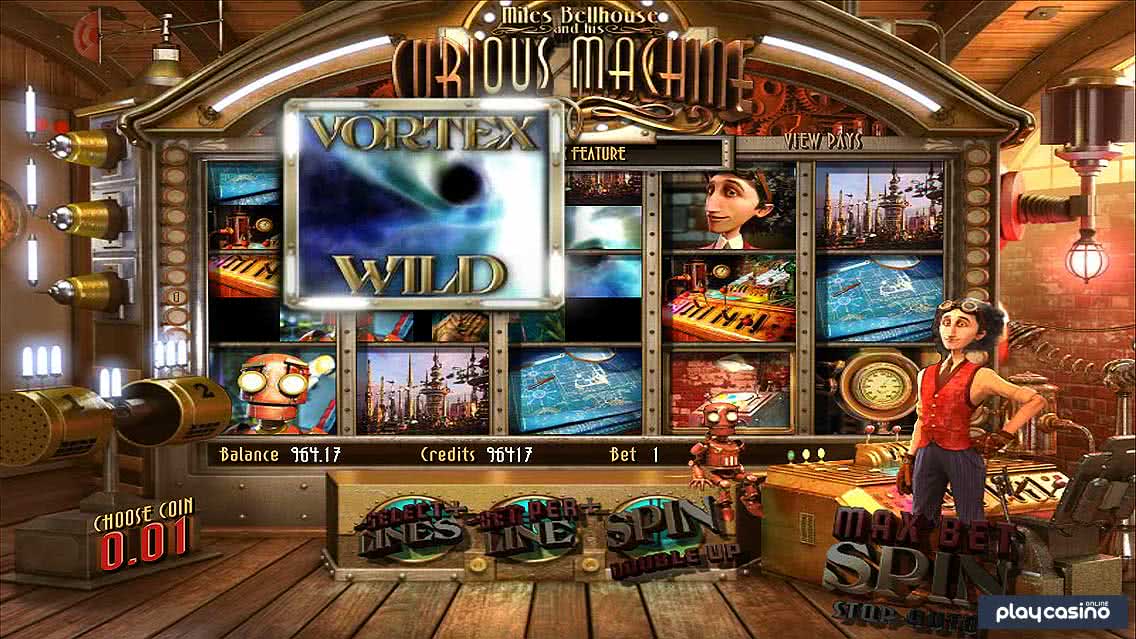 Second Chance Feature for Five of a Kind Wins

The Curious Machine video slot also has a second chance feature that we’ve never seen before in any other game. The way this works is that you can get a free chance to nail some wins with a single-reel re-spin whenever you have a spin with no wins whatsoever. If you have a chance to get a five-of-a-kind combination of any particular symbol, then you’ll be able to trigger this feature. It essentially gives you an opportunity to pick up a major payout, but because it’s just a re-spin of one reel, it can also give you chances at smaller wins as well just depending on how the symbols fall on the screen. 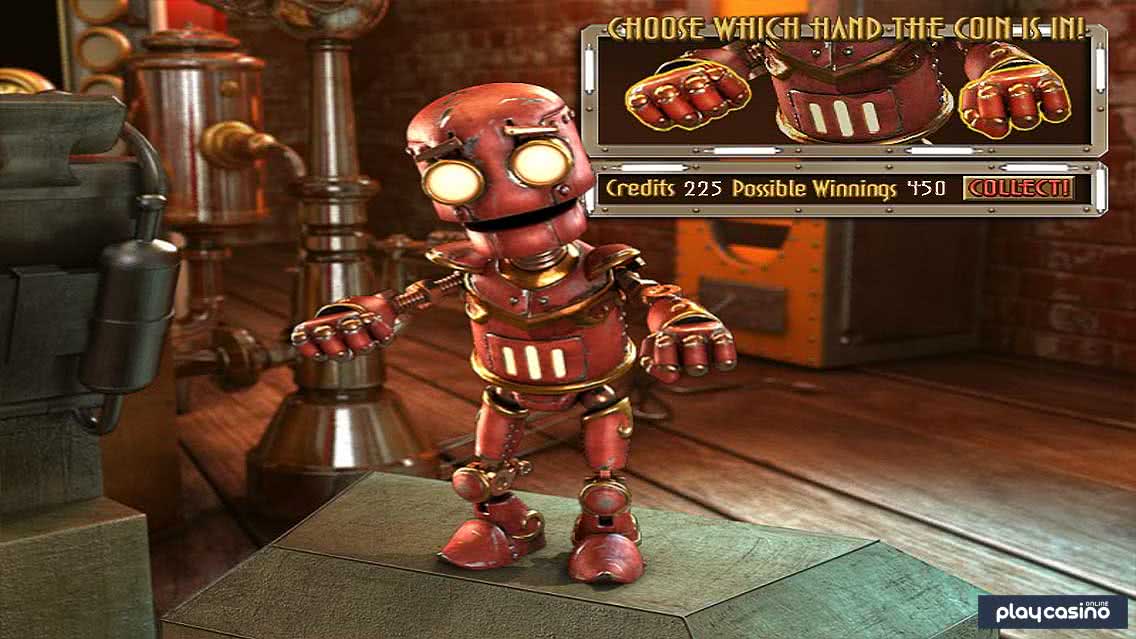 Blast to the Past Free Spins Mode

There’s a dinosaur symbol that can show up on the first, third and fifth reels. If you’re able to pick up all three at the same time, then you will activate a free spins bonus round. The number of free turns you get is somewhat random, but you’ll be given a random multiplier on every single spin that’s worth up to 5x. This means up to five times the normal values of all of your payouts except for the bonus feature that we’re going to detail below. You can also re-trigger this feature to add more free spins on, and that means you could extend this bonus round to last quite a while. 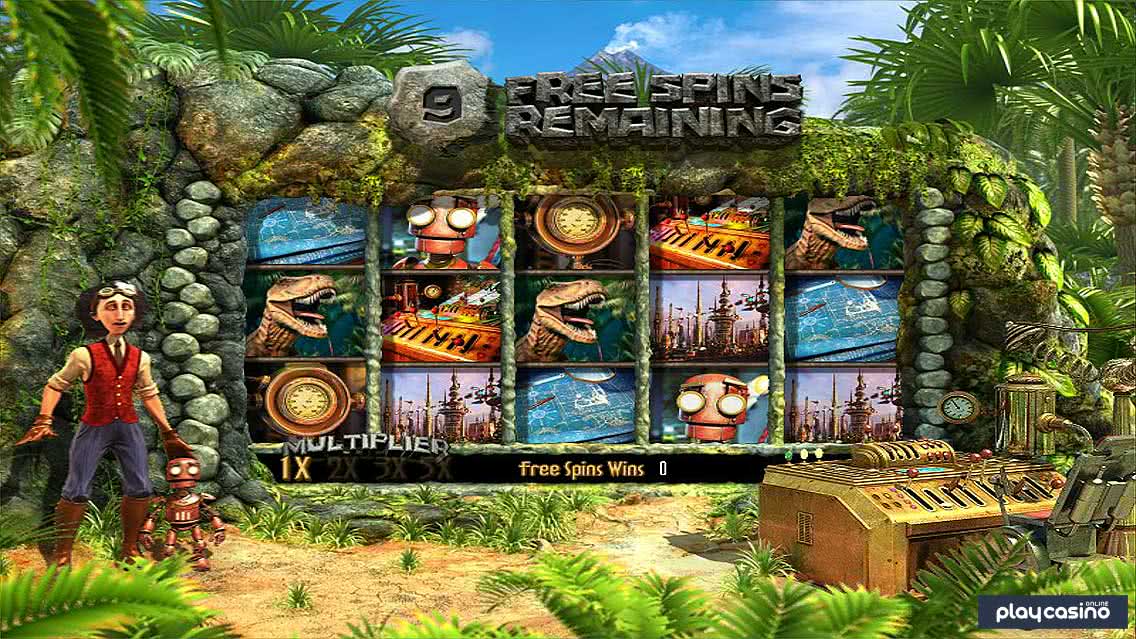 Travel Through Time Bonus Round

The symbol of the time machine’s controls themselves, and you can find them on the second, third and fourth reels. This symbol is so important in The Curious Machine online slot because it triggers the Travel Through Time bonus round. You can tell just by the name of this feature that it ties into the overall concept very well, and the basic idea is pretty straightforward. You will travel through time to get away from the general, and you’ll have opportunities to pick up some instant wins along the way. 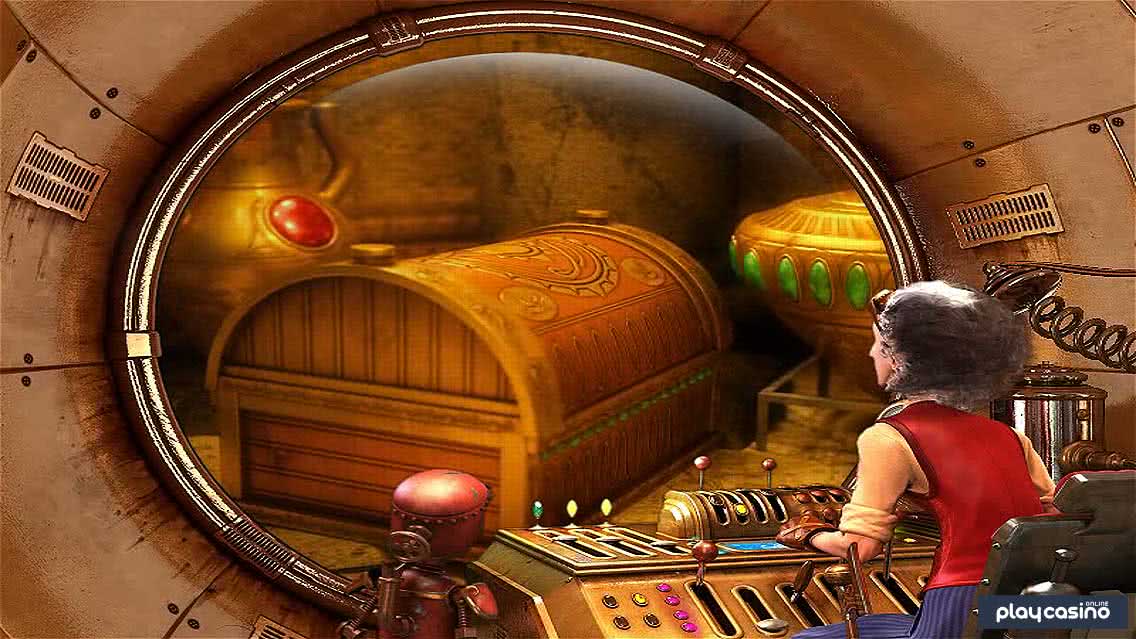 Miles the inventor is the top-paying symbol, and picking up five of him on an activated payline is worth 1,500x, which is a pretty subtantial prize. This is especially the case considering that you can get extra chances to hit this combination in addition to multipliers in the free spins mode. The robot helper earns you 600x for five of a kind, and you’ll have a chance to earn 600x for five of the general as well.

The controls symbol with lots of levers and knobs gets you 300x, and the same 300x prize is yours for five of the pressure dial. Finally, a 150x payout is yours if you get five of the futuristic city feature or five of the blueprints. 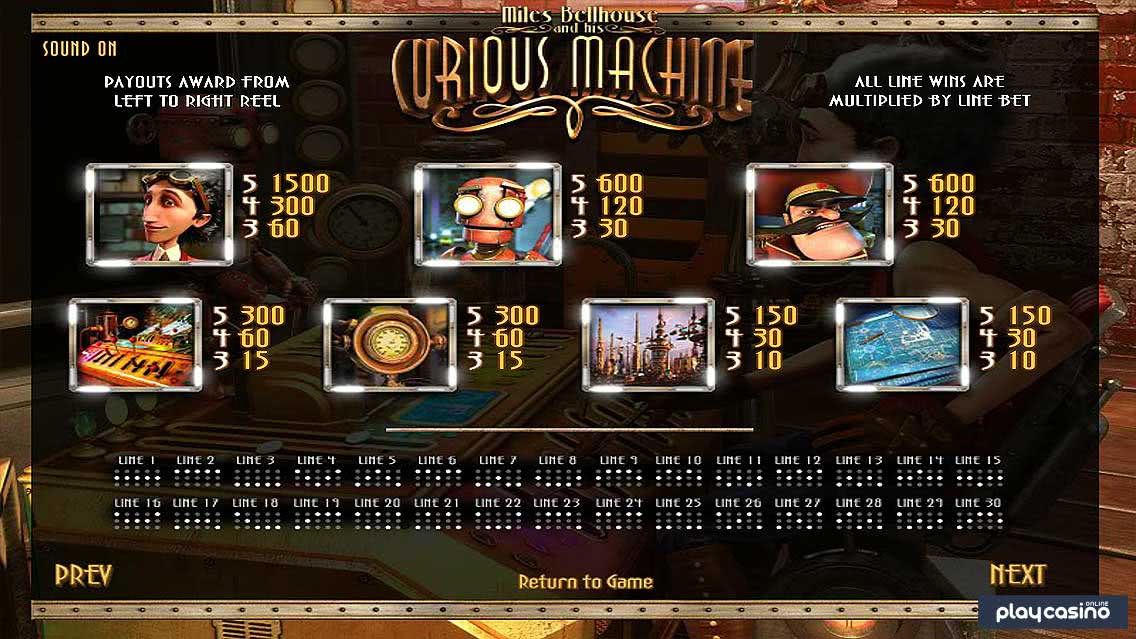 What you’ll find with The Curious Machine video slot is that it gives players a good mix between a feature-based style of gameplay and a balanced pay table. Neither are particularly overwhelming even though both are solid in this title. The graphics are excellent as well, which you’d expect from a title that’s a part of BetSoft’s Slots3 line of 3D slots. Overall, what we like the most about this game is the vortex wild feature and the second chance to get five-of-a-kind wins because those can translate to some serious value by essentially rearranging the symbols on the game board, which is the type of thing that a lot of players wish they could do sometimes.