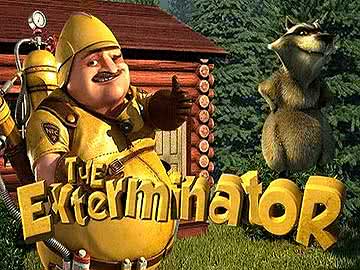 The Exterminator video slot by BetSoft is all about an exterminator who goes out to try to get rid of a bunch of pests in a cabin that consists of 30 paylines and that offers players sticky wins, free spins, wild reels and other features.

When you live in a cabin out in the middle of the woods, there are a lot of animals that are always trying to get into everything that might taste good. Keeping this from happening is the idea behind the Exterminator online slot, a game that’s a part of the Slots3 line from BetSoft. It’s a tremendous title with awesome graphics and some hilarious characters like the exterminator himself and a cunning and cute raccoon who is always trying to make a mess. The two square off while you get to take advantage of the conflict by way of lots of payouts and features that give you extra wins.

Play The Exterminator Slot for Free

Format and Layout of the Exterminator Slot

This game is designed so that you have enough room on the reels for the features to work out well and for there to be enough paylines that things stay exciting without being overwhelming. We think this was achieved pretty well with five reels, three rows and 30 paylines. The lines are variable, which means you can select to play with less than 30. We strongly suggest you keep it at the maximum, however, because that’s what will maximize the RTP for you in this game, and that means better opportunities to win. 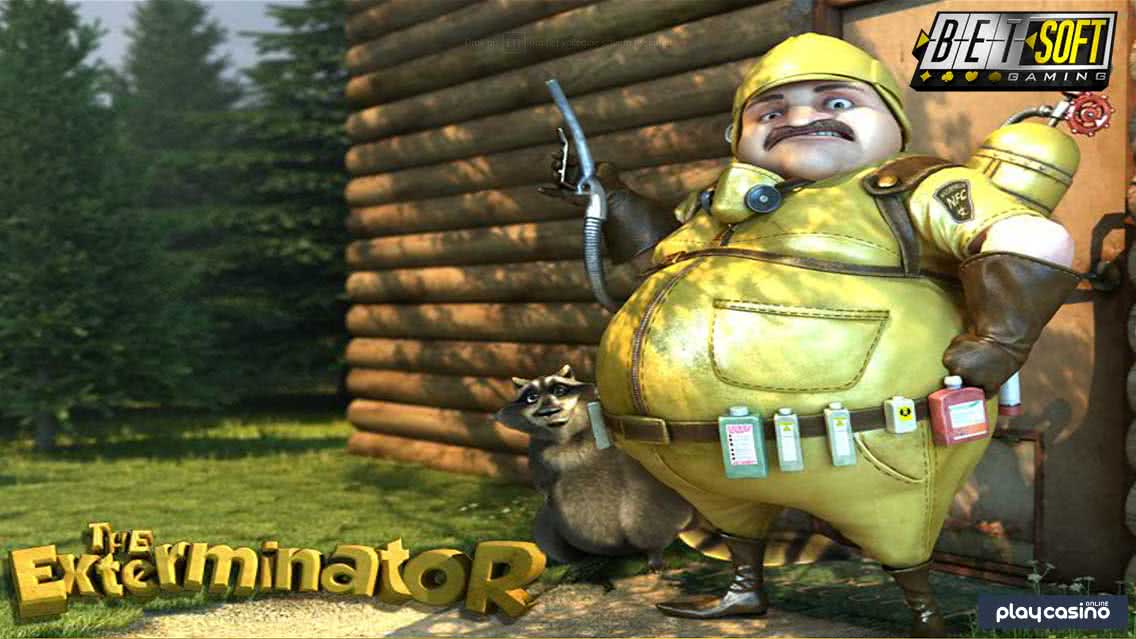 There are two main ways to adjust how much you’re betting on each spin in this slot. The first way is to just change how many coins are being bet on each of those lines. With all paylines activated, this range goes from one per line to five per line. The second way is to change how much the individual coins are worth. The minimum for this value is $0.01, which lends itself to a $0.30 minimum bet size overall. However, you can also ramp it up to the $1 level, and combined with five coins per spin, that means the betting tops out at $150 per spin. 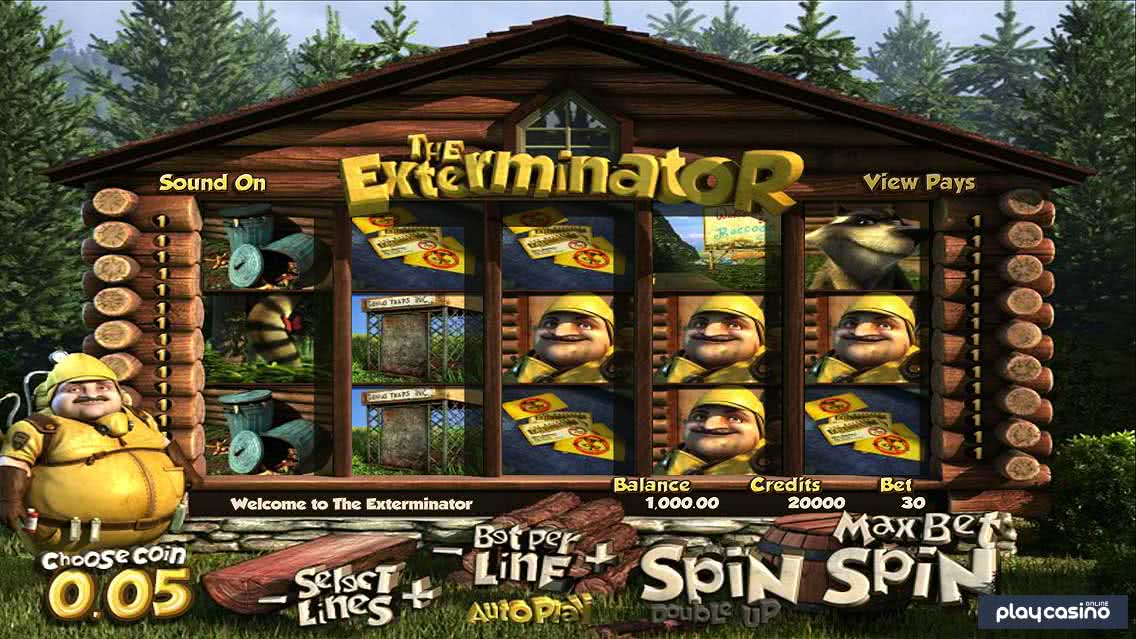 The feature that you’ll probably see the most of in the Exterminator video slot is the sticky win feature. The way this works is that, when players get winning combinations on the reels, those symbols that make up the combinations stay in place while the rest of the reels spin again. If you get at least three of the scatters, you’ll trigger this feature as well for a chance to add more on to the winning combination. The more additional symbols you get to extend the combinations, the more re-spins you get. It finally stops whenever you have a re-spin with no additional wins.

It’s important to note that this feature does not happen during the free spins bonus round. 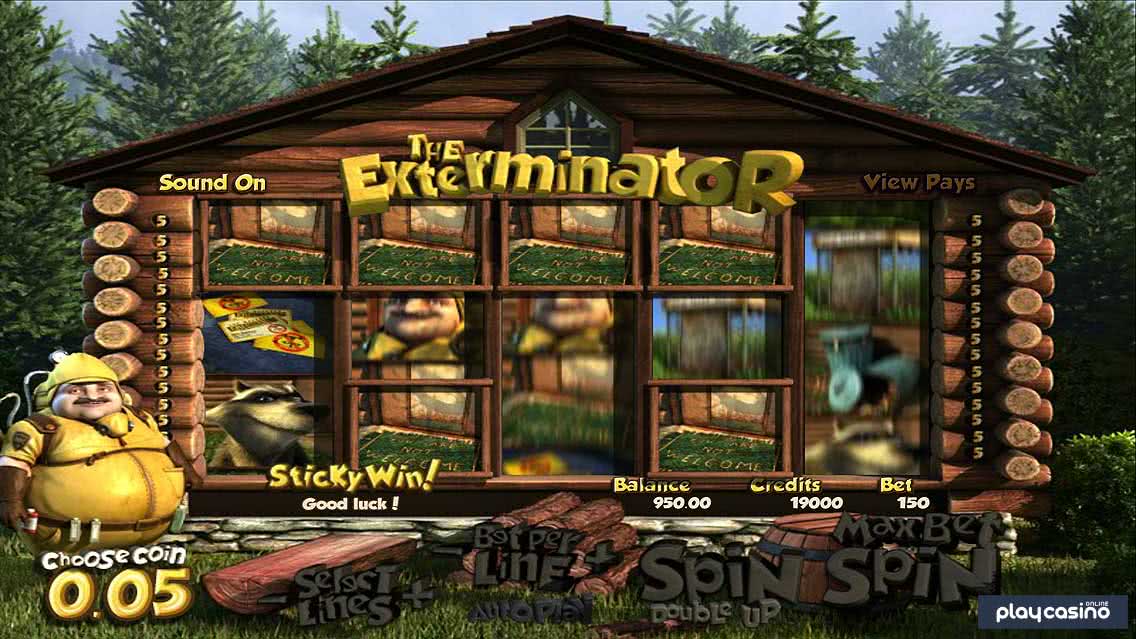 The exterminator’s truck is the symbol that triggers the wild reel feature. When you get this during a sticky win, it’ll stay on the screen with all of the other sticky symbols until no new symbols are added. Once you’re at that point, it then expands to cover the whole reel that it’s on, which turns the whole reel wild. This symbol only shows up on the fourth reel, but it makes it much easier to extend your three-of-a-kind wins to something larger while also making it more likely that you will hit multi-line wins as well. On top of that, it will fill in for five-of-a-kind combinations that were only missing a symbol on the fourth reel, so there’s a lot of the Exterminator online slot’s value tied up in this one feature. 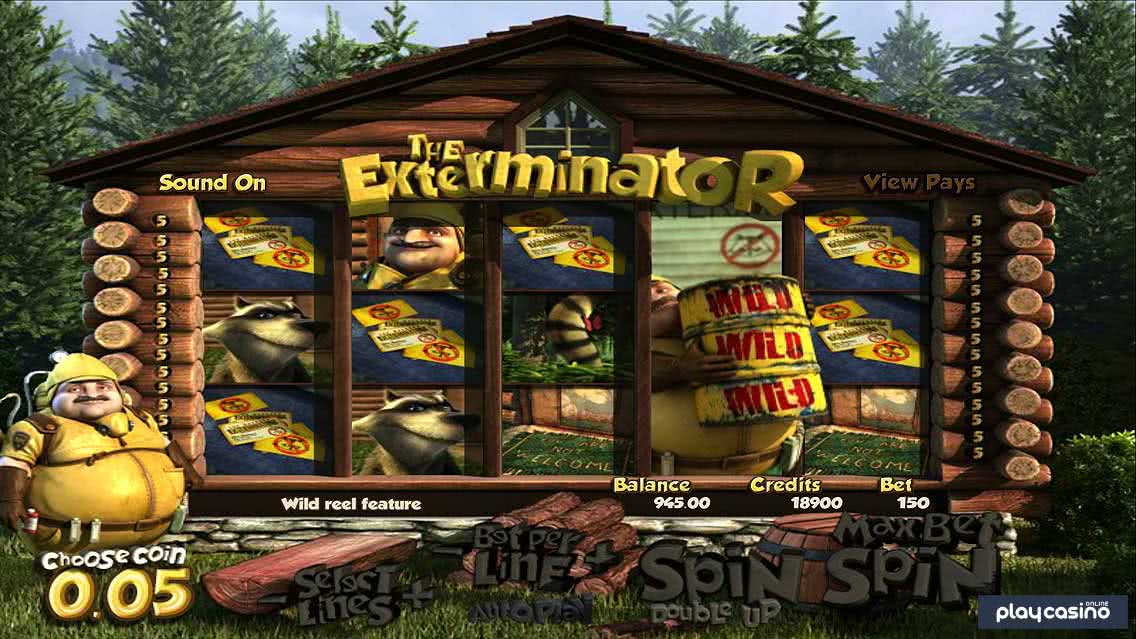 There’s a free spins bonus round available in the Exterminator video slot as well. It’s triggered when a mnimum of five footprints symbols show up on the reels at the same time. This mode is all about chasing the raccoon around the cabin. You’ll get multipliers at random worth up to 5x for your winnings on each individual spin. It’s worth noting that the blueprint, footprints and truck symbols do not show up during the free spins, and you also do not get the sticky win re-spin feature. It’s pure extra value for a number of free spins with your payouts multiplied by a factor of up to five. 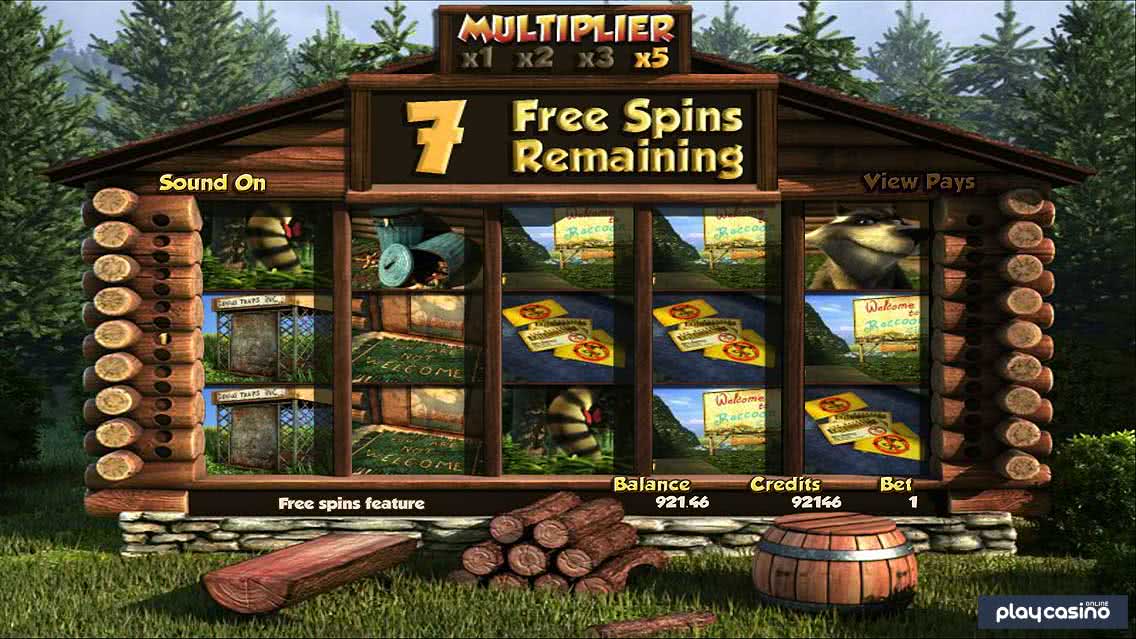 A final bonus round can be had for a minimum of five of the blueprint symbol anywhere on the game board. When this happens, you’re taken to a second screen where you have a number of places to choose from where you think the raccoon might be hiding. If you pick correctly, then you’ll get a pretty serious payout. However, if you miss, then you will still get a consolation prize, so it’s really a win-win situation overall. It’s also a really fun feature that plays perfectly into the theme of the game. 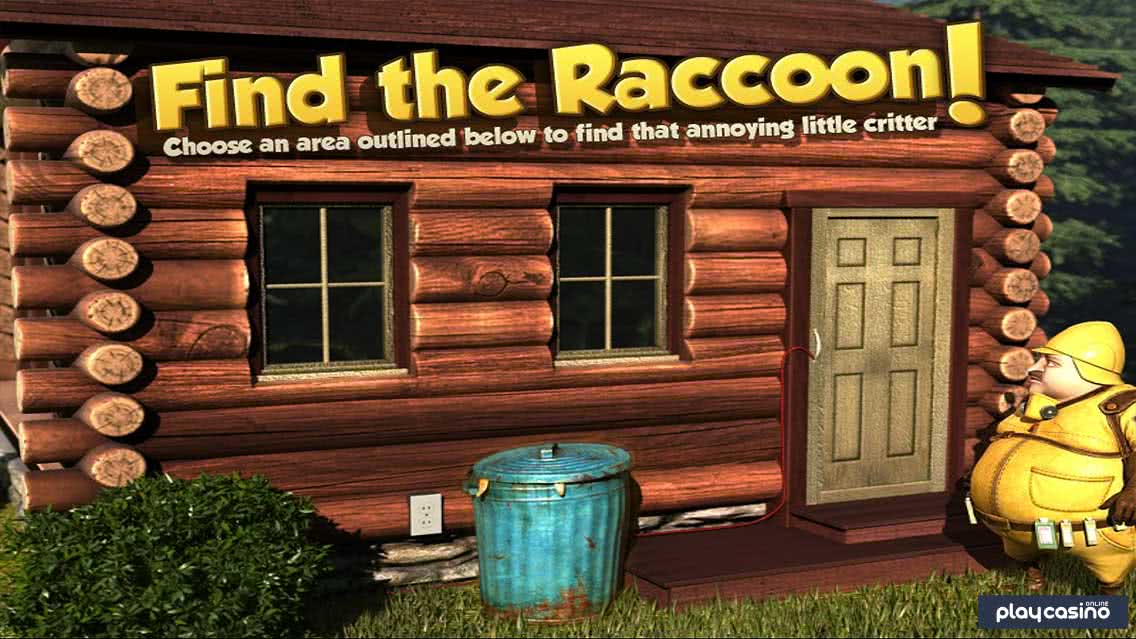 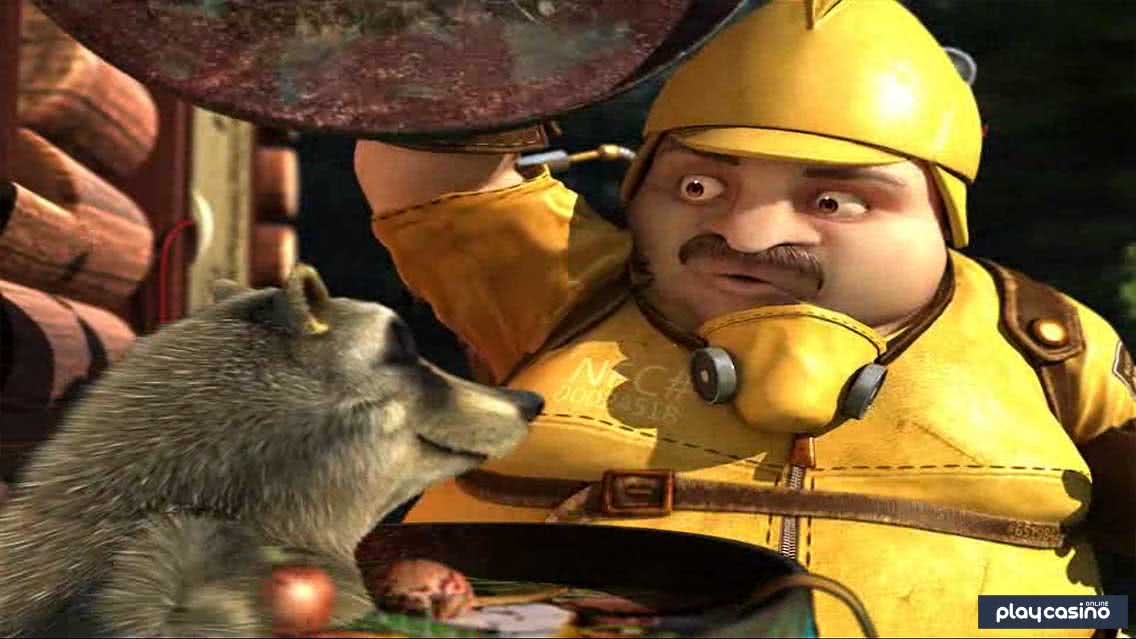 Rounding out the bottom of the pay table are five other symbols with lower payouts. A 75x prize is yours for five of the trap that’s been set out for the raccoon. You can also get 50x for five of the raccoon’s tail, and five of the city sign or the tickets laying on the ground will pay out 25x each. Finally, the lowest win available is for five of the not welcome mat, and those will get you 15x for five. 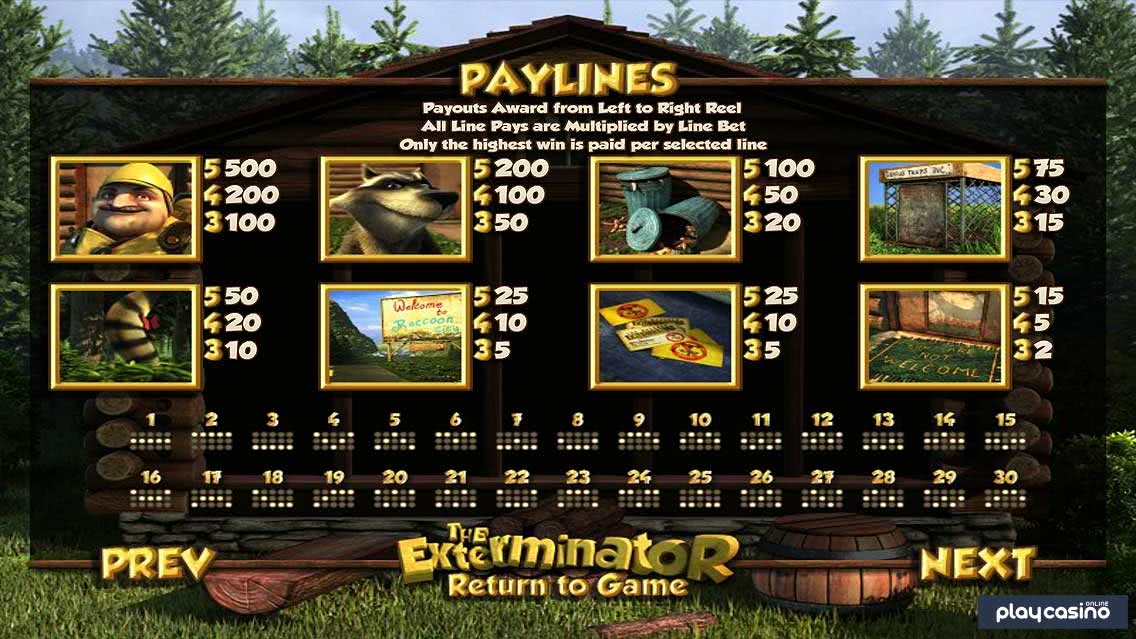 There’s a lot to love about the Exterminator video slot by BetSoft. They’ve done an awesome job with virtually everything you can imagine in this game, and something that we want to point out in particular is that they have tied the theme of the game with the man chasing the raccoon in more than one of the features. This helps to create a very cohesive overall experience that’s the type of thing that players tend to get a lot of replay value out of.