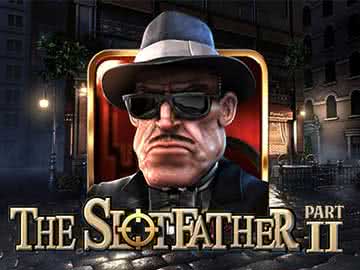 The SlotFather Part II slot by BetSoft is a sequel to the original, and it has been designed to have even more action and even more features. You’ll find yourself able to get plenty of gangsters on the reels with top-notch 3D graphics and lots of ways to collect.

BetSoft’s The SlotFather Part II online slot is a great example of a company putting together their own franchise that has multiple parts, all of which are excellent. As the sequel to the original The SlotFather, this title is a step up in many ways, particularly in the amount of action on the reels. The graphics are extremely high-quality with lots of 3D characters that look amazing, and it’s up there in visual appeal with any other title you could mention. With a medium volatility and a feature-rich gameplay style, this is a solid option for players who like action without ridiculously large swings.

Format of The SlotFather 2 Slot

For the second edition in this series, BetSoft decided to go with a 243-ways format game. You’ll find five reels and three rows of symbols in front of an old-style city backdrop, and the SlotFather himself is sitting in a convertable, holding a machine gun and looking cool. This format makes all of the regular-paying symbols give you wins on reels from left to right no matter where they fall on the reels, so they function much like left-to-right scatter-style symbols.

The base bet for this game is 25 coins. You can multiply that by up to a factor of five to wager 50, 75, 100 or 125 per spin as well. On top of that, you’ll have a variety of coin sizes to pick from, and that starts at the low $0.01 level for a $0.25 minimum bet size. Since the coins go up to the $1 level, you can also wager as high as $125 per turn. Both high rollers and penny players will have no issue with finding bet sizes that work for them with this large of a spread, which is a very inclusive approach to betting with a lot of options for size customization. 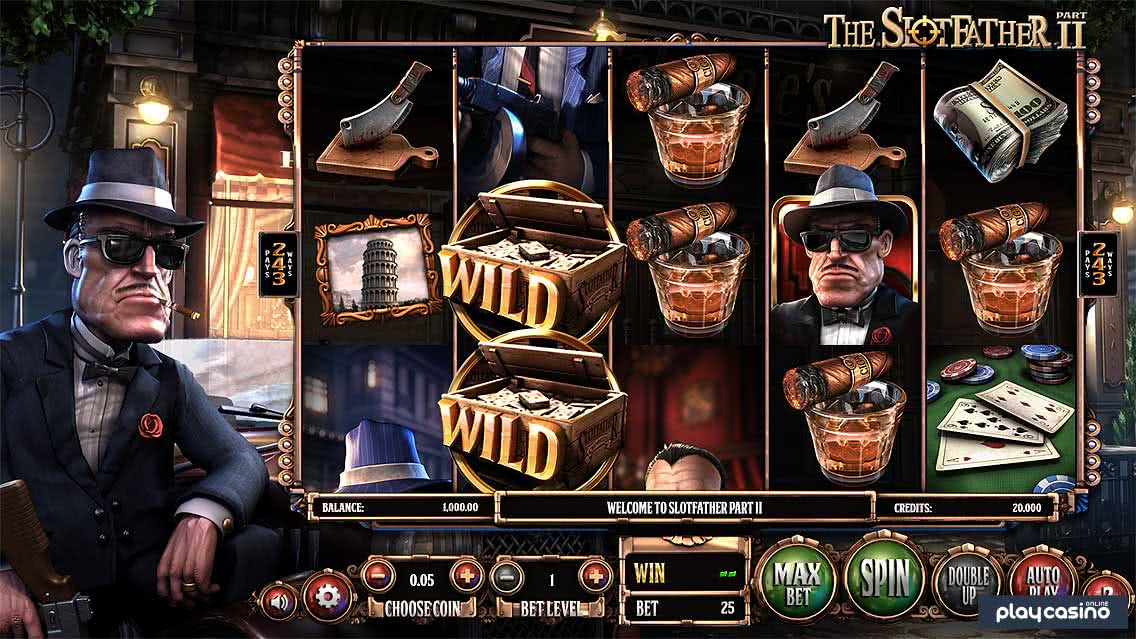 The crate symbol is a wild in this game, and it’s full of cash, weapons and other goodies that you’d want to hide from the cops. During the regular play, it will appear on the second and fourth reels only. However, it will also appear on the third and fifth reels during the bonus feature. It substitutes for every symbol in the entire game except for the truck symbol, so it can help to get a lot of extra wins, especially with the 243-ways format being used. 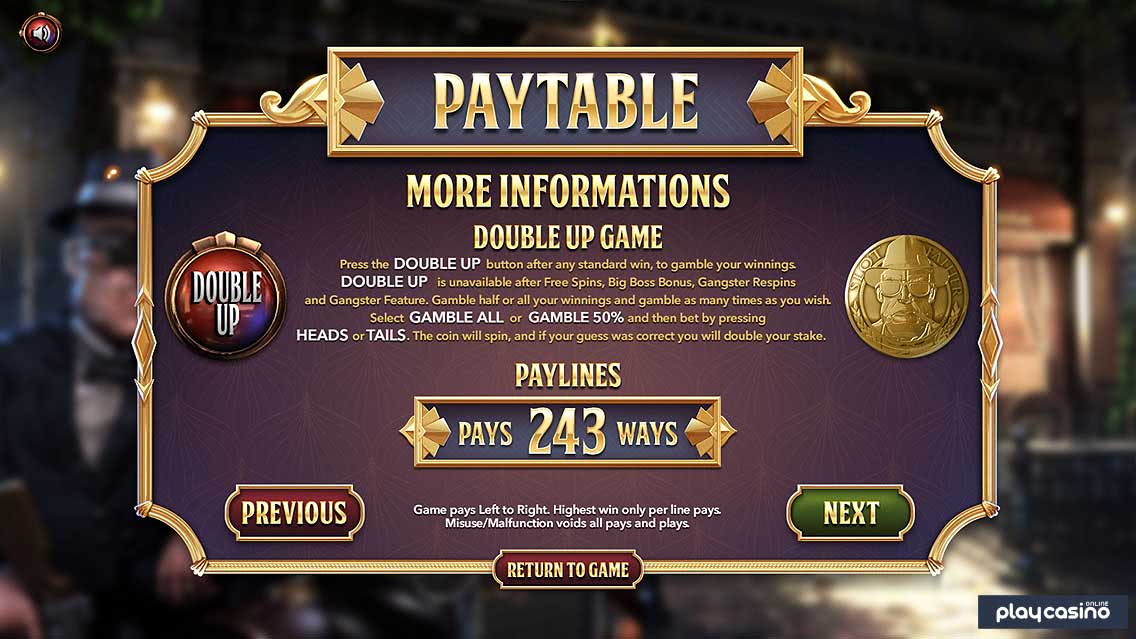 The scatter symbol in The SlotFather Part II video slot is the scatter because you never know when they’re coming or what they’re going to hold. Two of a kind or more located anywhere on the game board is worth a payout here, and they’re the only symbol that pays without having to be on left-to-right reels.

Two of a kind will earn you 50x, and three will kick that up to the 75x level. You can also pick up 125x for four of a kind, and a five-of-a-kind combination of these scattered trucks will be worth 250x to players.

While you only need two or more trucks for a payout, you’ll need at least three for a set of free spins. Three of the trucks earn eight free spins, and four will get you 12. A total of 20 free spins is yours for five of the truck symbols anywhere on the game board. During these free spins, all of your wins (both normal and scatter) are given a 2x multiplier, and you have the ability to add more free spins with three or more trucks. 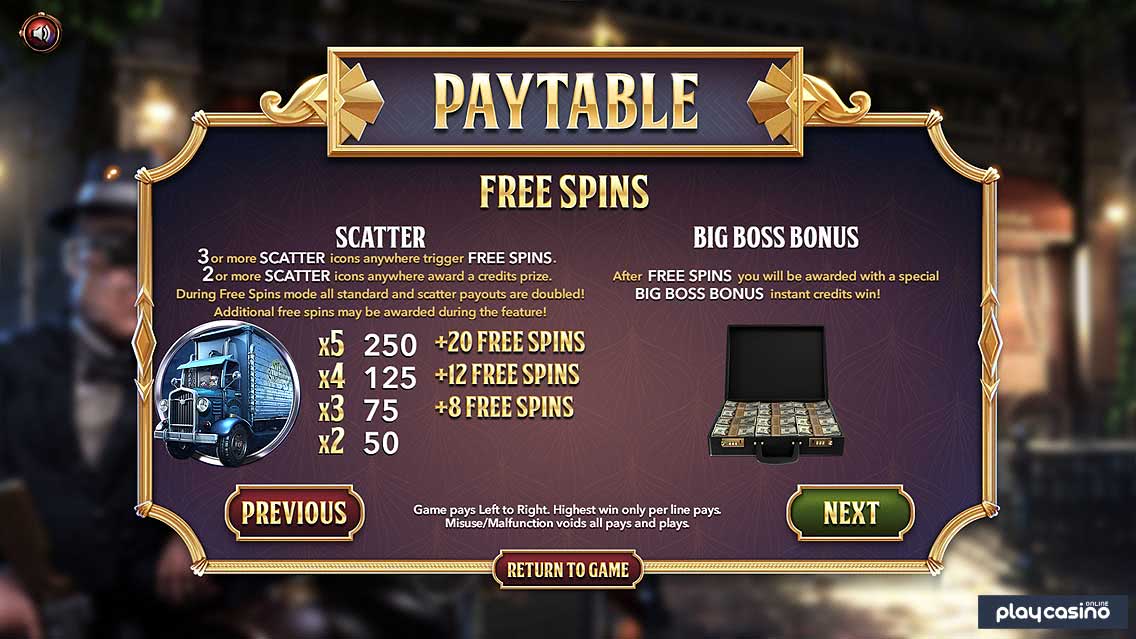 There are three different gangster symbols other than The SlotFather in this particular game. The red is Snake Eyes Sammy, the blue is Frankie aka Knuckles, and the green is Fat Tony. Each of these appears stacked in sets of three, and they all have the same payouts: Five of a kind gets 35x, four is worth 20x and three gets you 5x.

However, if you get two of them matching on the game board completely covering their reels, then you’ll trigger the Gangster Respins feature. This feature will have the other reels spin again to give you more opportunities to take down gangster symbol payouts. This is a neat feature that adds some variety and extra value. 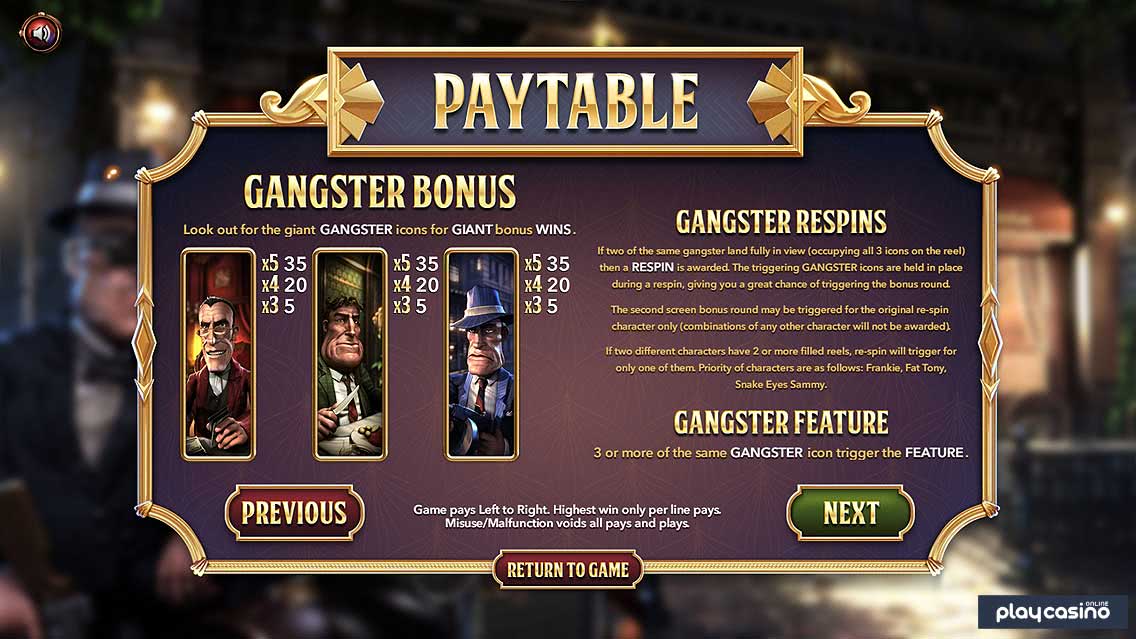 If at any point, during a respin or not, you get three or more of the same gangster completely on the reels, you’ll be taken to the Gangster Feature. Thi sis essentially a pick-a-box style game where you’ll pick from six businesses to collect extortion money from. You’ll have a different level of volatility for each of the three gangsters, but the win is essentially random. 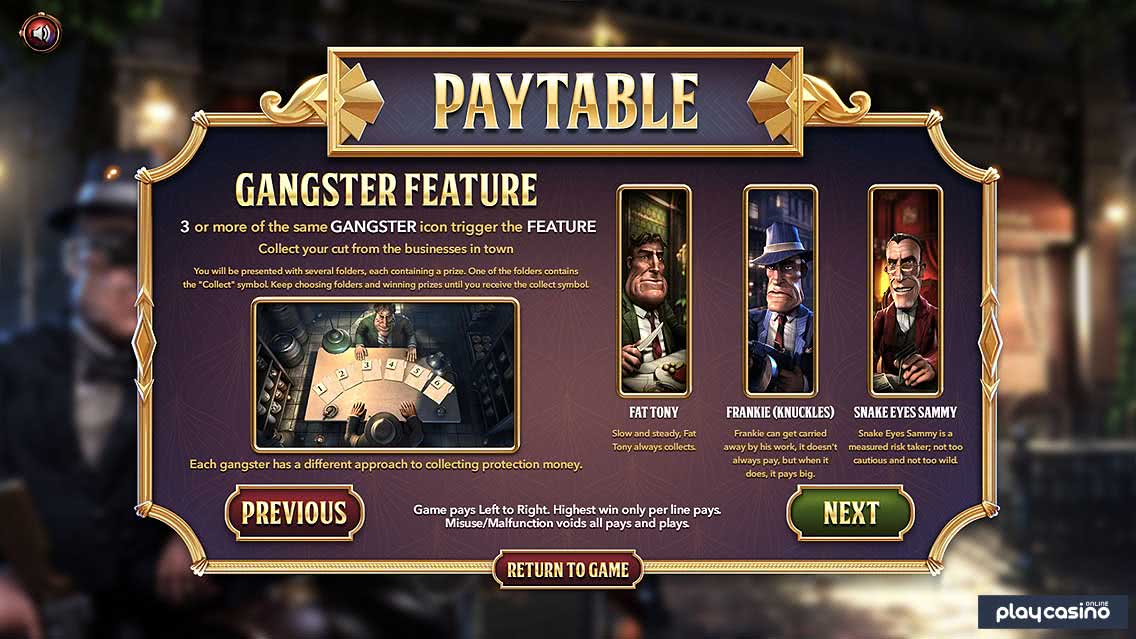 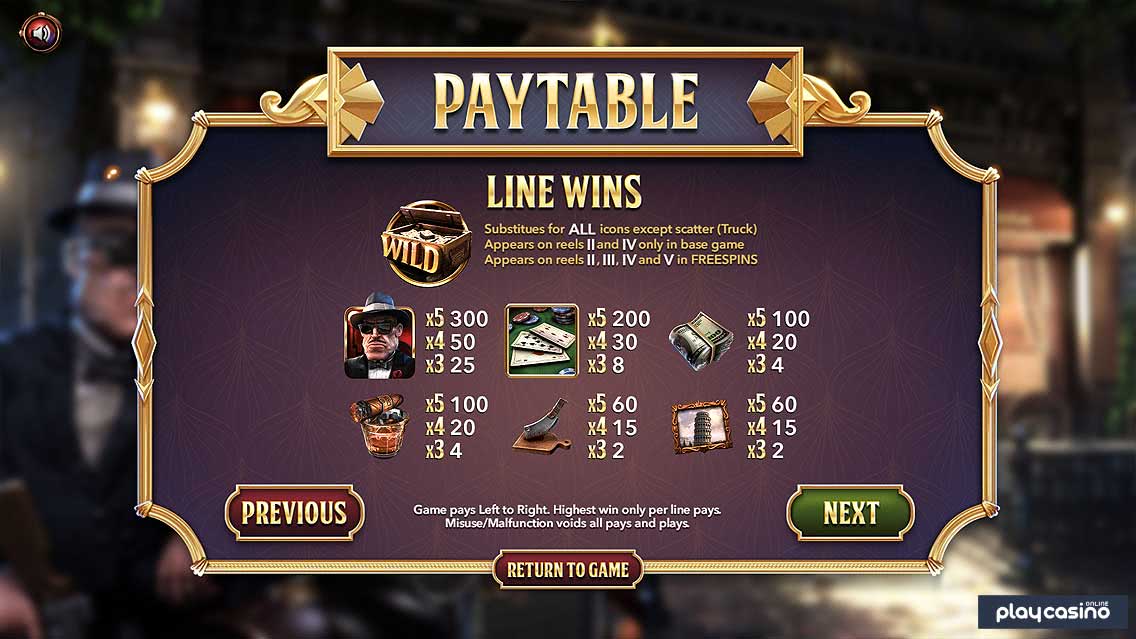 Despite the action that people associate with crime-centric stories, The SlotFather Part II video slot by BetSoft actually gives players pretty smooth sailing when it comes to the overall up and down swings, and that’s because it only has a medium volatility overall. The basic idea here is that the regular gameplay gives you a pretty solid hit-rate and balanced play while the features give you a bit more volatility and ways to win some bigger payouts.

It’s a formula that has worked for them before in a variety of other games, and it’s an approach that works really well in this game. That’s because it balances the different aspects of the game in a very smart way, and that’s exactly the type of thing that keeps players interested in playing a game like this in the long run.