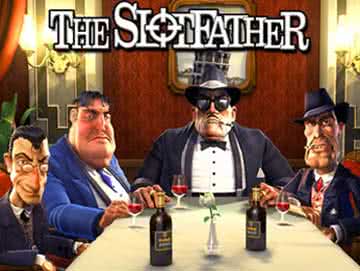 The Slotfather slot by BetSoft is based on a funny rendition of the Godfather films with 30 paylines.

The Godfather is one of the most important and most popular film franchises of all time. While there may be debate around if the third film should have ever happened, what you can’t deny is how much of an influence it had on the industry as a whole. The Slotfather online slot by BetSoft takes advantage of this type of mafia/true crime-style theme with excellent 3D graphics and gameplay driven by a plethora of features. There are just a ton of ways to win in this game, and it has a high hit-rate as well.

Play The Slotfather Slot for Free

Format and Layout of The Slotfather Slot

This video slot has five reels, three rows and 30 paylines. This is a very popular format that BetSoft likes to use, and they probably have more of a focus on 30-payline titles than anyone else for whatever reason. Betting in this game is set up in a pretty intuitive way with the ability to bet as many as five coins on each of those paylines. The coins themselves start at $0.02 and go up to $1 apiece, which puts the minimum bet at $0.60 per spin and the maximum at $150.

Players have the ability to play with anywhere from one to 30 paylines per spin in this slot. However, we very strongly recommend against playing with fewer than the maximum of 30. Doing so will lower your return to player percentage by a significant amount. If you need to play with a smaller bet size, then do so by changing the sizes of the coins and the number of coins per payline instead of adjusting the number of paylines activated to keep your payouts as high as possible in the long run. 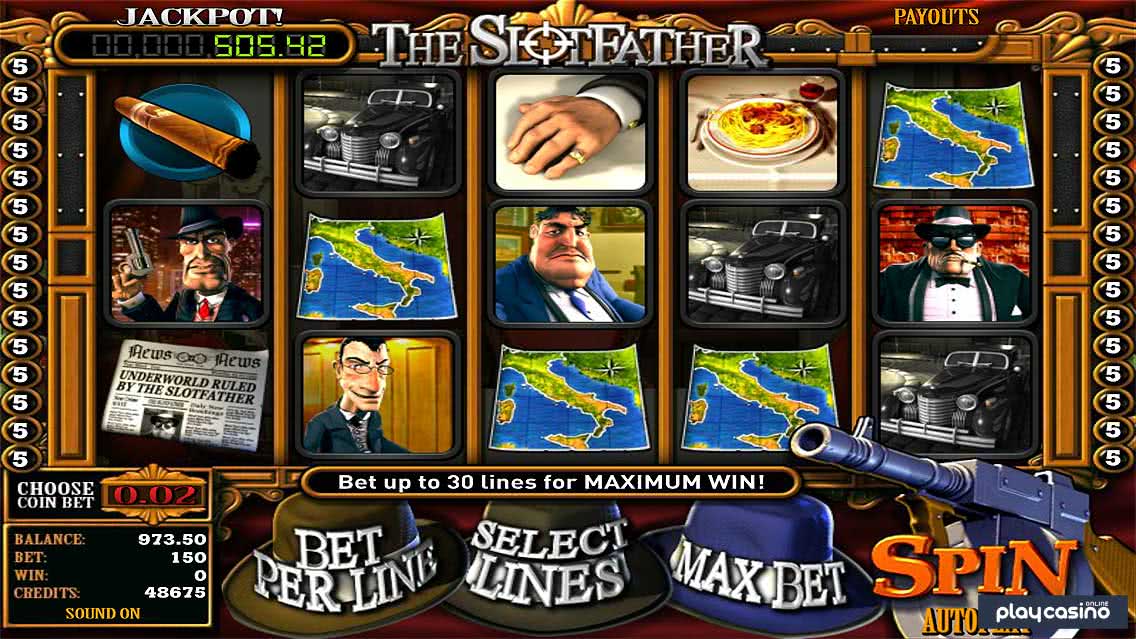 Sneeky the gangster has a long face and round glasses, and he’s responsible for a quick and simple instant win feature. If he shows up on the immediate left or right of the suitcase full of cash on one of the first three reels, then he will reach across to grab a handful. When he does, you are rewarded with a randomly determined instant win. This is a pretty easy way to get a quick payout, and it fits perfectly with the theme of the game as a whole. 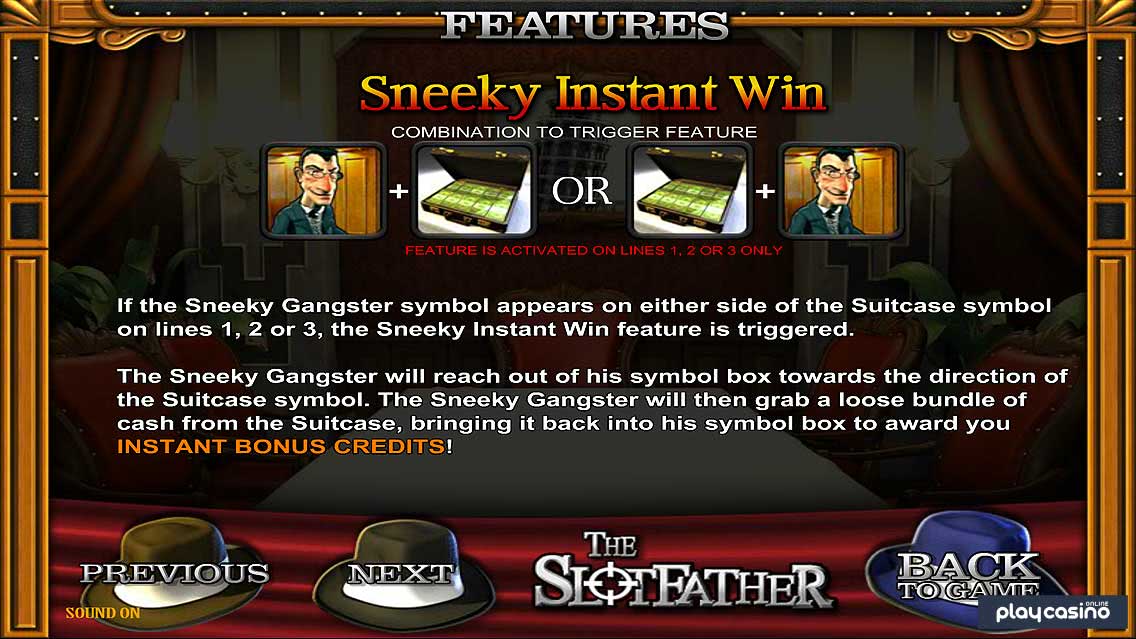 The old gangster symbol is the man in the hat holding a pistol up in the air, and he helps you to get a free spins bonus feature in The Slotfather online slot. If you get him to land directly to the left or right of a Tommy Gun symbol in this game, then you will trigger the Multiplier Mob Free Spins feature.

The way this works is that, when the feature activates, the old gangster will reach over and grab the Tommy Gun. Bullet holes are then shot across the main screen, and you’ll pick one of them to be given your number of free spins and the size of your multiplier for the bonus round. You can win anywhere from three to 10 free spins for this feature, and your multiplier will run from 1x to 3x for all of your payouts during those free turns. In addition, players are also given a 30-coin instant payout. 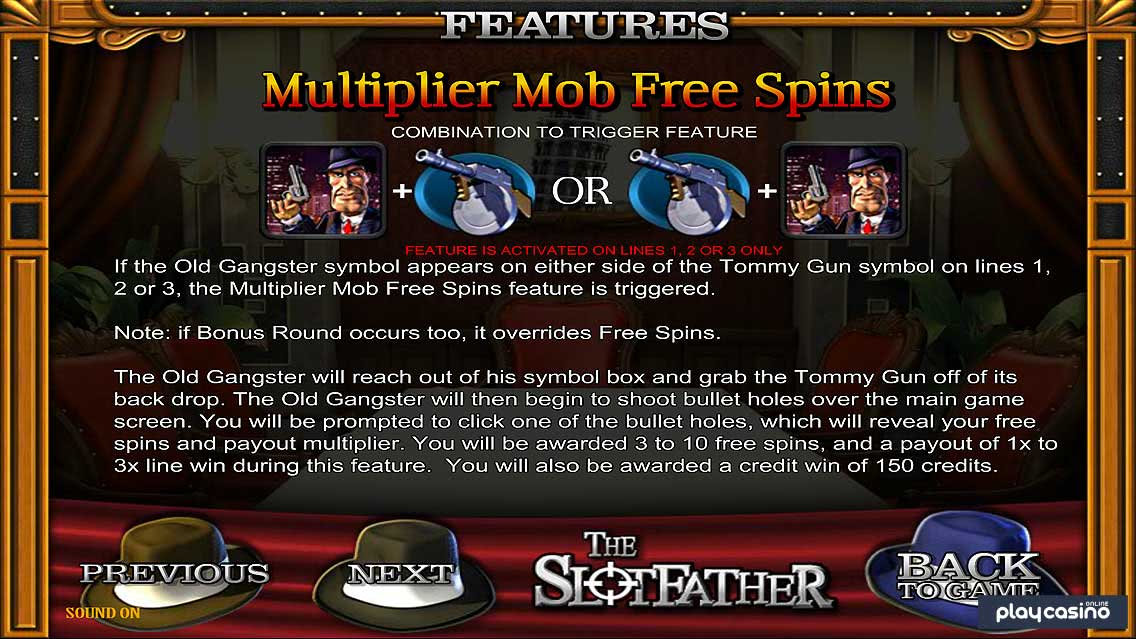 The Underboss symbol is a man in a blue jacket giving a grim look towards the player while sitting down. He acts as a bonus symbol in this game to trigger a different type of scatter feature than players have maybe ever seen before. When you get three or more on any locations on the reels, then every single symbol on the reels becomes a scatter. This makes it easy to get a lot of small and medium payouts on the reels at the same time, and it also makes it easier to hit five-of-a-kind wins as well.

This Underboss also becomes a paying scatter himself for three of a kind or more. Three gets players a 60x win, four pays 120x, and five will earn you a solid 300x payout. 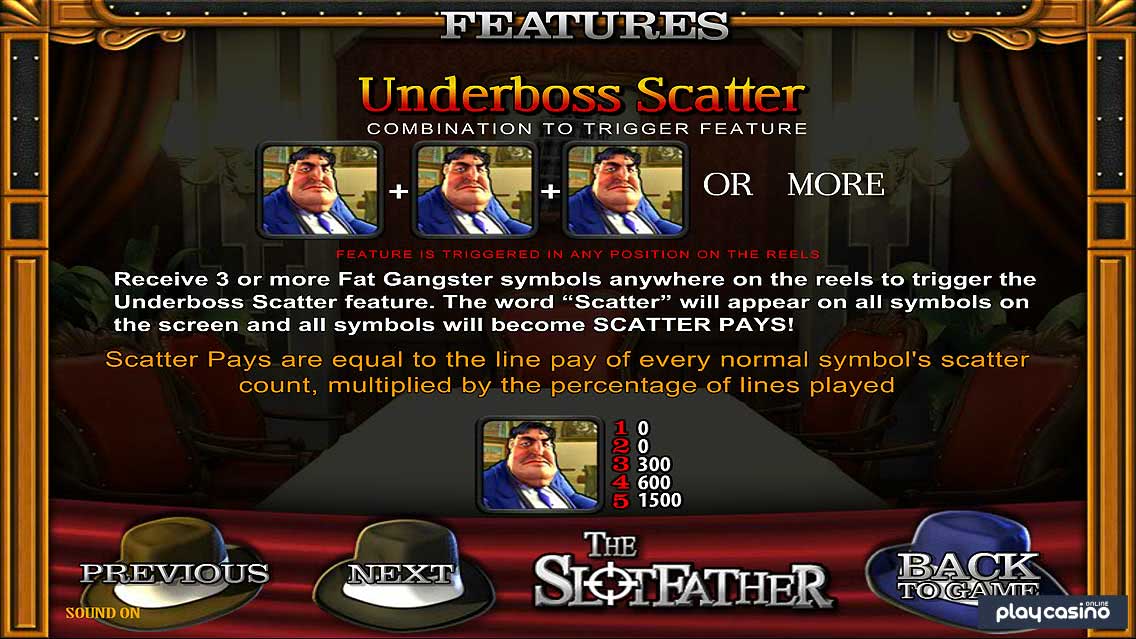 The Slotfather himself, styled after a more aggressive-looking Vito Corleone from the original Godfather film, is responsible for another bonus feature. When you get three of him on a payline, then you will be taken to a map where you’ll pick three businesses out of six available to place your slots in. He is the Slotfather, after all. Once you do that, each of them will earn you money, which is then paid out to your in one lump sum all together when you sit down with the boss and his men thank you for your work. 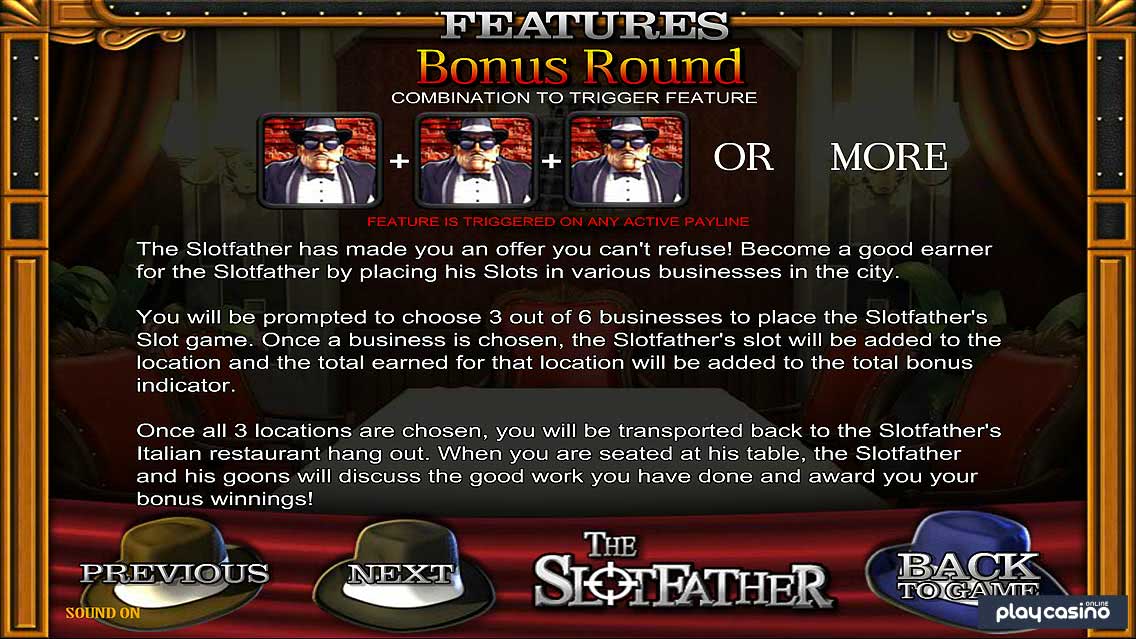 Jackpot and Other Top Wins

There is a progressive jackpot in The Slotfather slot, and you can win it by getting five of the Slotfather symbol on an active payline when betting five coins per payline. This is generally the largest payout in the game.

Each of these four regular-paying symbols will give you a win for two of kidn or more. All of the other symbols listed below require at least three on an activated payline for a payout.

An important part of the gameplay of The Slotfather video slot is that the pay table is extremely flat and balanced. The top win is a progressive, and that combined with the numerous bonus features does add a bit of volatility. However, the large number of medium-sized wins combined with having four different symbols pay out for just two of a kind tempers that volatility with a high hit-rate and a balanced pay table, so the volatility stays at a medium level overall. 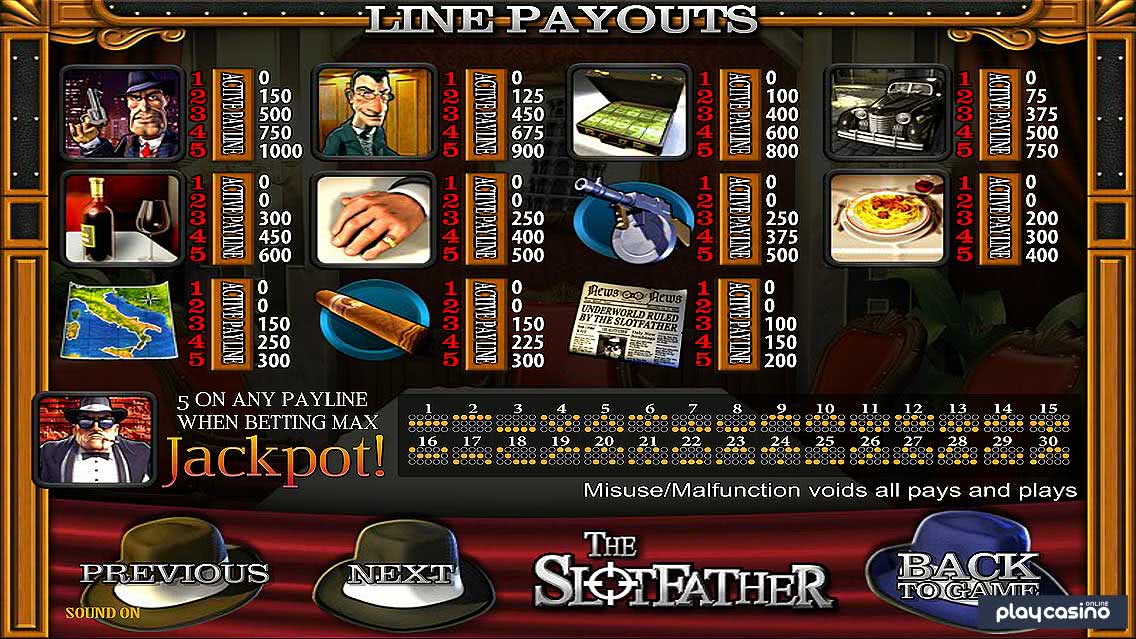 The Slotfather online slot is very feature-rich, and as a part of BetSoft’s Slots3 line of games, it has extremely high-quality, 3D graphics. The soundtrack for this game combined with the immersive theme makes this a great game with a lot of replay value, and the numerous features puts players in a position to win in several different ways on any given spin. With a balanced pay table and a progressive jackpot as well, it’s clear this game offers different types of players a good overall playing experience.