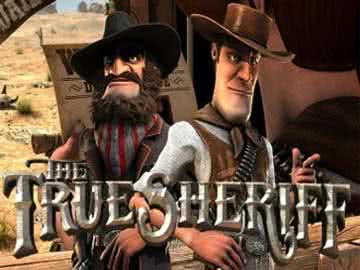 The True Sheriff slot by BetSoft is a Western-themed game with a shootout feature between the sheriff and villains.

A ton of different Western movies have been made, and they’re extremely popular among certain people. The occasional new Western is made as well, which only bumps up the popularity of the genre even more. BetsSoft’s The True Sheriff slot features everything that you would typically see in a movie like this, but it also features extremely strong, 3D graphics as a part of their Slots3 line of games. On the gameplay side, they offer some good top payouts with a reasonable volatility and features that fit the theme and concept of the game.

Format and Layout of The True Sheriff Slot

The format used in The True Sheriff video slot is a common one among BetSoft games. It has three rows of symbols across five reels, and there are 30 paylines. Players are given a control that would allow them to adjust the number of paylines they are playing on, but it should always be kept at the maximum level of 30. Playing with fewer may be an attractive option to use a smaller bet size, but it will hurt your RTP percentage significantly.

Instead, you should adjust your bet size based on the other options that are given to you. You can pick between one and five coins per payline, and you also have options to wager with coins that start as low as $0.02 and that go up to the $1 level. Players will have a resulting betting range of $0.60 to $150 per spin. 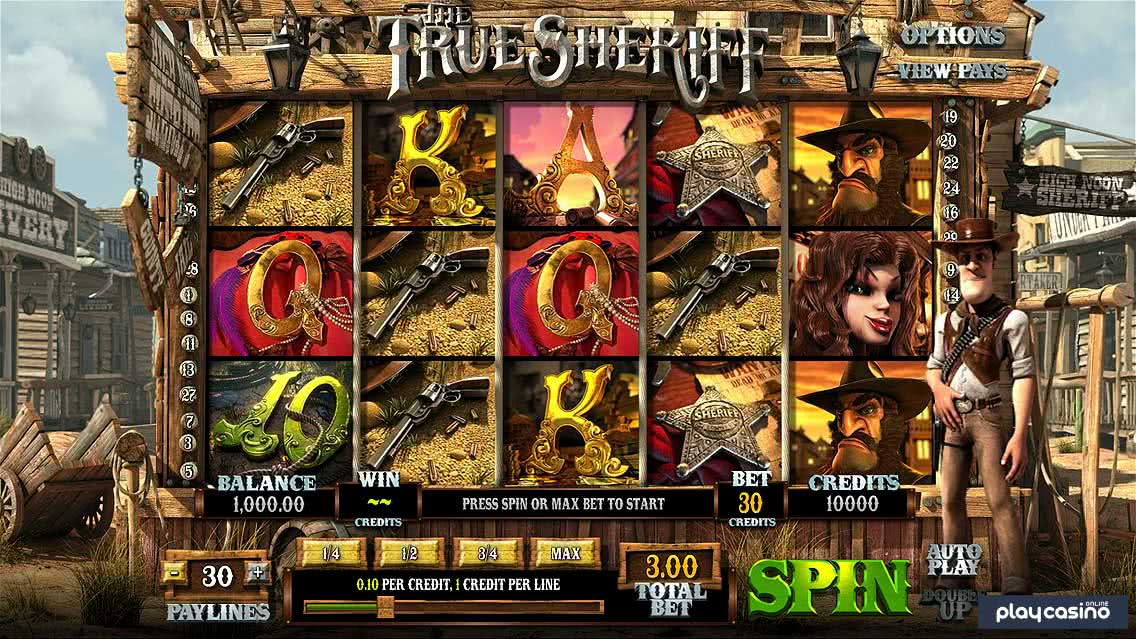 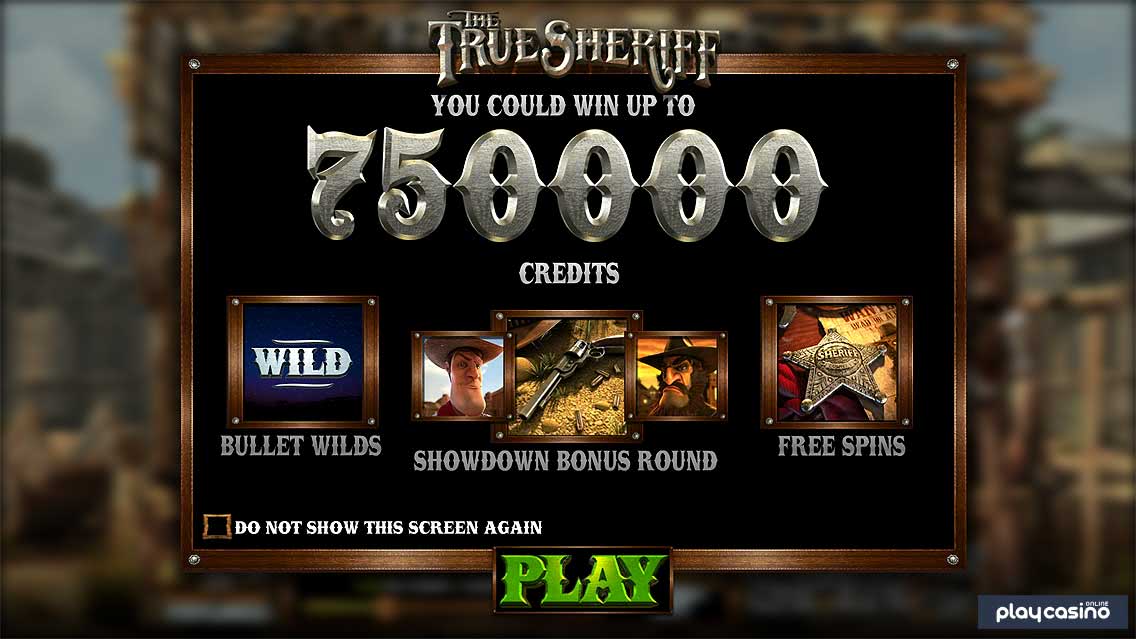 There is a pistol symbol that shows up on each reel, and it’s the wild symbol in The True Sheriff online slot. Players can earn a jackpot payout of 3,000x for five of this symbol on an activated payline. The win for four of a kind is 300x, and the payout for three of a kind is a smaller 30x. You also have to remember that these payouts will be in addition to the other wins that the wilds help you to get from other combinations on different paylines.

If you pick up the gun symbol on the third reel, then you trigger the Wild Guns Feature. When this happens, the sheriff will show up and shoot holes across the entire game board after your normal payouts have been given. This will give you up to five extra wilds. From there, the rest of the symbols will respin, and you’ll get a free chance to get some pretty significant payouts.

On the first three paylines, you can line up the sheriff, the gun and the bad guy, in that respective order or the reverse, to trigger the Showdown Bonus Feature. They will line up to have a showdown, and you’ll have a chance to win over and over again to rack up prizes.

It’s worth noting that this has to line up on the first three reels or the last three reels. If it happens on the middle three reels, the gun symbol will be on the third reel, and that will activate the Wild Guns Feature instead. 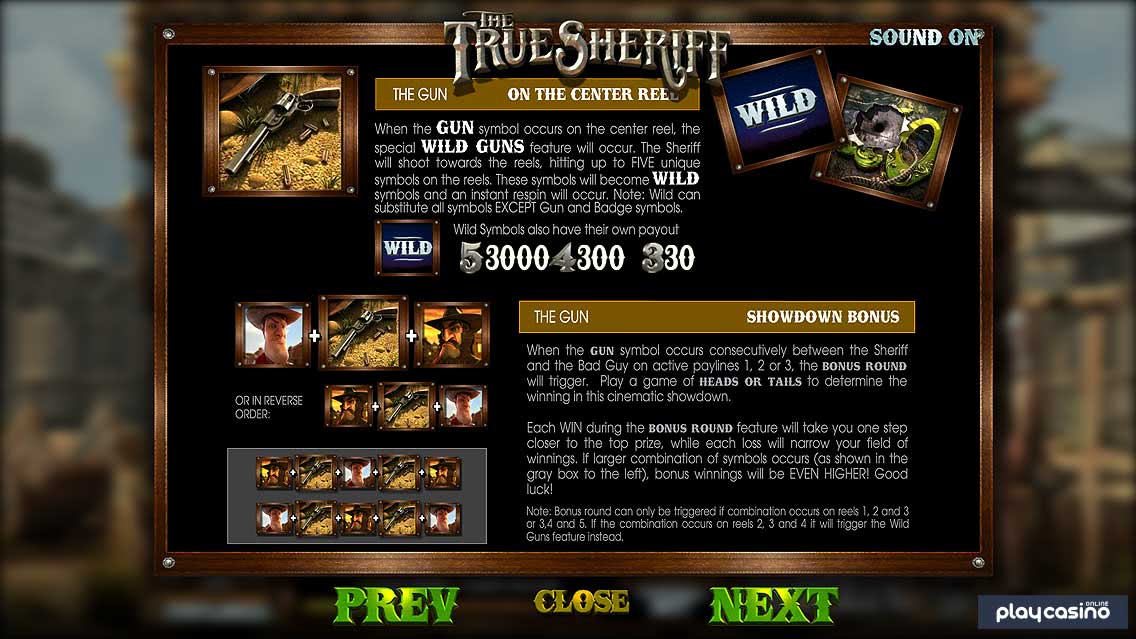 The Badge Scatter Symbols and Payouts

The badge itself is the only symbol that isn’t substituted by the wild gun symbol, but it has a lot of value attached to it. Five of a kind, anywhere on the reels, gives you a 3,000x top payout that matches the win for five of the gun. You can get 300x for four, but the win for three is higher at 60x. These symbols can pay by showing up anywhere on the reels, and they don’t have to line up on any particular payline to win. This makes a lot of sense as a scatter symbol given the theme of The True Sheriff online slot, and like all of the symbols in the game, it has an excellent visual appeal.

You can get a set of free spins for three or more of the badge symbol located anywhere on the game board. Three gets 10 free spins, four earns you 12 free spins, and five of a kind is worth a solid 15 free spins.

During this mode, you’ll not be able to re-trigger the feature with the badge symbol. Instead, each badge that shows up will add to the badge counter that you’ll see on the screen. At the end of the free spins bonus round, the number of badges you collected will correspond to an extra win that you’ll collect as a lump sum prize. This isn’t an approach for giving extra value during a free spins feature that we see very often, and we like how it guarantees you get paid off of extra scatter symbols. 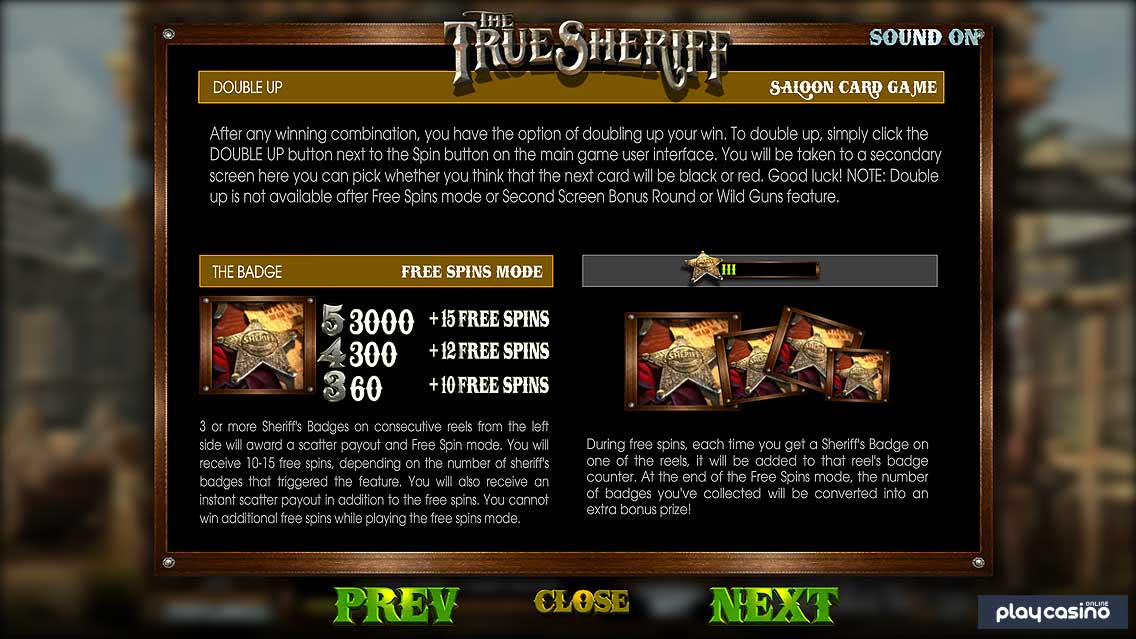 Other Top Symbols and Wins

Players will find four characters on the reels that reflect the typical cast of characters found in the average Western. You’ll be hard-pressed to find a Western movie that doesn’t feature these four types of characters in important roles.

First up is the sheriff, and he’s generally a hero type. He’ll get you a 1,200x win for five of a kind. That’s the second-largest regular payout in the game, and it makes sense given that the slot is named after him. The bad guy is wearing a black hat with a dark beard and mustache, and he gets you 900x for five on an activated payline. The older man, who is likely the mayor, pays 360x for five of a kind. You can also win 240x for five of the woman, a likely worker for a local saloon. 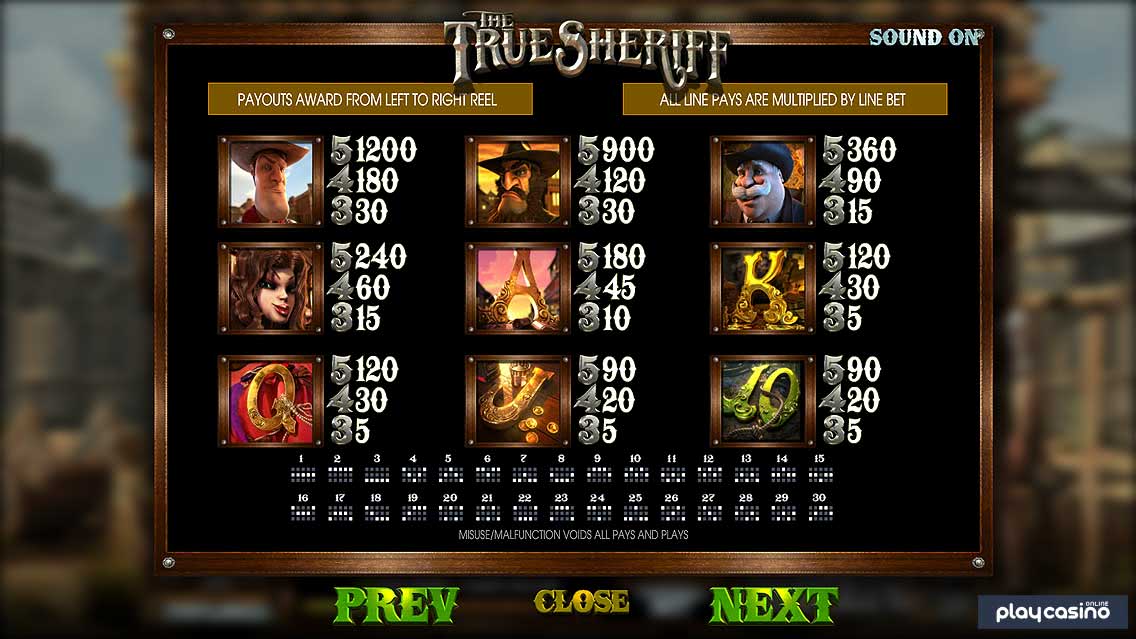 The True Sheriff video slot’s popularity shows that BetSoft knows exactly what they are doing when putting together a game. The theme of this game is actually somewhat generic, but most players wouldn’t even think about that because of how well it’s executed. The graphics are top-notch and have a legitimate claim to being among the best in the industry, and the feature set is tremendous. Add that to a balanced pay table with some strong top wins, and you have a winning mix that no player could argue with.