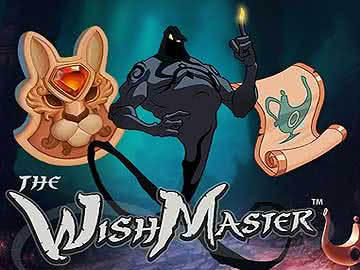 The Wish Master slot by Net Entertainment is based on a genie that appears to give you different features to boost your chances of winning.

There have been tons of stories done about a magical genie who shows up out of a lamp to give you wishes. Net Entertainment has captured this theme in a great way with The Wish Master video slot, and it’s based around a genie who will grant you wishes for extra features added to your gameplay. It’s a cool concept, and the graphics are great as well. Combined, they create a particularly fun and action-filled experience.

Format for the Wish Master Slot

Net Entertainment tends to stay within the bounds of particularly typical layouts, and that’s the case with this game as well. The Wish Master uses five reels with three rows, and there are 20 paylines to play on. Coins range from $0.01 to $0.50, giving players a bt size of $0.20 per spin as a minimum. Additionally, you can put up to 10 coins on each payline per spin, and that allows for a maximum bet size of $100. This is a pretty wide range of bets that you can make, and that means there’s something for players at all different levels.

There is a scroll with a magical lamp on it, and that is the scatter in this game. Whenever you get one anywhere on the reels, the genie comes out and gives you a random feature from a set of seven available features, and a timer is started for 10 spins. That feature will be available for the following 10 spins.

However, If you get a new scroll on the reels before those spins run out, then you will get an extra feature added at random, and another five spins are added to the counter. This can happen over and over again, but you can only have three features activated at once. If you already have three and get another scroll, the first feature you earned will be removed and replaced with a new one chosen at random, but you will still get the extra five spins added to the count.

The genie can give you a number of different random features. Here are the features that are available in The Wish Master video slot:

You can get up to three of these features activated at the same time, and that gives you a chance to run up some serious winnings.

Of the eight paying symbols, there are four that have animal motifs with gems. It’s easiest to note them by their colors. The purple one is the highest-ranking one of the bunch, and it has a base payout of 750x for five of a kind, the best regular pay in the game. The Wish Master slot also gives 500x for five of the orange cat-like symbol.

Next up is a green scorpion with a green, emerald-like gem right in the middle of it. This symbol will pay out a nice 400x win for five on a payline. Five of the blue ram symbol will get you 300x as well.

The bottom four symbols are card ranks. They follow the same color scheme as the four animal symbols, and that can make it a little easier to remember which animal symbols give bigger payouts than the others while you’re in the middle of playing the game.

There are certain paradigms that players get used to when they play slots, and The Wish Master breaks one of those paradigms, how game features are distributed, in a major way. Net Entertainment has done a solid job with tying together the theme of the game and this atypical way of assigning features, and it helps to create some particularly exciting gameplay. This is the type of thing that helps to push the industry along in terms of innovation, but it also gives players a different types of experience than what they’re probably used to, which also helps this game stand out in a major way.