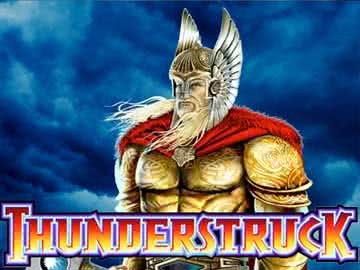 Thunderstruck is one of the most popular slots Microgaming has ever produced with nine paylines and a free spins feature.

There are certain games in the online slots industry that have changed things forever, and the Thunderstruck slot by Microgaming is one of those. It wasn’t the first game to have a free spins bonus feature with multipliers, but it was the game that made that feature fashionable and popular. Hundreds of games were influenced by the bonus feature that was made popular by this slot, and to this day, it’s still one of the most influential titles to ever be produced online.

Layout and Format of the Thunderstruck Sllot

At the time this game was produced, it was uncommon for a game to have more than 20 or 25 paylines. In fact, the five-reel, three-row and nine-payline layout that this slot has was actually one of the more popular formats at the time. If offers enough ways to win that the features keep the game particularly exciting, but there aren’t so many that it’s just a blur of misses on every single spin.

Microgaming made sure players had a lot of flexibility with the betting. They allow you to play with fewer than nine paylines, but you shouldn’t. This will hurt your RTP. Instead, you should pick between one and five coins per line and between coins that are worth $0.01 to $2 apiece to choose a bet size. The minimum size for a spin is $0.09, which is ultra-low and inclusive. You can also play for as much as $90 per turn, and that gives high rollers plenty of betting options as well. 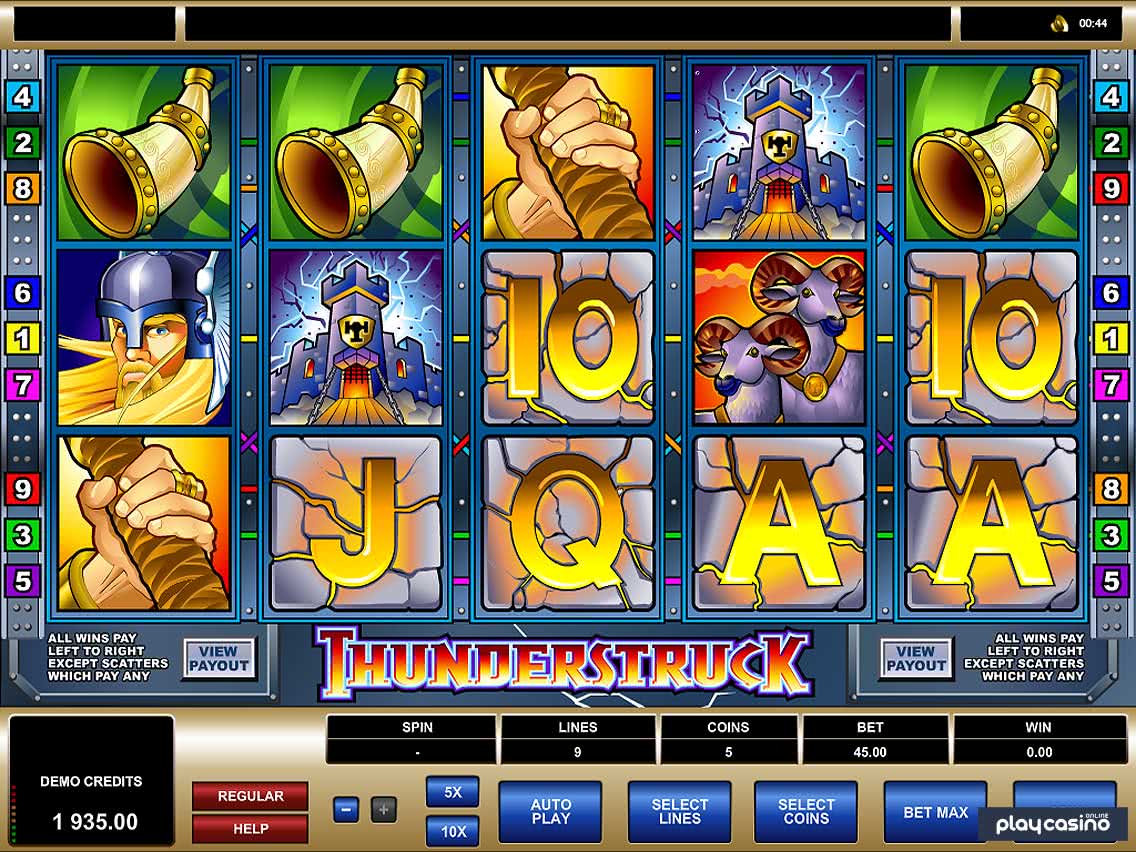 Because of the comic books, Thor is probably the most well-known figure from Norse mythology in the world, and he’s the wild symbol in this game. Any winning combination that uses at least one Thor wild symbol is multiplied by a factor of two in this slot as well, and that puts you in a position where you can end up with bigger wins than you thought for virtually the entire pay table.

The jackpot in this game is 10,000x, and you win it when you line up five of the wild Thor symbol on an activated payline. A secondary jackpot is also available for four of Thor, and that is worth a 2,000x payout. Wins of 200x and 10x can be had for three of a kind and two of a kind as well, and this is one of only a few symbols in the entire Thunderstruck video slot that pay out for two of a kind or more.

The other of the two most important symbols in this game is the set of rams. The ram symbol is a scatter in the Thunderstruck online slot, and they are responsible for the second-highest payout in the game as well as some other good wins.

If you pick up five of a kind, anywhere on the reels, then you’ll be given a win worth 500 times your total bet. This is the same as a 4,500x line bet payout, which is pretty huge. Wins of 20x, 5x and 2x can be yours for four, three or two of the ram symbol, respectively. Keep in mind that all four of these scatter payouts are multiplied by the total bet, so you can multiply them by a factor of nine to see what they would be if they were listed as line bet wins instead.

The bonus feature in this game is what it’s most well-known for. As we mentioned above, this is the one slot that put free spins rounds with multipliers “on the map,” so to speak, and it gives players a lot of value as a result.

When you pick up at least three of the scattered ram symbol at once, you’ll be given a set of 15 free spins. All of these free spins are given a 3x multiplier. What’s important to note is that this combines with the wild multiplier to give you effective multipliers of 6x for winning combinations that include at least one wild. That means you’re going to be in store for some tremendous payouts, and it also means that the top jackpot jumps up to the 30,000x level for five of the wild Thor symbol, which is enormous to say the least. 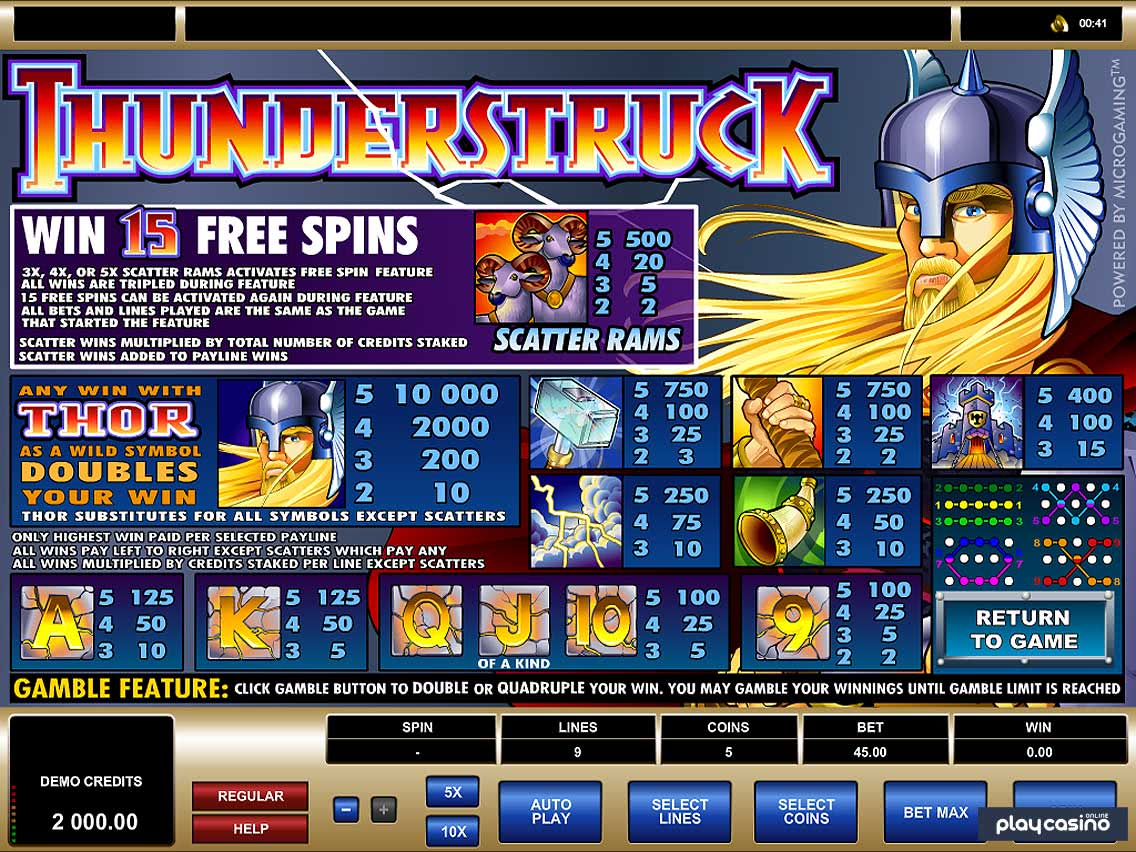 Other High-End Symbols and Prizes

Aside from the wild Thor and scattered ram symbols, you will find that there are five major symbols in the upper tier of wins. Thor’s hammer is at the top of that set, and it’s worth 750x for five of a kind. The symbol with him gripping the hammer is also going to give you 750x for a five-of-a-kind combination. Each of these two symbols will also pay for two of a kind or more, which puts them with Thor and the ram as four of the only five symbols in the game that do this. The rest need at least three for a payout.

The castle symbol will pay out 400x for a set of five on a payline. You can also win 250x for five of the lightning or five of the horn symbols. All of these symbols have importance in Norse mythology, which is an example of how the Thunderstruck video slot really immerses players in the overall theme.

The card rank symbols in this slot are in a bold and gold font in front of a stone wall, and that fits the visual motif and overall theme of the game pretty well. The A and K symbols both have a 125x top payout for five of a kind. You can also win 100x for five of the Q, J, 10 or 9 symbol. The 9 symbol is special in this case, however, because it’s the fifth symbol that allows you to win with just two of a kind. You’ll win a 2x payout for two of a kind of the nine symbol, but all of the other card rank symbols need a minimum of three in a row for a payout.

The Thunderstruck online slot by Microgaming will always have an important place in the overall history of the industry because of how influential it was. It’s still a fairly popular title to this day, and it could very well be the most popular game in the entire online slots industry that is from this era of games.

In terms of how it holds up now, it has very good gameplay with a lot of ways to win big, and the bonus feature is still value-packed even by today’s standards. There are a lot of medium-sized wins as well, but the volatility is still a bit on the high side, which is fine for a lot of players.