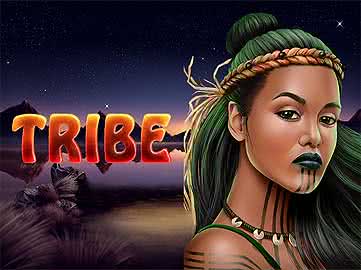 Endorphina’s Tribe video slot uses a Polynesian theme, which is something we’ve never seen before. It has nine paylines and gives players chances at free spins and multipliers with a very strong level of aesthetic appeal.

The Tribe online slot by Endorphina is based on the Polynesian islander people. It uses a theme that has a lot of people from this culture along with symbolism and motifs of the same sort. The style of graphics is particularly strong as well, and this is mixed in with a dynamic style of play that offers a good balance between the value on the regular pay table and the value that you can get from the bonus features. We think players will like this title for multiple reasons, and that’s the perfect way to have a game like this set up so that it appeals to the largest number of players overall.

Format and Layout of the Tribe Slot

With a game like this, you’re getting a somewhat older layout with just nine paylines. This is intentional because it plays into how the features work, as you’ll see down below. There are five reels and three rows of symbols as well, and you’ll see that the symbols come down sliding on planks of wood. The number of lines can be changed to any value between one and nine, but it’s best for your return to player percentage if you keep it at nine. This means better chances of winning in your sessions no matter what your bet size is per line. 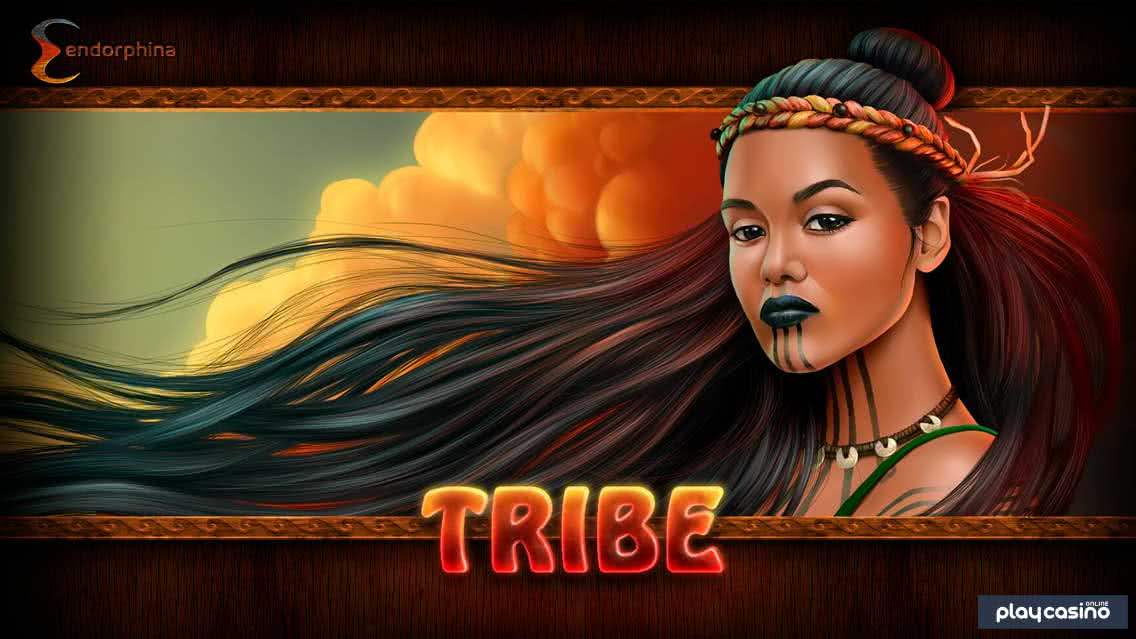 From there, you can pick two options to change the size of your bet. The first is how many coins you have on each of the lines, and that’s up to ten at a maximum. You can also pick from various coin sizes with the minimum coming in at $0.01 for a $0.09 minimum total bet size. This gives you the ability to bet with coins worth as much as $1 as well, and the maximum total wager available is $90 per turn, which covers a range wide enough that virtually everyone will have a size that works for them available. 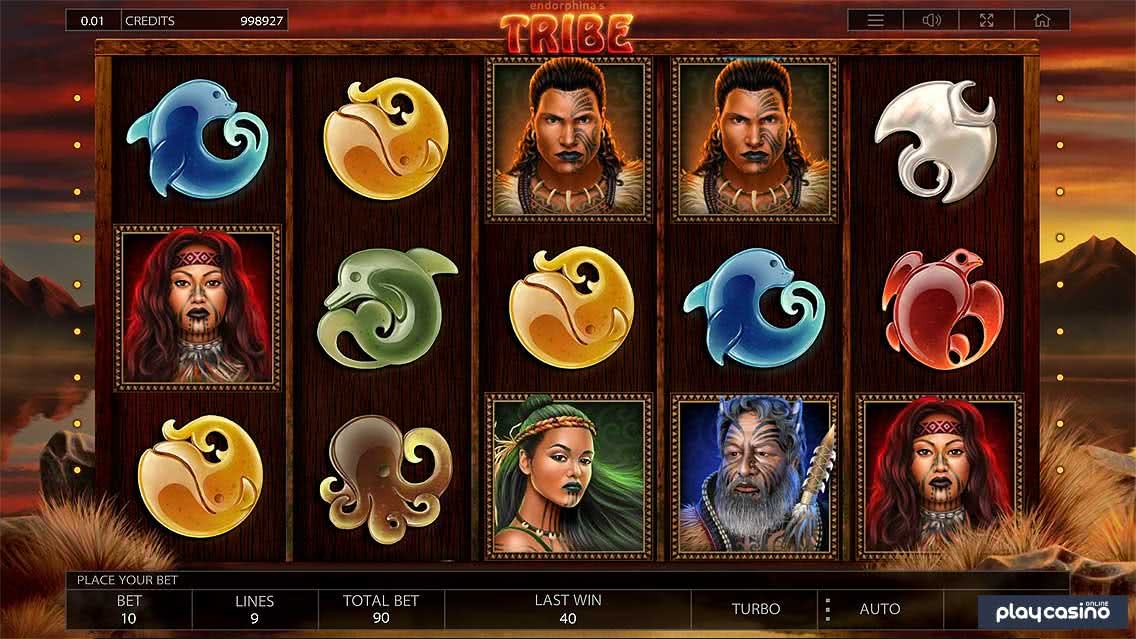 One aspect of the Tribe online slot that you have to understand is that you must check the risk game with the wins you get if you want to get the best RTP percentage. However, you won’t actually be playing it most of the time. The way this works is that it’ll show one card face-up with four cards face-down. You get to see the face-up card before you make a wager to try to double up your payout. If the card showing is a five or lower, then you’ll need to make the wager so that you can take advantage of having an edge against the casino.

However, if it’s nine or higher, the casino will have an edge against you, and you should not play. Finally, showing a six through eight has an even money payout, so it doesn’t matter if you play or not. Playing will increase your volatility, but it will not decrease your RTP. 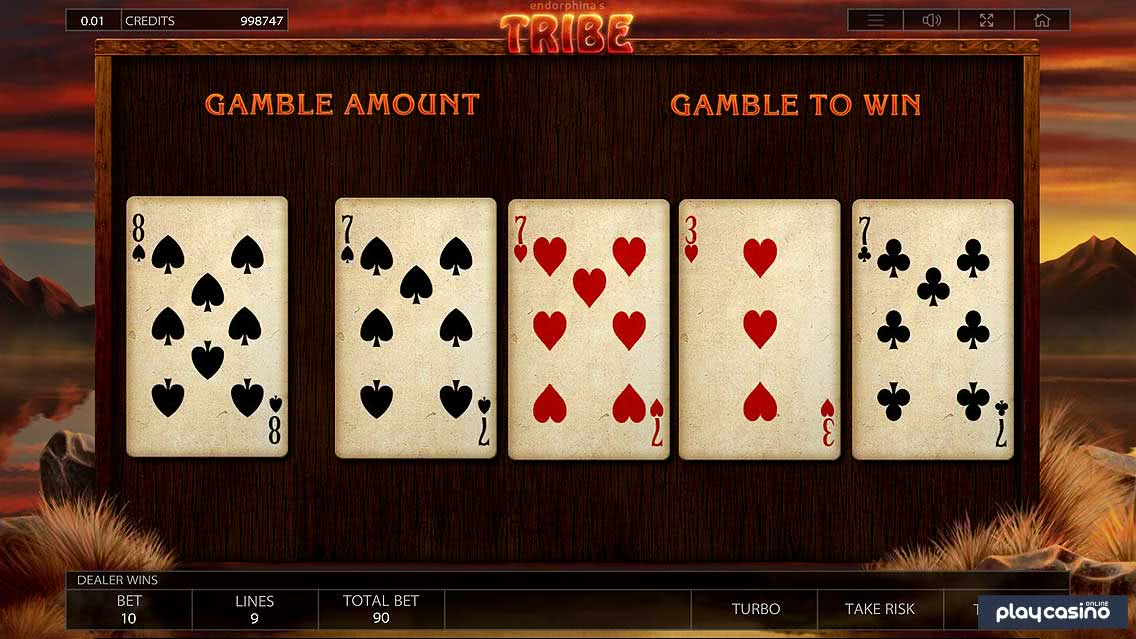 The Tribe video slot also has a wild multiplier. It’s a group of men in a boat facing the left-hand side of the reels, and it shows up on each reel. Whenever a minimum of one of them are used in a winning combination, then that combination’s value is doubled thanks to the multiplier. However, multiple wilds in the same winning combination keep the total multiplier at 2x. Additionally, this symbol does not substitute for the scatter symbol, the green sun or the red sun symbols.

Five of a kind of this wild earns a top payout of 9,000x. That’s a pretty sizable jackpot. Four of a kind is also worth 2,500x, which is also a fairly large win. Payouts of 250x and 10x are yours for three of a kind and two of a kind combinations as well.

The scatter symbol during this game is a golden sun with a blue tongue sticking out. Five of a kind anywhere on the game board pays out a 4,500x secondary jackpot, the second-largest prize available in the game. You can also win with two or more, no matter where they show up on the reels, with 18x, 45x and 180x payouts being yours for two, three or four of a kind, respectively.

The main bonus round for the Tribe video slot centers around unlimited free spins, and it’s triggered when you get at least three of the scatter symbols on the reels at the same time. Whenever this starts, you’ll see blue suns on the counter beside of the reels. Each green sun symbol adds a blue sun to the meter and gives you a 2x payout. The red sun symbol does the opposite by subtracting a blue sun from the meter, but it also gives you a 2x payout. Note that these 2x payouts are multiplied by the total amount of your bet.

Your free spins will continue as long as there are any blue suns left on the meter. Note that on top of this, all of your wins from the free spins mode will be tripled. This can combine with the 2x wild multiplier to give a total multiplier of as much as 6x. 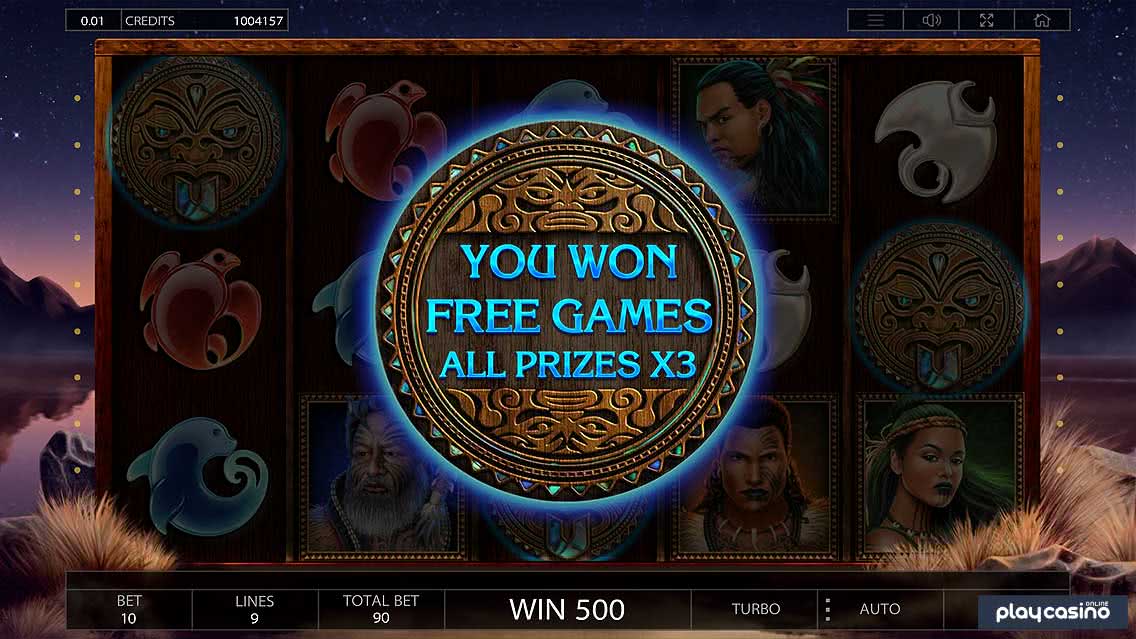 You’ll notice that there are five different character symbols on the reels of this game, and they make up the upper-level pays other than the scatter and wild. The red woman and blue old man gets you 750x for five, and each of them pay for two of a kind or more. All of the rest of the symbols that we’re going to mention require at least three of a kind on a payline for a prize.

The green woman and man symbols will each get you a solid prize of 250x whenever you line up five of a kind on a payline. In addition to this, you can get 400x for five of the orange man with flames behind him. These are well-rounded prizes overall. 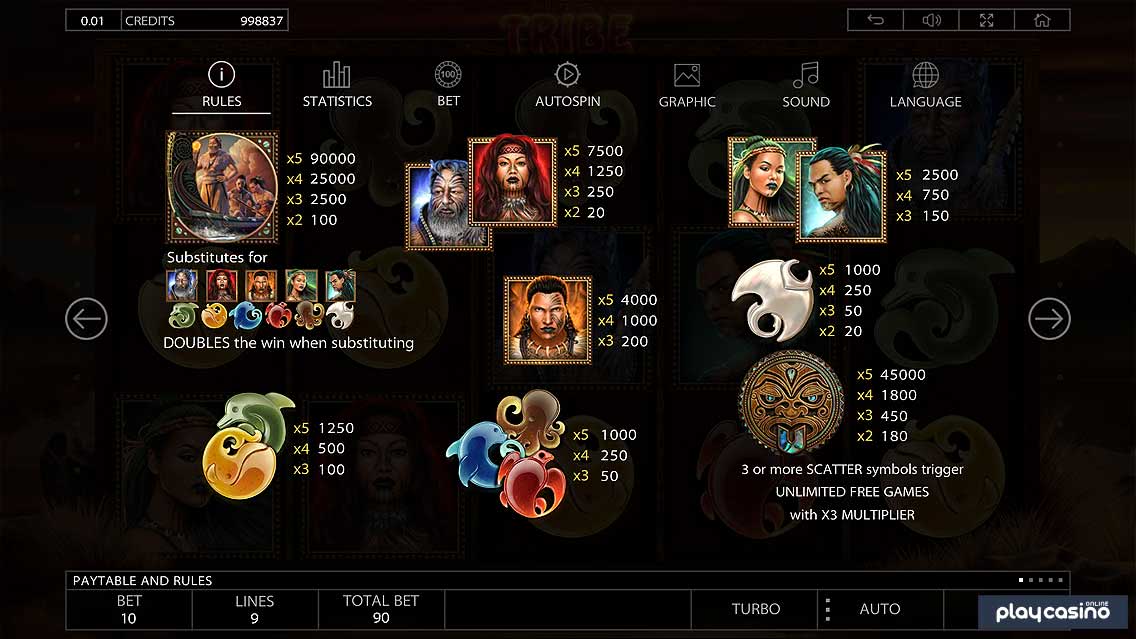 Six different animal symbols make up various lower-level prizes. They really only come in two different tiers. The first tier is the green dolphin and the yellow whale, and you can pick up 125x for five of either of these. The second tier consists of the red grab, the blue dolphin, the brown octopus and the silver manta ray, and each of these pay out 100x for five. Note that the ray is an exception to the rule noted above because it’ll also give you a small win for two of a kind.

There’s a lot to like about the Tribe video slot, and Endorphina definitely did a solid job with it. The thing you need to understand about this game is that its volatility is on the upper end of the medium range, so you may want to use a smaller bet size than you typically do until you get a feel for what the swings are like. Outside of that, it’s a popular game that’s an important part of their overall portfolio.