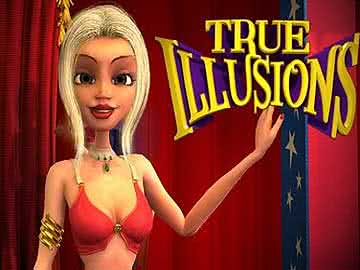 Something that has been a popular form of entertainment for a very long time is stage magic. Illusionists of this type really touch something deep inside of us that makes us want to see more and more, and the True Illusions video slot brings that excitement to the reels. This game has great 3D graphics thanks to being a part of the Slots3 series of slots, and the gameplay centers around a balanced pay table and some features that all tie into the magic theme. Overall, this is a title that’s very well-rounded, and that’s why it’s stayed so popular and has retained so much replay value since it was first released.

Format and Layout of the True Illusions Slot

The game itself has a layout that’s pretty usual. Players will have five vertical reels of symbols along with three horizontal rows that set the stage, so to speak, for 30 paylines. These lines only pay out from left to right, and they’re designed so that there are enough ways to win that things stay exciting with a strong hit-rate, but it doesn’t break over into the territory where there are so many paylines that it just gets out of hand. That’s a concern that BetSoft has managed to avoid in this title, and that’s good because it would have distracted from the core gameplay. 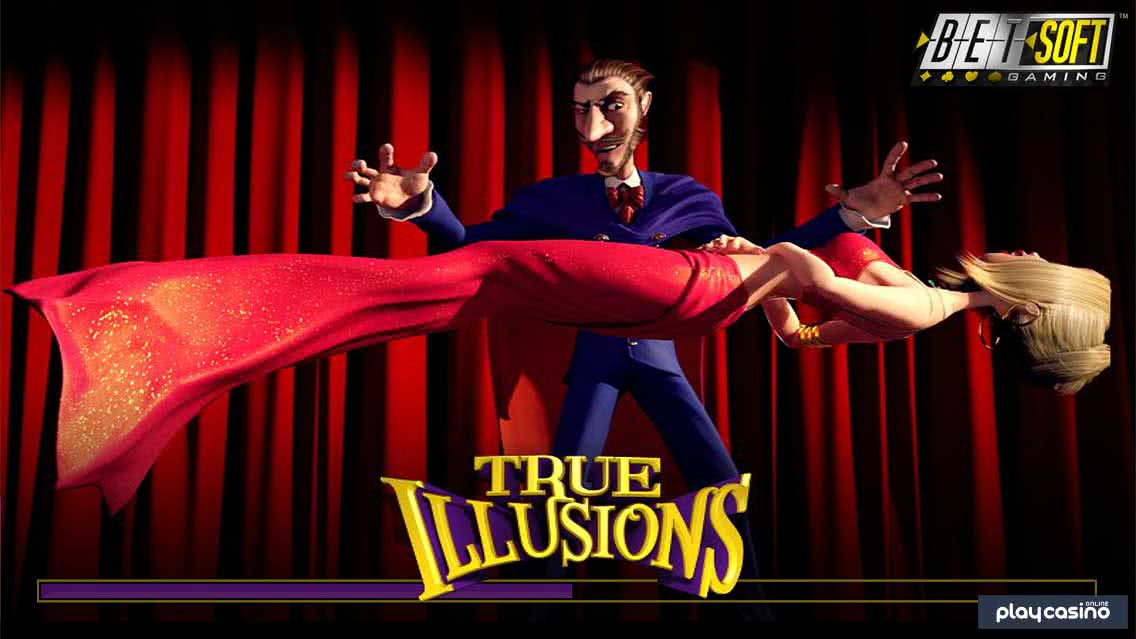 Players have three options for changing the bet size. One is to change the number of paylines, but it’s best to just keep that at the maximum of 30. Instead, you can bet between one and five coins on each line, or you can wager with coins that go from $0.01 to $1 each. On the low stakes end, bets as small as $0.30 are available that will fit within the bankrolls of anyone. On the upper end, however, you can actually wager up to $150, so high rollers will be satisfied as well. 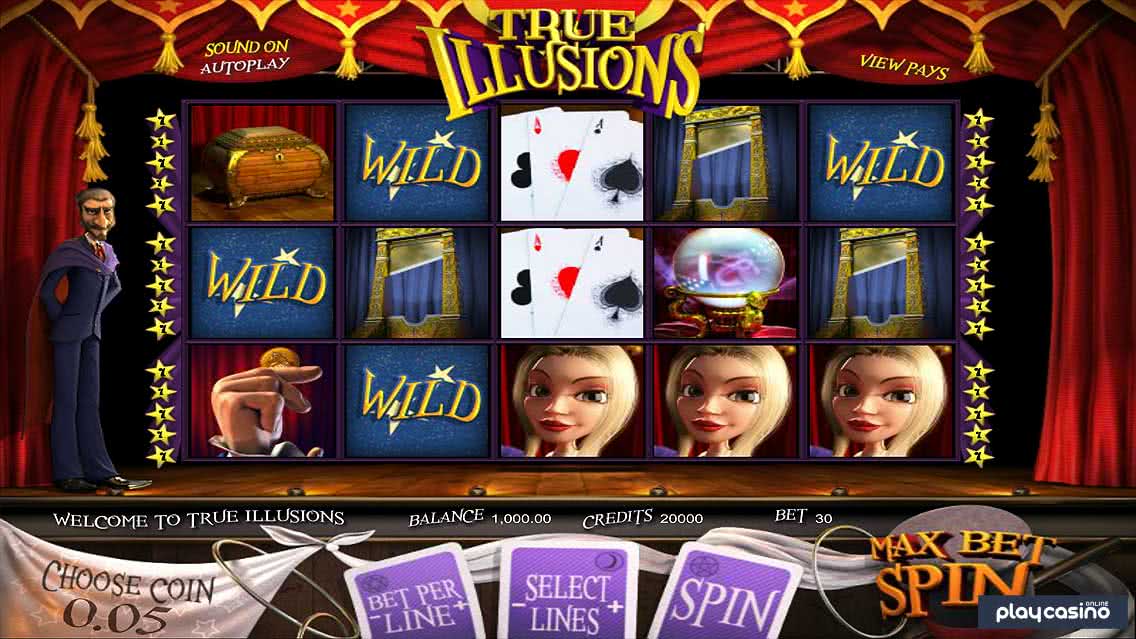 Something that most players take for granted in titles like the True Illusions online slot is the wild. In this game, there is a wild symbol, and it does show up on each reel. However, it stands out a little because it shows up stacked. What this does for the gameplay is that it makes it a little less likely that you’ll get wilds on any given spin, but when you do get them, you can end up with two or even three on the same reel, which means more chances for multiple wins on the same spin.

It’s worth noting that you can get some pretty incredible payouts with this, especially if you get multiple stacked wilds on the reels at the same time, because of the ability to earn multi-line prizes. With the balanced nature of the pay table and the number of wins in the upper and mid-level range, it’s something to really keep in mind.

The stacked wilds are actually the key to an important feature. If they stack on the third reel in a way that completely covers it with three symbols, then you activate the wild reel feature. In this feature, you’ll have up to seven turns at the same level of stakes with the center reel held completely wild. This is obviously a value-packed proposition, but you will have to pay for those spins, and you will not be able to change stakes until it’s over with. Regardless of that, we like that this feature stands out from what you normally see in games like this as being pretty different. 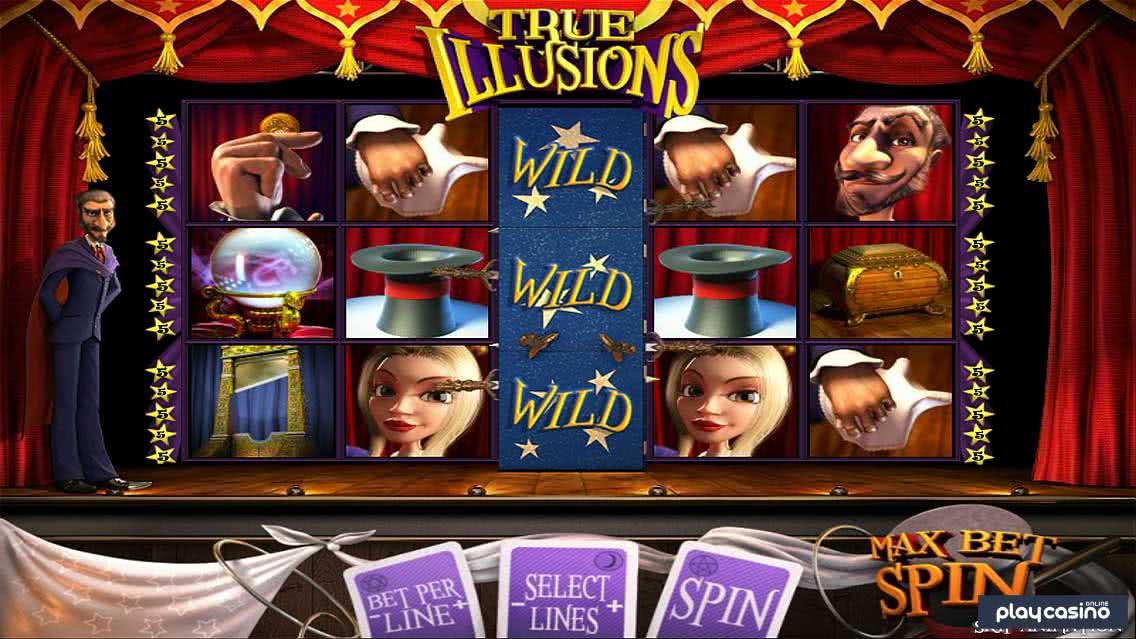 The True Illusions video slot also has a free spins mode. You’ll trigger this round by getting three of the magician symbol himself with his mustache and beard on the game board, and it doesn’t matter where they show up as long as they’re all visible at the conclusion of the spin.

During this feature, you’ll have the cascading wins feature activated as well. With this feature, winning combinations pay out and then disappear to allow new symbols to fall into place. This means more chances to get extra wins, and it also means that the free spins are worth more than their normal counterparts.

You’ll see a symbol on the reels occasionally that has four aces from a standard deck of cards on it. This is a bonus symbol, and at least three of them on the game screen give you a play at the card picking bonus feature. The approach for this feature is actually very simple. All you’ll need to do is pick one of the cards presented to you, and the card you pick will give you an instant win. You can try to pick the best card you can for this, but in the end, it really just comes down to randomness since there’s no way for you to know which is which. 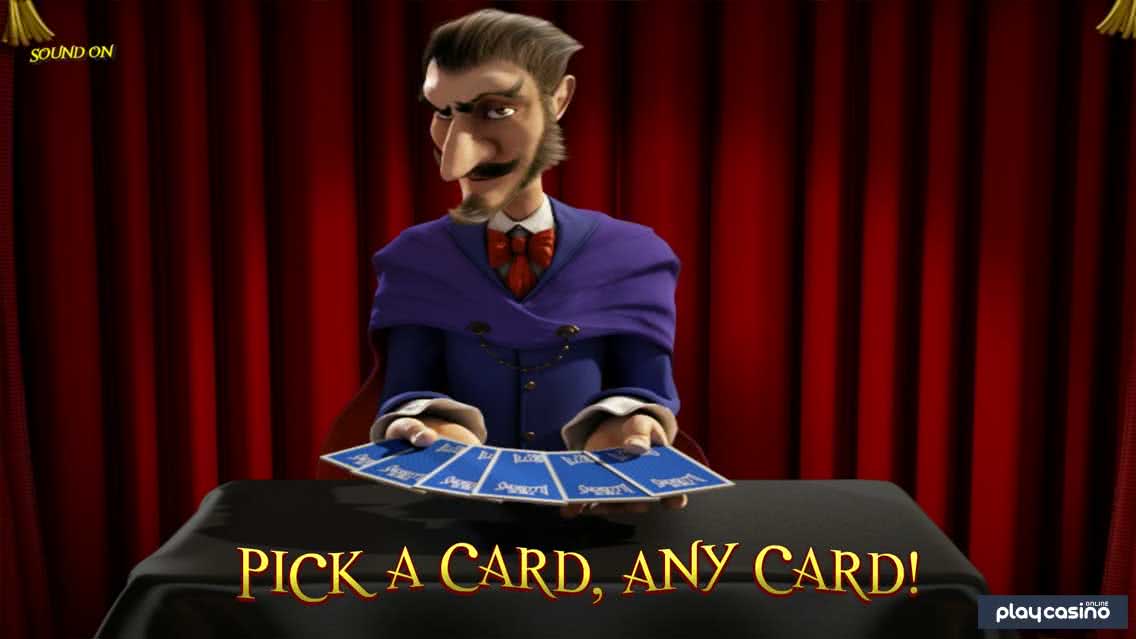 Eight total paying symbols are found in the True Illusions online slot. The beautiful female assistant is the highest-paying of the bunch, and she’ll grant you a 500x prize when you get five of her on an activated payline. The wooden chest is next on the list, and it’ll earn you 300x for five of a kind. Likewise, you can pick up a 200x win for five of the guillotine.

What you’ll notice about this pay table distribution is that there are plenty of wins at the upper, middle and lower end of the overall range of payouts. This helps to create a balanced play experience that isn’t top-heavy or bottom-heavy, which means a more reasonable volatility. 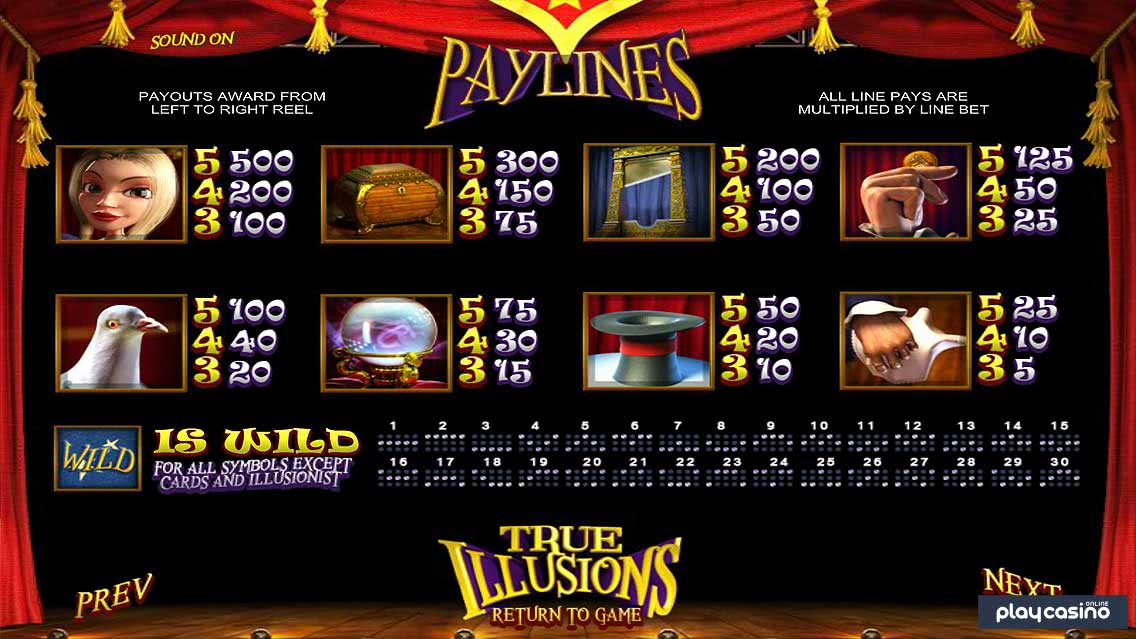 The True Illusions video slot captures all of the fun and excitement of watching stage magic while making things even more exciting because of your ability to win some serious prizes while you’re playing. The feature set is pretty strong as well, and we like how all of the features tie into the magic theme in a way that makes sense. The combination of a strong performance in so many elements of what people look for in slots is what has kept this game so popular over such a really long period of time.