Play Under the Bed Slot Free 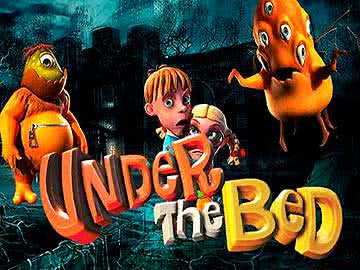 Under the Bed is a feature-driven online slot with 30 paylines by BetSoft. It uses 3D graphics to show a couple of kids checking out the monsters under the bed with a sticky wild feature, a monster fight bonus round and a free spins bonus mode.

Games that have atypical themes and concepts, particularly if they’re executed well, almost always do really well in the online slot world. That’s the case with the Under the Bed video slot, a game produced by BetSoft as a part of their Slots3 line of titles. It features two kids, Jesse and Jane, who get the nerve up to check out what’s going on with the rumblings under their bed. It’s a fun themes that’s paired up with excellent 3D graphics and a set of features that keep the action driving forward at all times. All of these aspects of the experience come together in a way that has made this title fairly popular.

Play Under the Bed Slot for Free

Format and Layout of the Under the Bed Slot

One of the formats that BetSoft uses a lot is used in this game as well. That is a layout with five reels and three rows and 30 paylines. They probably use this number of lines more than any other software provider out there, and for whatever reason, it’s become sort of a staple for them. While they do give you the option to drop below 30 paylines, doing so lowers your return to player percentage, which drops your average winnings over your sessions. You obviously don’t want that, so keep the number of paylines at the max. 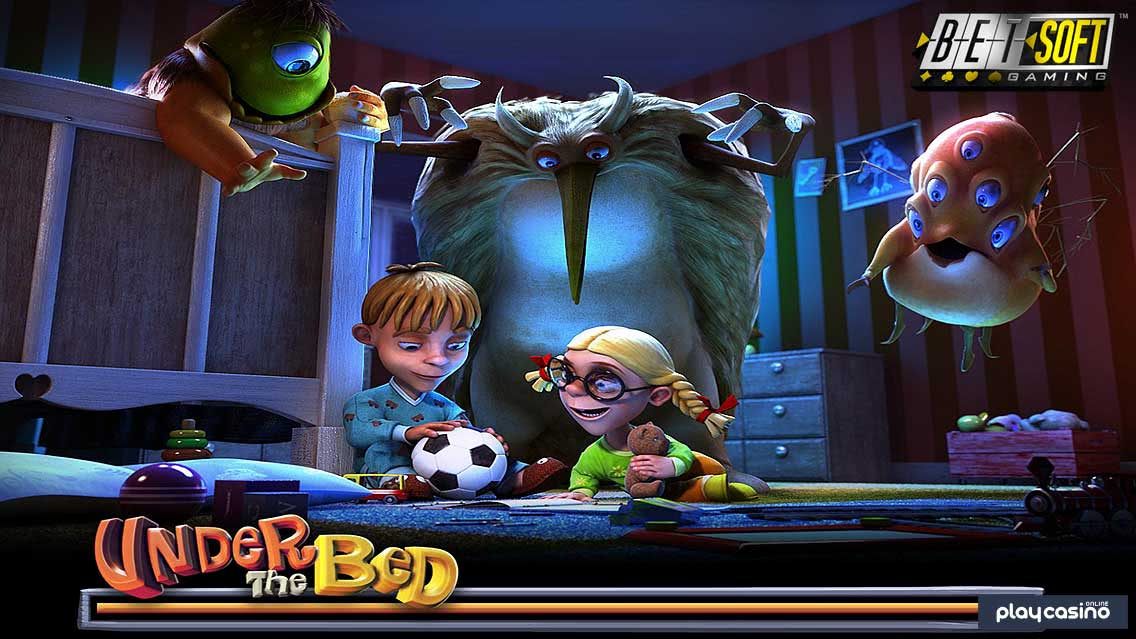 The betting is centered around two other options instead. One of those is having coins that are worth from $0.01 to $1 each, which lends itself to a minimum bet of only $0.30, and that’s within the bounds of virtually any size bankroll. However, since you can bet as many as five coins on each line, you can also wager as much as $150 per turn, which will satisfy players who want to play for much higher stakes. With tons of options for different sizes between these two extremes, it’s not difficult to see how inclusive this title’s betting options really are. 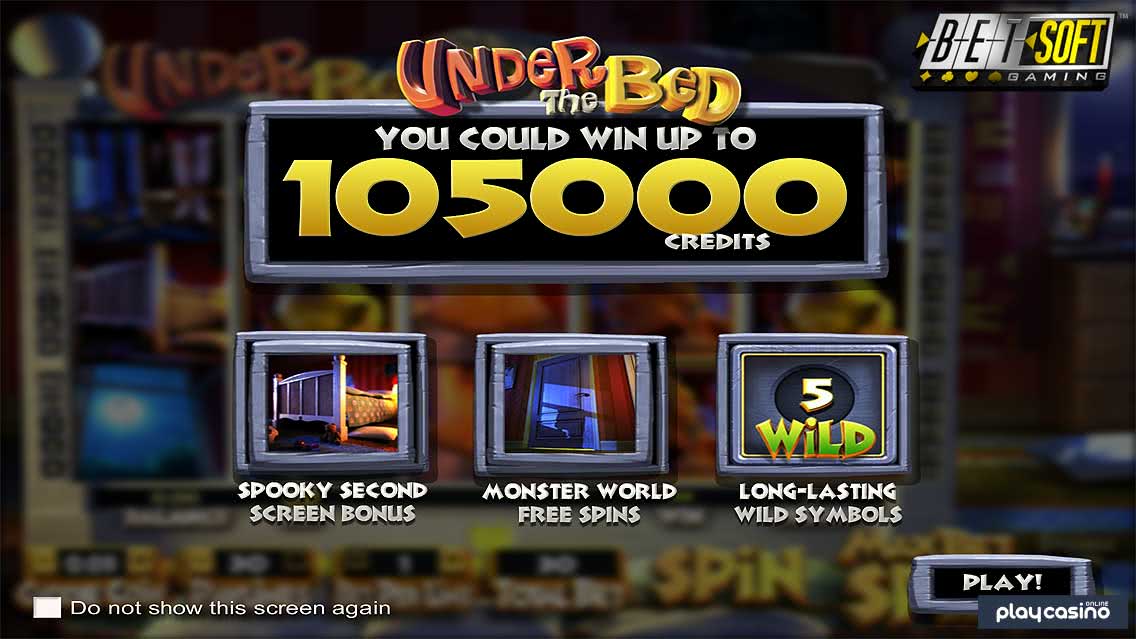 A regular wild symbol is not used in this game. However, the wilds are handled differently with a very atypical and stylistic approach from BetSoft. In the Under the Bed online slot, you’ll be able to pick up symbols that have golden rims around them. If you make a winning combination of any size of any monster symbol that has this gold rim around them, then it triggers the sticky wild bonus feature, which is the only source of wilds in this game. 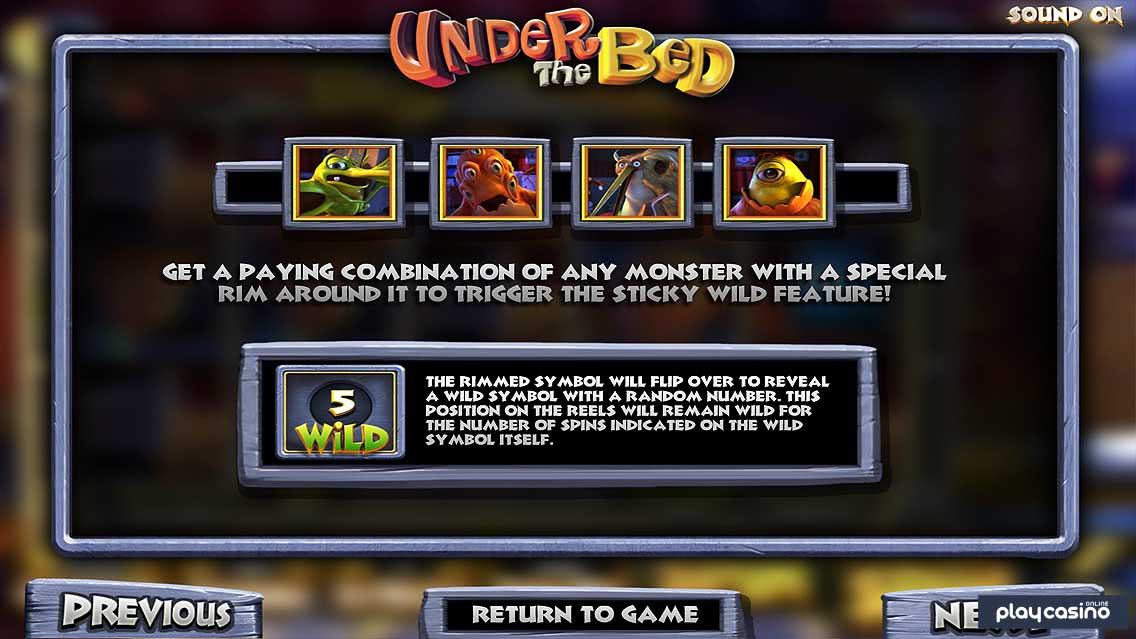 The way this works is pretty simple. The winning symbols from combinations that have the golden rim around them will turn into sticky wild symbols. A number will be placed on them that’s random (generally up to a maximum of five), and that’s how many spins the wild will stay in place. This gives you clusters of wild symbols that can make it easier to get multiple wins on the same spin if you pick up more than one at a time, and it obviously makes getting winning combinations much easier than it would be under normal circumstances. We like how they went in a different direction with the wild symbols than what you see in most titles in the industry. 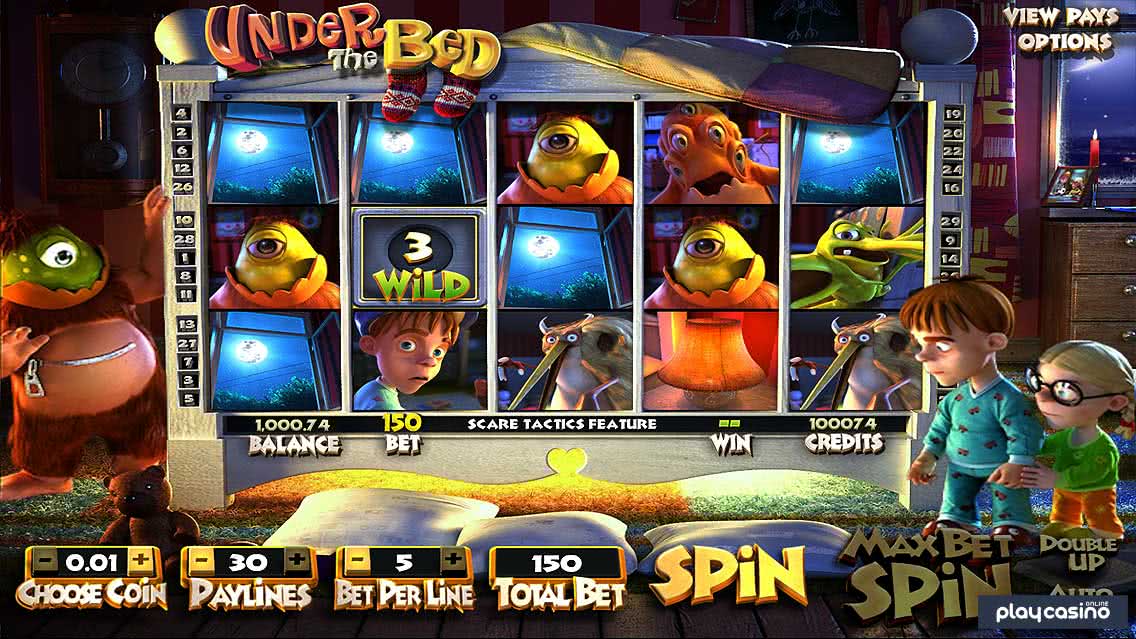 There are two main bonus features other than the sticky wilds in the Under the Bed online slot. The first of the two is about fighting the monsters that are under the bed. The bed symbol itself is a bonus symbol that activates this feature as long as you get a minimum of three of them anywhere on the game board. They do not have to line up on a particular reel, but all three (or more) do have to appear at the same time on the same spin to access the feature.

The setup for this feature is pretty straightforward. The kids Jesse and Jane will face off against different monsters, and the results of their battles will determine the sizes of the wins that you get. There’s a level of interactivity here, but it gives you a randomized result for all intents and purposes. Regardless, it’s still a very smart type of feature to use considering the theme of the slot, and the sizes of the prizes in this bonus feature are pretty strong as well. 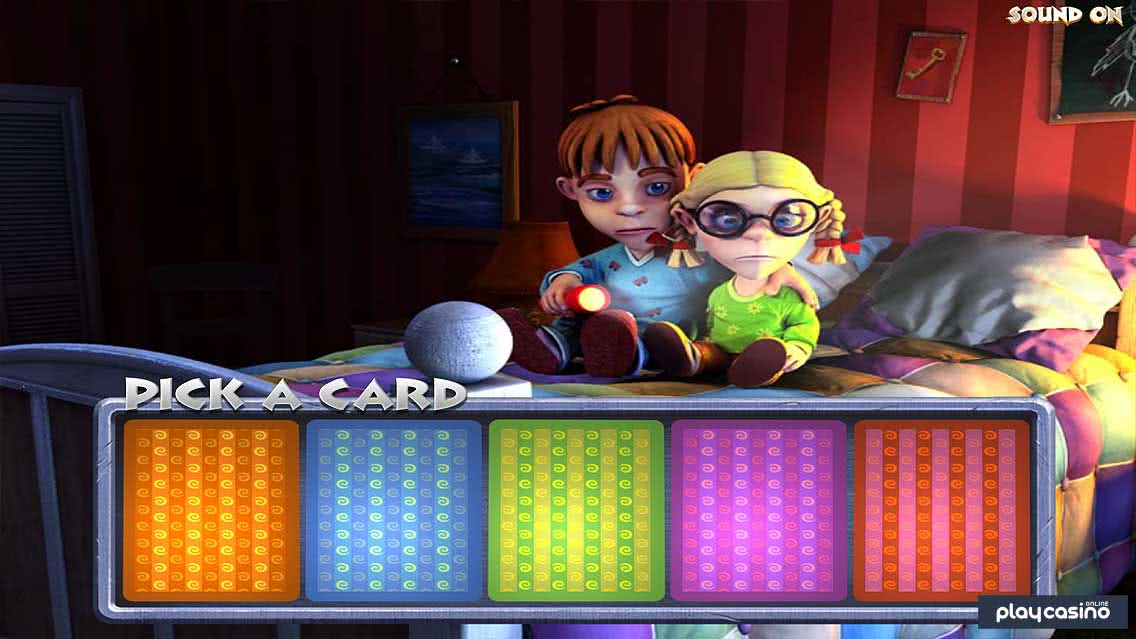 Other than under the bed, the most common spot for kids to be afraid of monsters is from within their closet. That’s why the closet door symbol was chosen to be the other bonus symbol in the Under the Bed video slot. You only have to get one of them to access the free spins, but it has to show up in the middle position of the middle reel. When this happens, you get 12 free spins in the special monster bedroom that has a different set of symbols that makes it easier to get higher level wins. 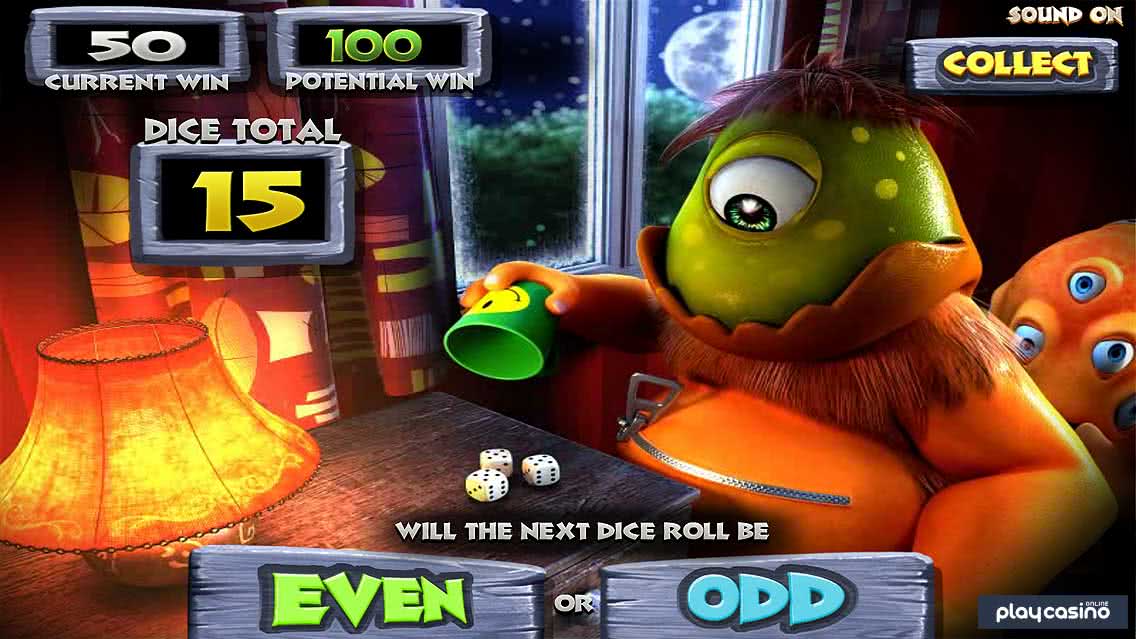 There are four symbols that make up the highest tier of wins in this game. The first is Jane, the little blonde girl with glasses, and she’ll pay out 500x for five of her on an activated payline. This is a reasonable top payout considering the limited volatility of this title. Up second is Jesse, and he pays you 400x when you get five of him on a line. Five of a kind of the parents, as viewed from under the bed (ie: from the waist down), get you 300x. The same 300x payout is yours for five of a kind of the one-eyed monster that looks a lot like a pear.

Other Payouts and Wins

Five other symbols give you wins in this game as well. It starts with the orange monster with five eyes, and he grants you a 200x win when you line up five. Five of the green monster that looks like a frog with a long nose earns 100x, and you’ll be rewarded with 75x for five of the bird monster. Finally, wins of 50x and 25x can be yours for five of a kind combinations of the lamp or open window with the moon shining in, respectively. 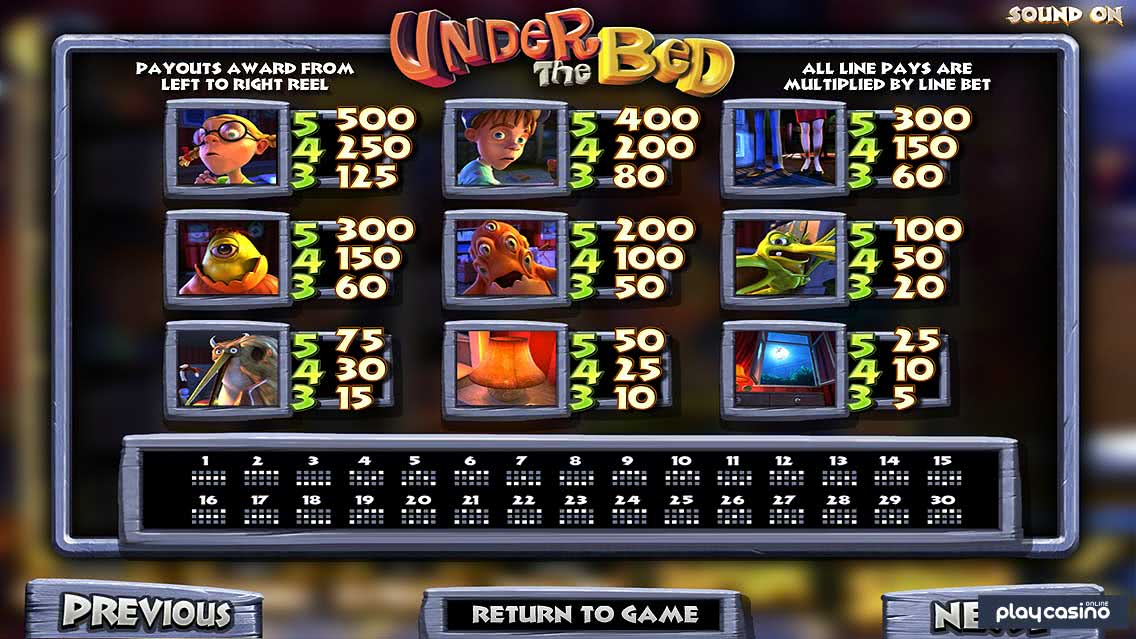 The popularity of the Under the Bed online slot by BetSoft comes from a few things. First, it has a good mix of features, especially with the atypical sticky wilds approach and the free spins feature only being activated by one symbol instead of matching up more. Second, the graphics and music are excellent. Third, the pay table is very balanced without a huge drop-off from the top prize. These things come together to create an experience that players have shown they enjoy quite a bit.