Under the Sea Slotmachine 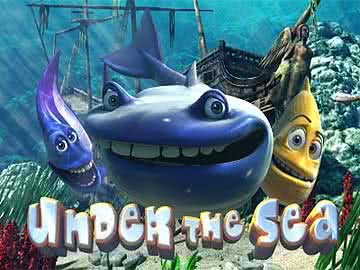 If you’re a fan of deep sea adventures, then you’ll love what the Under the Sea online slot by BetSoft has to offer with a fun ocean floor theme that offers up free spins with multipliers, wild multipliers worth up to 8x and a treasure chest bonus feature.

The sub-genre of slots that are centered around a deep sea type of adventure has a lot of games in it, and the Under the Sea video slot is a title by BetSoft that is a member of that number. What makes it stand out from the rest in this particular group is that the graphics are better than pretty much anything else you’ll find, and the feature set is stronger overall. When you add a balanced pay table to the mix and chances to get some pretty serious wins without lowering the overall hit-rate that much, then you get a really solid overall experience.

Play Under the Sea Slot for Free

Format and Layout of the Under the Sea Slot

To give players plenty of ways to get paid on each and every spin of this title, there are 30 paylines spread across a grid of five vertical reels and three horizontal rows. You do have the option to drop the number of paylines down from the maximum, but we think that this is typically a bad idea because it also drops the RTP down as well. This is the return to player percentage, which more or less determines the chances that you come out on top during your sessions. 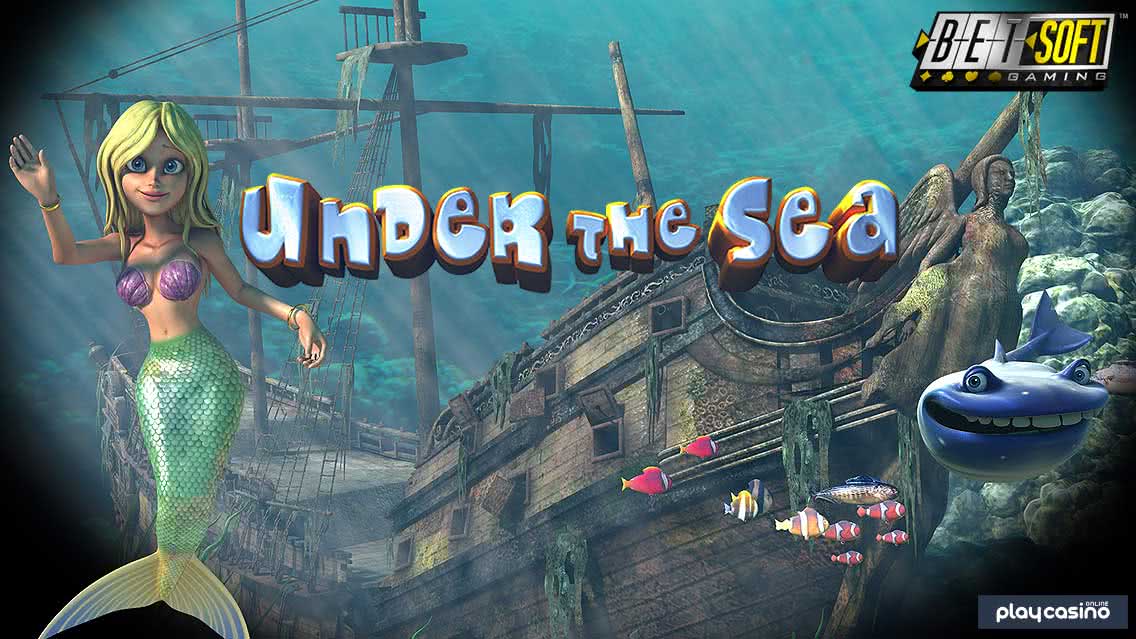 If you need to lower the bet size, then we think it’s better to use the number of coins per line or the size of the actual coins themselves. Players have the choice to wager between one and five coins on those lines, so with all of them activated, that gives a total range of 30 to 150 coins. The coin sizes can be set from $0.01 at a minimum to $1 at a maxium with several other options in between, and this gives players a total betting range of $0.30 to $150 per turn, which suits virtually all bankrolls for players who prefer all different levels of stakes. 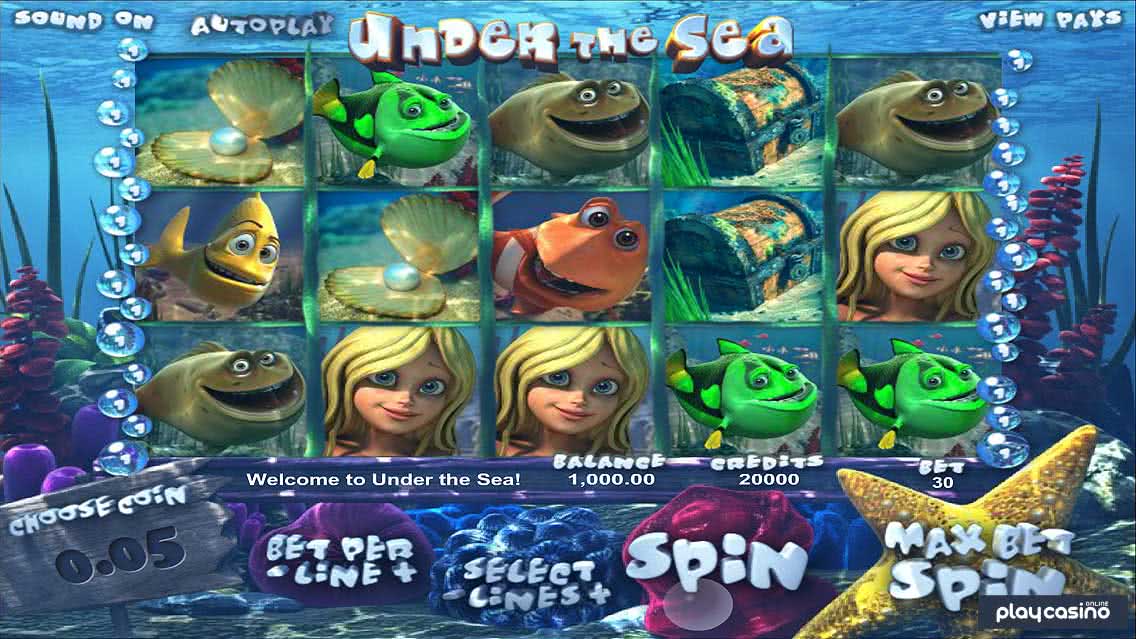 The Under the Sea video slot uses a style of wild multiplier that’s a bit different than what’s standard in the industry. The wild symbol itself is the clam with a pearl in it, and it appears on the second, third and fourth reels only in this game. Whenever you get them as a part of a winning combination on a payline, they act as a 2x multiplier to the total payout. However, getting more than one of them in the same line causes the multiplier to stack. One wild means a 2x multiplier, two wilds gets you a 4x multiplier, and an 8x multiplier is yours if you get three wilds in the same winning combination.

It’s pretty easy to see how an 8x multiplier can be very valuable, but don’t forget than the 4x multiplier opportunity is pretty substantial as well. Also, it’s worth pointing out that this wild does not substitute for the chest symbol or the sunken ship, both of which are bonus scatters.

The sunken ship symbol appears on all five reels of the Under the Sea online slot, and they can give you free spins or instant wins. Two of a kind, no matter where they appear, will give you a solid 60x payout right away, but it doesn’t award free spins. For three or more, you’ll be taken to a free spins bonus feature.

You’ll need to pick up ithree of these for eight free spins or four of them for a total of 12 free spins. If you get five of the sunken ship symbol, then you’ll be rewarded with a set of 15 free turns. No matter how many free spins you get, all of your wins are multiplied by a factor of two. Note that this can combine with the wild multipliers to give you total multipliers worth up to 16x, and that’s something to really pay attention to because it drives up the values of the payouts you’re getting tremendously. 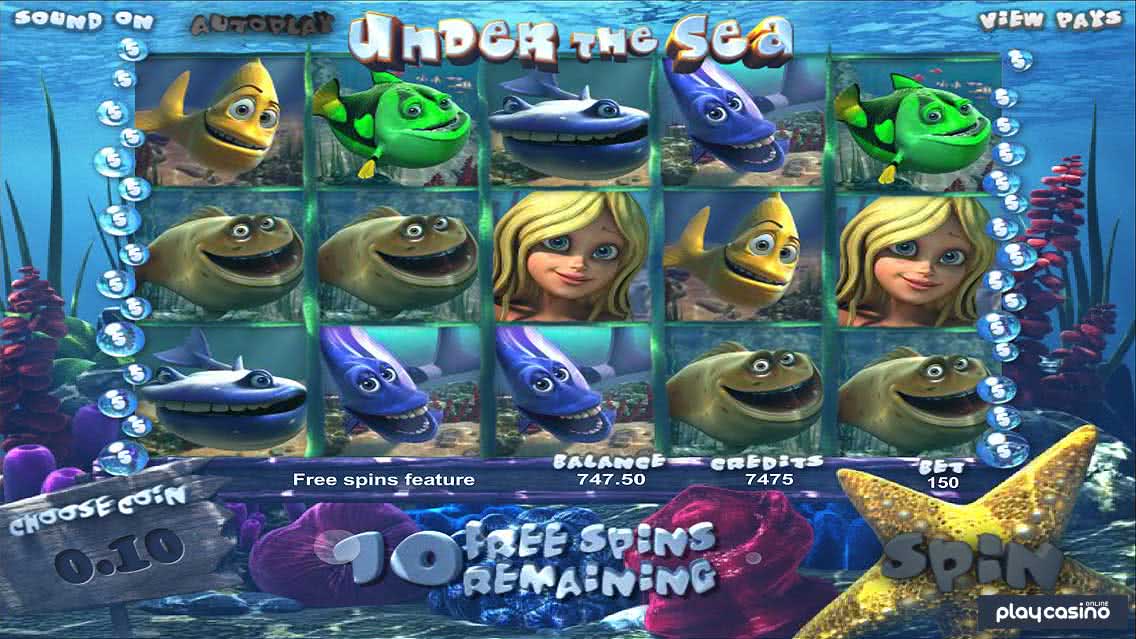 It wouldn’t be a good deep sea game without looking for treasure, and that’s exactly what you’ll get with the chest bonus feature. When you get three of the scattered treasure chest symbols on the reels at the same time, then you’ll be taken to a second screen with a number of chests to pick from. You’ll be given some number of picks, and each one you choose gives you an instant win. There are some pretty serious payouts that you can earn as a part of this feature, so it’s definitely something to get excited about when it’s triggered. 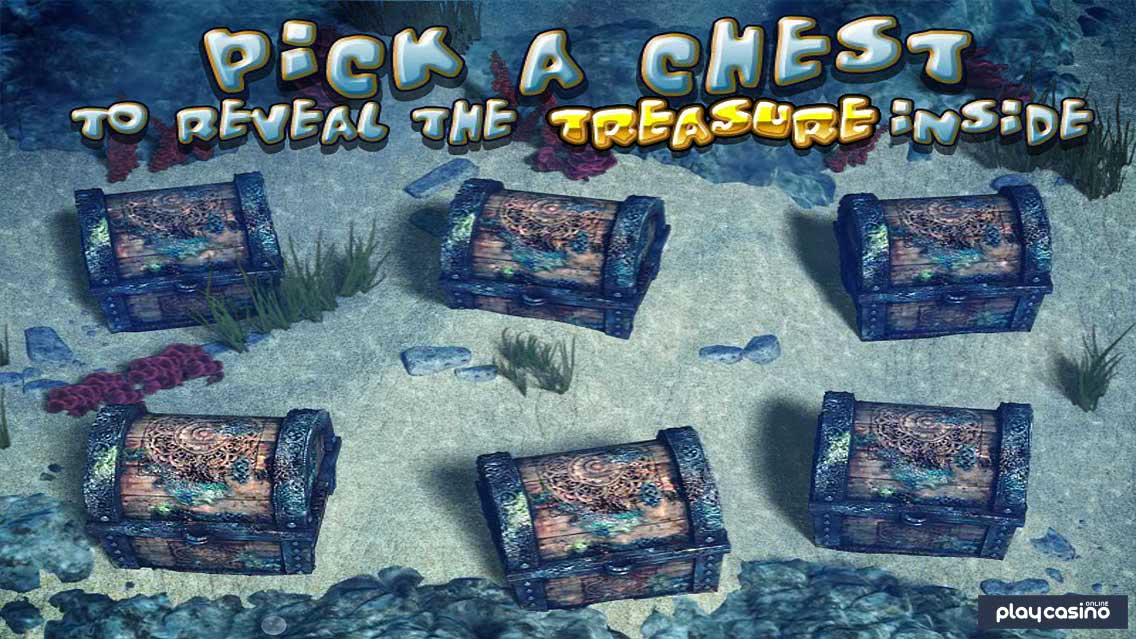 The Under the Sea online slot has three symbols that make up the top tier of pays. You’ll notice that there’s a mermaid on the symbols that’s the only paying symbol who isn’t a fish, and she’s the top symbol in the game with a 400x payout for five of a kind. Things drop down just slightly to the 300x level for five of the green fish, and then it drops down once again to 200x for five of the yellow fish.

Something to keep in mind with these three symbols is that they all pay for just two of a kind and up, so with the wild multipliers on the second reel in particular, you’ll have an increased chance of getting small wins. This helps to increase the hit-rate and decrease the volatility of the slot as a whole.

Other Combinations and Prizes

This leaves four other symbols that can give players winning combinations that are worth keeping an eye on. The blue fish pays 100x for five, and you can get 50x for five of a kind combinations of the red fish. When players land five of the grey or purple fish on the reels, they’ll be given 25x for five of a kind. Note that some of these wins might seem a bit on the small side, but with the stacking multipliers, they can still turn into some pretty tremendous payouts overall in spite of that. 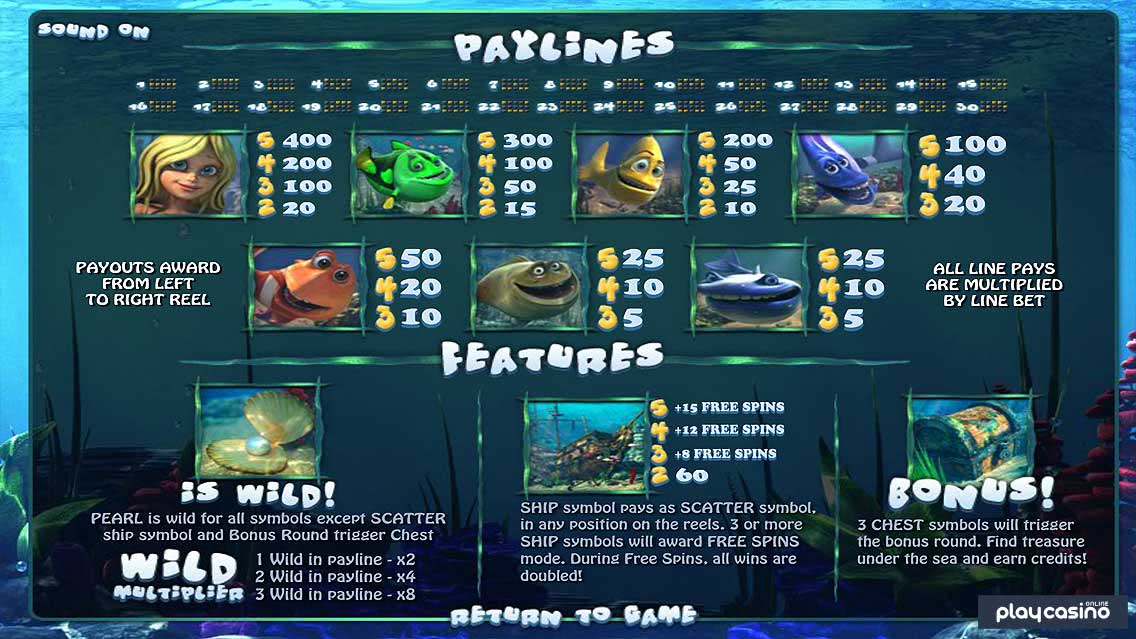 We’re well aware that there are a lot of slots out there based on a deep sea theme. However, the Under the Sea slot is one of the best in the entire sub-genre because of the combination of extremely strong graphics and really solid gameplay. On the gameplay point in particular, the balanced pay table combines with the feature set to give players an exciting experience each time they play.