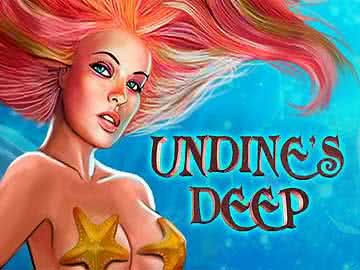 The Undine’s Deep slot by Endorphina has 10 paylines of underwater action down at the bottom of the ocean floor. You’ll see mermaids and other creatures from the deep with free spins with multipliers and wild multipliers in the regular game mode.

The Undine’s Deep video slot is a title produced by Endorphina that centers on the mythical and actual creatures of the deep sea. An undine is a mythical type of water spirit, and while they don’t necessarily appear here, other things like fish and mermaids do. This title by Endorphina has a very top-heavy pay schedule, so you’ll need to be ready for some fairly significant swings when you play. The common strategy for dealing with this is to drop down your bet size a bit from what you’re used to and play a little bit longer sessions, and that seems like a good strategy to use to manage the swings that come along with a game with this level of volatility.

Format and Layout of the Undine’s Deep Slot

The format of this slot uses five reels, like most video slots, and it also has three rows of symbols. There are 10 paylines available as a maximum, which is actually a little on the low side with how many lines you see in a lot of Endorphina’s other titles, but that allows for some much smaller bet sizes as well, so it’s a trade-off. There are also controls that can let you drop down to fewer than 10 lines, but that’s not advised because it also lowers the RTP, giivng you worse chances to win on average. 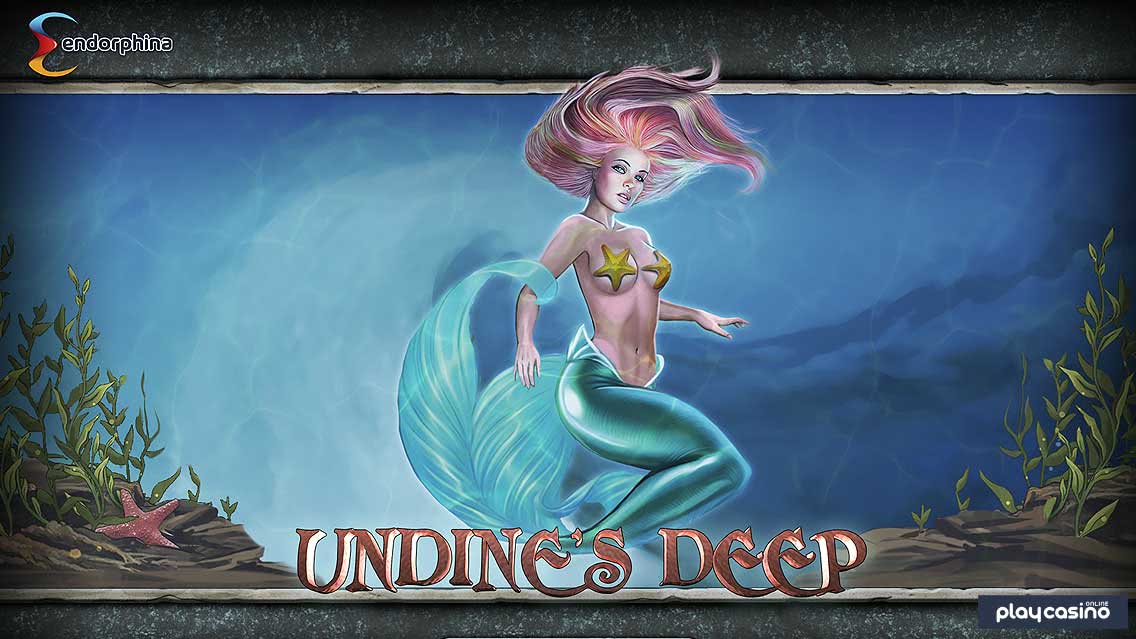 Betting is centered around how many coins you bet per payline and how much each of those coins is worth. You can wager as many as ten or as little as just one coin on each of the 10 paylines, and you can also use coins that go from $0.01 to $1 each in value. This allows for a whole lot of different bet sizes that start down at the $0.10 level per turn with all paylines activated. The maximum wager available within these bounds is $100 per spin, and you’ll rarely find players who want to play for that much or 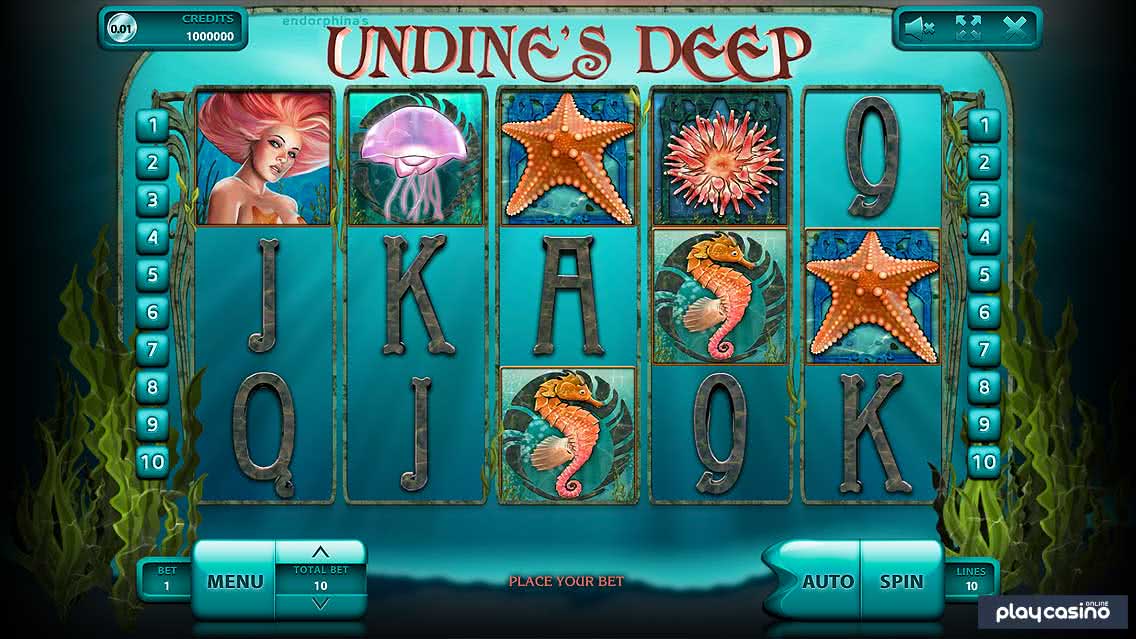 The golden goldfish is the wild symbol in this game, and he’s the only golden symbol that you’ll see in the Undine’s Deep online slot, so it’s pretty easy to keep up with. He’ll start you out with a 9,000x payout for five of a kind, which is the major jackpot in this slot. You can also pick up 2,500x for just four or 250x for three. Only two of a kind on a payline of this wild pays out 10x. These are obviously some strong pays for the top-paying symbol, but there’s even more to the value that this goldfish brings you on the reels.

Every single time this wild symbol is used to create a winning combination with other symbols, it doubles the value of that payout with a 2x multiplier. You’ll see that this isn’t the only multiplier in this game, and it can combine with the others to give you more opportunities to get paid in a bigger way. 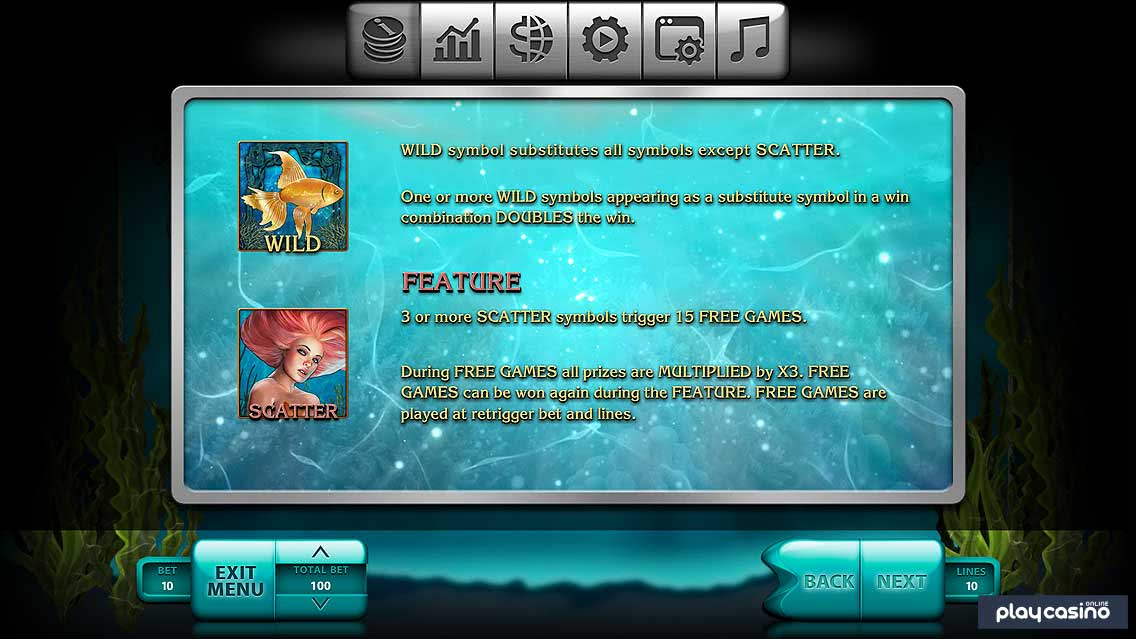 The Undine’s Deep video slot has a mermaid symbol with red, flowing hair, and she could be an instance of an undine as we described it above. Regardless, she appears on all reels as a scatter, and she’s responsible for some pretty significant payouts as well. Five of a kind, no matter if they land on a payline or not, will get you 5,000x. A win of 200x is yours for four of a kind as well. Payouts of 50x and 20x round things out for three-of-a-kind and two-of-a-kind combinations, and being able to get paid for just two of a scatter is a pretty big deal in a video slot like this one.

Free Spins Bonus Round With Multipliers

While you can get paid with two or more of the mermaid scatters, you’ll actually need at least three to activate the free spins bonus feature. You can re-trigger it as well by getting three during the feature itself, but you’ll be given 15 free turns at a time. That might not sound like a lot, but they’re worth a whole lot more than regular spins because all of your payouts are given a 3x multiplier in this feature. When that combines with the 2x wild multiplier from the goldfish symbol, you can get regular wins worth up to six times their normal value during this bonus round. 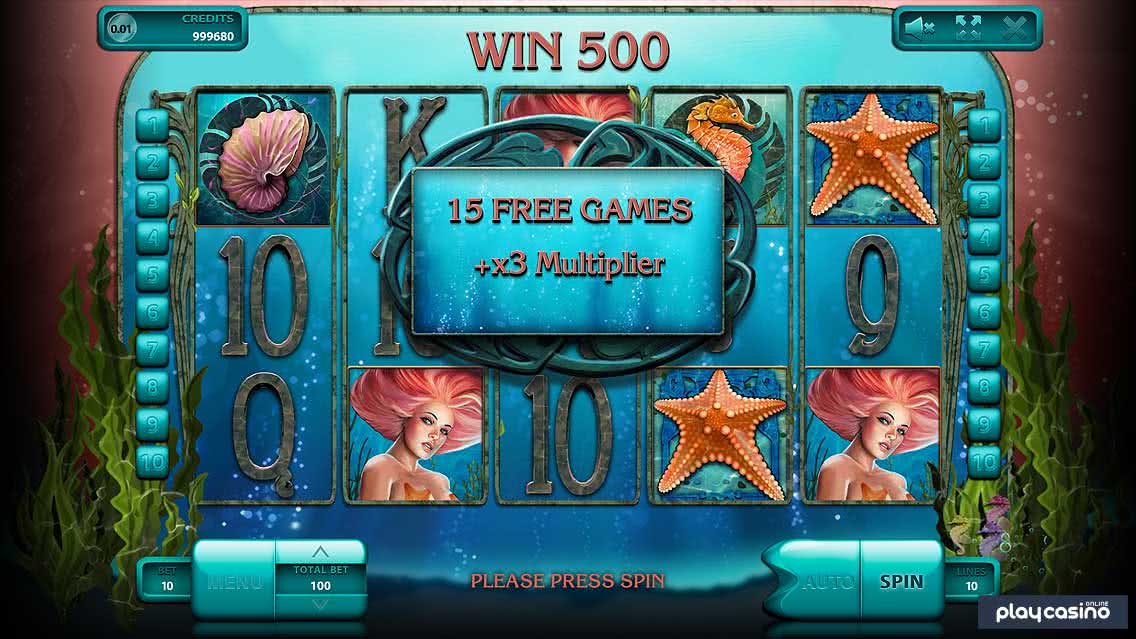 The Undine’s Deep online slot drops things down to a set of six different card rank symbols for the lower end of this game’s pay table. They all look like letters and numbers carved out of stone, which oddly enough fits in perfectly with the aesthetic approach of the deep sea theme in this title.

The A and K symbols are at the top end of this lot, naturally enough, and each of them will pay out 125x for five of a kind. The Q, J, 10 and 9 symbols all have the same payouts at 100x for five on an activated payline. Other than the symbols mentioned earlier, the 9 is the only other symbol that pays out for two of a kind. 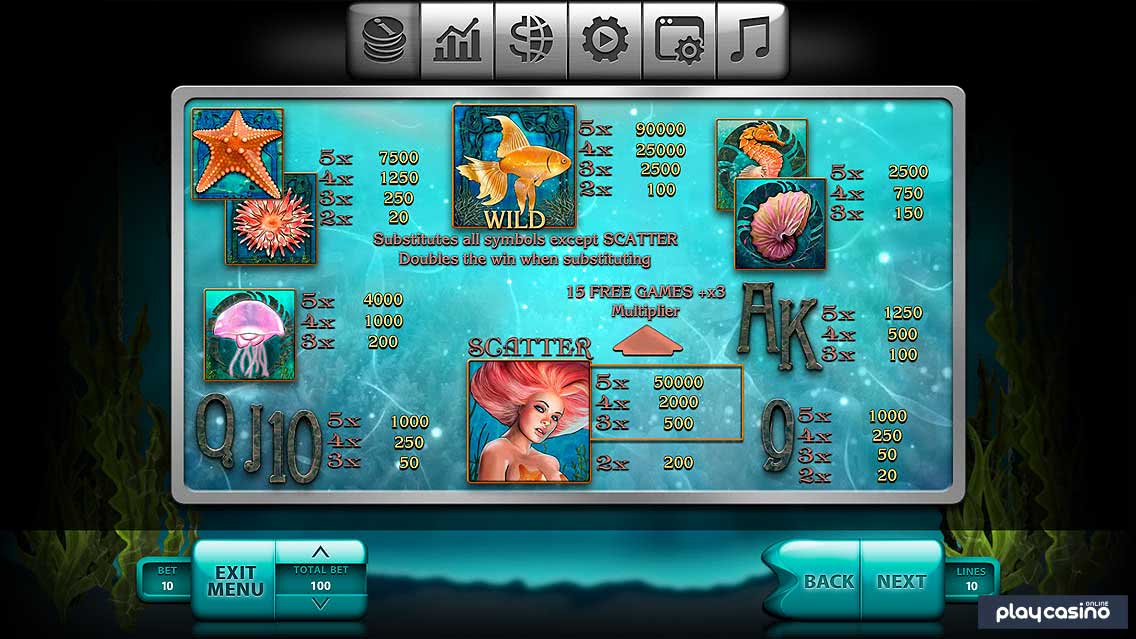 A part of the problem that some people have with modern video slots is that they tend to lean more to the side of a high hit-rate and low volatility. The Undine’s Deep online slot doesn’t really do that. Instead, it actually pushes towards having a higher volatility by really stacking the top-end of the pay table in a way that gives players a significant amount of swings while assuming that they can handle it. The combination of the wild goldfish jackpot and the value from the scatters and free spins mode really make it fairly easy to run up some serious payouts in this slot. That’s the kind of thing that a lot of players really love, and this is an important part of Endorphina’s portfolio as a whole in terms of bringing it out in the open.