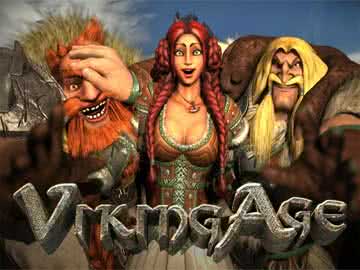 With excellent 3D graphics, the Viking Age video slot has 30 paylines with an arm wrestling bonus round, a free spins with multipliers on your wins and a special runestone doors feature with opportunities to score major wins.

Vikings were known for being an interesting group that would come up and pretty much just cause havok before leaving. The Viking Age online slot, a title produced by BetSoft, doesn’t have all of the mayhem, but it does have some of the best graphics that you will be able to find in any slot from any provider. The features and gameplay style centers around the action you’d expect from a title with this kind of feature, and that’s the sort of thing that has helped to keep it as popular as it is even though it’s a game that has been available for quite a while.

Format and Layout of the Viking Age Slot

The layout of a slot determines a lot of the gameplay attributes, and they wanted a game with room for a lot of action, so they used 30 paylines across five reels and three rows. The thing about those lines, however, is that they can be changed to smaller numbers. Doing so will hurt you overall by dropping down the return to player percentage, so we recommend that you avoid that. Instead, use the other options to pick a lower overall bet size if that’s what you’re looking for so that you can feel comfortable with the stakes you’re playing without putting yourself in a position to increase the house edge. 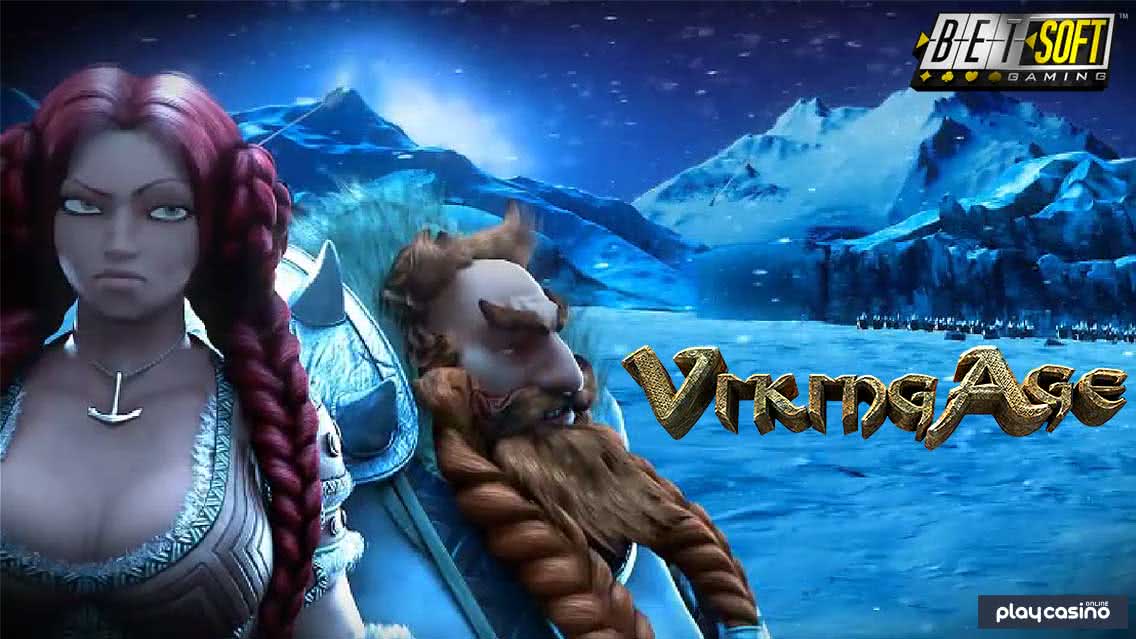 There are three rocks in the bottom-left corner of the screen, and the one on the far left helps you adjust your coin size by clicking it. It’ll cycle through various values starting at $0.01 and going up to $1 apiece. The next rock over changes the bet per line, which is based on a number of coins ranging from one to five. The third rock changes the number of lines, and you should leave that one alone. With just the first two rocks, you can pick bet sizes that go from $0.30 to $150 per turn. 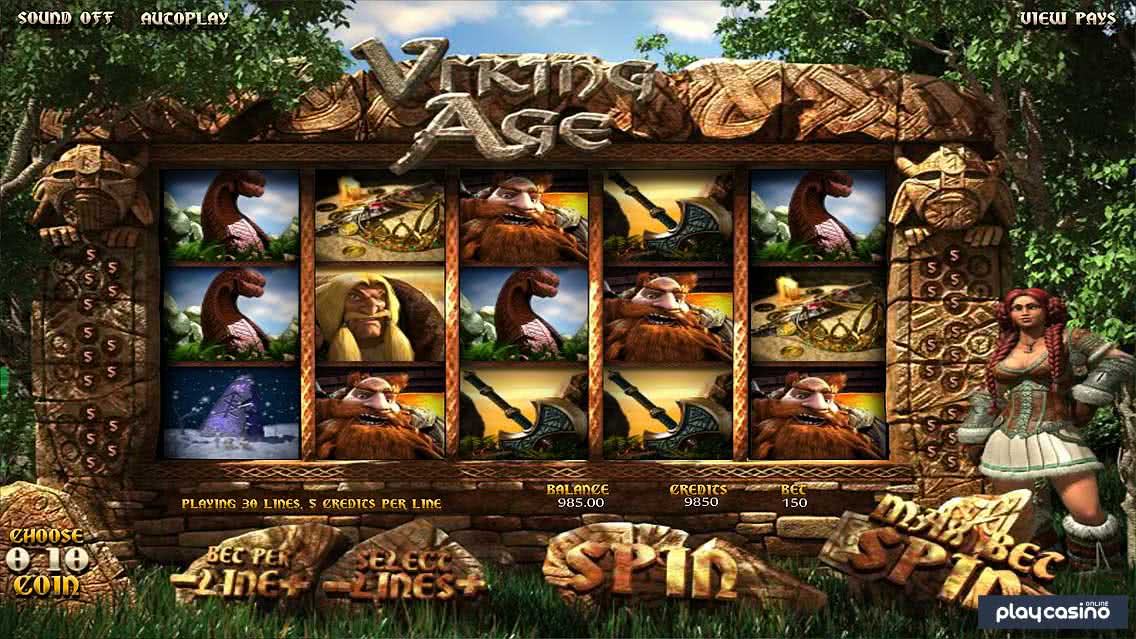 There’s a symbol that looks somewhat like a fox head, and when you get at least three of it, you’ll trigger the Runestone Doors bonus feature. This feature will open up doors on the reels and give the woman character on the side of the reels named Amma a chance to get you free spins, instant payouts or a free shot at the arm wrestling bonus feature.

We like this feature because it basically acts as a doorway to the other bonus rounds, which is a part of the idea behind the runestone door concept. We also like that you can just get an instant win and be on your way at the same time since that’s something that some players would prefer over playing a bonus round.

In the Viking Age online slot, the Amma symbol is the bonus symbol that will help you to earn a set of free spins. When you get her on the reels in at least three places, she’ll discover that there’s a multiplier spinner behind the stone structure that’s holding up the reels, and it gets rolled out.

You’ll get a random number of free spins between two extremes, and on each spin, the multiplier reels will also spin. If you get a winning combination that has the same multiplier on the front and back end of these multiplier reels, then your payout will be multiplied by that amount. You can earn multipliers that range from 2x to 5x with this feature, and those are some pretty serious wins that can be had. 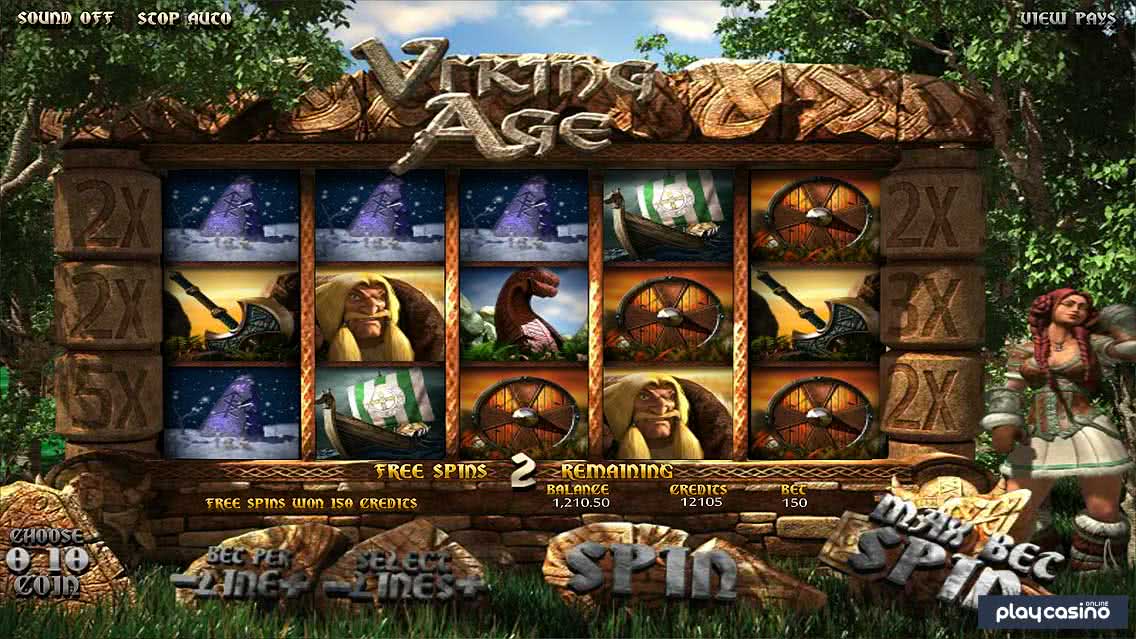 In the ultimate test of one-on-one strength, there is an arm wrestling bonus round that you can access inside of the Viking Age video slot. It’s easy enough to start this feature because all you need is three of the arm wrestling symbols anywhere on the game board to get going.

During this bonus feature, two different vikings will have it out in an arm wrestling match. You get to choose the side that you think will win. If your viking wins, then you get a larger payout than if he loses, but you’ll still get a prize either way. This is a fun way that they have tied the culture of these people into this slot, and it’s the sort of thing that helps the title have a cohesive feel overall. 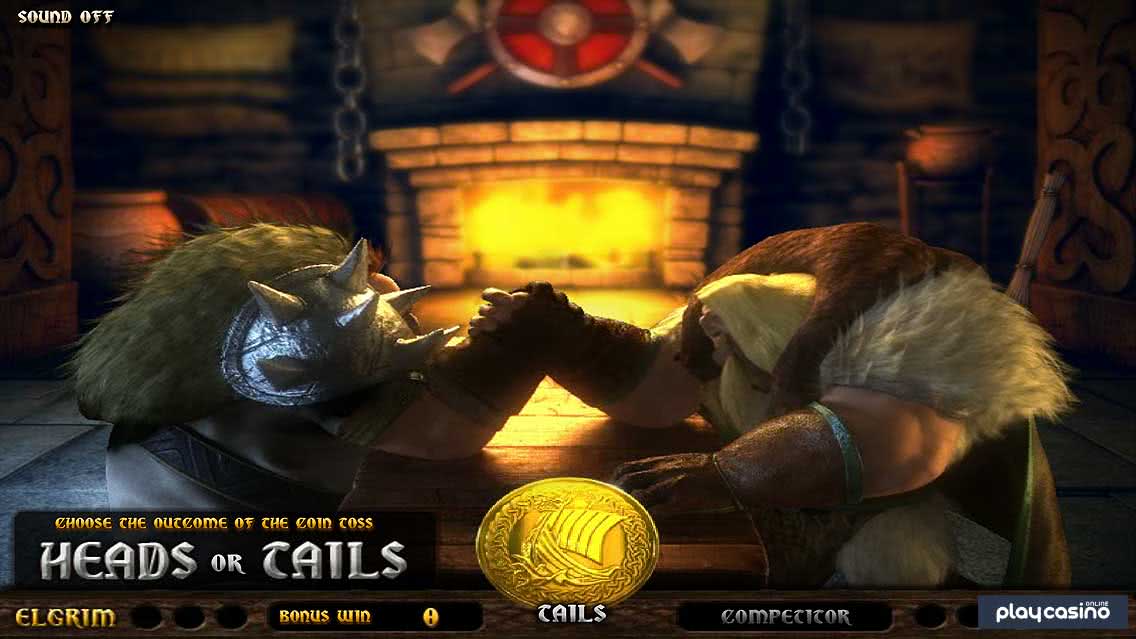 The same two vikings that are arm wrestling in this game appear as the two highest paying symbols in the game. It’s important to know which is which in this slot because they’re both responsible for some serious payouts.

The blond one is the higher of the two symbols. Five of a kind awards players with a 300x win, and four of a kind will still give you 150x, which is a reasonably high prize on this table. For the redheaded one, you can win 250x for five on a payline. Four of a kind gets a smaller, but still serious, win of 125x. Both of these viking symbols pay out for two of a kind or more.

Other Payouts and Prizes

Three other symbols make up the bottom tier, and they all need at least three of a kind to make a winning combination. You’ll score 100x for the helm of the longboat, which actually looks a lot like a dinosaur of some type at first glance. The snow scene gets players 75x for five, and when you line up five of the viking shield on a payline, you’ll be given a 50x prize. 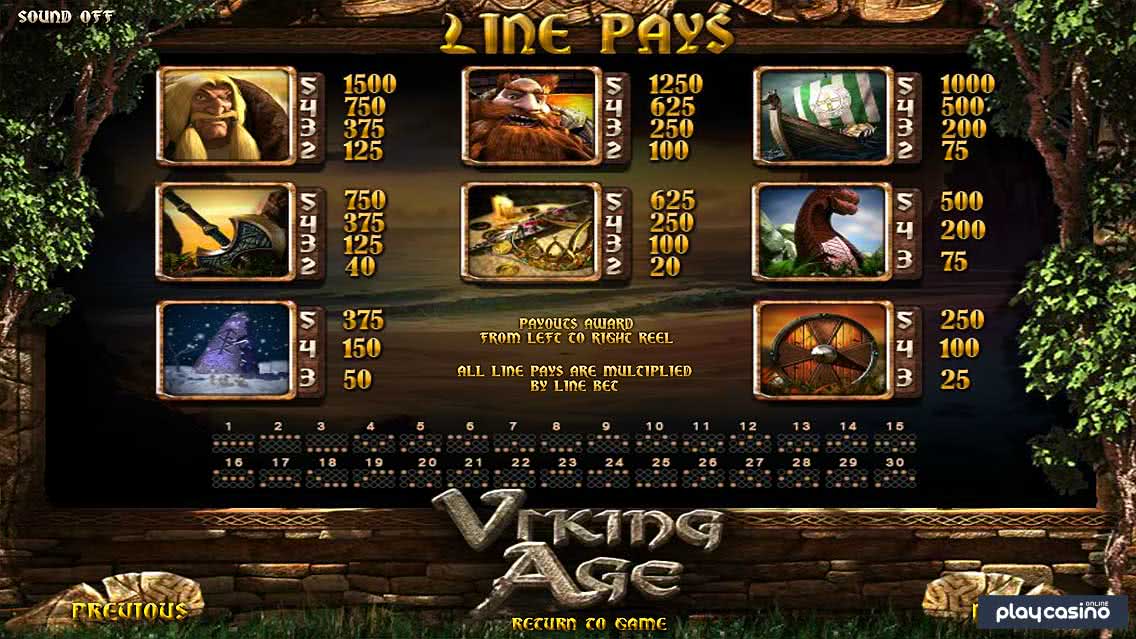 The graphics and gameplay of the Viking Age online slot combine to create an experience that players have seemed to want to come back to over and over again. It’s not just that it’s a title that looks great, but it’s also a game that is exciting because of how high the hit-rate is and how often the features hit. There are virtually no disadvantages to this game to mention other than how the bottom of the pay table is very small compared to most other games, but the volatility of the game is a large part of why that’s the case.