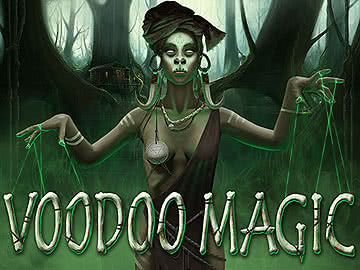 Voodoo Magic is a popular video slot by Realtime Gaming that centers around a voodoo witch doctor and her male guardian with big features and payouts.

The witch doctor-themed Voodoo Magic video slot by Realtime Gaming has an excellent visual appeal with graphics that are in the league of any of the best games you can think of in the industry as a whole. The graphical side of things isn’t the only place where this game stands out as the gameplay is solid as well, and it gives you something to get excited about on both ends of the experience. If you’re the type of player who likes games with spooky themes, then this is a title that will really satisfy what you’re looking for. While it may seem like it has a somewhat generic theme, the combination of great graphics and strong gameplay makes this one of RTG’s most popular titles.

Format and Layout of the Voodoo Magic Slot

Something experienced players and beginners alike will notice right away is that this slot has an atypical number of paylines. With five reels and three rows, the grid of symbols itself is as normal as it gets. However, 13 paylines leads to uneven bet sizes, which is one of the reasons why more even numbers are almost always used. With that having been said, the number 13 fits into the creepy witch doctor theme, and it’s enough ways to win to keep the game interesting without being so few that it’s boring.

The volatility is at a medium level in this game, and that’s important to point out for a few reasons. First, the way this volatility is composed is that there’s a ton of value in the free spins bonus feature, but the regular pay table is pretty balanced, and the hit-rate is also reasonable. It’s not too high and not too low, so you end up with a pretty smooth gameplay experience that doesn’t lean towards any particular extreme. This means that this slot appeals to a lot of different types of players, and that’s something that has contributed to its popularity quite a bit.

We also want to point out that you should keep all 13 paylines activated on all of your spins. This will give you the greatest RTP percentage overall, which means better chances of coming out on top by the end of your sessions. 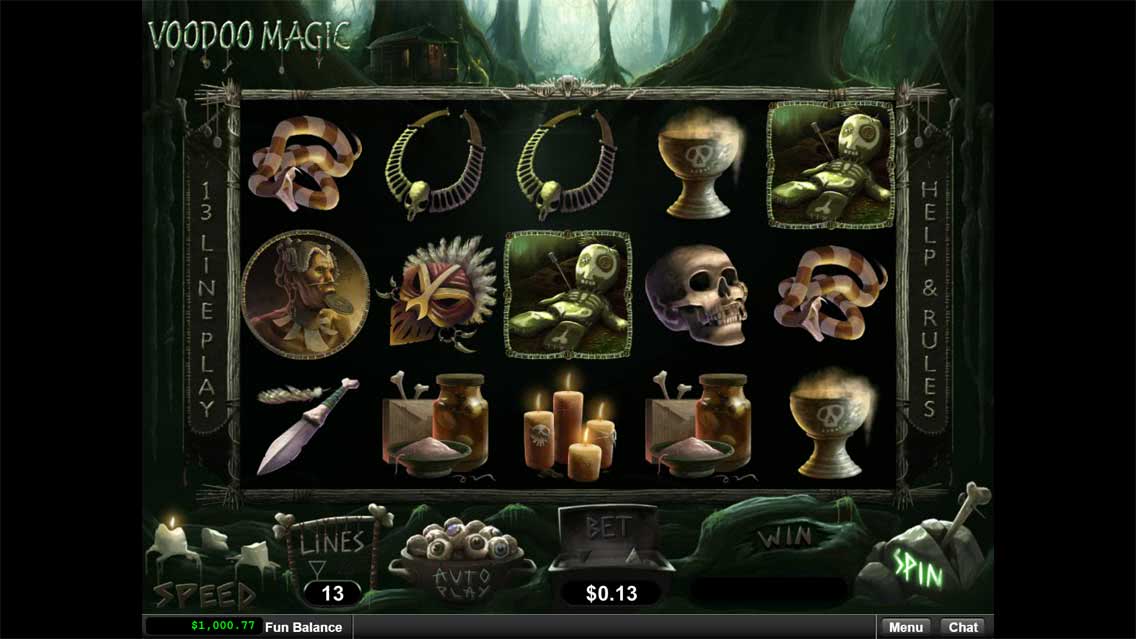 There is a priestess symbol that you’ll see on each of the five reels in the Voodoo Magic video slot. She has two large bone earrings, and she’s facing diretctly towards you with a large wrap on her head. She’s wild in this game, and she is also responsible for some pretty big payouts. It’s worth pointing out that she substitutes for everything but the scatter symbol, which we’ll take a look at below.

Five of a kind of this priestess wild symbol earns a win worth 2,000x. You can pick up a secondary jackpot prize for just four of a kind on any activated payline that comes in at the 1,000x level. Three of a kind is worth 200x, and two of a kind gets you 15x. However, if those two wilds would give you a better payout as a part of a three-of-a-kind combination (or greater), then it will count for the largest payout. The standard practice is used here where you are rewarded the single largest payout available on each individual payline.

One of the most popular elements of voodoo is the idea of the voodoo doll that can be used to control a person and inflict harm on them in various ways. There is a voodoo doll in the Voodoo Magic online slot that serves as the scatter symbol. It’s very important to note that this is a left-to-right scatter, which means you have to get them on consecutive reels from left to right in order to get payouts. However, it doesn’t matter which position on those reels the symbols land on.

Five of a kind of this symbol earns players a 100x payout that is multiplied by the total bet size. With all paylines activated, this amounts to a win that will be the same size as a 1,300x line bet payout, which makes it the second-highest regular win in the entire game. A payout of 10x is yours for four of the scatter, and you can also pick up 3x for three of a kind. A 2x win is available for just two of this symbol located on the reels as well, which makes it fairly easy to get a payout this way since you only have to get one on the first and second reels to get a payout worth twice the size of your total bet. 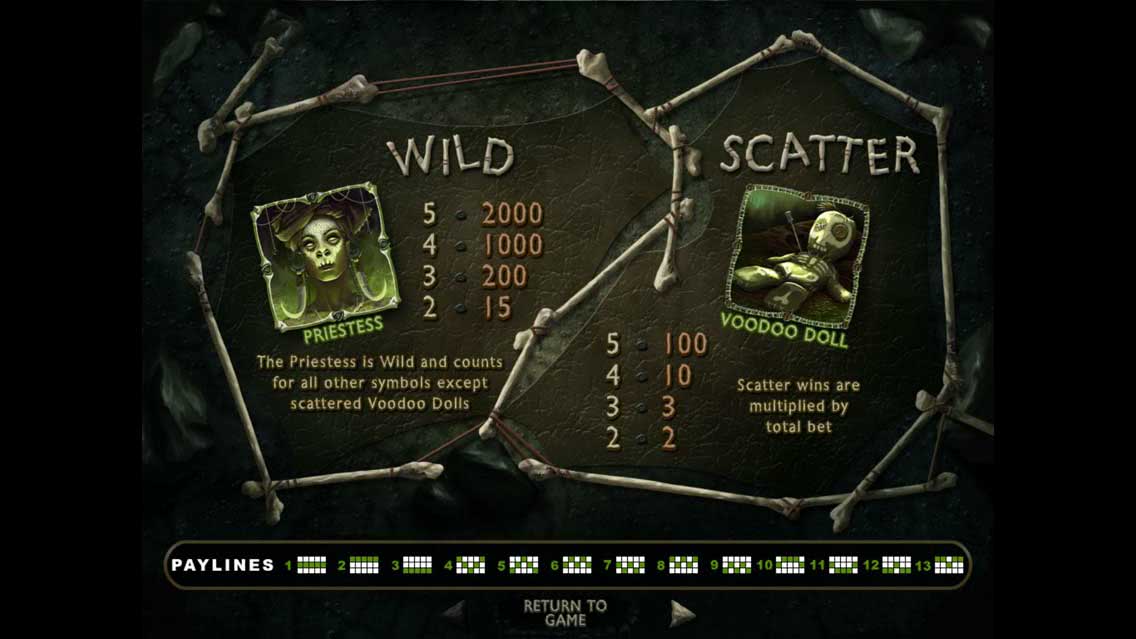 A pretty cool bonus feature that you’ll have available in this game is based around free spins. You need to get any payout with the scatter symbols to trigger this feature, and that means as few as two of them on left-to-right reels will get you a shot at this bonus round. You’ll get a random number of free turns, up to 25, and you’ll also have a chance for the Magic Multiplier feature to run as well.

The way the Magic Multiplier works in the Voodoo Magic video slot’s free spins bonus round is that you start with a 1x multiplier on the first spin, and it increases by one for every free spin remaining in the round. You will not have any voodoo doll scatter symbols on the reels during this bonus feature, so you won’t have an opportunity to re-trigger the feature, but this is a way to get a tremendous amount of value. 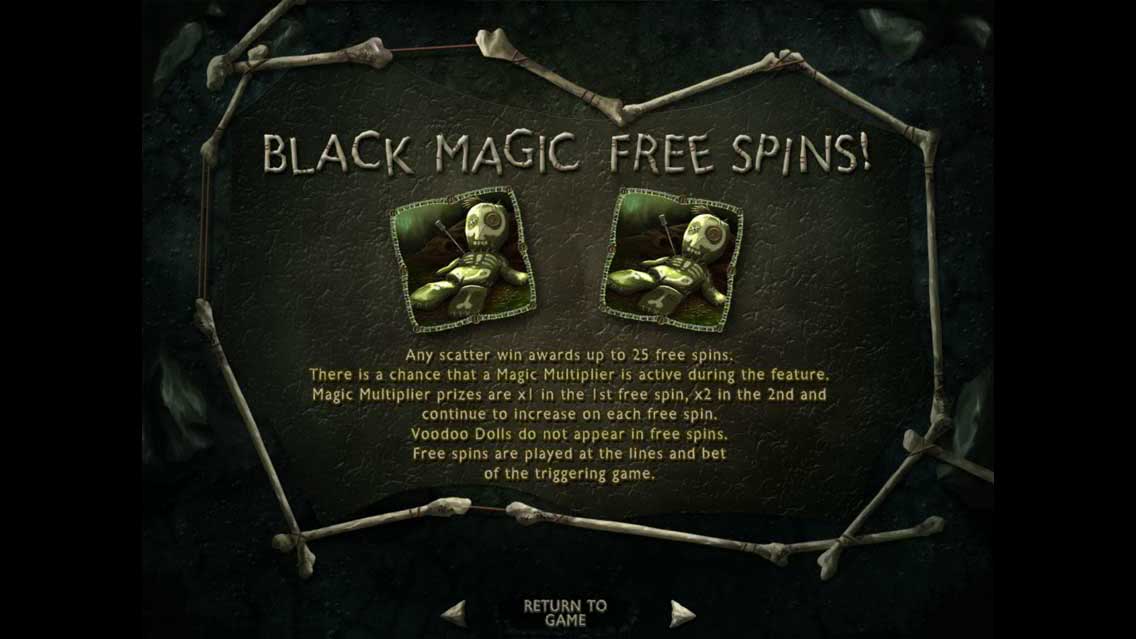 For the bottom level of symbols, you have six different symbols that all require three of a kind or more for a payout, and they come grouped into three pairs. Five of the snake or potion ingredients will get you a 250x prize. You can pick up 150x for five of a kind of the candles or the overflowing cup. Finally, you have a 100x win waiting for you if you’re able to line up five of the necklace or knife symbol on an activated payline. It’s clear that these symbols all fit the theme really well, and the fact that this game doesn’t rely on card rank symbols is a really good sign that Realtime Gaming put a lot of care into creating this game. 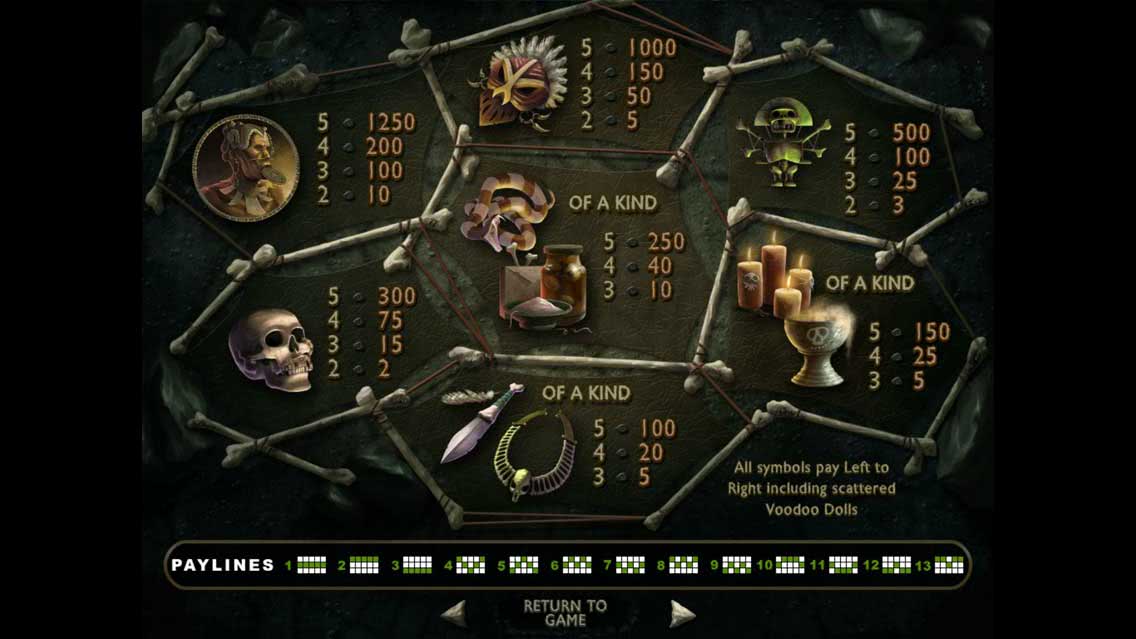 The Voodoo Magic online slot has the right combination of strong gameplay and graphics that create a level of popularity that cannot be ignored. This game has an interesting theme and a pace that’s fast enough to be engaging without being so fast that it’s intimidating. A lot of players are fans of this game, and it’s one of Realtime Gaming’s most popular for completely understandable reasons.