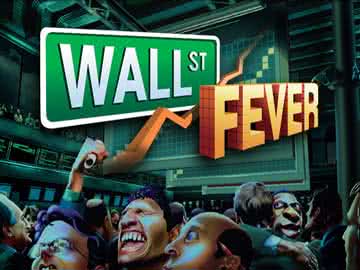 Wall St. Fever is a video slot by Playtech with an atypical five-payline format, free spins and a stock-based bonus feature.

The stock market is known for being gambling to a lot of people, so it’s a good fit for the theme of a slot. Playtech’s Wall St. Fever slot uses this theme, and it makes complete sense. The graphics of this game are decent enough, but you can definitely tell that it’s an older title. In spite of that, it’s remained popular because of its straightforward gameplay and a different layout than what’s usual that allows for particularly small bet sizes without a loss of RTP. 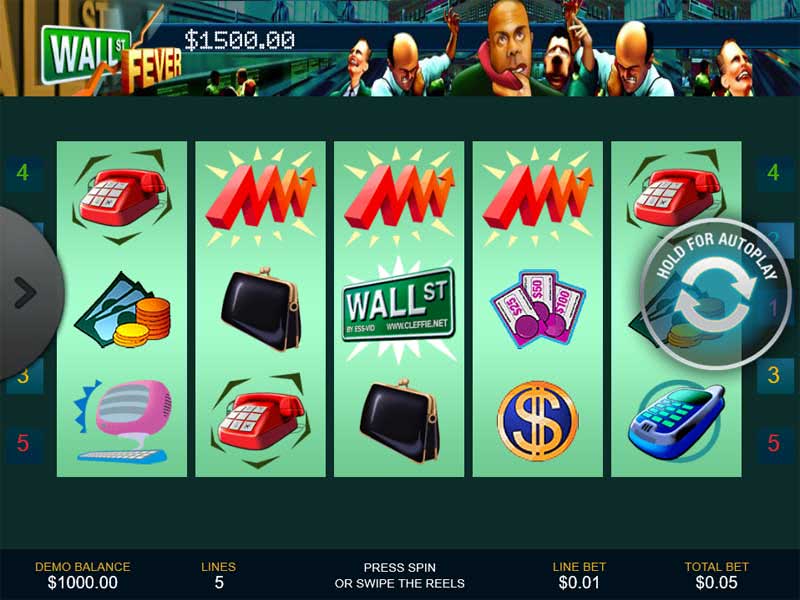 Layout and Format for the Wall St. Fever Slot

The layout of this game is an extremely important part of the overall gameplay and of why this title stands out among other Playtech-powered games. It uses five reels and three rows. So far, so good. However, there are just five paylines in the entire game. This means the format is like a video slot, but it actually plays a lot like a classic slot in the sense that you only have a few ways to win. On top of that, it plays like a video slot as well with a ton of features to mix up the gameplay.

You only have one coin size, and that’s $0.10. You can play on up to five paylines, and you should always play on all five to keep your RTP higher. The five of a kind wins are almost all larger with five coins than with one through four. This creates a situation where the only real bet size for this game is $0.50 a turn, which was a popular tactic at the time this game was created to keep a uniform bet size for all players.

The wild symbol in this game operates a bit differently than what you’d normally see. It substitutes for everything but the bonus and scatter symbols, which is normal enough. However, it only has one winning combination of its own, and that’s for five of a kind. Five of the wild symbol in the Wall St. Fever online slot gives you an absolutely tremendous payout of 100,000x.

That’s easily the largest static jackpot that you’re going to find in a slot anywhere, and it’s the main reason why this game has such a huge popularity. This is a $50,000 prize with a bet of $0.50, and that’s an enormous amount of money for such a small bet.

Your free spins don’t really get any kind of special value like they do in some other games. However, you can re-trigger them an indefinite number of times, which means you have chances for a whole lot of free turns in a row.

It wouldn’t quite be worthy of the Wall St. Fever video slot name without a stock-based bonus feature. There’s a red arrow symbol that is going up and down and up and down in a series of peaks and valleys. It’s the bonus symbol for the stock bonus feature, and it appears on the middle three reels only. Get all three of them on the screen at one time to trigger this feature.

The game itself is pretty straightforward and doesn’t require any skill or for you to do any real decision making. Just pick your stocks and hope for the best. You’ll get an instant payout based on a multiple of your total bet, which should mean a multiple of $0.50 for most players.

A bull market is when stocks are trending up, generally because the economy as a whole is doing well. It makes sense that the best-paying non-wild symbol in this game is an actual bull along these lines. It pays for two of a kind or more, and five of a kind of this symbol will earn you a solid 2,000x payout. You can win 300x for four of a kind or 50x for three of a kind also. Two of a kind gets you an 8x win too.

The Wall St. Fever online slot has four symbols in the middle tier of wins. The pink speaker and the briefcase both have the same payouts that start with 1,000x for five-of-a-kind combinations. There are also two types of phones, a land line and a cell phone, and they each get you 500x for five. All four of these symbols give you wins for two of a kind or more, and that means that a total of more than one-half of the regular-paying symbols in the game only need two symbols to line up to give you a win.

This leads to a higher hit-rate than most people would expect with only five paylines in this game, and that’s something that contributes to your gameplay experience in a serious way.

There are four more symbols that give you a lower level of payouts. We want to point out that the prizes for these wins are bigger than the lowest-tier pays for most other video slots, and that contributes to the volatility quite a bit.

The black wallet or pink money can get you 300x payouts when you line up five on one of the paylines. You can also pick up 200x for five of the dollar sign or the pile of cash. These four symbols need at least three of a kind to give you a win, but they’re the only symbols in the whole slot that only need three for a payout.

Wall St. Fever is definitely a different kind of game, and it stands out quite a bit. Playtech has some other video slots with just five paylines, but this is the one that has gotten the most attention over the years. The idea with titles like this one was for it to act as a transition game for people who were making the switch over from classic, three-reel slots. It serves its purpose well, but the huge jackpot and limited number of paylines have given it a niche all to its own at the same time.