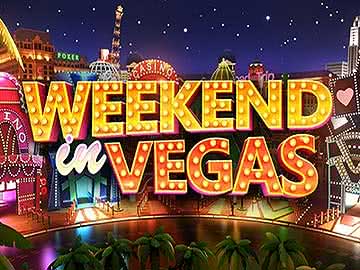 The Weekend in Vegas video slot by BetSoft is a 243-ways game loosely based on the same themes as the movie The Hangover. It features three different friends with diferent personalities who give you stacked symbols, free spins and other features.

The Hangover movie series was about a group of guy friends who come together for a weekend in Las Vegas that gets out of hand, and their different personalities create tensions that drive the plot forward. BetSoft’s Weekend in Vegas online slot is based on the same sorts of ideas with three different characters who have their own specific personalities. These characters show up on the reels with incredible 3D graphics, something BetSoft is especially known for in their Slots3 line (which this game is a part of). They’ve not relied on the graphics in this game, however, and there is a tremendous level of fun gameplay with a high hit-rate and a low volatility as well.

Format and Layout for the Weekend in Vegas Slot

The action in Las Vegas is fast and comes 24/7. The format of this game is designed to help give you the same fast-paced fun, and it starts with five reels and three rows with the all-ways layout. This means that you’ll have 243 ways to get paid on each and every spin, and this happens because all of the regular symbols act as scatters that pay from left to right only. They can show up anywhere on the reels, and as long as they appear left to right on consecutive reels, you’ll get paid. 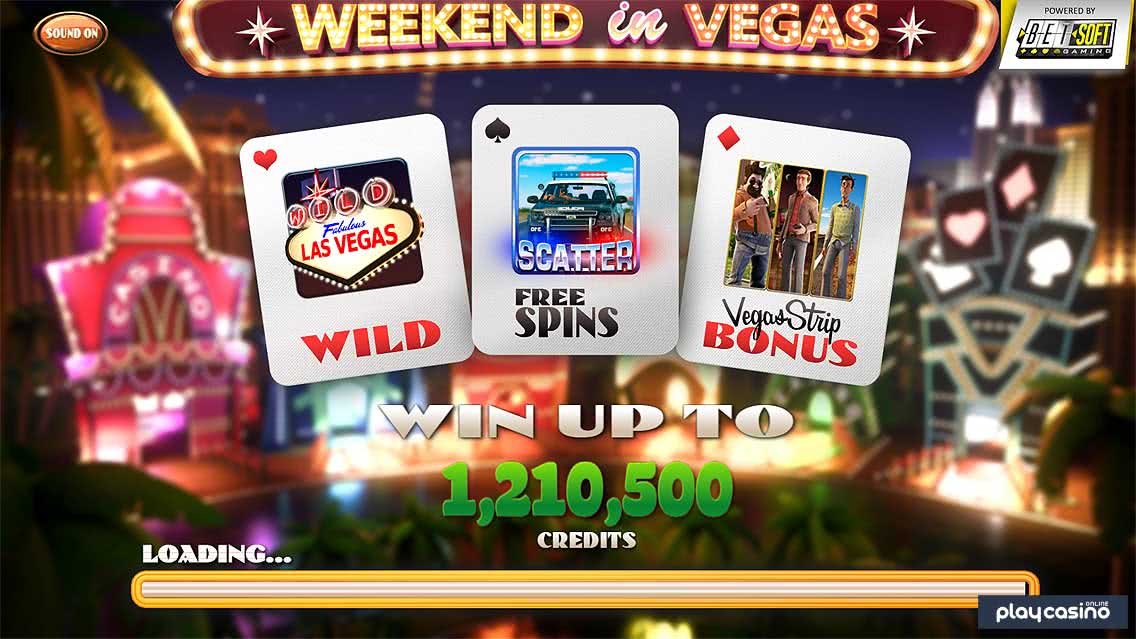 In terms of betting, you’ll be wagering 25 coins per turn. All of the wins are listed in coins as well, so a 250x win would be worth 10 times your total bet size. You can multiply this coin wager by up to five, and the coins themselves range in value from $0.01 to $1 apiece. This gives players a pretty substantial betting spread of $0.25 to $125 per turn. Every single player from those who prefer penny stakes to the rare high rollers will have sizes available that fit what they are looking for in their experience. 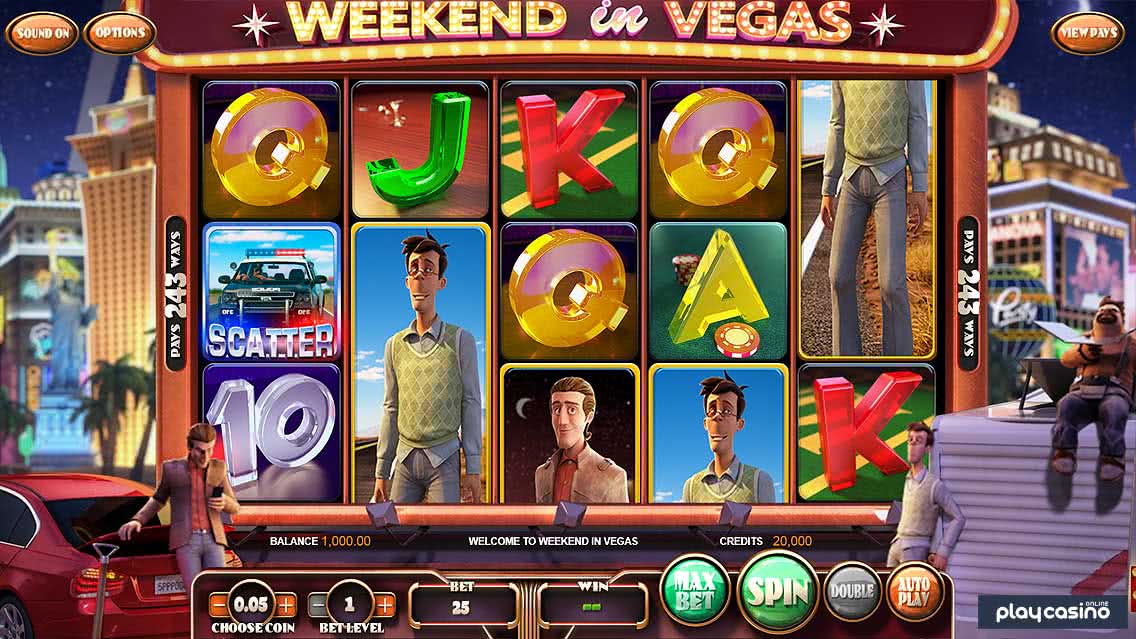 There are three main characters to the story of the Weekend in Vegas online slot, and they all show up stacked three symbols high in this game. Loony Larry is holding a green bottle and has a brown beard with sunglasses. Balanced Ben is wearing a red shirt with a brown coat and is holding his phone. Cautious Chris is wearing a green sweater vest with glasses.

All three of these symbols have the same payouts. It’s 35x for five of a kind, 20x for four of a kind and 5x for three of a kind. What’s really cool about these symbols is that they pay out a lot better than they seem because they show up stacked, so you can end up getting paid several times for the same combination on the same spin just depending on how the symbols fall. This takes advantage of the action-oriented all-ways format. 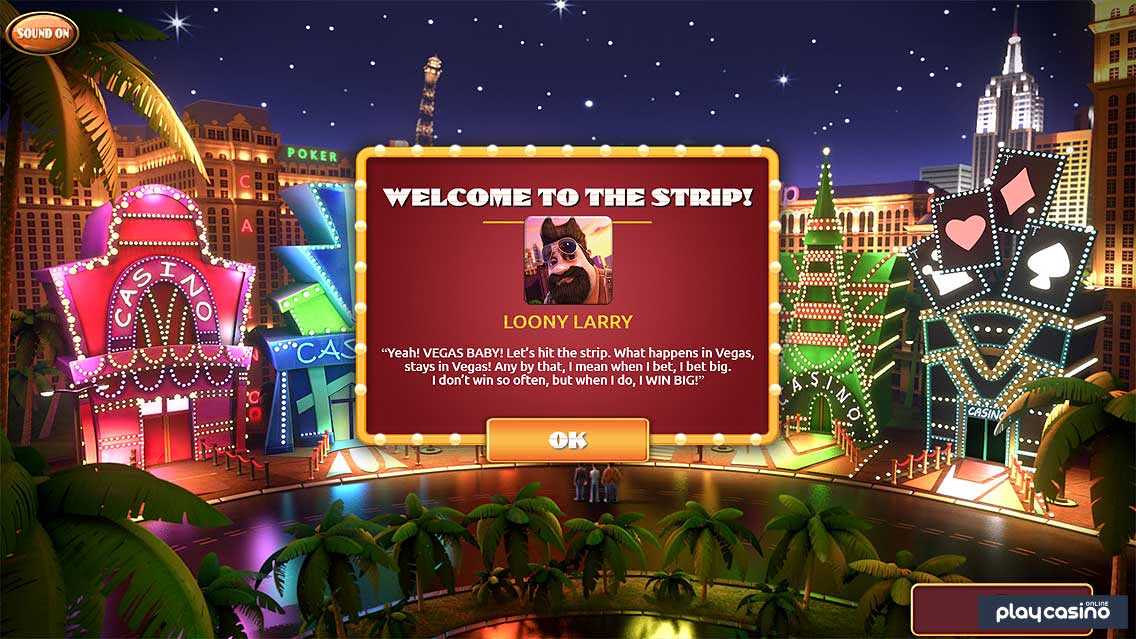 The iconic Welcome to Las Vegas signs are the wilds in this game. They substitute for everything but the wild police cars, but they only appear on the second and fourth reels during the regular game. They also show up on the third and fifth reels during the free spins mode to give you extra value. These wild symbols make getting wins even easier, but they are particularly helpful with the stacked character symbols that we noted above. 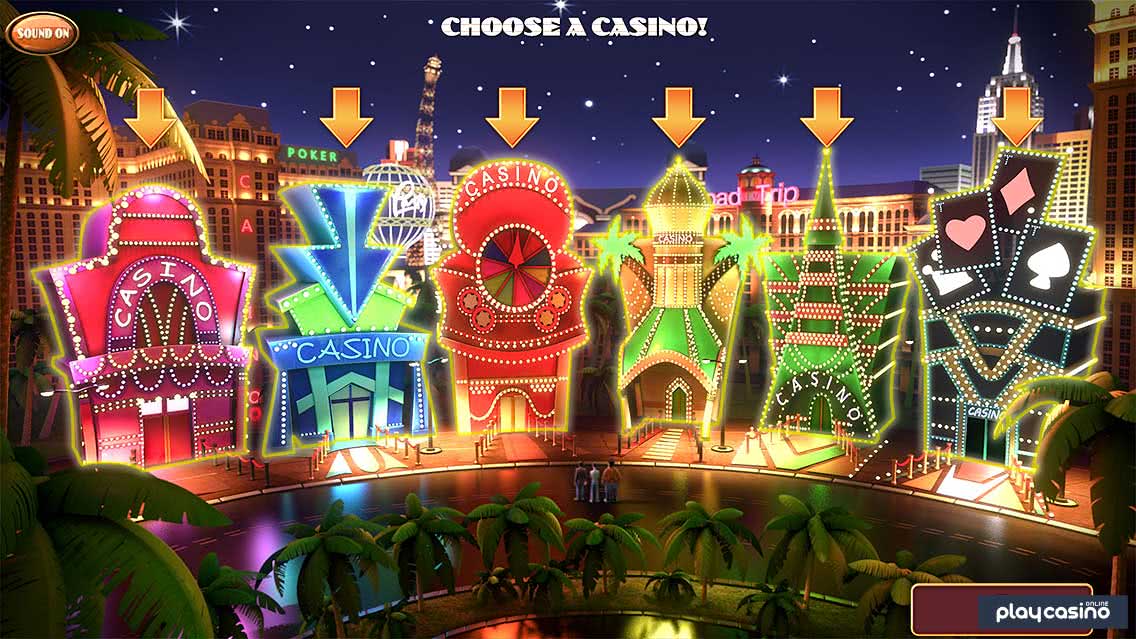 The police car is the scatter symbol in this game, and it’ll pay you for two of a kind or more anywhere on the game board. You can get 250x for five of a kind, which is a strong win overall, but you can also get 125x for four. The wins are 75x and 50x for three of a kind and two of a kind, respectively. While these can show up anywhere on the reels to give you payouts in the Weekend in Vegas video slot, they only give you free spins for three of a kind or more. 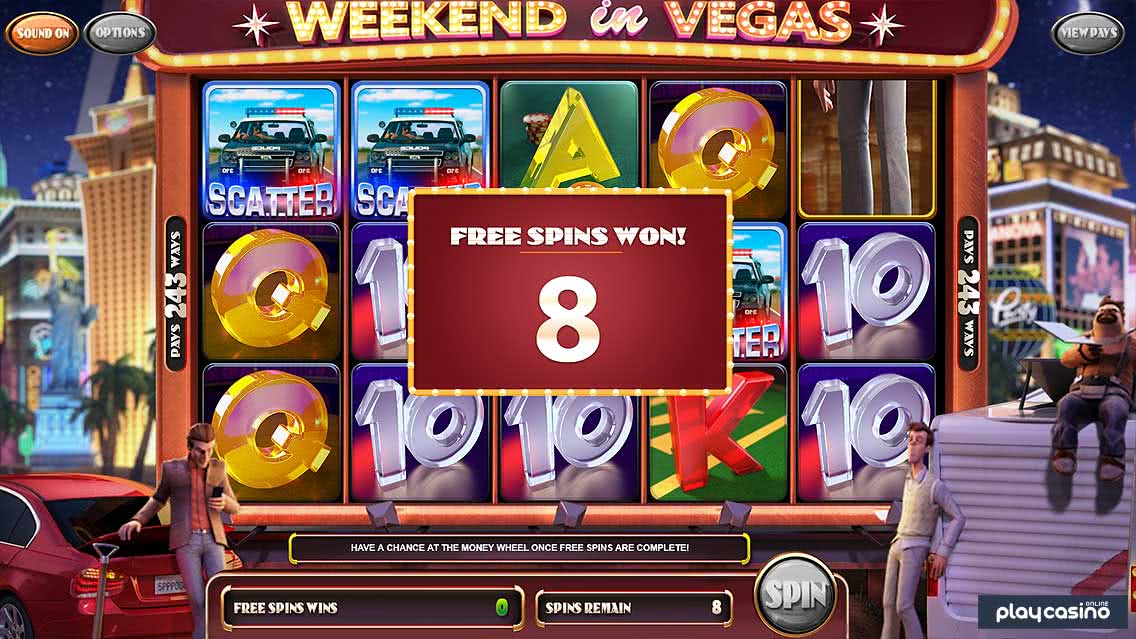 After you finish the free spins mode, you’ll get a shot at the Money Wheel feature. This draws some inspiration from roulette without being an outright copy of it. This wheel in the Weekend in Vegas online slot consists of three circles, and you start on the circle on the outside. You can get payouts of 300x or an arrow, and an arrow gives you a spin on the next one in. You can pick up 2,500x on the middle wheel or 5,000x if you land another arrow to make it to the smallest wheel. These are the largest payouts available at one shot in the whole game, so they’re pretty important. 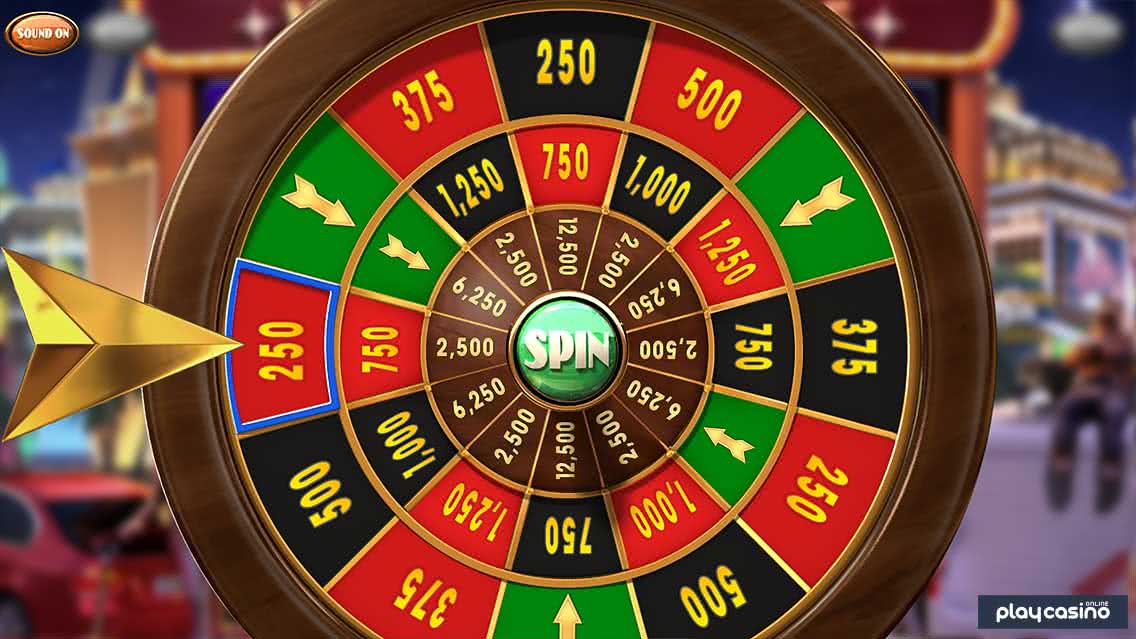 If you get three reels (or more) with the same character filling the reels, then you’ll get a bonus feature. Up to four re-spins will be given with the other reels spinning to give you extra chances to win. Your volatility of the wins will be determined by which character you have. This is a fun feature that doesn’t come up a lot, but when it does, it takes full advantage of the format of the game. 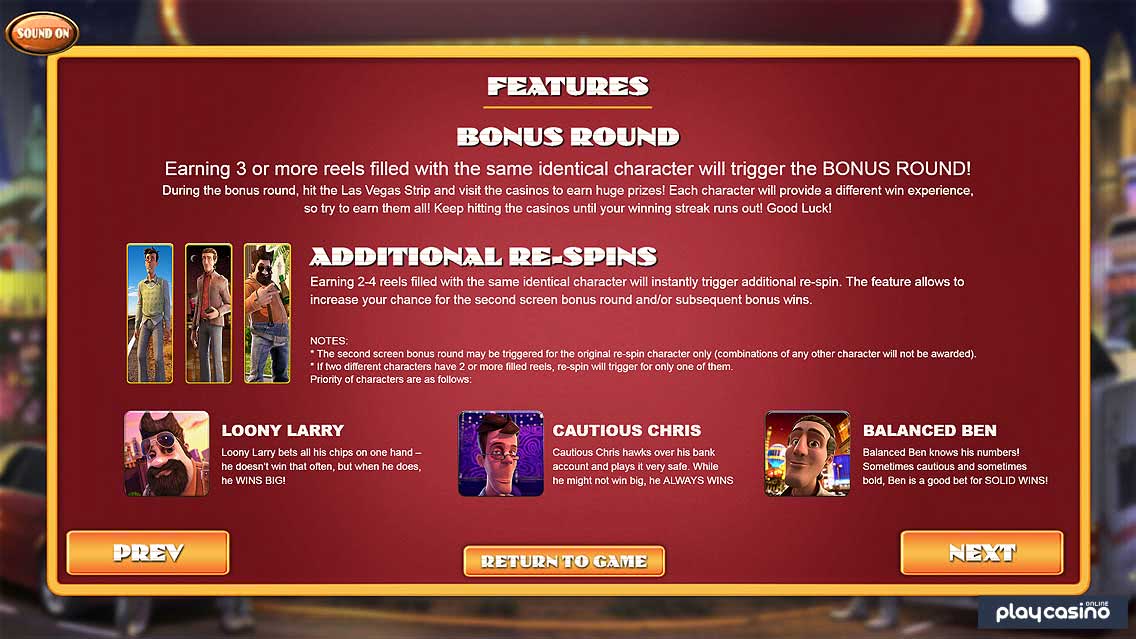 Aside from the scatters and character symbols in the Weekend in Vegas online slot, there are six other symbols that provide solid payouts. The first is the bottom half of a stripper on a pole, and she gives you 300x for five of a kind. You can line up five of the yellow A symbol to get 200x as well. The red K and yellow Q are each worth 100x for five, and five of either the green J or the white 10 pays 60x. 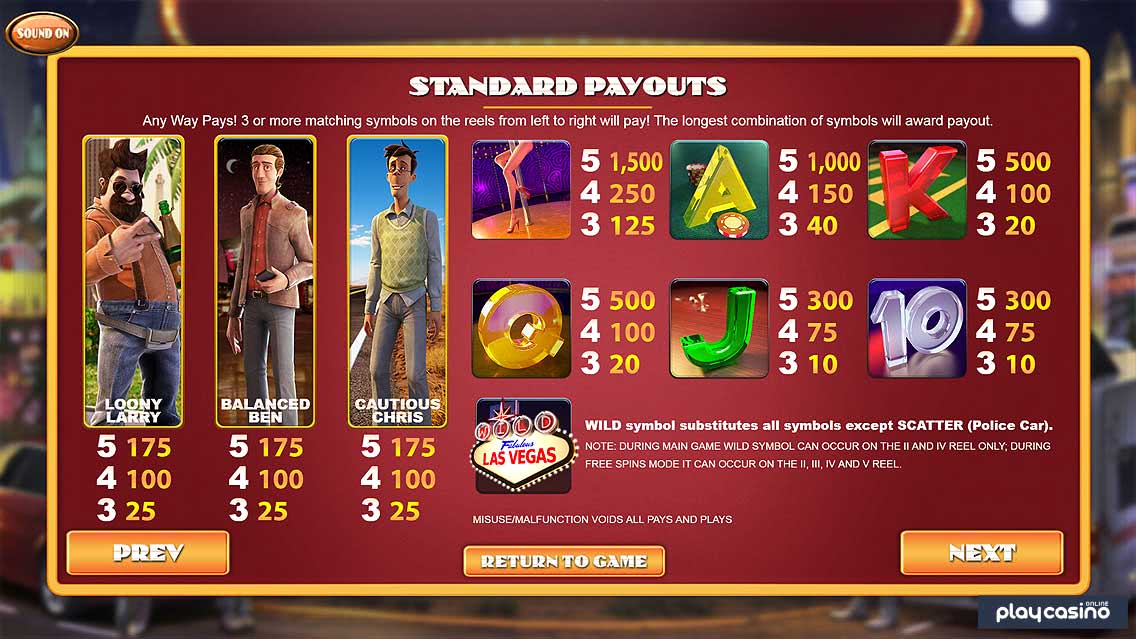 The Weekend in Vegas video slot is popular because of the combination of strong features, excellent graphics and solid overall gameplay. The balanced pay table as a whole is an important part of this, particularly with the distribution of the pays for the stacked symbols and how they rely on getting paid repeatedly for the same combination on the same spin. As a whole, it’s very understandable why this is one of BetSoft’s most popular titles, and no one can deny that it brings a lot to the table. The only real potential disadvantage is that some players may not like the theme, but that’s a small matter since a game doesn’t have to appeal to every single person to be a big hit.