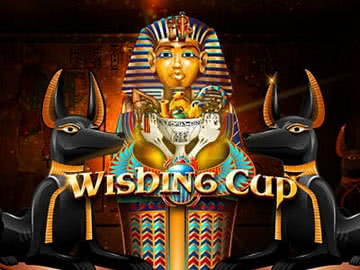 The Wishing Cup slot by Rival Gaming has 25 paylines and is based on an Egyptian theme with expanding wilds, free spins and a secret passage.

Lots of different software developers have built games based around Egyptian tombs, pyramids and mythology. There’s a lot of depth in the stories that make up this combination, and The Wishing Cup slot by Rival Gaming is an example of using these themes in a way that creates a solid basis for a game. You’ll find that the graphics are solid as well, and the gameplay is pretty good, and they both come together to give players a lot of action.

Format and Layout of The Wishing Cup Slot

Rival Gaming took a bit of a no-frills approach when it came to the format of this slot. They used five reels and three rows to create a typical 5×3 grid, and then they added 25 paylines across that. The volatility of this game is squarely in the middle of the road, so there will be some swings, but they aren’t too severe.

Betting has been made pretty easy, but there are multiple options to let you really narrow things down to the bet size you want. You can play with fewer than 25 paylines if you want, but be warned that it will lower your RTP percentage and hurt your payouts. Otherwise, players can bet between one and 10 coins per payline with coins that range from $0.01 to $0.25 each. The minimum bet size is $0.25 per turn, and the maximum is $62.50. You’ll be hard-pressed to find players who will not be able to find bet sizes that they are comfortable with when it comes to the large number of different options within this range.

The silver cup is the wild symbol, and it’s The Wishing Cup slot’s namesake. You’ll find wilds on the first, second, third and fourth reels in this game. Since they can’t be found on all of the reels, they do not get their own payouts. However, they will help you to get a lot of extra wins you would not have received without them.

One reason they are so useful is that they are partially expanding wilds. Whenever one shows up on the reels. It will expand upward only to give you extra wilds. The means any wild on the bottom row expands to cover the entire reel, and any wild on the middle row will cover the middle and top symbols on the reel. Wild wishing cups on the top row will not expand at all. This adds some variety to the typical expanding wild concept.

During these free spins, you will not be able to re-trigger the feature. However, the entire third reel will be wild for all of your free spins, and that gives you a good bit more value than you would receive during the regular game mode.

This game is set inside of King Tut’s tomb deep within a pyramid, and you’ll have a chance to find secret passages inside of this tomb from time to time. They appear during the regular game mode only, and you’ll see the symbol of the Eye of Ra whenever they’re going to show up. When you take a secret passage in this tomb, you’ll have a chance to pull up some pretty good instant win payouts as you find hidden treasure. This feature doesn’t have much interaction, but it does give you a good value, and it fits in really well with the overall theme of the slot.

There are four symbols in this game that really fit the Egyptian motif. The crossed knives pay out 600x for five of a kind. You can win 400x for five of the golden scarab that looks like a beetle. Players will also have wins for 300x for five of a kind of the whip and cane, and you’ll get 150x for five of the ankh, the symbol that looks like a cross emblem with a loop at the top. Each of these four symbols are important because they bridge the gap between the lowest-paying symbols in the game and the jackpot symbols, and this helps to keep the volatility under control by providing you with plenty of reasonable wins while you hunt for the higher-end payouts.

The aspect of The Wishing Cup online slot that really changes up the gameplay is the fact that the three highest-paying symbols in the game are all scatters. King Tut himself pays 2,000x for five of a kind, and because they’re scattered, they can be located anywhere on the reels and do not have to be on any single payline.

Along these lines, you can pick up 1,500x for five of the jackal or 750x for five of the bird. These symbols all pay for three of a kind or more with solid payouts, and they’re worth even more than they appear because they are scatters. We are a personally a fan of this approach because it increases the hit-rate for these bigger pays, which lowers the volatility and gives players better chances to win big.

Overall, The Wishing Cup video slot by Rival Gaming has everything that a player could really look for in terms of giving a ton of action. The scatters in particular are a great touch, and having expanding wilds on top of that gives players an even better hit-rate. This game has managed to stand out from a lot of other titles with a similar theme because of its excellent gameplay, and that’s why it’s one of the more popular titles that this company has available. It has a medium volatility overall with a very solid hit-rate and chances to win some pretty big prizes, and it caters to virtually every preferred play style out there because of the balanced pay table and approach to the features.