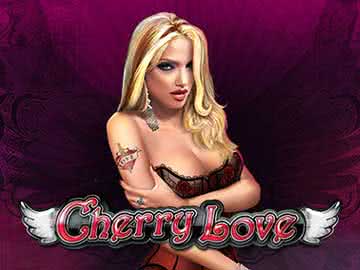 The Cherry Love online slot by Playtech is based on a fictional super model theme with 30 paylines and good features.

The Cherry Love online slot is an example of the latter. It’s based on a fictional super model that goes by the same name, and it has a bit of a dark feel to it to a certain degree. While there’s nothing explicit about the images or concepts used, it’s right on the edge of what you’d be comfortable with having your kids walk in and see you playing. This is actually a big part of the popularity of the game, and it’s not hard to imagine why that is.

Format and Layout of the Cherry Love Slot

The format for this slot gives you enough ways to win to be interesting without it being overwhelming. This comes by the way of 30 paylines that shoot across five reels and three rows of action. Action is definitely the operative word here, and you get so much action that the game has a medium level of volatility thanks to the value that congregates in the features and the top end of the pay table. 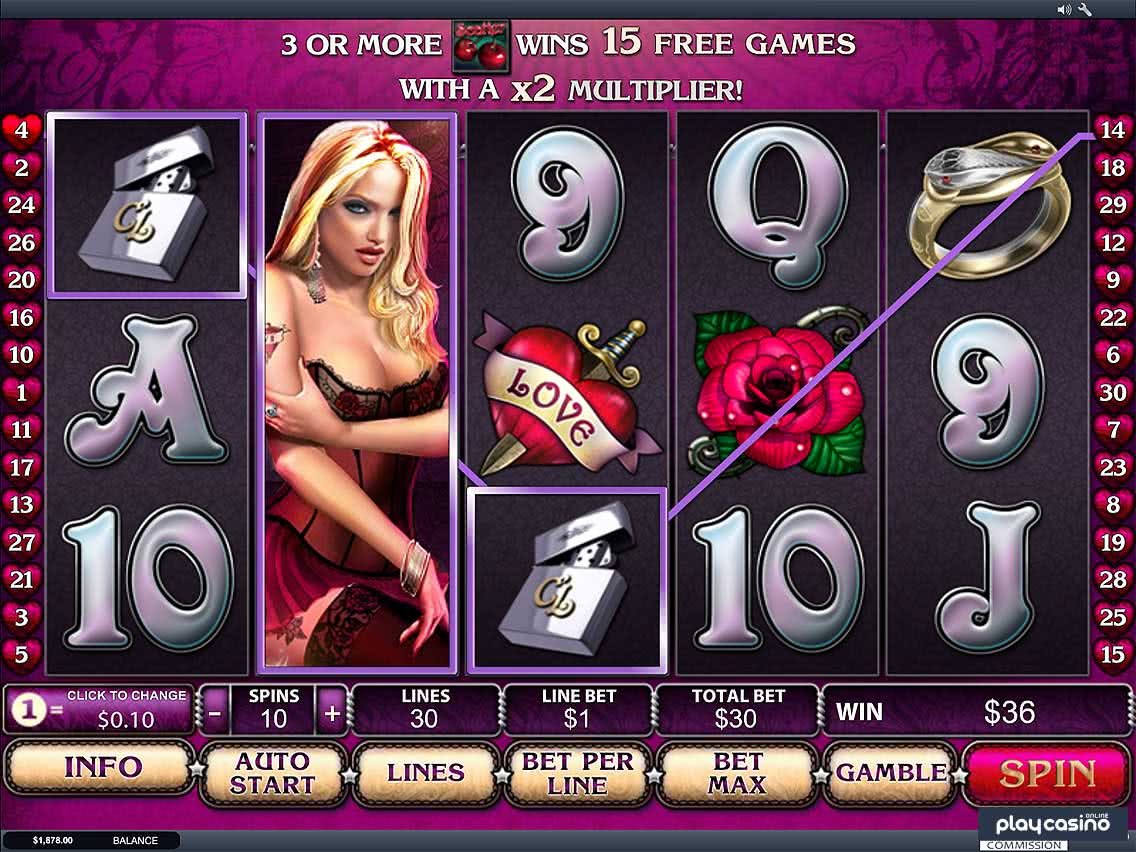 They have made betting pretty easy to handle in this game. The way it works is that you just pick how much you want to bet on each line, and you multiply that by 30 to get your total  wager. That’s about as simple as it gets, and your available coin sizes end up going from $0.01 to $1 each, so you can wager between $0.30 and $30 per spin. That’s a wide enough range to satisfy most players, so there’s no real issue there.

It makes sense that the Cherry Love video slot would be centered on the model herself, and that’s exactly what you get with the wild symbol. There are actually two different versions of this wild symbol as well. The first only shows her face, and it can show up anywhere on the game board.

However, there’s also an expanding wild that appears on the second, third and fourth reels sometimes. This shows Cherry in corset and stockings posing in a seductive way like a Victoria’s Secret model or something similar. This type of thing is a big part of why the game has the level of popularity it has, and the entire rest of the experience is centered around this type of mood. 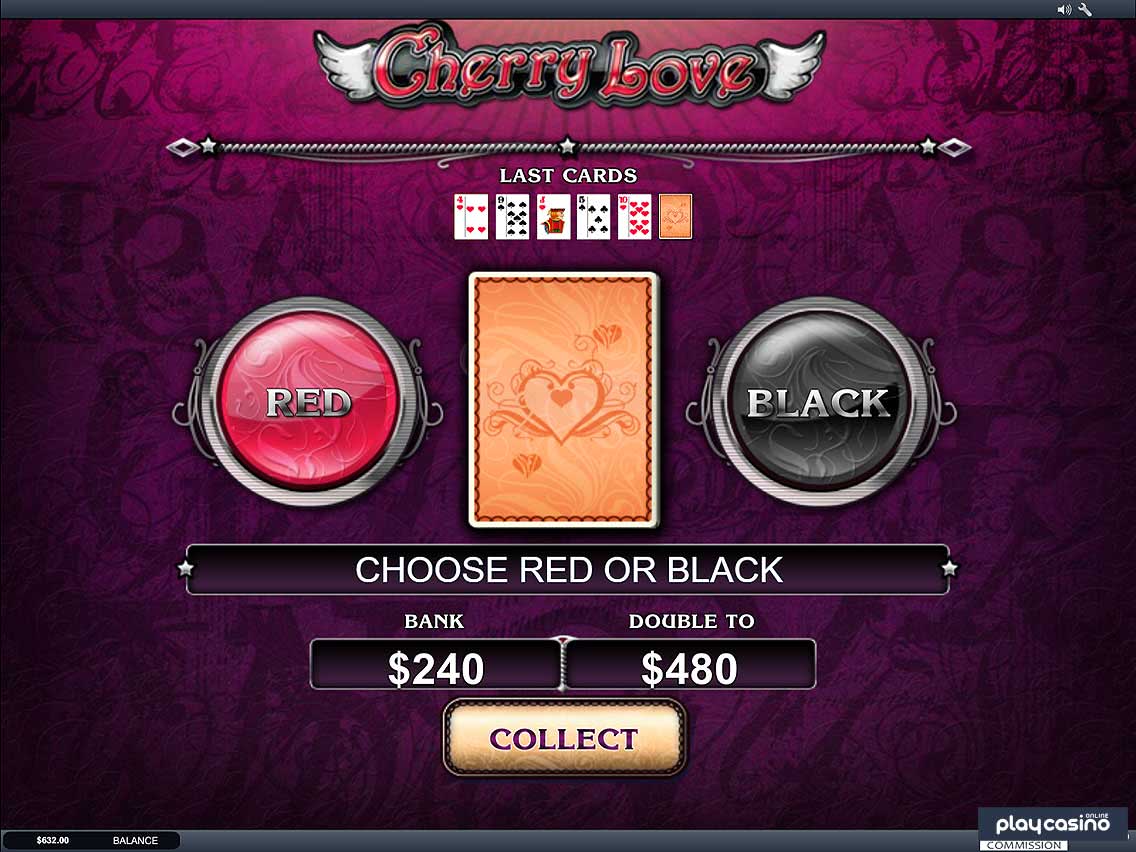 Along similar lines, and actually posing as a bit of a throwback to older styles of slots, there’s a cherry symbol that’s a scatter. It appears on all reels, and it pays out for two of a kind or more based on multiples of your entire wager. Five of a kind gets you a strong 200x win, which is the same as what a 6,000x line bet win would be, making it the single-largest payout that you can get in the entire Cherry Love online slot.

Four of a kind is worth 25x, which is a pretty nice payout itself. Three of a kind or two of a kind will get you 5x or 2x, respectively. Cherry the model and cherry the fruit are the most important symbols in this slot, which makes plenty of sense.

There is one main bonus round available in this game, and trying to get it will give you opportunities to run up some serious winnings. It’s triggered when you get at least three of the cherry scatter symbol on the reels, and it doesn’t matter where they are located. You’ll get 15 free spins regardless of how many scatters you used to launch the feature, and there are some major goodies to give you extra value in this bonus round.

The first thing to note is that all of your wins are given a 2x multiplier in this game mode. That doubles all of your wins, both for regular payline wins and scatter wins. The second thing you should know is that you get a guaranteed expanding wild on one of the three middle reels for each of the free spins, and that obviously makes hitting winning combos easier. Finally, you can re-trigger the feature an unlimited number of times by getting three or more of the cherry symbol to add another 15 free spins onto your total. 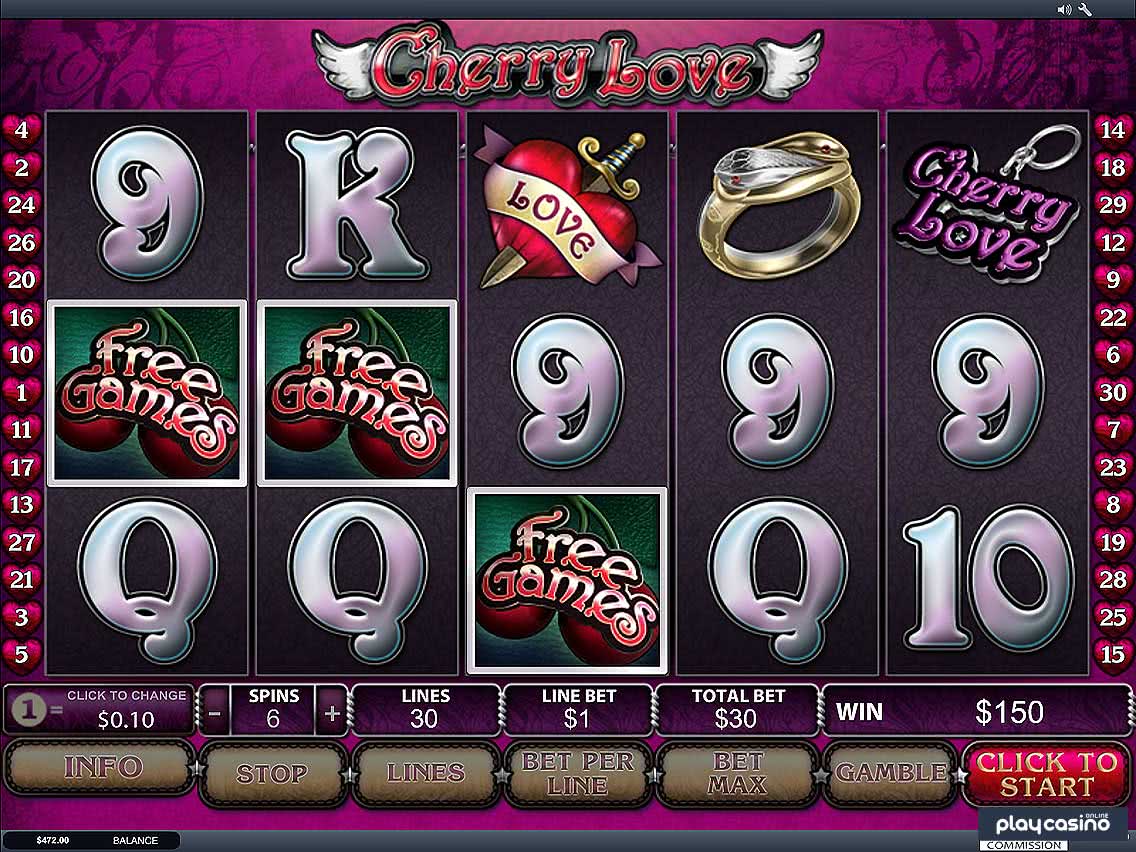 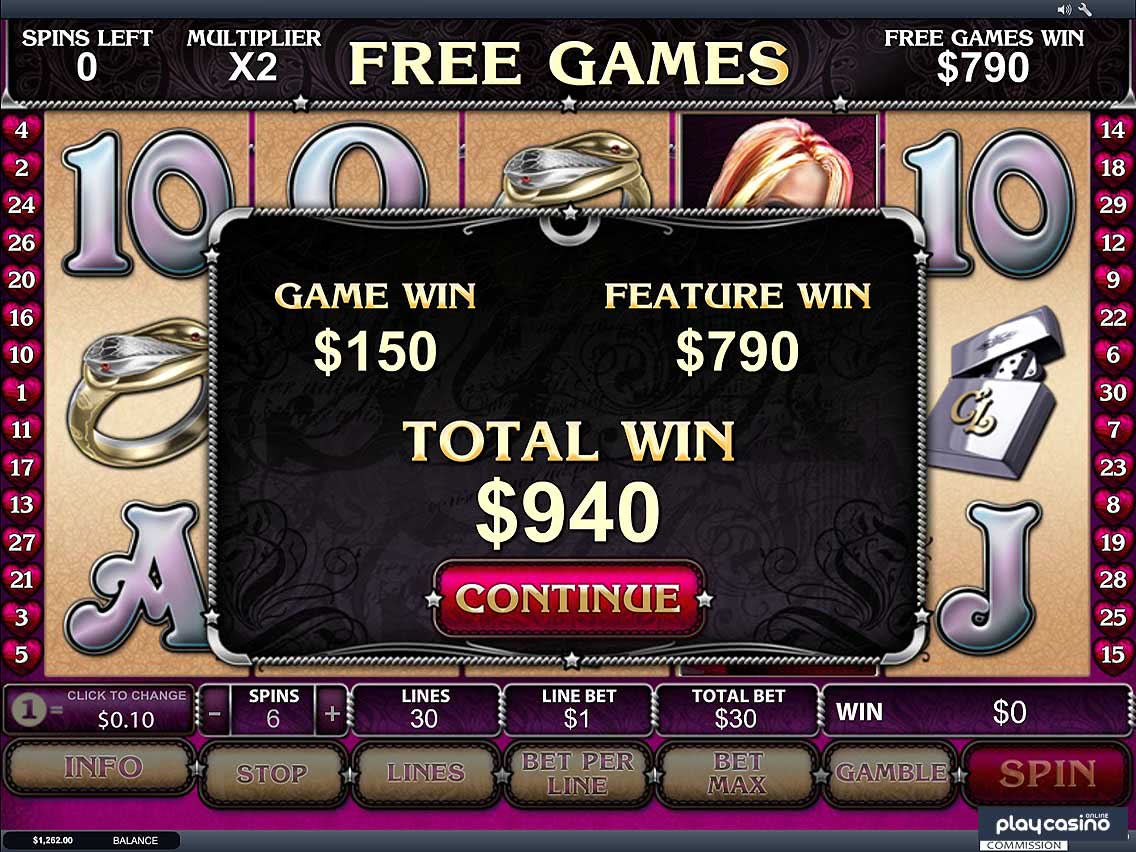 There are two big symbols that you will want to pay attention to the most aside from the wilds and scatters. The first is a rose, and it pays 4,000x for five of a kind. The second is the tattoo of a heart with a knife through it that says “love,” and it will give you a 2,000x win when you line up five of it on an activated payline. Something really important to note about these two symbols in particular is that you only need two of them to making a winning combination.

Next up is the ring symbol, and it’ll give you a 750x win for five. Five of the Cherry Love online slot lighter pays out 500x too. These are decent mid-range wins. 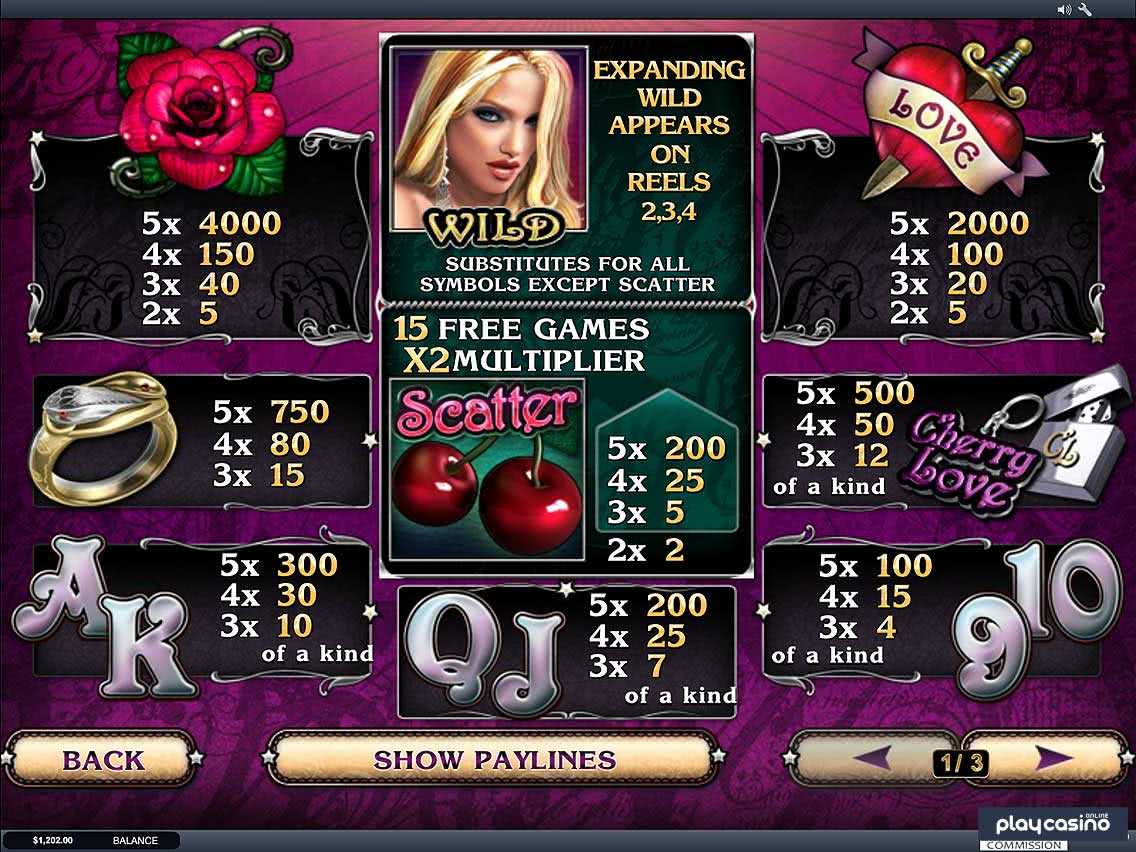 Playtech decided to use card rank symbols for the lower level pays in this game, but they weren’t lazy about it at all. Instead, the letters are in the same font as the logo for the game, and they have some pretty solid payouts.

The A or K will pay out 300x for five, and that’s one of the top pays we’ve ever seen for five of a card rank symbol. It drops down to the 200x level when you get five of the Q or J on a payline. Finally, the lowest wins come from getting five of the 10 or 9, and that payout is 100x, which still isn’t bad for card rank symbols.

Playtech did a solid job with the Cherry Love online slot’s graphics, and they didn’t put all of the emphasis on the girl herself, which is something they could have done. Instead, they made the whole game look great, and they paired that up with very nice, action-packed gameplay. This combination has helped this slot to stay popular among all different kinds of players. It has stood the test of time, and there are still tons of people who enjoy playing it now because it gives you lots of different ways to win significant payouts from the regular pay table and from the bonus feature.