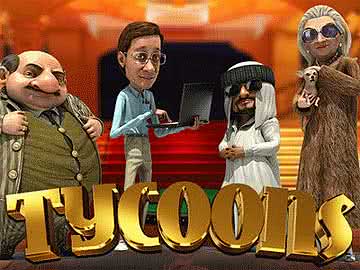 Tycoons is a 30-payline slot by BetSoft that features major power brokers from all over the world in a poker game.

It’s generally understood that there is a limited number of people who exert the most control over things on a global scale, and these people are the source of the Tycoons slot by BetSoft. This game features a number of different tycoons from different parts of the world, and as a part of BetSoft’s Slots3 line of titles, it has tremendous 3D graphics that are widely regarded as up there with the best that the industry has to offer overall. Packed with features, the gameplay is also nice on this slot as well.

Format of the Tycoons Slot

This online slot has five reels and three rows along with 30 paylines. This particular format is used by BetSoft more than probably any other provider out there, and they also have a pattern of having a $0.02 minimum coin size in these games. This corresponds to a minimum overall wager of $0.60 per turn. Players can bet up to five coins per payline for a 150-coin maximum bet, and at $0.50 apiece for the largest available coin sizes, that puts the highest bet size available at $75 per turn.

We want to point out that players have the option to play with fewer than the maximum number of 30 paylines. We strongly recommend against this. If you play with fewer than 30, then not only can you not qualify for the progressive jackpot, but your return-to-player percentage will take a hit and be lower overall. If you really want a smaller bet size, then it’s much better for you to choose a lower coin value instead. 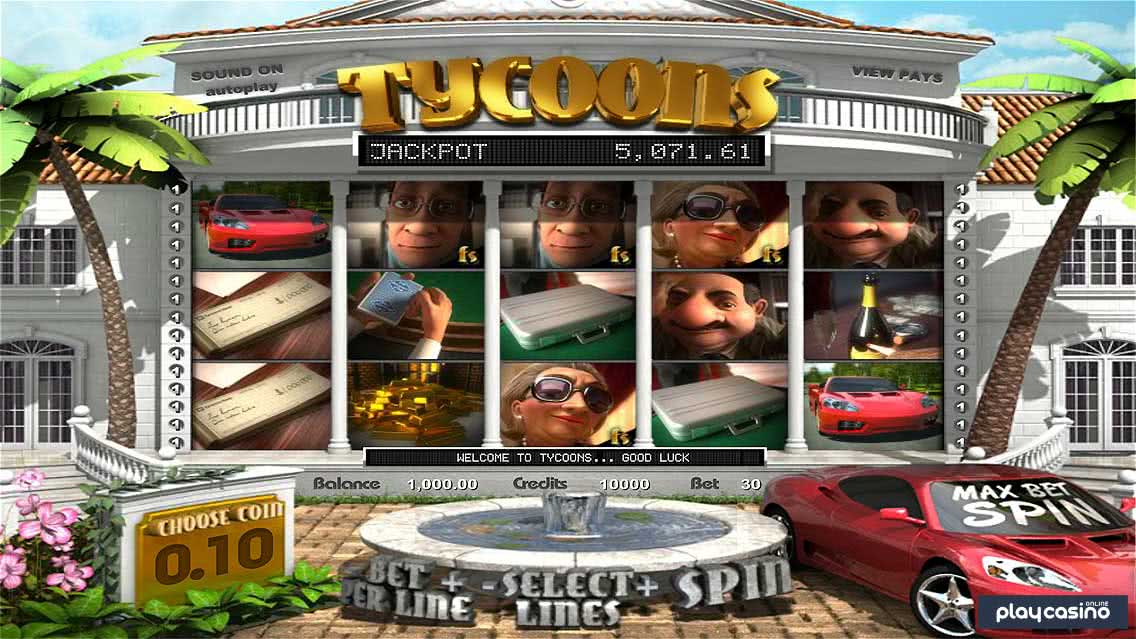 In the Tycoons online slot, the free spins are awarded a little differently than what you’ve probably seen in the vast majority of games before. There’s a small “FS” symbol that can appear in the bottom-right corner of random character symbols. If you get a winning combination of at least three of a character symbol while holding the “FS” symbol, then you’ll get a set of free spins.

There are two extras that are added in to the free spins to give you more value that you would typically get. First off, one of the middle three reels is selected to be wild at random for the entire length of the feature. Second, all of the winning combinations for the characters will have their prizes doubled in value. This is obviously worth quite a bit overall because these count for the largest regular payouts in the entire game.

Whenever you have more money than you know what to do with, people will give you credit almost anywhere. During the Instant Credit bonus feature, you’ll get credit in the form of extra payouts directly to your account balance. If you get the gold bar, the money clip and the check note in any order on any of the first three paylines, then you’ll be given a play at this bonus round.

The way the Instant Credit feature works in the Tycoons online slot is that players will pick one of the three symbols to pick a random win. That payout is given to you immediately, and then your play will continue without slowing you down. This helps you to get a great win without preventing you from getting as much play as possible during your sessions. 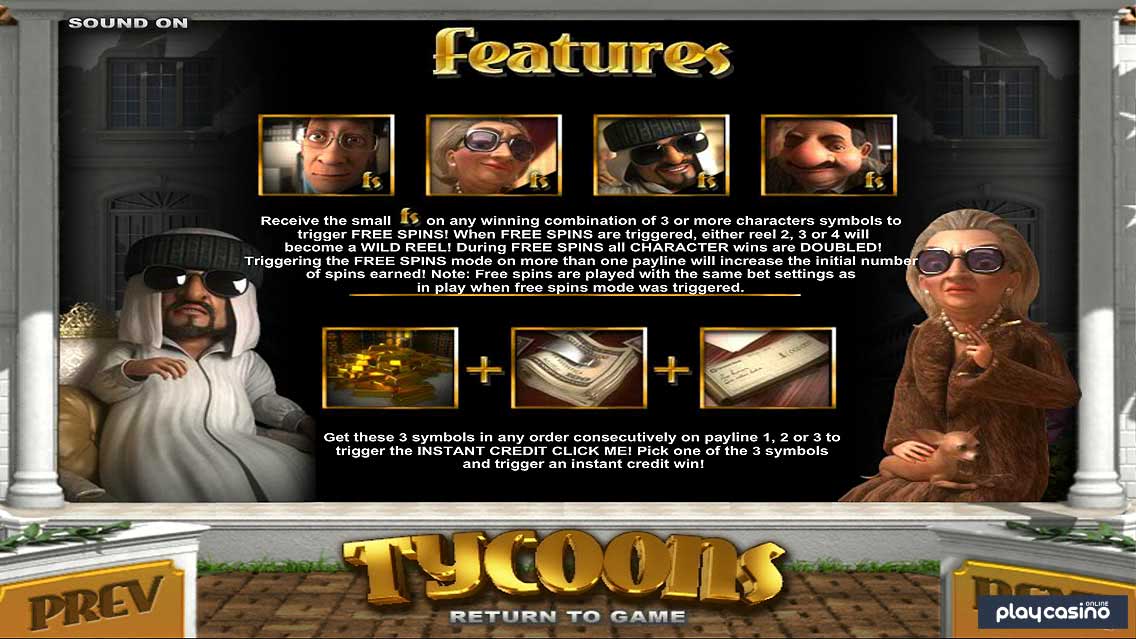 There’s a symbol with the hands of a poker dealer dealing cards, and that is a scattered bonus symbol in this game. You’ll see the four tycoon characters sitting at a poker table (along with a dealer, because tycoons obviously don’t deal their own games). You pick one of the four tycoons that you think will win, and the hand will play out. If your chosen character wins, you’ll get a pretty good payout. If he or she does not win, then you’ll still pick up a small prize.

The largest payout that you can get in the Tycoons slot is the progressive. You’ll need to bet with five coins per payline with all paylines activated to qualify for this jackpot. The symbol in question is the grey briefcase, and five of a kind on a payline when these conditions are met will pay out the progressive. This is a cool way to win a tremendous amount of money in a single spin, and because you can qualify for this jackpot with even $0.02 coin sizes, it’s a balanced affair for every player. 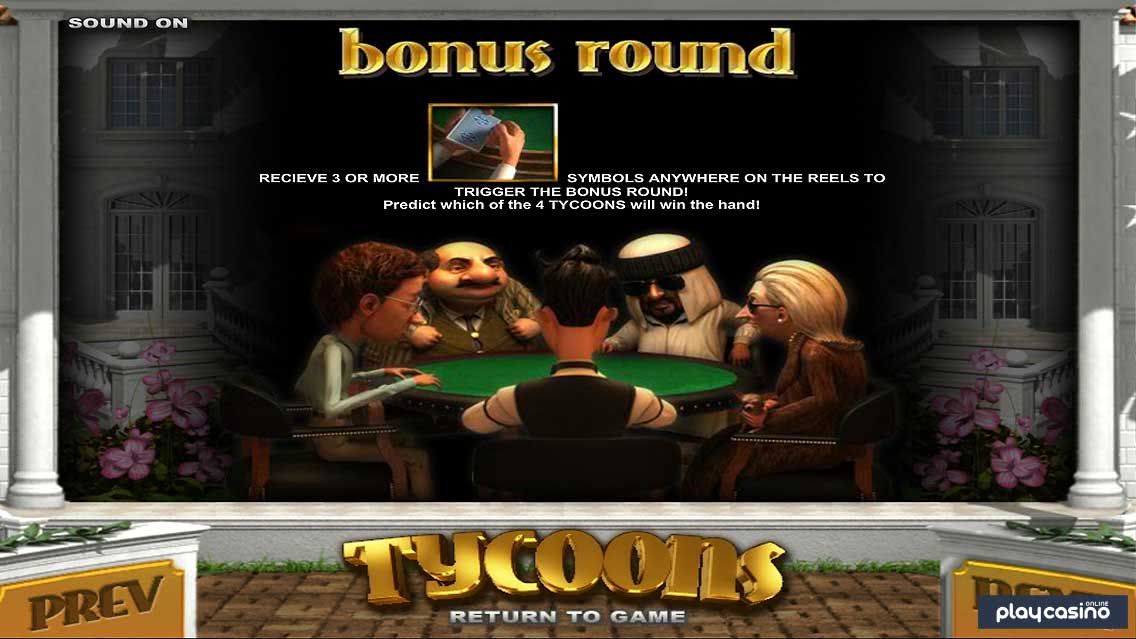 The four tycoon characters are responsible for all of the other largest wins in this slot. The man with the glasses will get you a win of 500x for five of a kind, and it’s worth 300x to pick up five of the woman in sunglasses as well. Five of the Sheik gets 200x, and five of the very round banker pays 150x.

All four of these characters will win for two of a kind or more on an activated payline. Their wins are pretty balanced, and they are a part of the reason why this game has a limited volatility in spite of having a progressive jackpot and multiple bonus features. 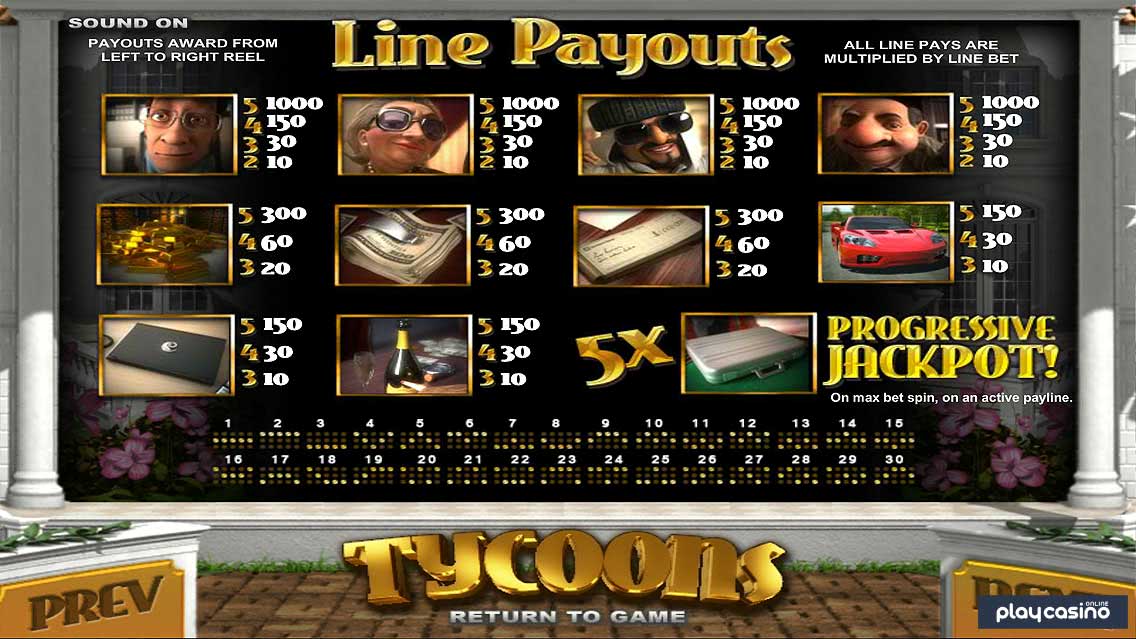 Tycoons is an excellent online slot that is seen as a staple from BetSoft’s collection. It has four characters who resemble certain figures from real life, and it also has several different symbols that are associated with wealth in different ways. Add in the progressive jackpot and value-packed features, and you have a great experience for players who want their shot at taking down some huge payouts.

From a gameplay perspective, this slot has a medium volatility and a high hit-rate, and that means that you’ll have opportunities to hit big pays while still maintaining plenty of small and medium wins that will help to keep your bankroll up while you go after the features and largest payouts in the game. This style of gameplay has a tremendous amount of appeal to a wide range of players, and it’s a big part of why the Tycoons video slot has remained so popular over the years.